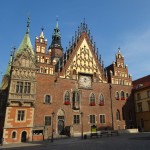 Entering Wrocław’s Rynek, or old market square, is a jaw-dropping experience. Its gothic town hall is an architectural masterpiece. Surrounded by a colorful plethora of citizens’ houses, filled with restaurants and strolling multitudes, the Rynek is a perfect square for rubbernecking. I immediately wish I had longer to visit. Wrocław has been designated a European Capital of Culture for 2016. I say don’t wait. Go now.

European Capital of Culture is a city designated by the European Union for one year during which it organizes a series of cultural events with a strong European flavor. It promotes a city; Wrocław warrants the recognition. But this city is not just another pretty facade. Destinations are much more interesting when I know something of their history. Wrocław is no exception.

First, apologies to Wrocław for my numerous mispronunciations. As with many Polish names, it is pronounced very different (Vrotswaf) than it looks. 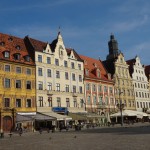 Wrocław, the capital of Silesia, was a well-known city as early as 1025. At the crossroads of east and west Europe, every Duke, Emperor, and Chancellor wanted the city. Through the course of history it has existed under five names and been ruled by four countries. Since 1242 it was known by the Bohemian name of Breslau.

Breslau changed hands from Bohemia to the Kingdom of Poland, was burned in order to force the Mongols out after their 1241 invasion, and by 1335 was again within Bohemia (then a part of the Holy Roman Empire). In the following centuries German settlers became the dominant ethnic group. More devastating fires, passing into and out of the Hanseatic League, one major earthquake, and in 1518 the Protestant Reformation reached Breslau, at the time ruled by the Catholic Hapsburgs. In 1618 the Bohemians revolted in support of religious freedom and the ensuing Thirty Years’ War devastated the city which was occupied by rampaging Saxon and Swedish troops and lost thousands to the plague. The Counter-Reformation may have encourage Catholicism elsewhere but Breslau was one of the only Silesian cities to remain protestant. In 1742 Austria’s Maria Teresa ceded Breslau to Prussia and symbolically put the kiss of death on the horrible fate lying ahead for Breslau.

During the Napoleonic wars Breslau became the center of a German liberation movement against Napoleon. In fact, it was in Breslau’s Palace where Frederick Wilhelm II designed the Iron Cross. The 1871 unification of Germany saw Breslau as the sixth largest city in the German Empire and its power and influence continued to grow, even though there were some sparks of Polish individualism. By World War II Breslau was the largest city in Germany east of Berlin. 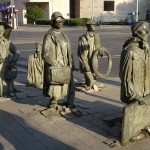 Known as a stronghold of left-wing liberalism, Breslau was one of the strongest Nazi supporters and in the 1932 election 44% of its citizens’ voted the Nazi Party, third highest total in all of Germany. It wasn’t long before political enemies were being murdered and Breslau’s Jews and undesirables sent to concentration camps. For most of World War II the fighting did not affect Breslau as it was out of range of allied bombing. There was a Polish resistance movement credited with smuggling vital information on German rocket development to Allies. Breslau’s population swelled to over a million with refugees and retreating soldiers. By early 1945 the Soviet Red Army approached the city.

Hitler had declared Breslau a fortress to be held at all costs. Commandant Hanke and his death squads shot defeatists and those who attempted to flee. The city was in chaos. A ludicrously ill-equipped force of boys and retreating regiments with a couple tanks faced the fury of the oncoming Red Army. Hanke refused to evacuate civilians until too late. An estimated 100,000 civilians froze to death attempting to flee on foot and more than 70% of the city was destroyed from Soviet shelling and because of Hanke’s orders to tear down entire streets of buildings for the bricks. Even the university’s books were used. The fighting deteriorated into hand to hand battle with Hanke surrendering just days before the end of the war. Hanke fled the city. For survivors, the horror continued as Soviet troops rampaged thru Breslau. It is thought at least 170k civilians died and the city was in ruins as a result of the 80-day Siege of Breslau.

No memorial stands for the dead of the Siege of Breslau.

During treaty negotiations, Russia insisted Breslau become part of Poland. Polish Wrocław was officially born. At the end of WWII it was estimated as few as 17k Poles and as many as 200-300k Germans lived in the city. Efforts began to de-Germanize the city through forced relocations and by 1948 Wrocław was declared German-free. Massive resettlement of Poles from the east moved in to fill the void. 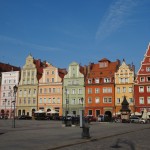 I must remember the Rynek I see was rebuilt since the 1960s by these new immigrants into Wrocław, using the bricks from the fortifications and replicating as exactly as possible the square I admire today. This medieval market square was originally laid out in 1241. One of the largest squares in Europe, its dark-red brick town hall dates to the late 13th century and is a marvel of architecture. Over the course of 250 years it was decorated with an eclectic mix of embellishments from early gothic, early renaissance, and baroque styles. The ornate loggias, bay windows, 1615 baroque portal, and carved stone figures all have their own story and history. It’s still accurate astronomical clock dates to 1580. Gothic interiors and its great hall are also impressive.

From gothic to renaissance to art nouveau, colorful citizens’ houses line all sides of the square. Each has its own history. Originally known by symbols rather than an address, houses like Under the Golden Dog and Under the Golden Eagle are painted in bright pastel colors. Several loops around the square allow for spotting unique design and decorations. Like others, I rub the tongue of the bear for good luck. I  also pick the perfect spot for dinner.

Adjacent Solny Square displays almost as impressive architecture with elaborate reliefs and figurines bursting from the facades. It has a darker past where Jews were persecuted. Now it hosts a flower market. 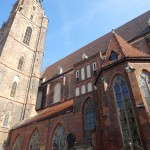 Eleven streets lead from the market and each holds interesting sights. Close by is St. Elizabeth’s Church, a huge brick gothic structure. A church has stood on this sight since the 12th century; this one was built in the 14th century. Destroyed many times, the outside facade is tired but the interior is beautiful. Priceless gothic and renaissance alters brighten the church and countless tombs lay about the naves. It’s soaring 300′ tower is the tallest structure in the area but still 100′ shorter than the original.

Down another street is the baroque Royal Palace. Purchased in 1750 by Frederick the Great of Prussia, the palace was converted into a royal residence for the Prussian Hollernzollens. It now houses the City Museum which traces 1000 years of history. It was here, in the royal apartments, where the Iron Cross was designed.

Tumski Most leads to Ostro Tumski or Cathedral Island. This iron bridge was built in 1890 and is lined with the symbolic locks of newlywed couples signifying inseparable love. Such bridges are now found worldwide. There is hardly an open inch of space left on this bridge and I am reminded of a similar bridge which just collapsed from the weight of its locks in Paris. 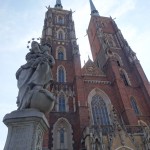 Cathedral Island is the oldest part of the city. The first church on the island was built in the 9th century. In 1315 Cathedral Island was sold to the church. Dominating the island is St. John the Baptist Cathedral. Elegant double spires, peaked copper-topped towers and domes create a beautiful roofline. An elaborate medieval portal marks entry into the fourth church built on this sight. St. John was begun in 1244 and is the first brick church in Poland, its elaboration and expansion continuing for 5 centuries. Centerpiece of its rich gothic interior is its priceless painted altarpiece and what was once the largest organ in the world.

The Botanical Gardens behind the cathedral are restorative and make for a cool break in a hot day. The gardens are well maintained and offer ponds, numerous bridges, and dwarfs. 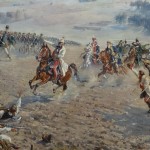 Kościuszko and the Battle of Racławice panorama

Racławice Battle Panorama is not a visit but a pilgrimage. Racławice is a village located a few miles north of Kraków. It became famous after the victorious Battle of Racławice in the Kościuszko Uprising. A 590′ painted panorama authentically depicts the 1794 battle of Racławice between an overwhelming Russian force and Polish insurgents wielding sickles led by Tadeuze Kościuszko. They won the battle but the uprising failed. The battle instilled pride and hope within the hearts of Poles everywhere, and made a national hero of Kościuszko, whose heart rests in Wawel Castle in Kraków.

Kościuszko is also known to America. In 1776, Kościuszko moved to North America, where he took part in the American Revolutionary War as a colonel in the Continental Army. An accomplished military architect, he designed and oversaw the construction of state-of-the-art fortifications, including those at West Point. In 1783, in recognition of his services, the Continental Congress promoted him to brigadier general. He appears on the 1933 5¢ stamp. And some relatives of mine live in Kościuszko County, Indiana.

Found in the park behind the Racławice Panorama, Partisan Hill is a neglected piece of real estate filled with weeds, broken bottles and graffiti. It was used by the Nazis as a last stand in the Siege of Wrocław. Perhaps this is a part of history wished to be forgotten. But it would be an ideal spot for a memorial to those who died. 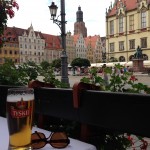 Polish beer with a view

Wrocław is a fun, walkable city. Adding to its festive atmosphere are the little 8-10″ bronze dwarfs found throughout the city. These happy fellows pop up everywhere along the streets, up trees, and atop lampposts. Involved in everyday activities ranging from making music, enjoying the flowers, and withdrawing Złoties from the ATM, they are cute and imaginative. I am sure they would approve of my sitting at one of the cafés around the Rynek and enjoying a cold, Polish Żywiec, Okocim or Tyskie.