I have walked more than 150 miles of Poland, enjoying its art, architecture, museums, fortresses and churches, and learning more of Poland’s history. My last days in Poland will be touring Warsaw or Varsava as the Warszawian’s pronounce the city. The city’s harrowing story is one of death and destruction, uprisings and resilience, pride and rebuilding. A story of a city and its citizens rising from the ashes of war. A story of its Jews. A story written in its art, photos, films, music, architecture, and in the streets of Warsaw.

I walk The Royal Way, a route of Polish kings. This path follows the long street of Nowy Świat to the Royal Castle and Old Town Market Square. Nowy Świat is busy and modern, filled with upscale shopping and restaurants. Nothing like what I have strolled in other Polish cities.

I begin at the Palm Tree – the busy intersection of Aleje Jerozolimskie (Jerusalem Avenue) and Nowy Świat (New World). The palm leaves came from California, the idea from a local artist who thought the street should have a palm tree, like the city of Jerusalem. Less controversial is the statue of Charles DeGaulle across the street, honored for his support of Warsaw after the war. And down the street from the old Communist party headquarters is the Three Crosses Church, an 1818 neoclassical rotunda church dedicated to Czar Alexander I (he presented the first constitution to the Kingdom to Poland). 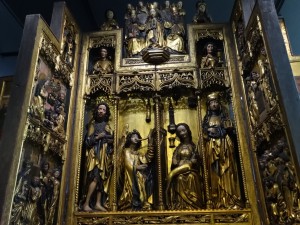 1480 polyptych from St. Elizabeth’s in Wrocław.

On another corner is the National Museum. It hosts an excellent selection of Polish artists. Jan Matejko, 1838-1893, is Polands most beloved, and important, painter. An entire room is dedicated to Matejko’s paintings and each tells of Poland’s history in graphic, colorful detail. Poland’s school children learn their history lessons using books illustrated with Matejko’s paintings. Many of his works are on a grand scale, such as his famous “Battle of Grunwald” the successful battle of Poles and Lithuanians over the Teutonic Knights in 1410. It took three years to paint the 450 sq. ft. canvas. Another section of the museum contains the Young Poland Collection. Many young Polish artists, some the disciples of Matejko, are represent, including Wyspiański, Mehoffer, and the only female, Olga Boznańska. A fine collection by foreign artists fills the older section of the museum. Also not to be missed are the rooms filled with the gorgeous painted and gilded wood polyptychs from the churches of Poland. 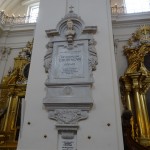 Chopin’s heart rests in Church of the Holy Cross

If you love music and Frédéric Chopin, his museum is a slight detour off Nowy Świat. I can follow Chopin’s life, loves, and music via his manuscripts and letters. On display are his piano, death mask and personal items. Multi-media exhibits and sophisticated sound systems enable me to listen to his compositions. It is a tribute to the great composer who grew up in Warsaw. He died in France but requested his heart return to Warsaw. His sister Ludwika brought Chopin’s heart back to Poland and it is entombed in one of the columns of the Holy Cross Church on Nowy Świat. Today, a Saturday, this church, and most others in the city, hosts a wedding. Bride and groom leave in horse-drawn carriages for a grand parade through Old Town while I contemplate Chopin and his contribution to music.

Along Nowy Świat are numerous statues of favorite ‘homeboys’ from Nicolaus Copernicus (the statue was stolen by the Nazis but since has been returned); Adam Mickiewicz, Poland’s national poet and site of high school students’ frivolity before their finals; and Cardinal Wyszynski who was head of the Catholic Church under Communism. The equestrian statue of Prince Józef Poniatowski in front of the Radziwiłł Palace is a copy of the one deliberately destroyed by the Nazis. This copy was made from the original mold and financed by the Danish people. Everything has its story. 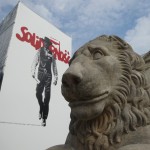 Along the street are cityscapes by the Italian artist Canaletto (Giovanni Canal). If not for Canaletto, reconstructed Warsaw might look very different. It was by using Canaletto’s paintings of Warsaw’s churches, streets and castle that the city could be accurately rebuilt after the devastating WW2 bombings. A room of his paintings can be seen in the Royal Castle.

At the end of the street is the University of Warsaw, opened in 1816. It was once surrounded by aristocratic palaces like the Radziwiłł Palace where the 1955 Warsaw Pact was signed.

A short walk west of Nowy Świat is Piłsudski Square. A statue of Józef Piłsudski honors the general who forced the Bolsheviks from Poland in 1920. He is credited with creating an independent Poland, acting as its rather dictatorial First Marshall, and led the Second Polish Republic after WW1 until 1935. (His contributions are well told in a temporary exhibit of the Museum of History of Polish Jews.) His statue faces Piłsudski Square, used for protests and important events, including Papal visits.

At the opposite end of Piłsudski Square is the Tomb of the Unknown Soldier. The tomb is under a surviving colonnade of the Saxon Palace. In the early 19th century, the Palace housed the Warsaw Lyceum in which Frédéric Chopin’s father taught French and lived with his family on the palace grounds. During the 1939 invasion of Poland, the building was slightly damaged by German aerial bombing, but it was quickly rebuilt and seized by the Nazis. After the Warsaw Rising, in December 1944, the palace was completely demolished. Only part of the central colonnade, now sheltering the Tomb, was preserved. Upon its walls are tablets listing names of Polish battles and within the urns is soil from battlegrounds where Poles fought and died. The changing of the guards at the tomb is dignified, short and simple.

Behind the Tomb are the lovely Saxon Gardens, the oldest public park in Warsaw. Founded in the late 17th century, it was opened to the public in 1727 as one of the first publicly accessible parks in the world. Numerous paths wind under trees, around fountains, ponds and rococo sculptures.

Returning to the Royal Way, I finally enter the atmosphere and architecture of an historic Old Town. I remind myself that in 1945 not a building was left standing. Years of painstaking reconstruction allows me to see this historic area lovingly rebuilt to its old-world charm thanks to old photos and Canaletto’s paintings. Anything that is original is because citizens secreted it away to the countryside hiding it from the Nazis.

St. Anne’s Church, adjacent to Castle Square, is a neoclassical style building and unchanged since 1788. A church has been on this site since 1454. Midst another wedding, I can enjoy a rococo and high baroque interior filled with frescos and a rare diamond vault ceiling. During the Warsaw Uprising of 1794, its bishop was viewed a traitor to the nation and hung in the square out front.

Castle Square is dominated by the large salmon-colored Royal Castle, serving as the Polish king’s residence and place of Parliament since the 14th c. When the Jagiellonian dynasty died off (the first was the Lithuanian Duke and Queen Jadwiga who defeated the Teutonic Knights) the power of government fell to the Republic of Nobles who stubbornly insisted on electing only foreign kings. In 1596 the capital was moved from Kraków to Warsaw and into the Royal Castle. Once enclosing the entire city, parts of the Castle’s defensive walls remain. 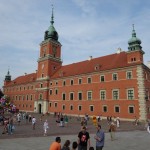 The Castle interior is opulent and much of it original, thanks to citizens hiding away what they could before the Germans destroyed Warsaw. The royal apartments include ornate public state rooms and private apartments lavish with marble, frescoes, portraits, crests, tapestries, and chandeliers. In the throne room, Poland’s symbol, the crowned eagle, went crownless under the Communists. Since their hasty departure, all crowns have been replaced. The Canaletto room contains a score of panoramic paintings of old Warsaw with which the restoration of Warsaw was aided. The Grand Senator’s Chamber is decorated with coats of arms representing regions of Poland during its Golden Age stretching from the Baltic to the Black Sea. In this room, in 1791, Poland’s first constitution was adopted, the first constitution in Europe. (Unfortunately this progressive constitution was never applied as the partition of Poland began by 1793 and Poland disappeared from the maps of the world until 1918). There is also an extensive collection of tapestries on display next door in the Tin-Roofed Palace.

Just up the street is Old Town Market Square surrounded by beautiful bürgher houses and with its iconic statue of the mermaid modeled after a female paramedic shot during the Warsaw Rising.

Churches in old town are numerous, such as St. Martin’s established in 1353. This church suffered total destruction by German bombs during the Warsaw Rising, all except a fragment of the crucifix. The interior of baroque and rococo styles was replaced with a modern baroque. The nearby Cathedral of St. John the Baptist is the oldest and most important church in Warsaw. Built in 1339, Poland’s constitution was consecrated here in 1791. In 1944 a German unmanned tank named Goliath was driven into the church and intentionally exploded killing the insurgents inside, a final retaliation to the Rising. On the alter is a copy of the Black Madonna of Częstochowa (the original is regarded the most popular shrine in Poland).

Around a corner is another martyr of the Rising which honors the children who acted as messengers for the rebels. The Little Upriser is along the city walls of the Barbakan fortress. Wearing a large helmet, too big boots, and carrying a machine gun, children held their own place of honor during the time of Nazi terror.

Following brick walls and crossing a bridge, I enter the Barbakan and New Town. New in name only as it is from the 15th c. but also destroyed in the war and rebuilt. Here is the birthplace and museum of Madam Curie. The 1688 church of St. Kazimierz with its distinctive green dome was the site of a 1944 Nazi raid where 4 priest, 35 nuns and more than 1000 civilians sheltering in its crypt were killed. The church was destroyed. Behind St. Kazimierz is the brick gothic church of St. Mary, built 1409. During WW2 it also was bombed. Then come the banks of the Vistula with its cool breezes and views of parks, fountains, and Warsaw’s new-age National Stadium. 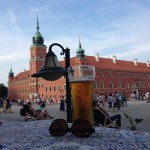 This day has been about historic Warsaw. Tomorrow, I will visit a more recent history and learn about its devastating effects. I remind myself, everything that I have seen today stood in ruins in 1945 – everything! I will visit the Warsaw resistance fighters and Jewish Warsaw, its monuments, ghetto, cemeteries and museums. The Little Upriser only hints at this story. Tomorrow, I will learn about Warsaw Rising!