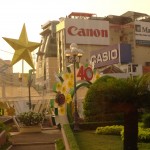 Sài Gòn – Communist on paper but at heart a Capitalist

I arrive in what is known by even the Vietnamese as Sài Gòn. I admit I am shocked. The parks, busy shopping streets, tall skyscrapers, familiar brand names, and business complexes are not what I expected. This great city of South Vietnam, “liberated” by the North Vietnamese and Viet Cong” in 1975, is much the same as any large American city. America may have fled Vietnam in 1973, but we are back in spirit by way of Pepsi, Barbie, Carl’s Jr., Budweiser, McDonalds and IPhones. 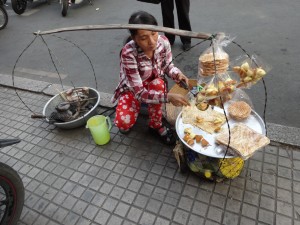 Downtown, very close to the closed  American embassy and Presidential Palace, the parks are filled with people enjoying the cooling temperatures. The bustle of the streets is typical of any international city. Architecture is a mix of socialist boxy, French colonial, and new-age glass and steel. Some of the most interesting architecture are the very thin 4-5 story buildings sandwiched between high rises, seemingly 15-20 feet wide.

Notre-Dame Basilica is in the main square and quite plain inside. The mass is being given to a large crowd in Vietnamese. Across the street is the newly painted bright mustard yellow Central Post Office. Of a neoclassical architectural style, it was designed and constructed by architect Gustave Eiffel in 1886. These historic buildings are slowly being encircled by high rises and luxury shopping.

I was told by our guide that everyone calls the city Sài Gòn but admits it is unlikely it will ever be named other than Ho Chi Minh City. Vietnamese have high respect for Ho Chi Minh and his likeness can be seen everywhere in parks, building, and on propaganda posters and billboards around Việt Nam. 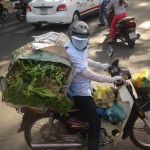 With a wave of the hand, which stops the oncoming deluge of traffic, we cross the busy streets, gaining the opposite side alive and invigorated. There is more honking of horns here and it seems they may be less apt to dodge you so it’s best you dodge them. Either way, streets are filled with the noise of thousands of buzzing motorbikes.

This is the city whose story is so well told in “Last Days in Vietnam,” Rory Kennedy’s 2014 documentary about the fall of Việt Nam and the American’s chaotic evacuation of Sài Gòn. The preceding years were a war of Vietnamese nationalism, and the French and American interventions were seen by most Vietnamese as last stands of colonialism rather than as an effort to stop Russian expansion into Southeast Asia. However it is seen, by either side, it was a devastating and heart-wrenching time for American involvement in this region.

There are many reminders of the chaos of that time as seen on our nightly news. Passing the apartment building at 22 Lý Tự Trọng Street one is reminded of the evacuation of CIA personnel and civilians by Air America from its rooftop on April 29 as the North Vietnamese were entering the city. And reminded of the unpleasant reality of those friends left behind to face the brutality of the Communist “liberators.”

When I visit the Presidential Palace, now called the Reunification Palace, which was the residence of the presidents of South Vietnam before 1975, I am reminded of the photos of tanks smashing down Palace gates. Atop the Palace, the beautiful flag of South Vietnam, yellow with three red stripes and adopted for the first time in 1890, was pulled down to be replaced with a red flag with its one star in the middle. The Palace is a simple, principally glass structure, airy and bright, open to the sounds of the people, not meant to be stormed by tanks and guns.

I empathize with the chaos and tragedy of the early 70’s as I travel out of this vibrant city into the northern suburbs, past Sài Gòn Airport and the Tân Sơn Nhứt Air Base, last American strongholds until surrounded and overwhelmed by an enemy they could not see nor defeat. And just past these airports, I get the opportunity to see why this war was so horrible for so many – on both sides of the conflict. 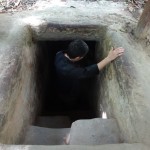 I arrive at the Củ Chi Tunnels – the Viet Cong’s underground tunnel system, developed to survive and evade American bombers and ground military. Although the allies of South Vietnam and America held Saigon and environs by day, it was the Viet soldier crawling out of these tunnels that dominated the roads and villages at night. Tunnels stretched as far as the Cambodian border, a network of over 130 miles in the Củ Chi district alone (some dug under the American-held Tân Sơn Nhứt Air Base). The tunnel system is three stories deep with the bottom story around 30 feet below what is rock hard clay. There are trapdoors, broad living areas, storage facilities, weapons factories, field hospitals, command centers and kitchens – all underground! This dug by men and women with tiny shovels made from scrap iron salvaged from the bombs that were dropped.

Displays of the various traps and strategies used by the Viet Cong are on display. I sense a certain satisfaction by the military-clad person as he triggers the trap doors and demonstrates the various use of bamboo and metal spikes.

Rubber sandals were asset to scoot along in low, narrow tunnels

I am able to crawl thru a portion of a tunnel. It is narrow, my shoulders scrape the sides. I must stoop double and shuffle around turns. Tunnels can be very hot and oxygen is limited. Not a place for any human let alone someone over a hundred pounds. And I am told the tunnels were broadened here for the tourists. How terrifying for a soldier to enter these tunnels, face dead ends, booby traps, the heat, the enemy and claustrophobia. I was told the infamous sandals made of rubber were perfect for the tunnels, the soldier’s boot a disadvantage. The sound of AK47s can be heard through the jungle as the site offers a firing range. All of this is surreal.

But, the pièce de résistance is a 1967 black and white propaganda film of the sainted men and women fighting the evil empire of America. They “eagerly” joined the North Vietnamese to liberate Việt Nam from the Americans. The faces of the smiling soldiers awarded medals of merit as honored “killer of Americans” is a bit hard to stomach. The truth of the war is disturbing enough, further brainwashing of the population is unnecessary. But then there is no freedom of the press here. And, spouting all the grandiose propaganda does little to heal wounds. Besides, the people are welcoming and friendly to Americans (76% favorable to Americans) and the movie is such poor quality I can’t imagine it is received with anything more than derision or laughter. At least I hope so. 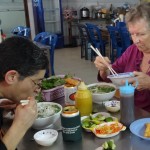 We head back to Sài Gòn for a wonderful lunch of Pho, a Vietnamese staple of chicken and noodles. Then it is a short ride and wait for our flight out of Sài Gòn. We land in Đà Nẵng, a noticeably cleaner, more maneuverable city. I like its modern look. However, we continue on by bus, past many political propaganda signs, to the UNESCO city of Hôi An.