Meeting the Buddhas of Luang Prabang

I arrive at the modern, clean Luang Prabang International Airport (driving would take hours). Our flight is late so we rush to lunch along the Nam Khan River. No fear anyone starves as the food continues to be superb. I pass some of my plethora of riches to the pregnant cat at my feet. This UNESCO World Heritage city of 70,000 is a perfect place. Located at the confluence of the Mekong and Nam Khan Rivers, Luang Prabang is surrounded by mountains, rivers, low-keyed saleswomen, and beautiful nature. My afternoon is spent amid this natural beauty. 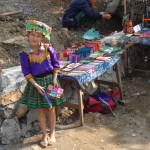 We ride Lao’s “fucking terrible” roads into the countryside to a Hmong tribal village. The Hmong practice an Animist religion, placing great respect in the spirits of animals and nature. The village is poor, dirty and depressing, for me, not them. Every step passes a kiosk of goods, mostly Chinese knock-offs, hawked by little girls dressed in traditional garb. Tourism has radically changed their lives, converting them from a mountain tribal life to mini K-Marts. To say the Hmong were dirt poor is an understatement. Children, rather than “you buy, one dollar,” should be in school. We entered one dark home storing the motorbike, sacks of food, smokey cooking pit, and a walled-off sleeping spot for the owner. More the feel of a garage than a home but ‘mama’ was sweet, smiling and proud to share her everyday life with camera-toting tourists poking their noses into her little bits.

A second village, that of the K’hmu, rested along a fast-moving, aquamarine river. Residents are wood carvers and the village looked prosperous. No one attempted to sell us anything.

We continue on rough, narrow roads and over creaky bridges. Our driver perhaps could use lessons from the ‘Hà Nội School of Driving’. Vehicles and pedestrians, scooters and trucks seemed to be an annoyance to be passed, at what appeared high speed and on hills and curves.

We arrive safe if somewhat frayed at Kuangsi Waterfall Park, stopping first to observe the rescued Lao wild bears. The park is a series of robust waterfalls, fast flowing streams and cool aquamarine pools. The color comes from the silt in the water. The robustness comes from the series of waterfalls tumbling a few feet to plunging several feet down the mountainside. Some hardy young souls jump into the cold water and pose bikini-clad above the sparkling pools.

Luang Prabang is a center for Theravada Buddhism with about 80 monasteries and approximately 1200 monks. Saffron robes are everywhere. The before-dawn alms rounds, Tak Bat, is a haunting spiritual experience as roosters crow and wooden drums beat to announce the arrival of the monks. Straight lines of monks pass through the streets to receive sticky rice and food for their two meals of the day; they may not eat after noon. Elder ladies sit in the middle of the street and give each monk, from elders to very young boys, a dollop of sticky rice. The monks quickly file past and, as a female, I must bow lower than the monk, and some are quite small, and place my offering into their basket. The monk will remove the top of his basket, replacing it until the next person extends their offering.

We learn the meaning of their saffron and yellow robes. Because our guide, like many boys in Lao, spent his early years as a monk (a common way for boys to get an education), he informs us of the monk’s life and traditions. Women are never allowed to touch the monks and all touching is avoided if possible. Originally robes were corpses’ shrouds. Thus all material is dyed using the colors of black, red and yellow. The black represents dirt, red represents blood, and yellow represent pus – symbols of the sacrifice of the dead who gave their shrouds to others.

I spend time walking the streets and alleys of this small, quiet, former capital. French architecture dots the city and is an historical reminder of its colonial past.

The National Museum was the Royal Palace before the last king was deposed. In 1975, the new communist government (Pathet Lao), led by another royal, Souphanouvong, overthrew the Royal Government and arrested many members of the Royal family. It is reported the King, Queen, Crown Prince and the King’s brothers were taken to a remote location to a “re-education camp” where it is believed they died. No official confirmation either way. In 1980, a grandson of the former King became Head of the Royal Household. According to our guide, who points out the photos of the King and Queen but does not mention the method of their removal, the present royals live as commoners and receive little attention from their former subjects.

However, it was this former King who last decorated the palace and throne room. Every inch of its gorgeous red walls are decorated in glass mosaics depicting traditional Lao themes. Most of the palace is simple but these walls are artistically unique and beautiful.

Even though Lao joined Vietnam in the American war, the formation of its coalition government was relatively peaceful, as was the transition to the Lao PDR. All except for the Royal Family, of course. There have been relaxed rules of commerce since 1989 and Lao continues to move towards a market economy. Like many struggling economies, by the late 1990’s Lao began to develop tourism to bring in dollars.

Walking down what appears to be a back alley and dirt road, we come to the Museum of Ethnology. Here we have the opportunity to learn about the customs and daily lives of the people who live in this region.

We visit a number of historic temples including Wat Xieng Thong, Wat Visoun. That Makmo and Wat Sen. Innumerable legends are imparted upon us about these Wats – it is agreed we are beginning to be “wated out.” There are standing Buddhas, sitting Buddhas, leaning Buddhas, and headless Buddhas. Tiny Buddhas, huge Buddhas, fat Buddhas. Smiling Buddhas, coy Buddhas, manly Buddhas, and Buddhas with shapely-waist and narrow hips. I struggle to remember something unique about each temple site.

Wat Visoun was built in 1513 by King Wisunarat/Visoun. The temple’s most unique feature is its unusually shaped stupa designed by the wife of King Wisunarat to be a lotus flower but referred to by locals as ‘the watermelon stupa.’ 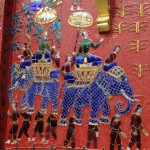 I especially like Wat Xieng Thong which was the location for the coronation of Lao kings. The original temple was built in 1560 under the direction of King Setthathirath (several kings of the same name and I fail to remember which number) and remodeling took place during the 1960s. The temple remains in its original form with repairs to the roof and gold leaf gilding, and gold lacquering was added to the walls and entrance. The outside walls have some of the same sparkling glass mosaic decorations as the royal thrown room. The rear of the temple features an intricate glass mosaic called “tree of life.”

Relics include a rare reclining black Buddha dating back to the reign of another King Setthathirat and displayed in the Red Chapel. The Buddha image was showcased in Paris in 1931 before being returned to the temple in 1964 and it is considered to be extremely unique.

Not to be missed is the building housing the funeral carriage which carried royal ashes through the streets of Luang Prabang. However, it is what lines the walls of the building that most attracts me. I visit alone, and standing along its dark walls are scores of dusty, abandoned Buddhas. The silence, the Buddha eyes and serene smiles follow me as I walk past.

An interesting tidbit here: Every Lao Buddhist male is expected to become a monk for a short period of his life. But there is also Animism among some hill tribes, like the Hmong. There also exists a “cargo cult” who believe Jesus will arrive in a jeep dressed in combat fatigues. Hopefully the roads will have improved by then.

Traditional Lao culture is heavily influenced by the cultures of Khmer, Vietnamese, and especially Thai which was once part of the Lao kingdom. These countries continue to share many similarities in sculpture, music, dance and cuisine. The focus of most traditional Lao art is primarily religious and includes wats, stupas, and distinctive Lao representations of Buddha.

The colorful and lively daily produce market has something for everyone’s table. I see vegetables of all varieties, some unknown; large and healthy carrots, lettuce and sweet potatoes; chickens, squirrels and rats; rice, herbs and spices. It is always fun to attempt identification of the ‘mystery’ meat or vegetable. It is a plethora of delicious delights, but all in the eyes of the beholder. I personally draw the line at the giant cockroaches, live and scurrying to be free.

The Night Market, in contrast, sells the same twelve things for a mile, but makes for a nice evening stroll after dinner. The sales are a soft pitch and one can browse without hassle. On sale are souvenirs, scarves, elephant pants, junk, or the snake-in-a-bottle alcohol.

This small, relatively charming and quiet city is destined to change radically in the next decade. China, a huge investor, is building a direct rail line to Luang Prabang. This will be a major game changer. I wonder if they will know what hit them, or what such a concession will truly cost them in terms of “charming” and “quiet.”

As a result of Buddhist teachings, our guide considers life and living with positive, thoughtful consideration. When explaining a point, be it about religion or politics, he explains all points of view. Everything has more than one explanation. He does nor fear the Chinese but welcomes their aid to villages and sees expanding commerce as a benefit to both countries. He believes, as does almost everyone I have talked to in the world, that the American people are good but their government is of one ilk and not good. I am always sad to hear this but the more I travel and read, I find it harder to argue the point.