Boarding the Sea Spirit for the North Sea

Such a deal ! When I read David Rowell’s “Travel Insider” email about the inaugural cruise of Polar Expedition’s Sea Spirit, I was immediately interested. Fourteen days, departing IJmuiden, sailing to Edinburgh, north to ports in the Orkneys, North Shetlands, and Faroe Islands before circumnavigating Iceland. Even better, boarding the ship in Hamburg as an invited guest of Poseidon Adventures for three days of inaugural festivities. How much better could it get?

Actually, it could and did, with unexpected bumps along the route.
Many things attracted me to book this cruise. I am not a cruise type so destination and ports are important: Iceland and the remote islands of the Faroes and Orkneys qualify as cruise material. Size matters: the 297′ Sea Spirit (the refitted Italian Renaissance V) is a 114-passenger, 1D ice class ship newly refitted for the Artic regions and with a draft of 14′ she can dock at smaller ports. Adventure: plenty of opportunities for hiking and zodiac landings in remote bays. Value: the price of this inaugural cruise was too good to pass up.

Visiting Didi and Bea in Hamburg

Before boarding the ship in Hamburg, I was able to visit with two of my ‘daughters’ (past exchange students). Didi lives in Bergedorf, a short S-Bahn ride from Hamburg. Bea, my Swiss daughter, last seen in January in Myanmar, came in from Berlin to spend the weekend. It was delightful to share time with the girls and Didi’s family, visit a couple museums, take a pleasant forest walk and a peaceful Alster Canal cruise. 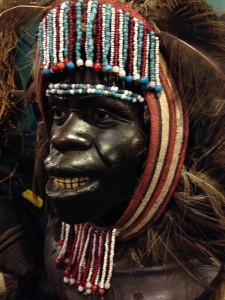 Art and collectibles at Harry’s Hafenbasar in Hamburg

For those visiting Hamburg and looking for the unusual, ride the U-3 to the port, exiting at Baumwall and walk the short distance to Sandtorkai where Harry’s Hamburger Hafenbasar Museum floats. (Remember, in Hamburg, “hamburger” has nothing to do with our American sandwich.) The museum is below decks of a retired floating crane boat. Crammed within a maze of small rooms is the unique private collection of Harry Rosenberg, a former bar owner and local character, who served refreshments and stories to seamen from around the world. His request? “Bring me something from your travels.” The result? An incredible collection of oddities and priceless artifacts from shrunken heads to intricately designed tribal face masks, from golden Buddahs to stone phallic gods of unknown origins. Much of the collection originates from the continents of Africa and Asia. Curators dedicated to keeping the spirit of the collection alive find it impossible to determine the origins and worth of all pieces as Harry recorded little about his acquired treasures. However, it is a fascinating stroll among the artifacts stacked floor to ceiling and filling every nook and cranny of this ship. Many are for sale.

Boarding the Sea Spirit, our adventure begins with a harbor cruise and fireworks. Even though Polar Expeditions has sailed both polar regions for two decades (ice breaker “50 Years of Victory” and the twin sister-ship Sea Explorer), this is the first sailing of the Sea Spirit. She will sail routes of the North Sea which will include Iceland, Spitsbergen, Franz Josef Land, Greenland and environs. Sea Spirit provides the ability to visit remote areas, kayak, zodiac to landings, and observe wildlife in its native habitats on a small, comfortable ship. Many VIPs are aboard, including a few of us “special” passengers, toasting the ship’s success and excited to begin our voyage. 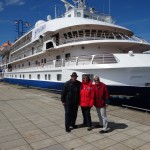 Departing Hamburg Harbor, we sail up the Elbe, slipping past the Kiel Canal to enter the North Sea. Swells increase almost immediately and we are in for a bumpy ride as we sail in an easterly direction toward IJmuiden, the huge industrial port of Amsterdam.

Because we are later than anticipated (I guess our Russian Captain has never sailed this route or asked how long it might take) and the port is not easily connected via transportation to downtown Amsterdam (it’s cheaper here than a downtown pier) most passengers elect to stay aboard or explore this small, quiet village. (No ship transport provided and public buses will require an hour and at least two changes; taxis are 60€)

IJmuiden is quiet, probably better described as ‘deserted’. A walk of the area reveals few shops, no restaurants open, and little human activity. The most interesting sites are the working locks on the canal into Amsterdam, the lovingly cared-for Coupe de Ville parked in the street, and the cemetery. The weather is nice so it is a pleasant walk around the neighborhood. 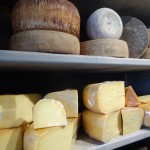 Perfection is this cheese store in Haarlem.

A morning shuttle takes us to the charming village of Haarlem. Here, I can wander architecturally interesting streets, window shop, visit the beautiful St. Bavo’s Cathedral, discover the red light district, and enjoy a beer in one of the many cafes on the main square. I also am able to use the city’s free public Wifi system, a much appreciated tip of the hat to their visiting tourist. A most pleasant day can be spent in Haarlem. From here, if time, a train would zip you into Amsterdam in just a few minutes.

For the Sea Spirit, this is the official start of our cruise. All the VIPs are gone, the VP of the company remains, and the ship gets down to business. We board early afternoon and set course across the North Sea for Edinburgh.

Our day at sea is leisurely with calm seas and comfortable temperatures under partially sunny skies. It is typical shipboard life with three sumptuous meals, coffee or hot chocolate in the lounge, the meeting of fellow passengers, and presentations on future ports and one on birds. We expect to see lots of birds, enough to hasten the hearts of all ornithologist aboard.

However, I am beginning to discover some failings of the ship. There is a need for information concerning maps of our route and sea conditions. In fact, just about any accurate information would be appreciated. I am hungry for knowledge in ‘a state-owned, one-newspaper town.’

We dock early at Edinburgh’s Leith port to a partly cloudy day and strong, brisk winds. (FYI: Port Authority offers access to free Wifi throughout the day.) Coming into port, seas are flat and calm. We have little free time here so I elect to take the city tour which will end at Edinburgh Castle. (Purchasing the tour package before sailing was good as it included major tours on Iceland, but also one of Edinburgh. Otherwise this $110 ship tour is a terrible waste of money. Even included in the package, it was a deadly waste of time.) 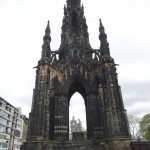 In spite of what the guide said, Robbie Burns and Edinburgh needs a power wash.

The tour drove from port through crowded and construction-disrupted streets, past sights barely noted and soot-ravaged monuments hardly seen, around the beautiful yellow Gorse-covered hills of Holyrood Park to Edinburgh Castle. Here we immediately grabbed our tickets and broke from the inept tour guide to explore its wonderful historical and military museums.

It is a pleasant walk from the castle down the hill to Princes Street and its plethora of shops, monuments and gardens. The architecture is a mix of Victorian and modern – equally covered with a layer of black soot. Did I hear our guide right when she said the city chose not to blast the soot away because it was decided “it protected the stone from weather and further erosion”? The memorials to Robert Burns, Livingstone, Nelson and others would benefit from a cleaning. I have but a few minutes to walk Princes and George streets to Charlotte Park to catch the ship’s shuttle which never comes. Fortunately, a ship’s rep is present to call a taxi to return to the ship that doesn’t leave on time. Did I hear our Russian Captain right? The port’s “pilots are very busy” and we will sail two hours late, which becomes four hours. Too bad, as it would have been nice to see more of Edinburgh.

(I later learn the ship waited on three medical emergencies: injured back of staff, injured finger of crew, and a sprained ankle of passenger. This consideration for others would have gained countless favorable points, far more than telling experienced travelers the pilot was busy. Why lie?) 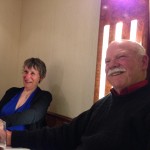 Tonight we celebrate my friend’s 50th wedding anniversary (the ship forgets to check its own notes so we are treated to a second night of quiet celebration later.)

And thus begins the official start of my Polar Expedition cruise. My destinations become more remote and ‘exotic’ and adventurous. My ship is the Sea Spirt. My overall opinion of its organization and service is on hold.