Huge fortresses and walled towns sit atop promontories over the sparkling azure Mediterranean as we motor between Valencia and Barcelona. I avoid the very expensive Autopista for the A-7 and the drive is pleasant and speedy. Even when I miss a roundabout turn, Google Maps reroutes; coupled with Gabrielle, driving is made easy. The circuitous route takes us onto a cornice road above the sea for fantastic views as we reach Barcelona.

We arrive on Easter weekend and much will be closed for holidays, Sunday less so than Easter Monday. We find The Ramblas and Gothic Quarter crowded as usual and lines for most sites are long. We choose or eliminate things to do. Fortunately, Barcelona is a wonderful, architecturally beautiful city to walk. And to work off those skillets of paella and the chocolate and churros, walking is what we do.

Up The Ramblas to La Boqueria Market for shopping and dinner. We shop for saffron, fruit, a place for dinner. We choose a typical bar where we sit on stools and enjoy a beer while a cook prepares fresh huge gambas, clams and mussels. It is a hectic but lively dinner scene. Strolling the streets of the Gothic Quarter, we roam through plazas, past numerous cafes and shops, stop to listen to street musicians. This is the daily life of Barcelona. Endless, narrow, old passageways winding through plazas and neighborhoods. 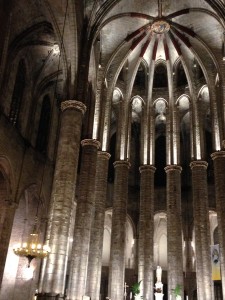 Squeezed in by the narrow streets of the Ribera district, we pause at the imposing Basilica Santa Maria del Mar. Built built 1329 and 1383 at the height of Catalonia’s maritime importance, it is an outstanding example of Catalan Gothic, massive and severe. However, inside slender columns, the 100 foot height of the barrel roof, and three aisles gives the impression of light and space. In fact, the spacing of the octagonal columns supposedly is the widest of any Gothic church in Europe—about forty-three feet apart, center to center. The church also has a serious claim to having the slenderest stone built columns in the world.

It is to Santa Maria del Mar that we return for 10 pm candlelight mass to usher in Easter Sunday. Done in Spanish with a smattering of English, Gabrielle and I enjoyed the atmosphere of this conclusion to our Semana Santa in España.

And tonight, we “spring forward an hour” getting one hour closer to the primary reason to visit Barcelona.

Antoni Gaudí is a major reason to walk Barcelona. Gaudí (1852-1926) was a Spanish Catalan architect famous for his distinctive, individualized style. He is probably best known for his yet unfinished Sagrada Família. But there are several other examples of his creations in Barcelona and all worth a visit. Near The Ramblas is Gaudí’s Palau Güell, a wonder of glass, stone and wrought iron. Strolling Passeig de Gracia takes us past the striking Casa Milà and Casa Batlló. 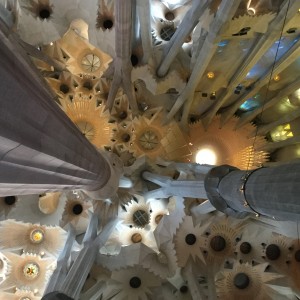 In Gaudí’s quest for a new architectural language, he created designs influenced by his passions for nature and religion. Considering every small detail, Gaudí used ceramics, stained glass, wrought iron, geometric shapes and flowing natural lines to inspire a new Modernist architecture. His designs are stunning, and for some I suppose, strange. But like all artists who dare to create new and bold directions and images, Gaudí was a master.

Gaudí’s work enjoys global popularity and continuing admiration and study by architects. His masterpiece, the still-incomplete Sagrada Família, is the most-visited monument in Spain. Seven of his works have been declared UNESCO World Heritage Sites. Gaudí’s Catholic faith intensified during his life and religious images appear in many of his works, most prominently around the Sagrada Família. This earned him the nickname “God’s Architect” and a movement calling for his beatification.

In 1972, I visited the Sagrada Família. At that time the church looked like a bombed-out shell: roofless, pointy spires, stone adornment about the entrance at the Nativity Facade. I could walk around the immense enclosure and see the sky and, looking at the model on display, marvel at this architect’s vision. Today, I return to see 44 years of progress.

The first stone of Sagrada Família was laid in 1882. Today, the majority of its 18 towers are complete, but the tallest, Tower of Jesus, has yet to reach the planned 566′. There are parts of the facade yet to complete, stained glass windows to install, adornment to sculpt. The completion of the exterior is still a decade away, 2026, the centenary of Gaudí’s death. Gabrielle has promised to return to witness the completion of this temple.

Buying tickets online and using my mobile tickets for a timed entry, we enter the massive doors of the Nativity Facade. My first observation is the elevation, light and color of the interior, the delicate lightness of the ceilings supported by slender columns. Walls of stained glass, skylights, soft tones yet rays of brilliant blues, greens, reds and golds highlight columns and ceiling. Here is a huge open space of light and color. All the stained glass in the apse follows a plan of graduated tones. And my eyes travel up, up the slender columns and windows to the ceiling, an elevation of 150 feet.

Gaudí’s goal was to elevate, to apply the beauty and shapes of the natural world to his design. Every inch, cornice, word and sculpture has a significance. Here is a mathematician’s dream in the use of helicoids, ellipsis, hyperboloids and parabaloids to create junctions, vaults, flowing lines and natural movement. Delicate columns rise 100′ before branching out like a tree in support of the roof. I am standing in a vertical world of space and color. The choir loft is empty, the organs silent, but I am sure the Angels are there.

It is not a disappointment that I will not be able to finish the temple. I will grow old, but others will come after me. What must be always preserved is the spirit of the work; its life will depend on the generations that transmit this spirit and bring it to life. – A. Gaudí

Walking the streets of Barcelona, I pass numerous notable architectural beauties. Enjoyment is found in looking up. Passeig de Gracia offers not only high-end shopping and cafes, but the aesthetically beautiful buildings of Casa Amatller and Casa Lleo Morera. The Hospital de la Santa Creu i Sant Pau is a UNESCO landmark and deservedly so. The fascinating, narrow streets of The Call district beckons one to just wander. There are numerous plazas filled with musicians and couples dancing to swing music or the traditional Catalan Sardana. Fountains gurgle, children play, and visitors gawk.

In the Placa La Seu is Barcelona Cathedral of Santa Eulelia. There have been churches on this site since the Visigoths in the 4th century. This Gothic cathedral was begun in 1298 during the time of James II the Just, King of Aragon. The simple west facade was completed in 1417, while the magnificent cloister was done in 1448, making the total duration of construction 150 years. (If completed on time, Sagrada Família will take 144 years.) 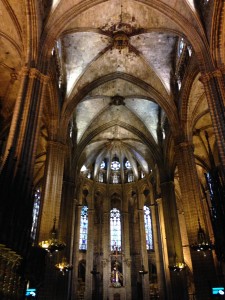 The interior is dramatic with a lofty roof, massive supporting columns, and ornate naves encircling the hall. Of note are the beautiful choir stalls which retain the coats-of-arms of the knights of the Order of the Golden Fleece. The cathedral also has a secluded Gothic garden cloister where 13 white, noisy but contented geese are kept, the number explained by the legend that Eulalia, the cathedral’s patron saint, was 13 when she was martyred. Using the elevator, we rode to the roof for views over the entire city.

From above, I can see the port and the wharf neighborhood of La Barceloneta, the Mirador de Colom where Columbus points to adventures at sea, the trees and open space of The Ramblas, the hill of Montjuïc with its fortress and art museum, the green gardens of Parc Güell, the roofs and spires of Barcelona. This is truly an international city and from here I cannot see the seedier parts, the strip clubs of El Ravel, the men in the streets selling cans of beer, the numerous homeless, street hawkers with their wears on blankets and plastic sheets brought with them from Africa. But on Barcelona’s streets, there is a culture and liveliness not found in Madrid nor other parts of Spain.

Look up and marvel at the architecture, look down for the cafes and street life. Barcelona is a walking city and one should prepare to do so or miss out on the best it has to offer.