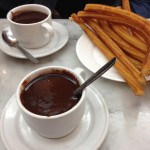 Decadent chocolate and
churros, oh my!

Sadly, there is no such thing as a convenient flight. I am pleased with flights that are on time, reasonably friendly and uneventful with no massive weather delays and no one deplaned by police. I have come to adjust my personal flight pattern by taking more time to get from Point A to Point B – much more time. What once was a painfully long flight has turned into a mini vacation where I am able to browse, lounge, shop, or eat. In need of message or pedicure? Check out the airport. I now visit airports like I once visited cities. All that is lacking is a bed and that can be had for a price. Regardless, if I choose to travel the world, I have no option other than to enter that world of airlines, that tube of recycled air, and subject myself to its pain. No pain no gain.

This trip, the pain gained me Madrid. When my niece, Gabrielle, asked to go to Spain this spring, I jumped at the chance. I return after 43 years. About time.

Madrid is a typical capitol city of wide boulevards, shopping, traffic and noise. But it is also spacious pedestrian areas, markets, tapa bars, chocolaterias, beer, the Prado, a royal palace, gardens and Metro. I suggest enjoying a few highlights for a couple days then flee thee to other destinations. Preferably somewhere where people go to bed before 4am.

Madrid’s Barajas Airport poses a long and winding path to immigration but a fast and easy exit. We followed the signage to the tram station, rode a fast tram to the main Terminal 4 and continued to follow signs past baggage to the Metro one floor down. There were no customs’ forms or personnel. Out of the airport as fast as we could walk.

Ticket machines were available and require Euro or a credit cart. Seeing as both my cards are chip and signature I did not try it. Be sure to check the machines. The larger machine dispenses the desired 10-Trip ticket and gives change. It also will ask how many people for the airport supplement. Cost for ticket and supplement for the both of us was 18.20€. The 10-ride Metro ticket is a bargain and allows both of us to use the same ticket. (Warning, the return 3€ supplemental ticket was individual and used to exit the Metro.)

Madrid Metro is fast, clean, quiet, and easy to use. Download the MetroMadrid app to use while there. If using buses, download UrbanStep for Madrid. In less than an hour we were downtown checking into our room while most people on our flight were lugging their bags out to a taxi.

What to do while in Madrid?

Certainly the Prado should not be missed. With its large collections of Goya, Velásquez, Tiziano, Rubens, Greco, Caravaggio and Tintoretto, this is a world class museum packed in two floors of masterpieces. To see, side-by-side, the same Adam and Eve scene painted by both Tiziano and Rubens, 75 years apart, presents an interesting perspective. For an artist it must be quite a learning experience to compare how two great masters treat the same subject. Did Rubens just do a knockoff of Tiziano?

Portraits of Spain’s King Phillip IV is as I remembered him, looking much like a haughty Herman Munster.

Admissions to Madrid’s attractions, as most of Europe, is a challenge. Yes, there are times that reduced price applies to me. Prado accepted my senior status, the Royal Palace did not (had to be an EU citizen). Both places accepted a student card for Gabrielle. Lines at the Prado were long even on a Friday in March so to save perhaps 20 minutes you could buy ahead if your schedule allows. Shorter lines at other popular spots. Security, including bag and body scanners, is everywhere and most times backpacks must be checked.

The Palacio Real, once inside, is impressive, even if it would give me nightmares to sleep and live in its over-the-top busily decorated rooms of birthday-cake decorations, paintings, tapestries, rugs and chandeliers. The Porcelain room, top to bottom, is beautiful in its way, probably easy to shine, but a bit cold and gaudy for most TV rooms. One must show wealth and importance, not taste. Even Hearst knew that. From the ubiquitous Grand Staircase thru the chambers of Charles III and chapel, the Yellow or Crown rooms or modern Banquet Hall, I’m sure the King and Queen live in more comfortable digs.

Across a broad square from the Palacio Real is the grey and white baroque exterior of the Almudena Cathedral. When the capital of Spain was transferred from Toledo to Madrid in 1561, the seat of the church remained in Toledo. Construction of Almudena began in 1879, stalled during the Spanish Civil War until after 1950 and completed in 1993, when it was consecrated by Pope John Paul II. Neo-Gothic interiors with soaring carved wood and geometrically painted ceilings are spectacular, even though it is not the most popular church in Madrid, criticized for its modern “pop-art” decor.

The plazas, pedestrian streets and markets are lovely to hang around. Musicians and mimes abound. The tapa bars and cafes are good for trying local food and drinks. Depending on your luck and smile, along with a beer or wine comes a plate of food from fantastic olives to small sandwiches and other finger food. There are hoards of places to try new foods. Just pick an interesting cafe in a sunny plaza, order a beer and kick back.

Not to miss is the Chocolateria San Ginés off Arenal. I ordered a cup of thick, warm rich chocolate and a plate of churros and luxuriated in its decadence after a long day.

Mercado de San Miguel is a plethora of booths of finger food, drinks, fruit and sandwiches. Browsing for dinner is a great way to dine. It’s kind of an eat-as-you-browse sort of market but with upscale foods.

There are numerous shops that resemble the best of delis or butcher shops with rafters of hanging ham hocks with a shiny black hoof and tiny Chinese umbrella hanging from their rumps. Rush in and grab a table. These restaurants, like our stop at PARAÍSO DEL JAMÓN, will serve you a tasty meal of jamón ibérico or Iberian ham. According to Spain’s rules on food products, jamón ibérico may be made only from black Iberian pigs, or cross-bred pigs as long as they are at least 50% ibérico. Specially bred, fed, pampered, slaughtered then cured, the resulting ham can have price tags of 80€ a kilo. Combined with cheese, bread with tomato and olive oil, it indeed can be a meal from Paradise.

El Rastro or “Thieves Market” is a perfect way to spend a Sunday. For over a mile the streets are lined with kiosks filled with every trash to treasure imaginable at fair prices. The architecturally beautiful Plaza Mayor is filled with stamp, coin and bottle cap collectors, alongside silver and iron mongers with treasures to sell. A day can easily be spent among shopping hoards that would put Macy’s basement sales to shame. Both Gabrielle and I came away with some treasures. 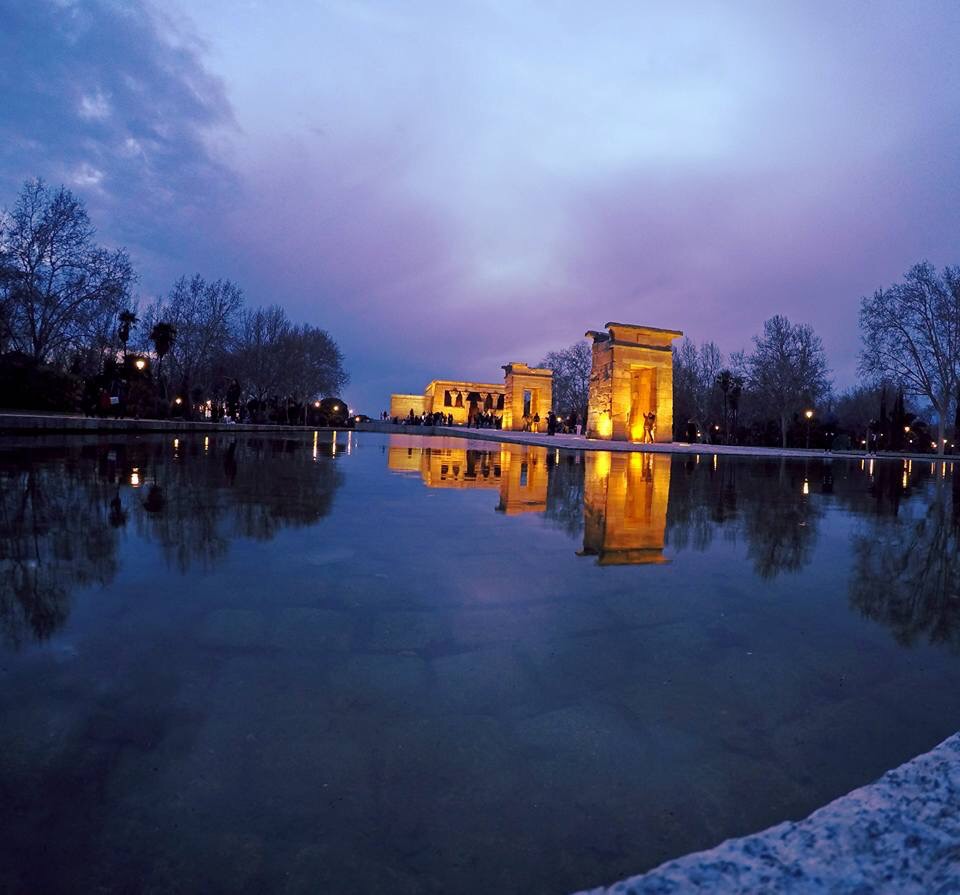 Temple of Debod – Photo by Gabrielle @ Thru the Lens Photography

The Temple of Debod is a 2nd century BC temple of the the Ptolemaic dynasty and later decorated by Roman emperors Augustus and Tiberius. It was originally built south of Aswan in southern Egypt very close to the Nile – too close. In 1960, due to the construction of the Aswan Dam and the threat by rising waters to monuments and archeological sites, UNESCO made an international call to save the historical sites. As a sign of gratitude for the help provided by Spain in saving the temples of Abu Simbel, the Egyptian state donated the temple of Debod to Spain in 1968. Dedicated to the goddess Isis, the temple was dismantled and rebuilt in the center of Madrid. Lit at night and surrounded by reflecting pools of water and numerous ducks, it is a pleasant spot to enjoy the evening air. So attested to by the scores of people loitering there in spite of cool weather and sprinkles of rain.

Our time in Madrid has been well spent. If we listen to our feet, we have seen a lot. There is much more to do and see but tomorrow, we leave the lively theater district here on the Gran Via, it’s constant traffic and sirens, to drive south to Granada, last stronghold of the Nasrid sultans before Isabel and Fernando ran them out of Spain. A couple of tough, no nonsense Catholic Kings who warrant a visit.