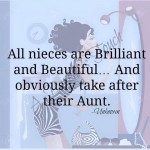 With teens you never know.

I know I enjoyed my travels to Italy with Gabrielle last spring. Italy is my favorite stomping ground and I loved exposing its richness to her. And, being an inveterate solo traveler, I wanted to get my chance to influence another generation of female traveler. But, what one never knows is did they enjoy it? After all, I travel but doing it with a teen was a whole new game, a whole new Super Bowl for that matter.

I felt I had arrived when she asked me last summer, “Do you think we could go back to Europe next year?” Actually I think she said Greece but I was so surprised that I jumped at the chance. I really didn’t care where we went as long as we went. I had found my young niece quite an agreeable travel companion. She was game for about anything, never complained, and was open to the experience of new food and new places. Gabrielle is a quick learner, observant, and fun. “You bet,” I replied.

She called it a “new direction.” I had expected a return to Italy, possibly driving south this time to explore the boot. Gabrielle is interested in Greece so I was thinking Athens, the Peloponnese,Thessaloniki. Instead she chose España. Olé!

I’m excited. I have not been around Spain since I was a brunette, since the Sagrada Familia was roofless, since Franco was in power and Julio Inglesias was just an aspiring Spanish singer and bull flight protestors were afraid to show their placards in public.

Once again, Gabrielle has chosen a fine itinerary and things to see. We are soon off on another adventure. Madrid, Granada, Málaga, The Rock, Valencia, Barcelona, Girona, Zaragoza, Segovia and El Escorial. Whew! We’re polishing up on very rusty Spanish, learning the important phrases like “cuánto cuesta” and “dos cervezas por favor”. She’s thinking about where to meet more palomas (pigeons) so as to compare them to the ones who crap on tourists in Venice’s Piazza San Marco. She knows who Gaudi is and eager to see his architecture. All music to my traveler’s ears.