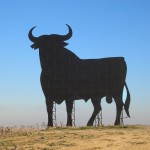 We drive west into the Les Guilleries mountain range with the bare rugged peaks of Massis del Montseny on our left, the snowy Pyrenees to our right, elusive Andorra in the distance. Temperatures have dropped several degrees and fierce winds buffet our car as we drop out of the mountain passes onto the flat plains of Aragón.

Once again, we are seeing the impressive silhouette of a 46′ black bull along the highway, usually atop a hill. He looks majestic, but his purpose is rather mundane. Called the Osborne Bulls, they were originally billboard advertisements for brandy. Around since the 50s, in 1994 the EU passed a law prohibiting roadside advertising of alcoholic beverages. Public opinion was on the side of the Bulls so they were painted black and remain an icon of Spain. They point our way to Zaragoza.

Zaragoza is the capital of northeastern Spain’s Aragón region, the land of Catherine who wasn’t so lucky in marriage as the 1st wife of Henry VIII, whose father and mother (Fernando and Isabel the Catholic Monarchs) united all of Spain and who dispatched Columbus and the Moors and thought the Inquisition was a “final solution.” Catherine, who despite being the aunt of the Holy Roman Emperor, Charles V, after 24 years of marriage and six pregnancies, was shoved aside by Henry who annulled their marriage and stepped up as head of the Church of England, thus defying the Pope.

Zaragoza also defies logic when it comes to cars and parking. I am warned ahead that GPS doesn’t work well in the city and it seems impossible to find a direct route to our hotel. It probably would have been easier, and cheaper depending on how well the traffic cameras were working, to park and walk to the hotel. Regardless, my car is here, squeezed into a little subterranean rat hole beneath the hotel. Lots of wall scrapes tell me extreme caution is needed to depart the rat hole. Glad I bought the insurance.

El Pilar Plaza can be our entire day’s destination. It’s history dates back before the Romans. A mosque stood here as early as the 9th century, with its entrance in the same place as that of the current La Seo. The arrival in Zaragoza in 1118 of Alfonso I (the Battler), did not lead to the immediate demolition of the mosque; Alfonso gave the Muslims one year to leave town, and in 1121, the building was consecrated under the name San Salvador. Around the plaza is the schizophrenic Basilica–Cathedral of Our Lady of the Pillar, ruins of a Roman forum, museums and fountains.

One can’t miss the Basilica–Cathedral of Our Lady of the Pillar for it fills one side of the huge plaza. Known as El Pilar, it is one of two minor basilicas in Zaragoza, and is co-cathedral with nearby La Seo Cathedral. The original Romanesque church was damaged by fire in 1434, and reconstruction began in the Mudéjar style combining Islamic and Gothic architecture, but only a few parts of it remain or were later restored. The present building was built between 1681 and 1872 and the architecture is predominately Baroque. What is most striking about the exterior is its immense size – 426 feet fronting the plaza, eleven cupolas and four towers. Many of the cupolas are covered with colorful azulejo tiles in a wonderful zig-zag design.

Supposedly, El Pilar is the first church in history ever to be dedicated to Virgin Mary and is a pilgrimage site for her shrine. The interior is ornate, with perhaps a little “over build” here and there. Not only is it long, but the width is 219’ and allows for massive square columns, impressive chapels and altars and memorials. The beautiful Holy Chapel houses the venerated image of the Virgin. There are also frescoes by Goya way up there in the main cupola, high vaulted ceilings and numerous minor domes. A small chapel to the Virgin also holds representations of the severed heads of Juan Bautista and Pablo the Apostol. You can’t miss the incredibly ornate Gothic alter and nearby is the place for the veneration and kissing of El Pilar which is easy to overlook as it is a little rock in the wall. Look for a line of people.
During the Spanish Civil War three bombs were dropped on the church but none exploded. Two of them are still on show in the Basilica.

What is the difference between the dueling basilica and cathedral designations? A basilica is simply an important church designated by the pope because they carry special spiritual, historical, and/or architectural significance. Once named a basilica the church can’t lose its status. A basilica may or may not also be the cathedral of the diocese. This is the highest permanent designation for a church building. A cathedral is the home church for the bishop or archbishop of a diocese and may or may not be a basilica. While a basilica may also be the cathedral in the diocese there is no requirement for it to be so. Clear?

Down the plaza is La Seo Cathedral San Salvador. La Seo and El Pilar both share co-cathedral status. Here existed a long-standing rivalry between El Pilar and La Seo in the 17th century. El Pilar even sued to win the episcopal seat, a suit that was decided by King Philip IV in favor of La Seo. The dispute was not resolved until 1676, when Pope Clement X made the decision to merge the two church chapters. Equal canons would reside in La Seo and in El Pilar, and the dean would live six months in each one. Politics! Does he pack his bags every six months or have two sets of vestments?

La Seo was originally built on the site of the ancient Roman forum of Caesar Augustus, whose giant statues are seen about the city. The interior is simpler than El Pilar. From 1204 up until the 15th century, all Aragón Kings were crowned here. The cathedral is a conglomerate of architectural styles from 12th century Romanesque, Baroque gates and tower, Moorish minaret left over from the main mosque that once stood here, 18th century neoclassic Italian-Baroque doors, and Gothic mixed with Mudéjar on parts of the exterior walls and interior alters. The roof is constructed of gilded wood, also in the Mudéjar style.

The diverse styles make it an interesting cathedral to circumvent. Its exterior wall of brick and glazed ceramics have the typical geometric drawings of the Mudéjar style.

But not all went well at La Seo for on 14 September 1485, the canon and head Inquisitor of Aragón, was assassinated in the cathedral as he was praying while wearing a helmet and chain mail. Clearly, the Inquisition was not received well in the city.

A museum on the second floor houses rich tapestries from the 15th, 16th and 17th centuries, one of the three largest such collections in the world. Also, La Seo Cathedral is part of the overall World Heritage UNESCO sites of the Mudéjar Architecture of Aragón. There is a charge for entry. 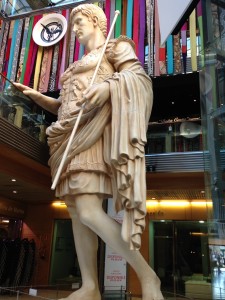 Under this part of the plaza is the Roman forum of Caesar Augustus. Zaragoza was founded in the year 24 BC by the Romans under Augustus so the city took the name of its founder: Caesaraugusta, from which the present name derives. What was Caesar Augustus doing in Zaragoza around the 1st century BC? Well, he was never actually here. Augustus founded the city to settle army veterans from one of his many wars. The city did not suffer during the last centuries of the Roman empire and was captured peacefully by the Goths in the fifth century AD, though there is nothing remaining of the Visigoths’ settlement.

Caesaraugusta was an important city with 30,000 inhabitants as well as baths, sewers, a 6,000 capacity theater, market, temples, a port and a road network that connected it to other cities in the empire, which was pretty big during the time of Augustus, ranging from Portugal to the Balkans and most everything in between.

Most of the ruins and buildings have been excavated since their discovery in 1989. The largest structures of the forum are housed in the River Port Museum and a combination ticket can be bought. Other sites include the Public Baths and the Theatre Museum. The Museum of the Forum is entered via the modern entrance in front of La Seo. Most is explained in Spanish but what has been excavated is interesting. Seniors and under 16 are free.

Museo Goya, just 150 ft south of the forum, is a beautiful modern museum of the artist Francisco de Goya (1746 – 1828) and friends. It houses three floors of paintings and an excellent exhibition of Goya prints. Goya is not well know for his prints, but he was prolific and one of the best printers of his time. Especially well done is the series he surreptitiously did on the Spanish War for Independence, and a series on bullfighting, a passion for Goya.

The Central Market is a stone’s throw from the west end of Plaza El Pilar and great photo opportunities exists for pig’s heads, big fish and octopus, meat cutters and vegetables. Not a dining market as in Madrid. The Augustus statue outside its doors along the ruins of the forum walls was givens be city by Mussolini in 1940 and is a bronze copy of the original Augustus statue which is in the Vatican.

A final stop for the day might be The Aljaferia, a Moorish castle about a 15 minute walk from El Pilar. This 11th-century Moorish palace was built in the Mudéjar-style, combining Islamic and Gothic architecture. It was the setting for Verdi’s Il trovatore. In 1038 the Moor ruler was replaced and an alliance with El Cid ensued. The Moors were finally forced out of Zaragoza, then allied with Christian Aragonese and from that time the Muslims of Zaragoza became military regulars within the Aragonese forces. These troops were always formidable adversaries within Spain.

At the opposite end of the streets leading from the Plaza El Pilar is Plaza España. Large, sunny, and lively, it is a great place to pause for a cerveza. Otherwise, wander the narrow streets of El Tubo or Casco Viejo (old town). Search for tapa bars. Though the streets tend to quiet earlier than what we experienced in Barcelona and Madrid, the scene is pleasant and active until 10 or so. You might have to hunt harder for that late night chocolate and churros. 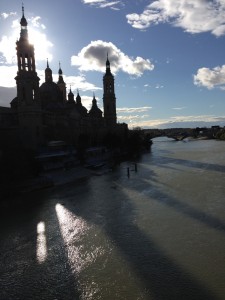 Silhouettes of El Pilar on the Ebro

I could really like this city but for three exceptions. First, it is quieter than I thought it would be. Second, the driving and parking in the city is an anomaly that cannot be explained even by locals who toss up their hands and say “it’s complicated because of the tram, you have to go back and start over.” And third, the cierzo – a strong, dry and usually cold wind that blows from the North or Northwest off the lee side of the Pyrenees. It reaches speeds of more than 60 mph several times each year. I think the last two days have been instances.

I challenged the fierce, cold cierzo at the riverfront along the Ebro, crossed the Puente de Piedra for some great shots of El Pilar, her towers in silhouette and casting long shadows upon the water as the sun set to the west. A pleasant sight, except for the wind howling across the bridge.

A wind that fills your mouth and tumbles waggons and armed men. – Cato the Elder, 2nd century BC

Cato thou knows for what thy art speaketh!