Skopje Macedonia – In Search of Alexander the Great

Alexander the Great, claimed by Macedonia, born in Greece

If judged by my entry into Skopje, bumper to bumper jams where there appears to exist no driving rules but one, “don’t hit anyone,” then I would describe Skopje as insane. Inching through bazaar and market with half an inch to spare, I would have thought Skopje was not for me. However, that was before I saw the pedestrian areas of the city center.

My first thought upon mention of Macedonia is “Alexander the Great slept here.” Alexander III of Macedon (356 BC – 323 BC), commonly known as Alexander the Great, was a King of the Ancient Greek kingdom of Macedon. Born in Pella in 356 BC, a region northwest of Thessaloniki Greece, Alexander succeeded his father, Philip II (who was assassinated) to the throne at the age of twenty. He spent most of his ruling years on an unequaled military campaign through Asia and northeast Africa, and by the age of thirty he had created one of the largest empires of the ancient world, stretching from Greece to northwestern India. He is widely considered one of history’s most successful military commanders.

Tutored by the Aristotle, Alexander’s goal was to reach the “ends of the world and the Great Outer Sea.” In 334 BC, he began a series of campaigns that lasted ten years, invading India in 326 BC. and stretching his empire from the Adriatic Sea to the Indus River. Eventually Alexander turned back at the demand of his homesick troops and died in Babylon.

As we drive through Macedonia, I think of Alexander and his conquering armies. Until we reach the environs of Skopje. I conclude these streets would have stymied his troops and possibly given Alexander his only defeat. 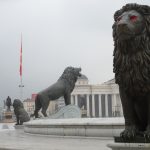 Skopje is a unique mixture of old and new, old being relative. Though it is one of the most ancient cities in the Balkans, almost all of it was leveled by a massive 6.9 earthquake in 1963. About 80 percent of the city was destroyed. What still stands include the ancient Roman walls, the Stone Bridge, and some mosques and a few buildings. The early Romans evidently knew how to build for disasters.

What I see in Skopje today is a modern, planned city that Alexander would have loved. The grandeur of buildings and monuments is deserving of any capital city. In fact, the locals say Skopje “has more horses than Ferrari.” There is no doubt that a monument resides on almost every corner. In fact, there are so many monuments and statues, protestors have splattered many with bright paint. They feel money can be better spent elsewhere. 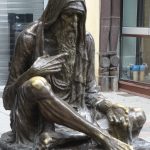 However, there is no denying that the city fathers are building a city center that will attract the tourist and shoppers. As we walk around downtown, restricted to pedestrians, stray dogs and a few gypsies, it is easy to be overwhelmed with the massive, columned architecture and the beautiful public buildings which tie together into what is the “Skopje 2014” project. Statues depicting the most important historical figures of Macedonia, including Alexander the Great and his father Philip of Macedon, crown either end of the Stone Bridge spanning the fast moving Vardar River (which rose over 5 feet in an August flash flood, killing 21 people). The city center includes hotels (Marriott just opened this week), theaters, opera and ballet, museums and cafes. The new Holocaust Museum is also located here. Just around the corner stands a Triumphal Arch and nearby is the Memorial House of Mother Theresa; she was born in Skopje.

One could spend most of one’s time just in this compact area of the city. But for the experience of the bazaars and older cobbled streets? The huge Old Bazaar is a short walk. The population of Skopje is largely Macedonian, a slavic speaking eastern orthodox majority, but also there is a 25% Albanian minority, who are largely muslim. It is in the Old Bazaar where these cultures mix and celebrate life, along with the sounds of Greek and Turkish music.

The Mustafa Pasha Mosque, an Ottoman era mosque, stands on a plateau above the old bazaar. Built in 1492 by Mustafa Pasha, the mosque is largely in its original state for no additions have been made through the years. The body of the daughter of Mustafa Pasha is buried beside the mosque in the rose garden. A five-year renovation of the mosque, funded by the Turkish government, was completed in 2011. 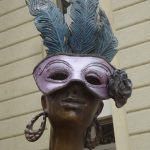 Outside the National Theater

Skopje is like an open history book of famous persons and historical figures. Over 2300 years of history is told between the statues of Philip and Alexander. And overlooking it all are the remaining walls of the Skopje Fortress. Undamaged by the earthquake, the fortress walls remain as a reminder of the importance of Skopje to the ancient history of Macedonia.

Skopje is also one of the most international cities I have ever visited. Everywhere are the sounds, smells, cultural tidbits of the Greek, Turk, Albanian, and what seems to be a mix of all, Macedonian. Side by side live cultures that share ancient histories: some good times some bad times. Their Catholic, Orthodox, and Mosque share the same neighborhood. For now, they get along, they work together and share in a common prosperity. They are friendly neighbors. But, this is the Balkans and all this could change overnight.

Sadly, we leave Skopje too soon, driving through the Macedonian countryside. Here, the land is rolling hills with numerous tall, narrow poplar trees. Marble is a big business and because this land was once under the sea, there is plenty of it. The roads are good and the toll roads even accept the Euro. The soil is rich and the biggest cash crops are oriental tobacco and grapes. Some 80 wineries are found in Macedonia and they are known for their Vranec grape variety (not to be confused with the Montenegrin Vranac). Vranac means a strong, black and powerful horse (black stallion), and wine made from this grape variety is associated with strength, potency, and success. Vranec also means black, which is why the wine is known also as black wine in Macedonia. It is excellent and inexpensive.

We stop in Bitola where we visit the ancient Macedonian city of Heraclea just 10 miles from the Greek border. In fact, climb a high hill here and you are likely to see at least two other countries. Heraclea was an Ancient Greek city in Macedon, ruled later by the Romans. It was founded by Philip II of Macedonia, Alexander’s father, in the middle of the 4th century BC, after he had conquered the surrounding region and incorporated it into his kingdom of Macedon. The city was named in honor of the mythological Greek hero Heracles. There are several well preserved walls, theater and mosaics. The city was gradually abandoned in the 6th century AD following an earthquake and Slavic invasions. 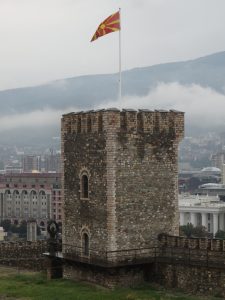 Tower and Roman walls above Skopje

The Republic of Macedonia is accused of appropriating symbols and figures that are historically considered part of Greek culture such as the Vergina Sun and Alexander the Great, and of promoting the concept of a United Macedonia, which involves territorial claims on Greece, Bulgaria, Albania, and Serbia. Until a solution is found, the provisional reference “the former Yugoslav Republic of Macedonia” (sometimes unofficially abbreviated as FYROM) is used by international organizations.

Republic of Macedonia between 1992 and 1995, bearing the Vergina Sun

However, it hit the fan again over the flag adopted by the Republic of Macedonia in 1992. The newly established state’s adoption of a symbol found throughout Ancient Greece was considered by Greece to be a provocation. Under a 1995 agreement, the Republic removed the Vergina Sun from its flag and certain clauses from its constitution, and both countries committed to continuing negotiations on the naming issue under UN auspices. However, throughout Macedonia, both the old Vergina Sun and the 1995 flag proudly flies.

Never a dull moment in the Balkans.