When I sailed past Albania in 1972, I was told the ship had to keep a clear birth of its coastline. “They will fire on us,” a Greek shipmate said. Cranky Albania was still isolated, Communist, and anti-social in 1972. I didn’t know Dictator Hoxha had built 750,000 bunkers to defend a country the size of Maryland – that’s a bunker every 40 acres, a bunker per family. All of that has changed, though the bunkers remain. With little fanfare, hardly a glance at my passport, and little more than five minutes and I am in Albania. And for the next 95 miles, I am introduced to what must be one of the most isolated, beautiful, and pristine areas in the world.

Albania is one of the most mountainous countries on Earth with mountainous terrain covering almost 75% of its territory; only 22% of land is arable. Two large European mountain ranges dominate Albania, the Dinaric Alps and the Pindus Mountains.

The Dinarides extend 401 miles along the Adriatic coast and stomps thru every Balkan country with its highest peak of 8839′ in Albania. It’s most western peaks actually are what makes up the island chain off the Croatian coastline. Over the centuries many armies fought within these mountains, their isolation and ruggedness providing refuge for those hardy enough to survive them. The history of centuries can be told as we drive thru passes, past villages and over rivers.

Mountain peaks, both forested and bare, tower overhead. And here are a plethora of peaks, many reaching heights of more than 8000 ft above sea level. The tallest is Korab at 9068 ft which is shared on the border with Macedonia, and the second tallest is 8,839 ft Maja Jezercë sharing the border with Montenegro.

The Dinarides are mostly limestone and therefore hard and slow to erode. Jagged escarpments were created through which steep-sided canyons and plunging gorges were carved by rushing rivers draining the higher slopes. The smoothing and carving of river rocks tell the story of a forceful sweep of water over the centuries. Mountain goats probably love the security and isolation of these heights.

And a river runs through it – the mighty Drin, Albania’s longest river of 208 miles. Actually, several rivers of various sizes and speeds rush out of the mountains to fill the countless lakes of Albania. Without much variation, the water is totally unpolluted and crystal clear.

Ultimately, I arrive at the pristine, relatively unpopulated Valbonë Valley. In comparison, I would describe it as California’s Yosemite on steroids.

The Valbonë River, crossed and recrossed as we weave our way through the Valbonë Valley, leads to the village bearing the name, surprise, Valbonë. The Valbonë is a tributary of the Drin, which eventually drains into the Adriatic sea to the west. The canyons of the Valbonë are narrow and steep, the river creates a path of rocks cut as with a knife or rubbed and polished to a glistening finish. The water is clean, bright and highly transparent.

As I am driven over the curvy, cliff-hanging roads, I enjoy the extreme landscape. Everywhere the scene is sharper, steeper, the aquamarine water clearer than any I have ever seen. The steep mountain cliffs, towering jagged mountain peaks with many well above the tree line, the forests green and thick create an unspoiled natural beauty. The fast moving streams are carving gorges untouched by modern man, so far. The landscape is unbelievably awesome and the aquamarine streams unforgettable.

The gorgeous Valbonë Valley was formed by glaciers and tectonic movement. Just past the small Valbonë village lies our hotel for the night, the Burimi Hotel, a colossus of stone and wood at the end of the valley road. The surroundings are spectacular. Countless springs flow down the slopes of Mount Jezercë and along the craggy riverside for over 35 miles, creating the aquamarine waters of the Valbonë River. Here around the village and hotel, the river bed is dry and covered bank to bank with large river rock for as far as my eyes can see.

The Parku Kombëtar (National Park), also called the “Albanian miracle of the Alps,” is a part of the Prokletije Mountain Range. It was designated a national park in 1996 and covers over 31 sq miles, including the Valbonë Valley and the Valbonë River and lies between craggy peaks bordering on national parks in Montenegro and Kosova, all strictly protected natural areas. In fact, Kosovo, Albania, and Montenegro plan to create another tri-country park in the area that will be called the Balkan Peace Park. Four villages are located within the current park (Dragobi, Valbonë, Cerem and Rragam) with 852 inhabitants. This is an isolated area and roads and infrastructure for tourists are in their infancy. 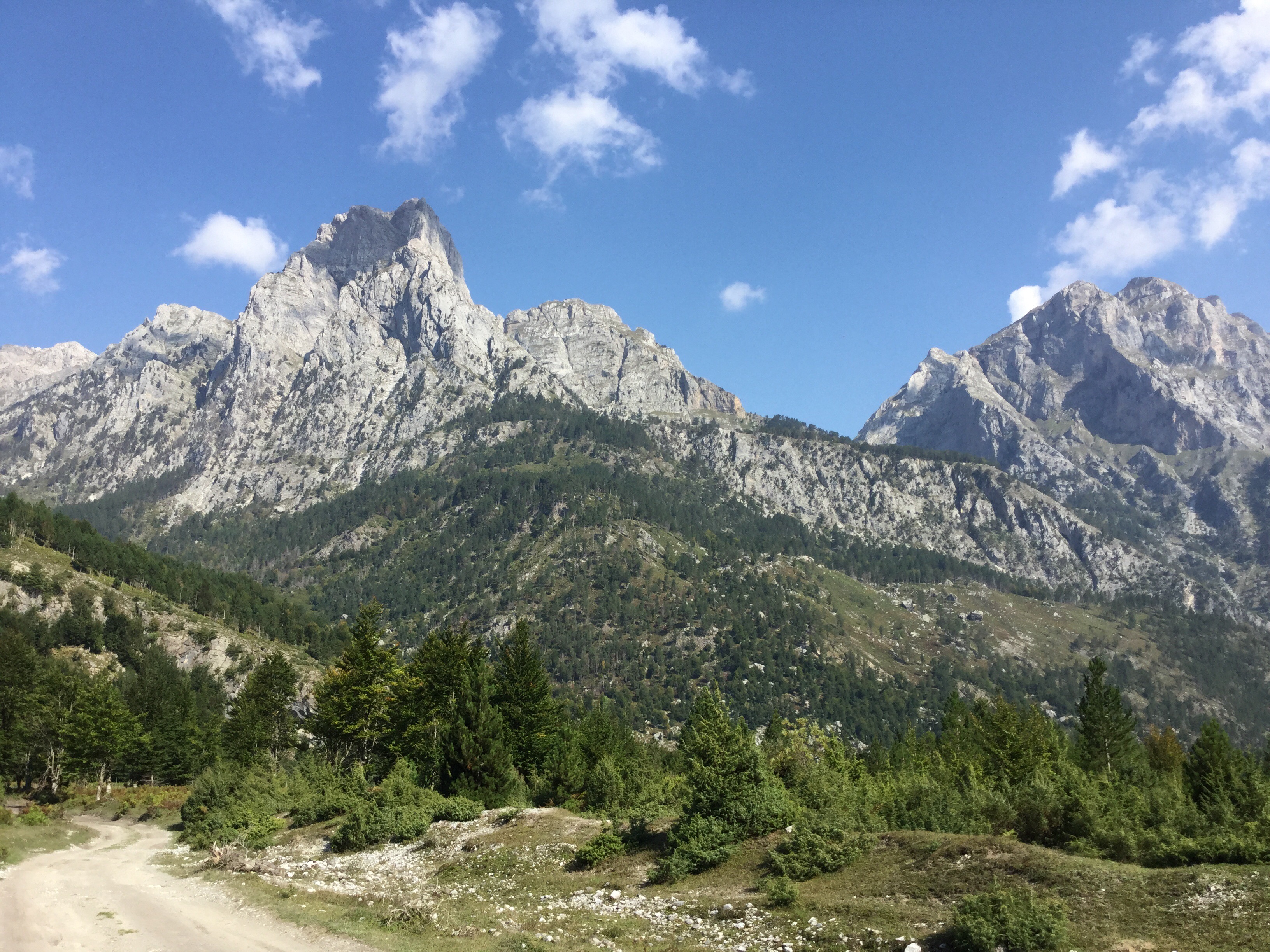 This morning, we hike this spectacular wilderness. To my back is Maja e Thatë a 7,894 ft mountain peak of the Prokletije range (Albanian Alps), over 4,921 ft above the village. The mountain’s southern and western lower slopes are relatively rich in beech and pine forests, while the higher slopes consist of very steep dolomite and limestone rock walls. Higher and higher peaks poke their crests and crags out from behind. The sky is clear blue and the visibility perfect. 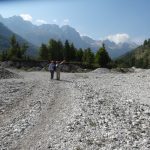 Our path winds over the rocky river bed, presently waterless. However, it’s width, round and polished bottom rock, and carved banks attest to the force of the water rushing through this valley in the spring. There is the occasional sound of a cow bell. Cows are allowed to freely forage during the day. It is a pleasant one-hour walk, somewhat uphill, amid pine and beech froests and flora and fauna. Then, around a bend, I see a field of corn, rustic fencing, beehive hay stacks and the large stone guesthouse of our hosts for the afternoon. We have arrived thirsty and hungry. 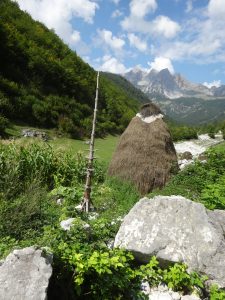 Lunch is in a covered pavilion among the families chickens. Their everyday view is marvelous, including 8,280′ Rosni Peak towards Montenegro and opposite the 7,894 ft Maja e Thatë. The mountain’s southern and western lower slopes are relatively rich in beech and pine forests, while the higher slopes consist of very steep jagged dolomite and limestone and shale rock. I dine totally surrounded by a compact group of peaks as far as I can see. And some of the highest Albanian peeks, barren light grey limestone soaring into the sky, still wear small patches of snow on their north facing sides.

All countries or regions experiencing a certain level of rusticity seem to distill their own liquor, or “rot gut” as I refer to it. Here it is called Rakija. Clear, high-grain alcohol of 40-50%, this fire water will warm the coldest of hearts in the frozen north in the dead of winter even if it is one of the worst winters on record. I “must” down the beautiful crystal shot glass of Rakija or offend my hosts. It is a hard decision but I do what I have to do. The mountain tea is much better.

Lunch consists of the ubiquitous vine ripened tomato and fresh cheese, delicious bean soup, chicken fresh from their flock and honey. All is cooked and served by mama and daughter while papa tells about the odd assortment of tools and artifacts hanging about. The family is living off their land and everything g is home grown. 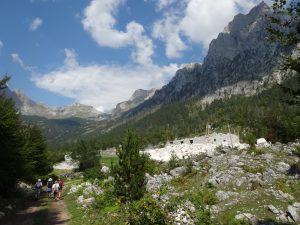 And always, the presence of the mountains. Surrounded by the activity of pecking chickens and the soaring peaks of the Albanian Alps on one side and the shared range with Montenegro on the other. Also, I can see the afternoon buildup of clouds over the mountains. Rumblings warn us to get back on the trail and down the mountain. So we say farewell and trudge off for our return via this gorgeous landscape, with the addition of a few drops of rain but, alas, no rainbow.

My room overlooks the barren grey peaks of the Albanian Alps, highlighted in the late evening by the rising of an almost full moon rising behind them. I can hear the stream below and the dogs barking at who knows what. If only the inn’s hosts were one tenth as friendly as mama and papa, this truly would be an idyllic setting.

Our second idyllic day is when we board the Fierza Ferry, vans too, for a leisurely 2-hour ride down the Drin to Lake Koman Ferry Landing.

Following the construction of the dam and flooding of the canyon, a ferry service was established to serve the local population. An old car ferry underwent a complete makeover and the Alpin Ferry began to make regular trips in spring of 2015. The ferry operates between Fierza’s hydroelectric station which is about an hour below our hotel, and Lake Koman Reservoir and hydroelectric power station. The trip is passing through one of the most isolated areas in Albania and the scenery is awesome. 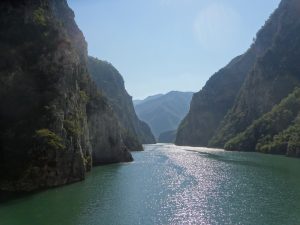 Ferrying down the Drin

We board our small ferry in Fierza amid rusted hulks and crude ramps, but the ferry itself looks sturdy and reliable. The Drin is wide and deep. Our slow progress takes us through breathtaking mountain gorges and spectacular fjord-like passages between steep cliffs. The river twists and turns, images of mountain peaks reflect off the blue-green water. The day is sunny with just enough breeze to extend the red, double eagle Albanian flag at the back of the boat. Everyone wants their photo with the flag. The sky is a cloudless blue and the waters are calm. It’s a perfect day putt-putting at a few miles an hour. Around each turn, past feeder streams and an occasional village, greeting smaller ferries as they sail by to dock at some remote landing, the scenery gets better and better. Then add the traditional music of Albania blasting from the bar’s radio.

It’s a wonderful way to leave this isolated area of Albania.