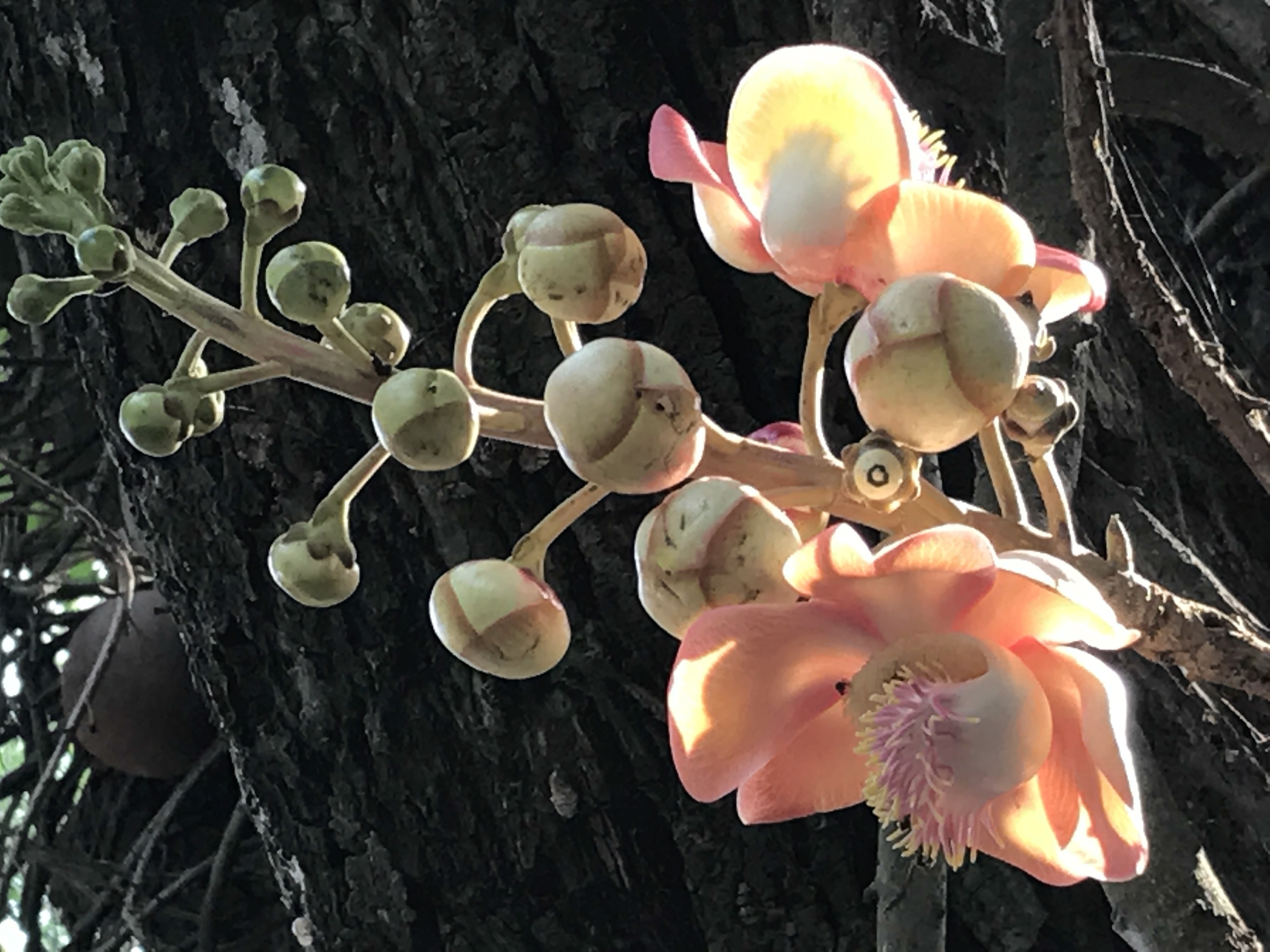 One can see just so many churches, monuments, or museums before all becomes a blur of facts, antiques, or statues. While I cherish all my experiences, I believe the ones I remember most vividly are the trips that included nature and wildlife. I don’t forget the penguins, alpacas, whales, elephants, lions and tigers and bears, oh my. The hiking of mountains, jungles and park trails are indelibly impressed upon my mind. My trip to East Africa will be no different. Not only do I look forward to seeing the natural flora and wildlife of the area, as a researcher of my family DNA, I am returning to Man’s ancient roots.

I begin by exploring the lively town of Entebbe. Its barely paved streets lined with very deep trenches are filled with motorcycles, useful small businesses from cycle repair to barbers to laundries and butchers; electronic, dress, and hardware stores. No item is too small or unimportant not to have a small shop. The red dirt and closely packed markets are occasionally relieved by a green space or cement building. Plywood, tin and canvas create a compact shopping area of thriving entrepreneurs. I see little loitering, no stray dogs, very little smoking, and a few soldiers with guns. The market sells large beers for under $2. In fact, the exchange here is about 3500 Shillings to the dollar. A 7000 Shilling 50ml beer is a great value.

Entebbe is located on the northern shores of Lake Victoria, one of the African Great Lakes. Named for Queen Victoria in 1858 during a British expedition by Richard Francis Burton to locate the source of the Nile River, LV is the world’s largest tropical lake and only second to Lake Superior as the world’s largest fresh water lake. The only exit for the thousands of small streams entering the lake is the Nile River, whose source lies just a few miles south of here in Kenya, who shares just 6% of its shoreline. Another 49% of its shores lie in Tanzania. 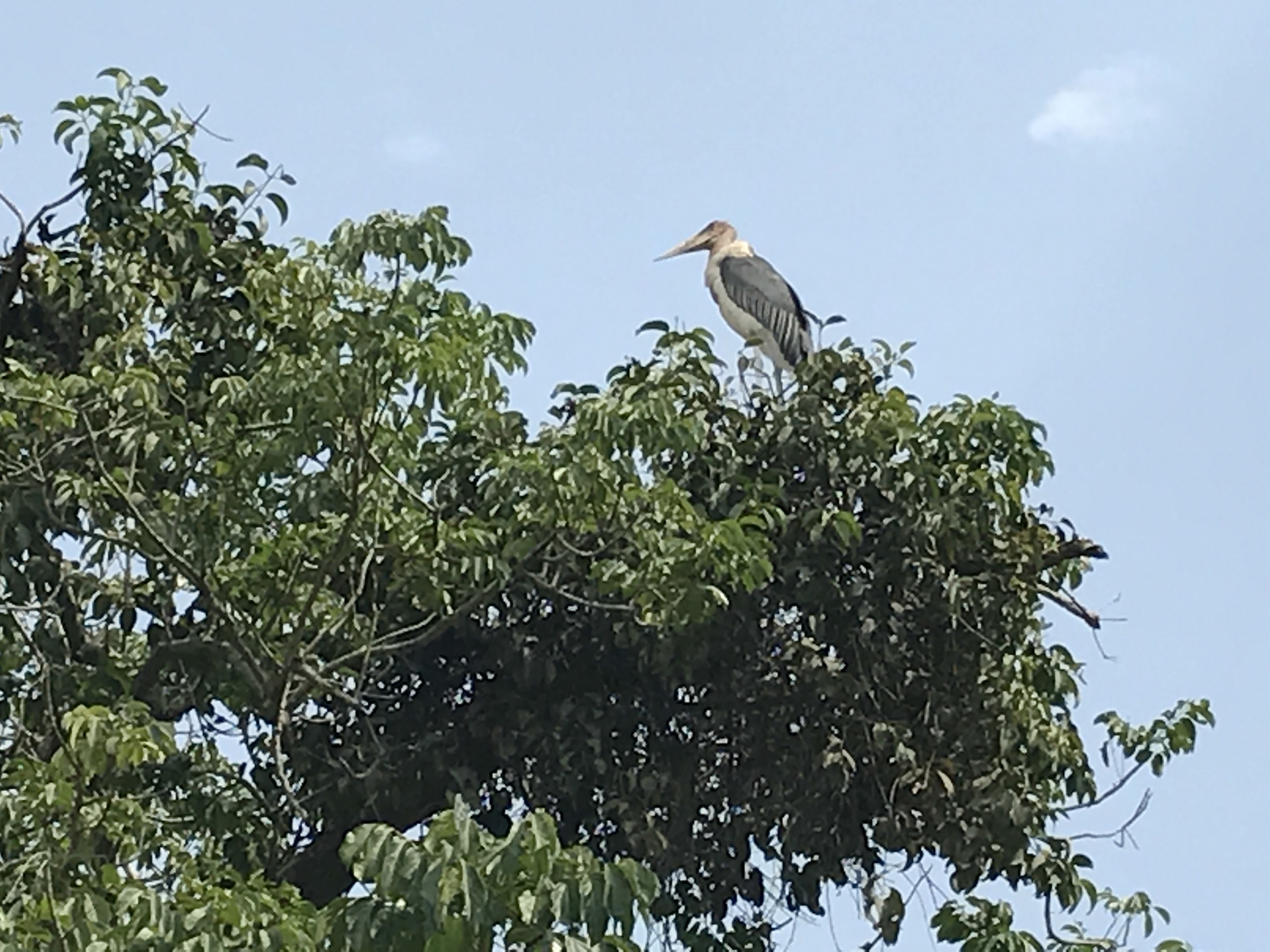 Our first stop this morning is the gardens, situated a few minutes drive from our Boma Hotel along the shore of Lake Victoria. Entebbe Botanical Gardens was established in 1901. Its tall canopy of trees is host to a multitude of birds, at least three species of monkey and the latest version of a Tarzan movie. The air is filled with constant birdsong and other vocalizations issuing from the treetops.

I also enjoy a beautiful forest of local tree species, the most interesting of which is the Cannonball tree with what looks to be hanging cannonballs and wonderfully fragrant flowers. The canopy is tall here, at least 75′ and, of course, the canopy is where the birds and monkeys prefer.

Entrance is .20 for residents, about $3 for foreigners, tho I saw no one collecting money and many climbing over the fences. Well worth two hours walking around spotting a plethora of red breasted, yellow throated, blue backed, green billed, red tailed birds.

A Speedboat zips us across Lake Victoria to our next destination. I’m told the lake, with an average depth of 130 ft, can get as deep as 275 ft. On its surface are several fishing boats of various sizes. Unfortunately, the lake is dangerously overfished for those who depend upon it for their livelihood. On the calm waters of the lake and around its shores are a variety of cormorant, herons, ducks, gulls and terns.

Geological cores taken from its bottom show Lake Victoria has dried up completely at least three times since its formation some 400,000 years ago. Today, probably its biggest threat besides overfishing is the damming of its waters. Egypt claims rights to its waters to the source of the Nile and looks unkindly upon those who build dams. Uganda does it anyway.

We are speeding across Lake Victoria to visit the Ngamba Island Chip Sanctuary. Ngamba Island is part of the Koome islands and is found just across the Equator some 15 miles south-east of Entebbe at an altitude of about 3700 ft. It consists of approximately 100 acres of which most is forested and separated from the human camp by an electric fence.

Until 1997, the northern part of the island was inhabited by a local fishing community. The community had cleared 2 acres of forest and this area is now used as camp quarters for staff and researchers, while the remaining area, located between the forest and the viewing platform, is where the chimpanzees are fed during the day. This, and lunch, is why we are here. 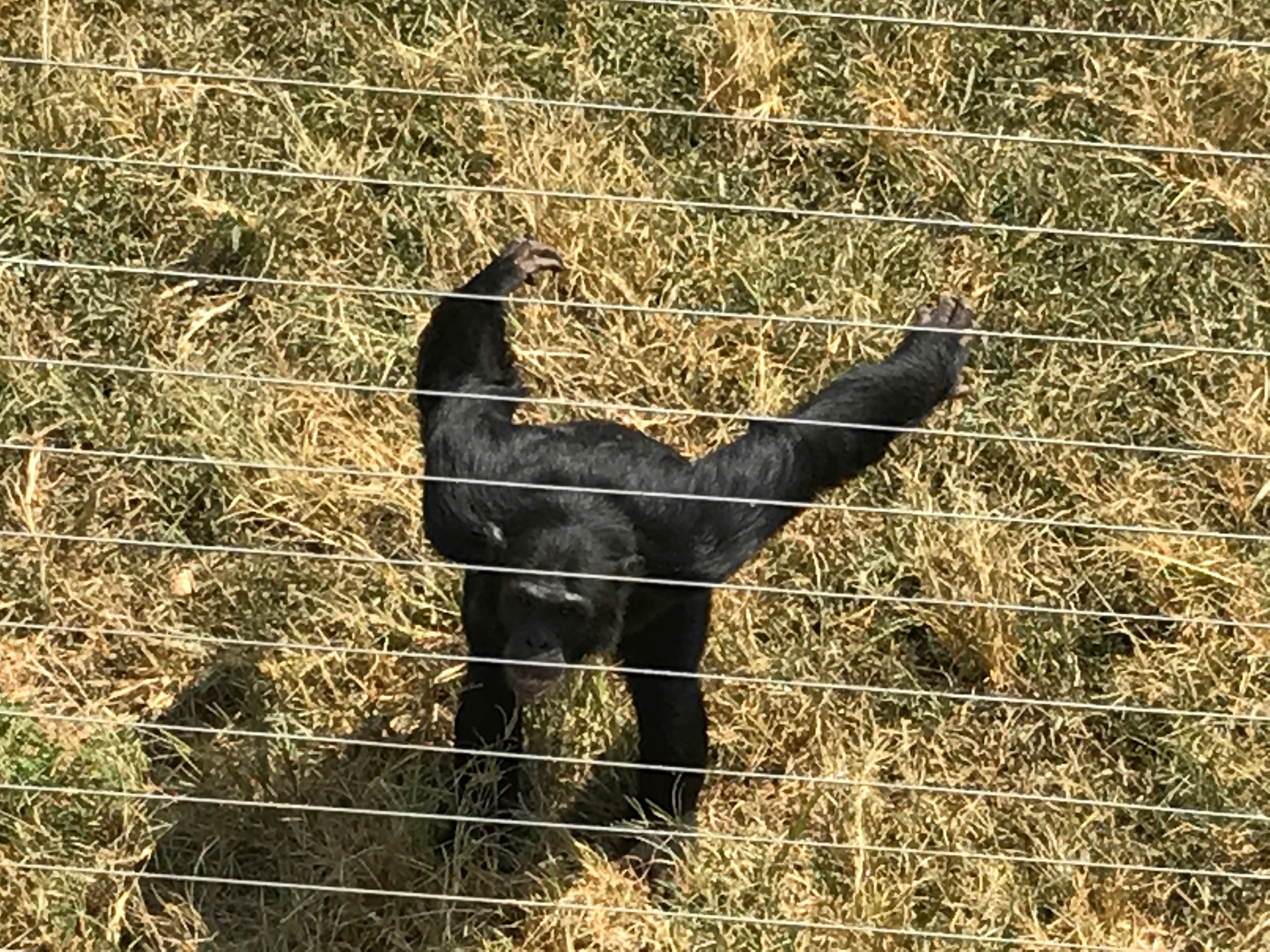 Ngamba Island provides an excellent forest habitat for the chimpanzees and other wildlife including fruit bats, spiders, fish eagles, and otters. Two 3-foot monitor lizards idly stroll down the beach. The trees along the shore are dotted with birds, mostly cormorants, and weaver birds have a multitude of nests in the trees about the camp. Every tree and bush is covered with the guano of those feathered friends who nest here. I wonder how anyone sleeps in the cacophony that must exist when they all come home at night.

The objective of the Ngamba Island Chimpanzee Sanctuary is to provide a safe home for orphaned and confiscated chimpanzees, educate visitors, and to benefit their local communities.

Presently, there are 49 confiscated chimpanzees, which includes two adorable babies, one just 8 months old and named Surprise as her mother’s birth control ‘failed’. Most of the other 47 chimpanzees who reside here are victims of illegal poaching for bush meat and pet trade.

I am surprised to learn that chimps are not widespread on the continent of Africa and just 5000 or so remain in Uganda. Because of encroachment, their habitat is shrinking and chimps will be on the brink of extinction if nothing is done in the next 5-10 years.

Chimpanzees are one of the two species of the genus Pan, the other being the bonobo. Together with gorillas, they are the only exclusively African species of great ape that are currently alive and native to sub-Saharan Africa. They also are Man’s closest genetic relative in the ape family.

Based on genome sequencing, the two extant Pan species diverged around one million years ago. The most obvious differences with bonobos are that chimpanzees are somewhat larger, more aggressive and male-dominated, while the bonobos are more gracile, peaceful, and female-dominated. Makes one wonder which line one is descended.

Both male and female chimpanzees have a hierarchy and this can be seen by their positioning at feeding times. The alpha males and females will have front positions while lesser ranks spread out on the field.

Their hair is typically black or brown though I see a couple grey-haired chimps here. I’m told chimps can prematurely grey. Males and females differ in size and appearance and though babies are totally adorable (and a cause of chimp endangerment), that cannot be said for the males who are not ‘cute’. Definitely not a cuddly pet. Because of the desirability of the babies, hunters have a market for them as pets. The tragedy is the hunter must kill all the protective adults in order the capture the baby so for each baby some 8-10 adults die.

Fruit is the largest part of a chimpanzee’s diet and we witness their eagerness to eat carrots, eggplant and other veggies during one of their four daily feeding times. How mothers must be proud that offspring offer no argument about eating their veggies.

Chimpanzees are our closest living relatives and most intelligent of primates. They use a variety of tools and construct sleeping nests each night from branches and foliage. At feeding time, it is a little sad to see them automatically come to the electrified fences to eat, but at the same time it is an opportunity to see social dynamics and behavior. Dominant chimps are in front and wave and raise their arms for the food toss. In fact, chimps communicate similar in manner to my nonverbal communication, using vocalizations, hand gestures, and facial expressions. 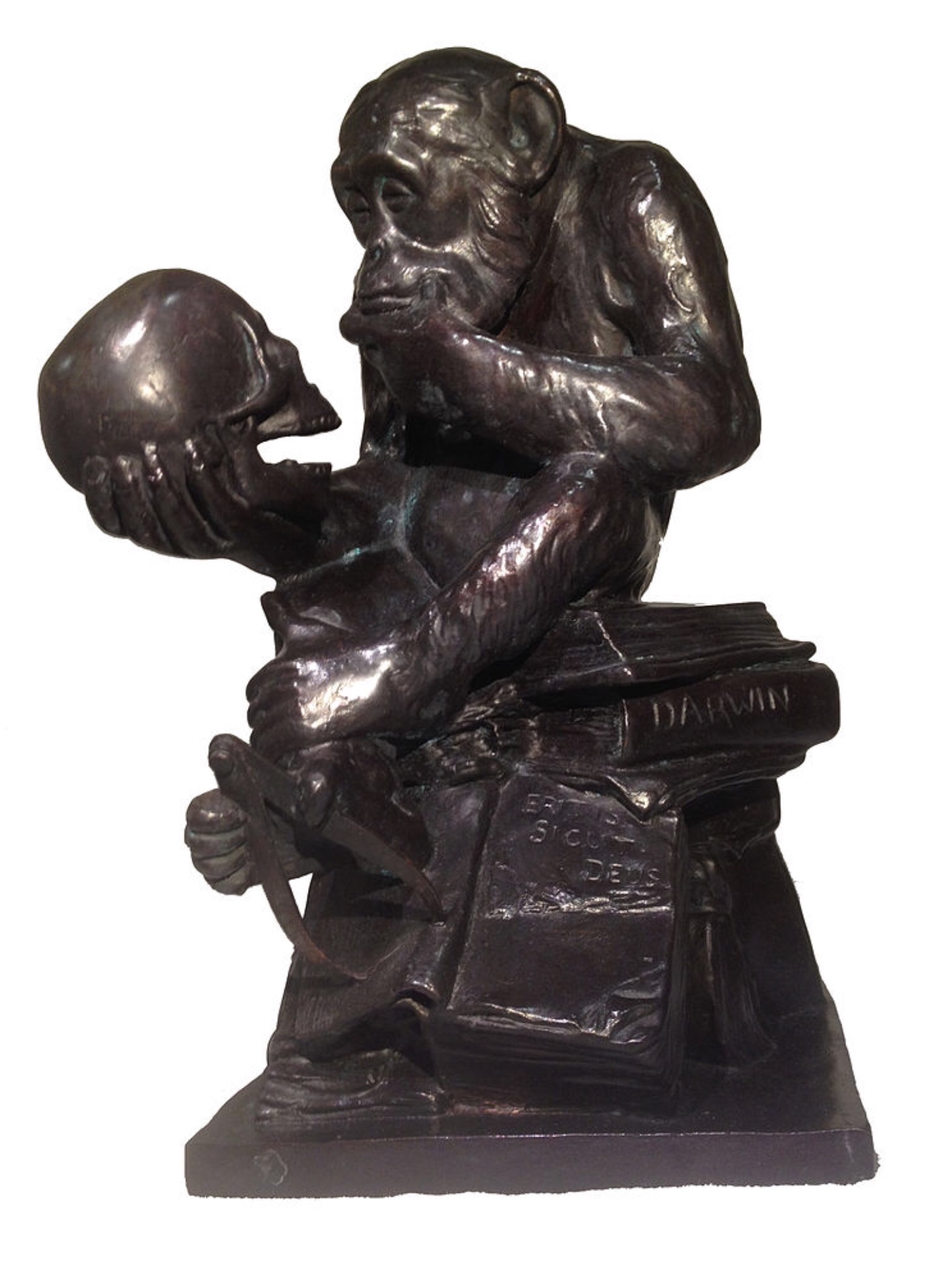 Some are quite good at catching, others collect their stash and eat at their leisure. One male slaps his arms Michael Phelps style readying himself for the toss. And for those pieces on the opposite side of the fence beyond reach? Clever chimps use a long branch to pull it safely to themselves. Not a veggie is missed and chimps do not leave until all pieces are retrieved. Once fed, chimpanzees return to the forest to play and relax until the next feeding.

In the evenings, chimps willingly come back to be fed and to walk down a chute to their overnight cages where they sleep. This is because if they stayed in the forest, their nest building would eventually destroy the canopy. Though an occasional one or two stay behind, most chimps sleep in their ceiling hammocks for the night.

Male chimps live about 33 while females live a few years longer. Here, the lifespan can be much longer, possibly up to 60 years, and there is little possibility for release.

Clearly, these chimps are very strong, especially in their arms. Watching them I do not envision a 4 ft, 200 pound pet. But an ancient relative who finally migrated out of East African?