Flying to Africa – A Marathon of Endurance 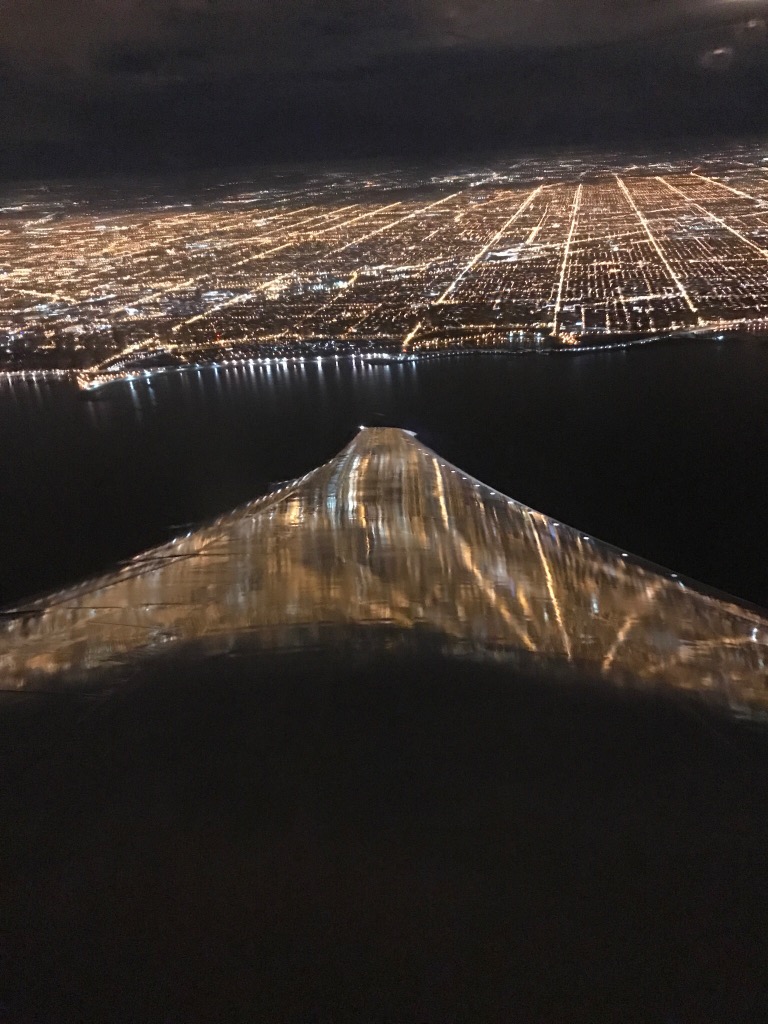 Tipping our wing to the lights of predawn Chicago

Travel has become a Marathon experience. Or maybe it’s just me. Distance, time, lack of convenience, age? Either/or, or all of the above?

Distance is a challenge in itself. I am flying from the West coast of one continent to the East Coast of another: United States to Africa, California to Uganda.

Time takes me across more time zones than I want to count. My iPhone assists. A Malaria prescription forces me to calculate when to swallow a pill in Chicago and inflight so I can swallow a third one 24 hours later at 9am in Entebbe. I witness two dawns, one over Newark and a second sunrise above Brussels. I depart California on Tuesday evening and arrive at my destination Thursday night. Physically and psychologically that’s a long time!

Sadly, the onetime convenience of scheduling direct flights and close connections are long in the past. Actually, I’m a pretty lucky flyer. In 45 years and probably 400,000+ miles, I have had to sleep in an airport on two occasions, one educational the other just annoying. On scale, that isn’t too inconvenient. The same cannot be said for my present journey considering I’m breaking my cardinal rule of never flying through Chicago in winter, face a daunting five plane connections, and will somehow lose two full days in the air.

Age? I’m not even going to consider that impact.

Rains that have avoided CA for 11 years pour down upon our dry soil these past two days, creating massive flooding in the north, snow measured in feet rather than inches in our mountains, and mini mud slides and falling trees at home. Winter storms are predicted for much of the country and I escape during a calm between two storms. Perhaps Mother Nature also mourns the loss of my president on the 20th and a dearth of honor and trust for four years.

On Tuesday the 10th, experiencing slight rain, I departed SLO late evening for LAX and a four hour layover. I use this to my advantage by visiting United’s new Polaris Lounge. Love the lounge life with free drinks and always some great soup and finger foods, Wifi, spacious bathroom and quiet.

Departure 9 minutes early from LAX gate, taxiing to the runway. This doesn’t mean the plane will actually depart but it is a good sign. Arriving “early” means they don’t use the extra minutes built into their schedule, a strategy airlines use to improve arrival statistics. I fly on a new 777 with convenient charging for IPad and a back-of-seat station for my electronic devices. Wifi and the United APP automatically updates gates and seat changes for planning my next connection .

Sleep does not happen. Great tail winds and a short 3+ hours to ORD. Chicago is a beautiful sea of light, edged by Lake Michigan, and reflected off our wing as we turn toward the airport for our early landing. I have a close connection in Chicago so I am a happy flyer.

My connecting gate is close so I have time to check-in for my Brussels Airlines flight and download the boarding pass. I also use dayuse.com to book a room near the EWR airport. My flight is just two hours but my layover is almost eight.

And this brings me to Day Two, sitting at Caps Beer Garden ordering a beer and crab cakes, waiting for my 71/2 hour flight to Brussels. Oh spare me, let me rest, may the food be decent and the beers give me reason to sleep. I considered upgrading but at $800+, think I can do something better with the funds.

But luck could run thin as my plane sits on the ground with technical difficulties, the hand loading of luggage, and two hours late late late. A bit of sleep-a lot of worry as we shake our tail feathers east for our six-hour flight to Brussels. We deplane, skirt immigration and security to go directly to our gate. And with five minutes to spare I am on my final 8-hour leg of this Marathon trip spanning three continents, three days and five flights.

Late Thursday, My tired, disheveled person lands in Uganda where Zika is endemic and CDC recommends a long list of immunizations and precautions from Malaria, Typhoid and Yellow Fever to Rabies. What? I have 25% DEET and SkinSoSoft. It’s 75 degrees and woodsmoke permeates the night air as a sea of smiles and black faces welcome me to Uganda. The thought of a shower and bed rest has consumed my mind for hours.

But Uganda’s rhinos, chimps and gorillas are sure to make all my efforts worthwhile.