An arduous climb out of Gondar has brought me to the massive Simien Mountains. According to Google Maps, which tells me what my stomach already knows, I have ascended up 7450’ just to descend down 3,668, up again and down again and around and around to reach my 10,735’ mountaintop lodge. The sunset which welcomes me has made the drive worth it.

I awake to the brisk chill of the Simiens. I am eager, but winded at this altitude, to explore this spectacular landscape; its mountainous passes and rugged beauty has earned Simien Mountains National Park the distinction of a UNESCO World Heritage Site.

Ethiopia is plateaus, peaks, and desert – an up and down traverse over mountains, down deep gorges and back up escarpments. The terrain is rugged and well suited to pack animals and walking. And the weather is just as challenging. Simiens are located in a semi-arid area that can see sudden snowfall at night. Hard to dress, hard to survive. We make a stop in Debark at park headquarters to pick up our “guards,” three militiamen carrying two AK-47s and one old rifle. What kind of animals lurk in these mountains?

We will spend the day hiking the Simien Mountains where peaks exceed 13,000 ft. Ras Dejen, ”the general who fights in front of the Emperor,” is 14,928 ft. “The General” is the highest mountain in Ethiopia and tenth highest mountain on the continent. Even though I won’t be climbing the peaks, hiking these highland plateaus takes me to almost 11,000 ft. and my gasping lungs respond accordingly. 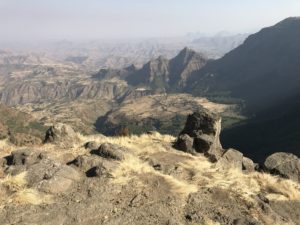 I feel like I am standing atop the North Rim of Arizona’s Grand Canyon. The landscape is wild. It is sculptured peaks and rugged gullies as far as I can see; immense buttes and peaks tower in the distance. Spots of green can be seen and cliffs are spotted with scrub trees. I hike through a beautiful forest of graceful trunks and twisted branches. Peaks are volcanic masses eroded by centuries of wind and rain, lending a dramatic effect to the vista. Steep cliffs, barren rock and the vast expanse of the rift spread out for miles. Upon closer examination, more colors are seen. Lichens of reds and purples thrive in this environment. Tints of minerals are evident in the rock.

The day is pleasant, the air thin. Unfortunately, the haze of pollution hangs over everything. It restricts visibility but at the same time shrouds the landscape with a mysterious element. It is all hauntingly beautiful.

These isolated peaks, gullies and grassy plateaus support several unique animals indigenous to Ethiopia. It is home to the Walia or Abyssinian Ibex. Once hunted to near extinction, their numbers are increasing thanks to conservation efforts. About 500 survive and only at the highest peaks of the park. The ibex are members of the goat family and males can weigh up to 280 lbs. Their distinctive long horns curve backwards and can reach 43 inches. They love this altitude and one would think just that fact would protect them. 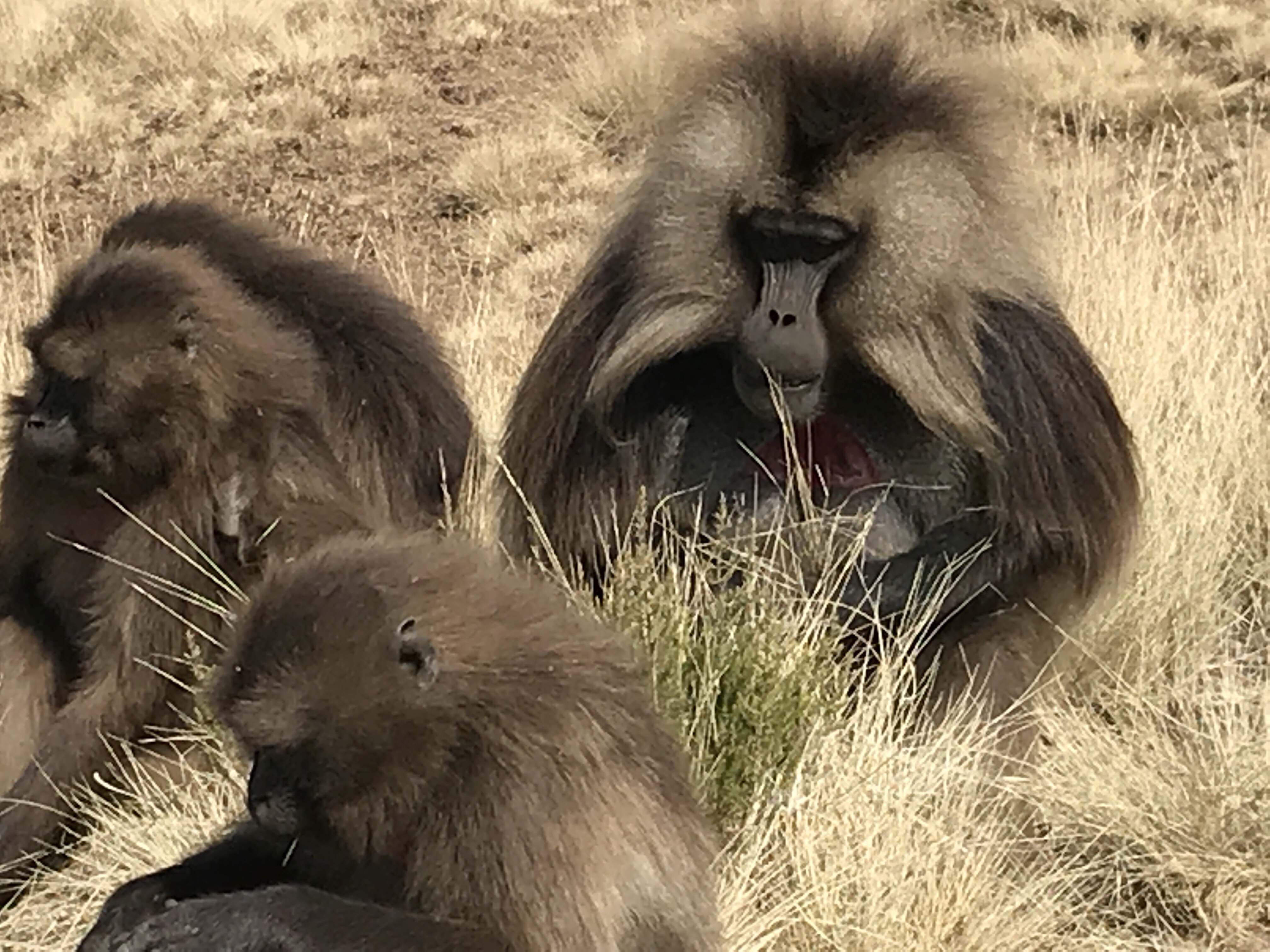 There are also large groups of foraging Gelada baboons, sometimes called the bleeding-heart monkey because of their bright reddish hourglass-shaped patch of skin on their chest. I’m told that this patch sort of replaces the bright red butts typical of their baboon cousins. The Gelada is a species of Old World (as opposed to New World) monkey found only in the Ethiopian Highlands and are actually not baboons but members of their own genus of “beast-ape.” The male has big, big canines but a pretty mild disposition, unless you are another male gelada.

Geladas are covered in dark brown hair with black arms and feet; their tail ends in a cute little tuft of hair. Adult males can weigh up to 40 lbs. and have a long, heavy cape of hair on their backs but a hairless face with a short muzzle that is closer to a chimpanzee’s than a baboon’s. Their walk and flowing mane is very distinctive.

The gelada is a unique animal, living in small communities of one alpha male, about 7-8 females and their young. The group is seldom larger than 17-18 members. However, they travel in large troops of 200-300, more for safety than sociability. This is a matriarchal society and the oldest female calls the shots, including where to nest for the night and forage during the day. All females in a family are related.

The gelada is the only vegetarian monkey in the world. They feed solely on the grasses of the plateaus, nourishing on the grass roots during the dry season. Because of this foraging diet, geladas must spend most of their day feeding. To do so, both hands are continuously busy digging and picking. Geladas will often scoot along on their butts in order to keep their hands free for grazing. I listen to the sound of their scratching into the turf and ripping grasses from the earth as they stuff a root into their mouth, scoot and continue rapidly digging with both tiny but strong hands for another root.

Flowing manes of the male gelada

One can safely sit among the gelada and watch their communal behavior. Geladas are very vocal. Females of other families are warned to keep their distance. Females talk and discuss their day. Babies romp, climb and jump while playing with others. When the troop moves, the young jump on mother’s back to catch a ride to the next patch of grass. Then off they go to play and explore. And though the alpha male may be busy grazing, grooming or “servicing” his wives, he will not miss the intrusion of a younger male. He is prepared to fight for what is his. And the females expect him to do so, and win, or they will quickly befriend the victor. Ah, the fickleness of the female gelada.

The remainder of their day is spent in grooming. Typical of monkeys, much of their communal behavior is reinforced through grooming. I am fascinated watching a female groom through the beautiful long mane of the male. But it is not one-sided. After minutes of grooming, the tables are turned. The female gets her turn at being groomed. He needs to keep his fickle females happy or face replacement.

Males only reign as the leader of the family for a few years. As he ages, one of the younger more robust “studs” wants a readymade family. He will challenge the male who, if he isn’t able to fight off the challenge or make a strong showing, the females will desert for the younger male, even assisting the younger male. What happens to the older male? Often, he becomes a “nanny” for the young and is allowed to stay with the family, a very rare behavior in the animal world.

I was able to walk among several troops of geladas. We humans were of no interest to them. Toward late in the afternoon, the matriarch decided where they will sleep for the night. Geladas are not tree climbers but prefer the protection of the steep cliffs of the escarpments. Here, they are safe from predators like the hyena and serval cats. Geladas are practiced at scaling cliff faces and find tiny ledges and niches for the night. The troop slowly meanders off, stragglers ripping up a few last tuffs of grasses as they rush to stay together. Safety in numbers and time to go. 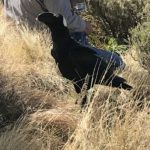 There are other creatures of this plateau, including Menilik Bushbucks, a shy small deer about 35″ tall. I was fortunate to see two dart up the hill. There are also some interesting birds. One in-your-face bird is the Thick Billed Raven. He was a large, soaring presence during our picnic overlooking the mountains. The raven has a distinctive white cap on his head and very thick beak. They will not hesitate to land and hop past looking for handouts.

Cliff-nesting birds are also common, including the Lammergeyer. I’m not a ‘birder’ but this Old World Vulture is impressive with his 8-9 ft. wingspan. It does not have the typical bald head of a vulture and its feathering and color reminds me of a hawk. This bearded vulture is the only known animal whose diet is almost exclusively bone, probably good for adapting to this environment. Its dark gray and rust feathering around neck and legs and white, creamy colored head makes him easy to spot.

The Simien Lodge, located at an altitude of 10,700 feet, is a series of comfortable round huts with excellent views of the sunsets and sunrises. The evenings are dark, sky starry, and temperatures cool to cold. It has been a welcome respite from the bustle of the multitudes. No wonder the geladas enjoy their home so much. 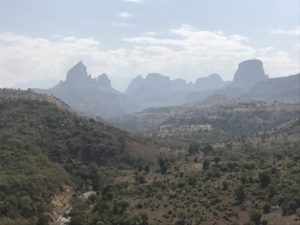 We descend the Simien Mountains into the plateaus of northeast Ethiopia. The scenery is spectacular, consisting of immense buttes, jagged peaks, forests, painted mesas and one winding gravel road built by the Italians. There are a few farms, fewer villages. Yet we can stop for a photo of the isolated mountains and within 20 seconds children come running to greet us.

Ethiopians refer to this grand land as the “Chessboard of the Gods.” The Siemens – the work of Mother Nature at her awesome best.