History repeats itself. Sort of.

About 9 years ago, a good friend invited me along for a Moscow to Vladivostok Trans-Siberian train trip. There was one small caveat. We would go in winter. Not letting a little cold deter me from an adventure, I went to a resale shop, bought a long wool coat, dug my ski hats and gloves out, and met her in Moscow in March.

Time seems to have dulled my memory of just how cold Siberia can get in March, where the largest freshwater lake in the world freezes several feet deep for five months of the year. So, as a refresher on cold, I flew to Minneapolis for a few days. Just how cold can it get in December?Gosh! I’m a California girl. I kayak in the bay in December and have flowers blooming in my yard. My nephew and his family live near Duluth so I drive through Minneapolis often. Last trip, I once again told myself, “Self, you need to check out local sites, particularly St. Paul’s Cathedral.” That was in July. I currently question my sanity in doing this sightseeing on the first day of Winter. 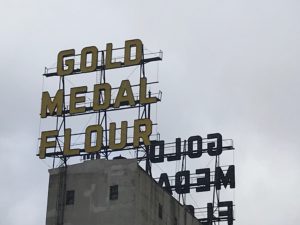 Arriving into Minneapolis airport at midnight, I put my early budgeting self to shame. I’ve booked a room at the new Intercontinental Hotel at MSP. When I drove by last July and saw this massive structure just under the nose of the airport, opening in early fall, and within walking distance, it occurred to me that I am worth it. This makes up for the nights I slept on a train or on the beach, or shared a hostel room with others also traveling on a budget.

What does an extra $100 or so get me? The ability to arrive late and walk across a skyway bridge and into the hotel. When it comes down to the value, there is little except convenience, and even that is limited. One must use the hotel shuttle to reach the Light Rail.

The Minneapolis Light Rail has its own mobile APP, is inexpensive for tourists and the way to go. I awake to a cloudy day, cold temperatures near freezing, and take the Blue Line north into downtown Minneapolis. There are two main lines, Blue and Green, and they access everything I want to visit. Because there are different prices depending upon when I travel, like rush hour, it is simpler to just buy an All-Day pass for unlimited travel by bus and rail. The mobile app accepts PayPal.

In 1962 Minneapolis began connecting downtown buildings using a walkway system. And no wonder. While summer temperatures are comfortable, winter can be brutal. It proved so popular more walkways and bridges were added, but not necessarily in a logical, lineal way. Today, the Skyway guide encourages one to “get happily lost.” As the largest, contiguous system of enclosed, second level bridges in the world, traversing 9.5 miles and connecting 80 city blocks, getting lost is fairly easy to do. But, it is a warm lost!

That the skyways were conceived to escape Minnesota’s weather is a folk tale. Instead, they became a solution to reroute pedestrians off crowded sidewalks. And of course, building owners recognized the walkways as a boon to property values by linking to retail, restaurants, bakeries, hotels, gyms, groceries, liquor stores, banks, entertainment venues and even a church.

Buildings are connected in a variety of creative ways so it can be somewhat like wandering through a system of warrens that are somewhat reminiscent of what I imagine my gophers have made under my yard. Signs were added and even a Mobile APP created in the hopes one wouldn’t get hopelessly lost. Both pretty useless. Wandering the skyway is like Alice hoping she can find her way to the tea party.

It was easier to just ask a local, easily recognized as they wear far fewer layers of clothes and are not using their phones to discover their location. Or, ask kind ladies at one of the randomly placed Information Desks. Actually, I found Google Maps helpful enough to know what direction to turn. When all else, failed, I just exited and used the street. And if you travel here in February, there is the Skyway Open, a mini-golf event.

So, I spend my day wandering the Skyway, avoiding the cold outside, and looking out over the city of Minneapolis. There is a plethora of food and coffee bars so no fear of starving! 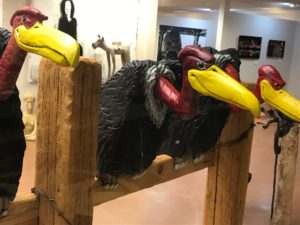 Wood carving by John Gallagher: “Buzzards on a Fence” – “My Lawyer, My Accountant, My Banker”

With a name like Museum Louvre It or Leave It, I must visit. A married couple, the Finks, gifted their original and rather eclectic art collection to this contemporary museum. Although the collection includes the art of some of today’s known artists, it provides an opportunity to see the works of lesser known and up-coming artists in many media. The museum displays a wide range of primitive to humorous art in mediums of oils, watercolors, ceramic, wood and bronze. Displays are a cut above most contemporary art museums I have visited.

The Guthrie Theater is open daily for visitors. The architecture, multiple stages, costume shops, and views are superb. There is a Backstage and Architecture tour on weekends but I am still welcome to explore the building and enjoy the river views. There are also regular stage performances and concerts.

Next door, right under the Gold Medal Flour sign, is the Mill City Museum. It also offers a wide selection of tours, unfortunately many just in summer. But a Mill Tour explores this National Historic Landmark and its history. The original building functioned as a flour mill. In fact, the Tour Pillsbury A Mill points out that this was the largest flour mill in the world for many years. 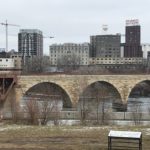 Like the Guthrie, the Mill City Museum offers spectacular views of the river and also overlooks Minneapolis’ famous Stone Arch Bridge and Mill Ruins Park along the Mississippi River.

Stone Arch Bridge is a former railroad bridge crossing the Mississippi River at Saint Anthony Falls. Its length is 2100’ with a width of 28’ supported by 21 stone arches. It is the only arched bridge made of stone on the entire length of the Mississippi River. Construction began in 1881 and completed in 1883. Built by James Hill for his Great Northern RR, it was originally defamed as “Hill’s Folly.” The bridge is now a pedestrian and bicycle bridge and during summer is a focus of numerous festivals. In winter, it just looks cold.

For my second day of exploration, I once again board the Blue Rail to head north to the US Bank metro station where I connect to the Green Line to travel east across the Mississippi to the city of St. Paul. 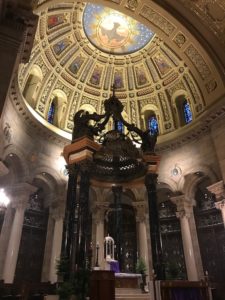 The Cathedral of Saint Paul is a Co-Cathedral of the Archdiocese of both St. Paul and Minneapolis and sits atop Cathedral Hill overlooking downtown St. Paul. It is the fourth tallest church in the U.S. and its distinctive copper dome can be seen for miles. I have always wanted to visit and this is my chance. There is an excellent 1-hour daily tour at 1:00 p.m.

St. Paul’s, the third largest church in the U.S., opened in 1915. It has grown considerably since the first church began in 1841 as a small log chapel in an area referred to as Pig’s Eye. At that time the log chapel was about 25×18 feet. Since then, the structure has continued to grow in stature. By 1851, its first Bishop was named and the little log chapel became a cathedral. Aspirations and walls grew but could not keep up with the population. By 1853 a third cathedral was already being planned. This one was built of stone and located at St. Peter and Sixth Streets in downtown St. Paul. This church measured 175 x 100 feet. But by 1904, the building of the current cathedral was already in progress.

The French architect of the 1904 St. Louis World’s Fair (of Judy Garland singing fame) was also the designer of St. Paul’s. He had a budget of $1 million, and he based the cathedral on the designs of the spectacular Sacre-Coeur Basilica in Paris.

The open design allows visitors unobstructed views of the altar and pulpit. The cathedral dome is 76 feet in diameter and 186 feet high. Gold leaf was added in the 1950s and in 1987 the Cathedral added five bronze bells cast in France. Much of the overall construction can be said to be local. The exterior walls are Rockville granite from St. Cloud, interior walls are American travertine from nearby Mankato, and interior columns are marble. 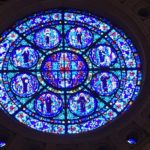 The interior is illuminated by twenty-four beautiful stained-glass windows with sunscreen blinds depicting singing angels and there is a wonderful rose window in the transept. Huge marble statues of the four evangelists, Matthew, Mark, Luke and John, are set into the four corners of the Church. Each statue is about 11’6” tall and weighs eight tons.

The cathedral also has six chapels dedicated to the patron saints of the European ethnic groups and missionaries who settled St. Paul (Italians, French Canadians, Irish, Germans, Slavs). Recognized as a National Shrine of the Apostle Paul, its most distinguished visitor was Eugenio Pacelli, just before he was elected as Pope Pius XII in 1939.

In general, my two-days in Minneapolis have been a worthwhile layover. Catching the light rail to return to my hotel, I look forward to a warm toddy. Tomorrow, I fly to a destination that is 60˚ warmer. I look forward to loosing the layers and digging out my t-shirts.