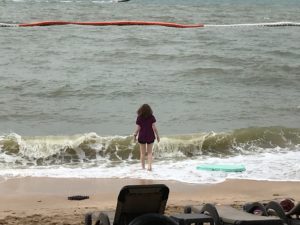 There are various ways to get the 175 miles south from Kanchanaburi to Pattaya Beach. Trains depart for Bangkok with transfers from there. Buses and vans will accommodate. We have been there and done that. I opt for air-conditioning, a comfortable ride and guaranteed seat; a taxi service wins my day. Taxis, unlike in western countries, are fairly reasonable in Thailand. No exchanges, no transfers, just door-to-door service, for about $100. I chose convenience as we are driven south to Pattaya Beach, located on the east side of the Gulf of Thailand. And we knowingly drive toward the eye of a storm. My State Department and local weather warnings alert me to Tropical Storm Pabuk which is moving across the southern regions of Thailand. Heavy rains, flooding, and strong winds threaten both the Gulf of Thailand and the Andaman Sea. Airports and ferry services are closed for safety reasons. The first tropical storm to make landfall in Thailand in thirty years, sustained winds could reach over 40 miles per hour when it hits land tomorrow; waves may reach 10-50 feet! However, according to travelers on Facebook, Pabuk is not enough to keep them from their beach vacations. Nor us.

Thailand is known for its beaches, beautiful water, and year-round swimsuit weather. For me, I am satisfied our swimsuits will be dipping in waves further north of the storm’s path. I am beyond the age of wanting the excitement of even mini-typhoons.

Each Thai beach has its own personality. While most boast luxury resorts, some stretchs of sand are known for their distinct atmosphere: party, gay, family, surfing, shopping, nightlife…all appear to be destinations of sun and fun. A previous host’s reaction to Pattaya’s personality was “prostitution,” but we’ll see.

Pattaya is on Thailand’s eastern Gulf coast just south of Bangkok. A quiet fishing village as recently as the 1960s, like most of Thai beaches, it is now lined with resort hotels, high-rise condos, shopping malls, cabaret bars and 24-hour clubs. Downtown has a long stretch of sand, lots of cafes and bars, boating activities, and the ubiquitous massage parlors. It also has huge malls, endless shops, Hardrock Cafe, and the typical glitzy action of beach towns around the world. Our stay is at the Modus Beachfront Resort, a splurge because we earned it. The sea view, small sand beach, pool outside our patio door, and seeming lack of prostitutes, are perfect for a couple days of kickback.

Probably the most iconic site in Pattaya is just a few yards from our hotel. The Sanctuary of Truth is an intricately carved teak wood building overlooking the spectacular bay. Considered a cross between a temple and a palace, the 340-foot-tall structure was funded by a local business tycoon in 1981. Its purpose was to symbolize “a philosophical truth, which tells of the importance religion, philosophy and art has played in human development and the folly of neglecting morality and spiritual contentment in the pursuit of materialism.”

I think his goal failed.

What immediately catches my eye is the ridiculously expensive admission of 500 baht. This gets us onto the grounds of a “park” that is something like a C-Class Indiana kiddie carnival and petting zoo. From a row boat for feeding the baby shark, to feeding the goats, to elephant rides or pony rides, prepare to pay and pay and pay.

The “temple” is more an achievement in Thai craftsmanship than for seeking any symbolism or philosophical truth. Perhaps having to wear a hard hat detracts from its solemnity. Intricate, detailed carvings of elephants, people, mythological gods and creatures adorn every inch of surface both inside and outside the monument. All of this beautiful teak carving is untreated leaving it victim to the elements. And the elements of the beach are unforgiving. As one who lives at the beach, I know nothing here is permanent or can remain this beautiful without constant work. Beach weather is relentless. And indeed, teak wood is no exception as older parts constantly surrender to the climate and need to be replaced. Like the painting of San Francisco’s Golden Gate Bridge, the work here is never done. And like my beachfront decks at home, maintenance is an on-going, never-ending job.

The carvings and sculptures honor the seven creators without which Man cannot exist: Heaven, Earth, Father, Mother, Sun, Moon and Stars. Elements of religion are present with carvings suggestive of Buddhism, Brahmanism, and Hinduism. But, such reverence is fleeting. Just a few yards away, its surrounding gardens are more typical of the rest of Pattaya. There is a shooting range, demonstrations of sword-fighting, elephant rides, pony rides and a plethora of souvenir stalls. Oh well, so much for sanctuaries.

In fact, for me the drawback to Pattaya is its similarity to a tawdry version of the Magic Kingdom and Epcot. The entire region is like one theme park after another. Most of the top things to do are definitely created for the young tourist and border on the garish for the rest of us. As far as this traveler is concerned, to be avoided are: 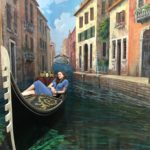 Art in Paradise takes the traditional art gallery and completely ignores any resemblance to them. Instead, the “art” is enlivened by visitors who become part of  three-dimensional paintings through manipulation of optical illusions and perspective. Stand in the right position and take a selfie and you become part of well-known masterpieces, float in a Venice canal, or share space with a raging elephant or Tyrannosaurus Rex. It’s pretty god awful. It is kind of like “death by selfie” without the danger.

Walking Street is advertised as “quite unlike anything else in Thailand” and I suspect where more of the working girls may hang out. There is also the ubiquitous Ripley’s Believe It Or Not that one generally finds in areas like this. The Million Years Stone Park and Crocodile Farm, Frost Magical Ice of Siam, and the Ramayana Water Park brochures are found across Pattaya. How about a park containing replicas of a 17th-century French Versailles, Stonehenge, or Renaissance garden? The Four Regions Floating Market, an area of endless shops and kiosks selling everything from souvenirs, food, handicrafts, clothing and art? If my previous blog concerning the exploitation of elephants and the trend toward ecotourism hasn’t turned you from watching them preform tricks and riding their backs, Pattaya Elephant Village will accommodate you.

Choose your style. And while visiting, learn your sign:

I was born on a Sunday so my Buddha is Pang Thawai Net or “Seven Days Looking.” The Sunday Buddha is standing with arms crossed in front of his waist with the right hand covering his left. This image represents the time just after Buddha obtained enlightenment when, in gratitude, he stood and admired a bodhi tree for one week without blinking an eye. Born on a Sunday, I am respectable, wise, loved, and likely to be in a professional occupation. My unlucky day is Friday and unlucky color is blue; my lucky day is Wednesday and my color is green.

Mikaela, my niece, was born on a Wednesday so her Buddha image is Pang Umbat. He stands and holds an alms bowl with both hands and this represents the time Buddha returned to visit his father after four years. In the morning, monks gather to collect their alms but Buddha’s father viewed it as begging for food. Buddha calmed his father by explaining Buddhas were to be available to their followers who devotedly brought food for them. Being born on Wednesday, my niece is polite, artistic and emotional, most likely to work creatively. Her unlucky day is Tuesday and unlucky color is pink while Wednesday night is her lucky time and lucky color is green.

It has been a busy, noisy two weeks about Thailand and Pattaya Beach provides a lot of sand and strolling. It can be whatever you seek. One can hang around the pool and chill. Reality will begin soon enough.

For tomorrow, it will be a short taxi trip to the airport in Bangkok. From there, it is a long, long flight back to the reality of Minneapolis’ subzero temperatures. Even the gaudy, over-the-top carnival of Pattaya will be missed.