Exploring The Other Side of Bucharest

At the entrance to Strada Lipscani in Old Town is the mandatory Roman Statue recognized throughout the world. Rome’s she wolf nurtures Romulus and Remus. The Italians gave it to Romania in 1906 but it does look sort of out of place. But, it is a good entry point to Old Town. One can stroll these streets for hours enjoying the mix of architecture, much of it influenced by classical and French influences, Greco-Roman, neoclassical, and baroque; a little Art Deco here and a little communist efficiency there. 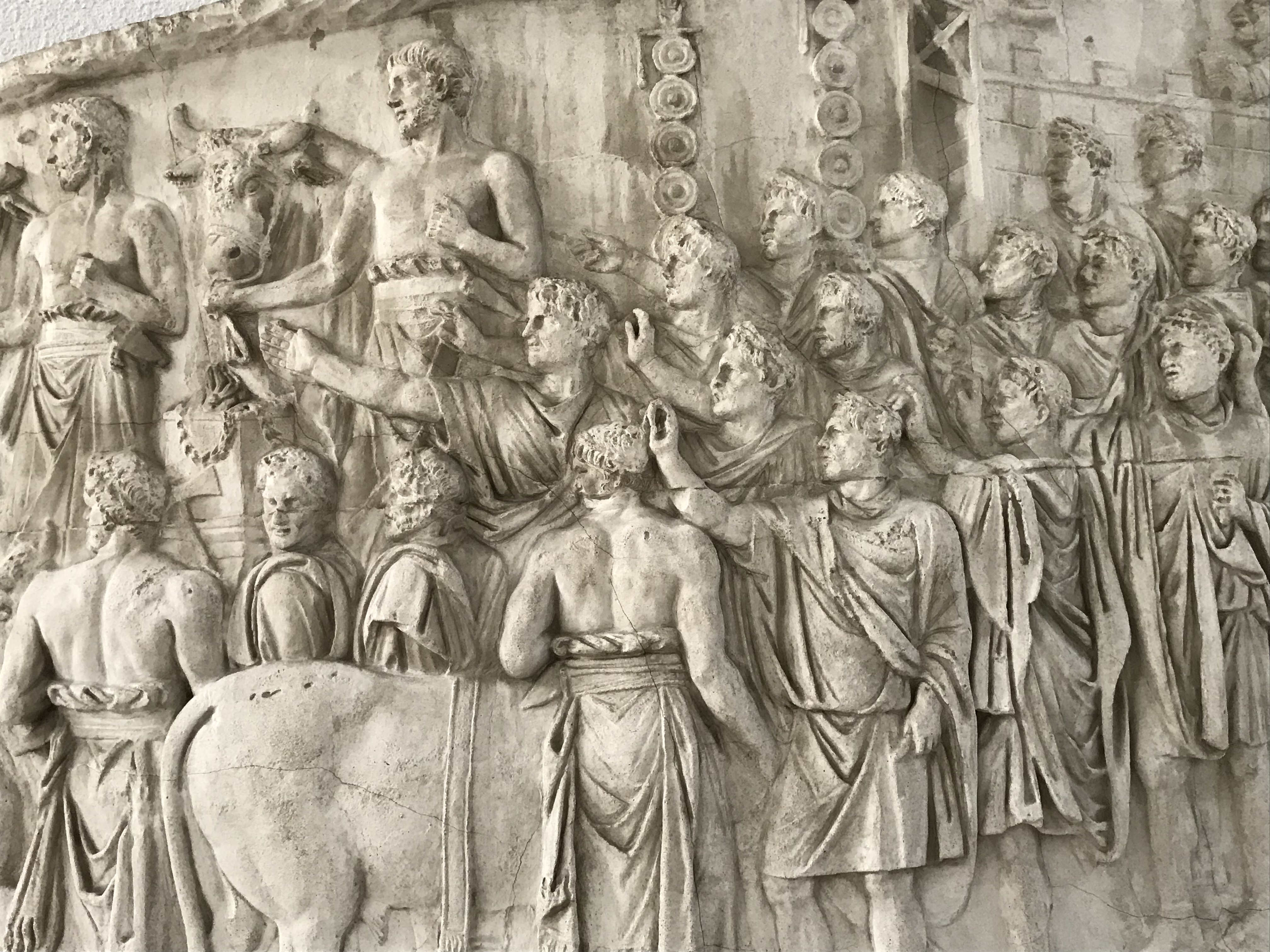 Old Town is home to the National Museum of Romanian History which includes wonderful displays and maps, though little in English, of the eras from the Paleolithic epoch through Dacian, Roman, the Middle Ages, into the modern era to the 20th century. Located in the historic neoclassical-style Post Office Palace, the museum is filled with religious icons and royal treasures, including spectacular pieces of gold jewelry and head pieces. But their pièce de résistance is an exact copy of Rome’s Trajan’s Column.

I have seen the original 115-foot column in Trajan’s Column atop Quirinal Hill in Rome. Erected on 12th of May 113, the column is one of the best preserved monuments of antiquity.  It commemorates Emperor Trajan’s victory against the Dracian’s and is best known for its spiral bas relief which details the victorious wars of 101–102 and 105–106 between Romans and Dracians.

I know the name of the Romanian-made car is the Dracia. But, I did not expect to see an exact, to-scale duplicate of Trajan’s column in Romania!

The territory of today’s Romania was inhabited as early as 513 BC by the Dacians, who were a Thracian tribe. The Dacians became a powerful state which threatened the regional interests of an expanding Roman Empire. It fell upon Roman emperor Trajan to defeat Dracian leader Decebalus in 106 AD. Battle scenes and Trajan’s triumphs are carved around the entire circumference of the Carrara marble column.

I have been learning about the Thracians and the Roman presence throughout Bulgaria and Romania. So now I know why the column is important to Romania. But how did it get here in Bucharest?

Archaeologist Emil Panaitescu was a director of the Romanian School in Rome and it was his dream to create an exact copy of the column. Created through the years 1939-1943, Panaitescu met his goal and today I can marvel at his accomplishment at the National Museum. 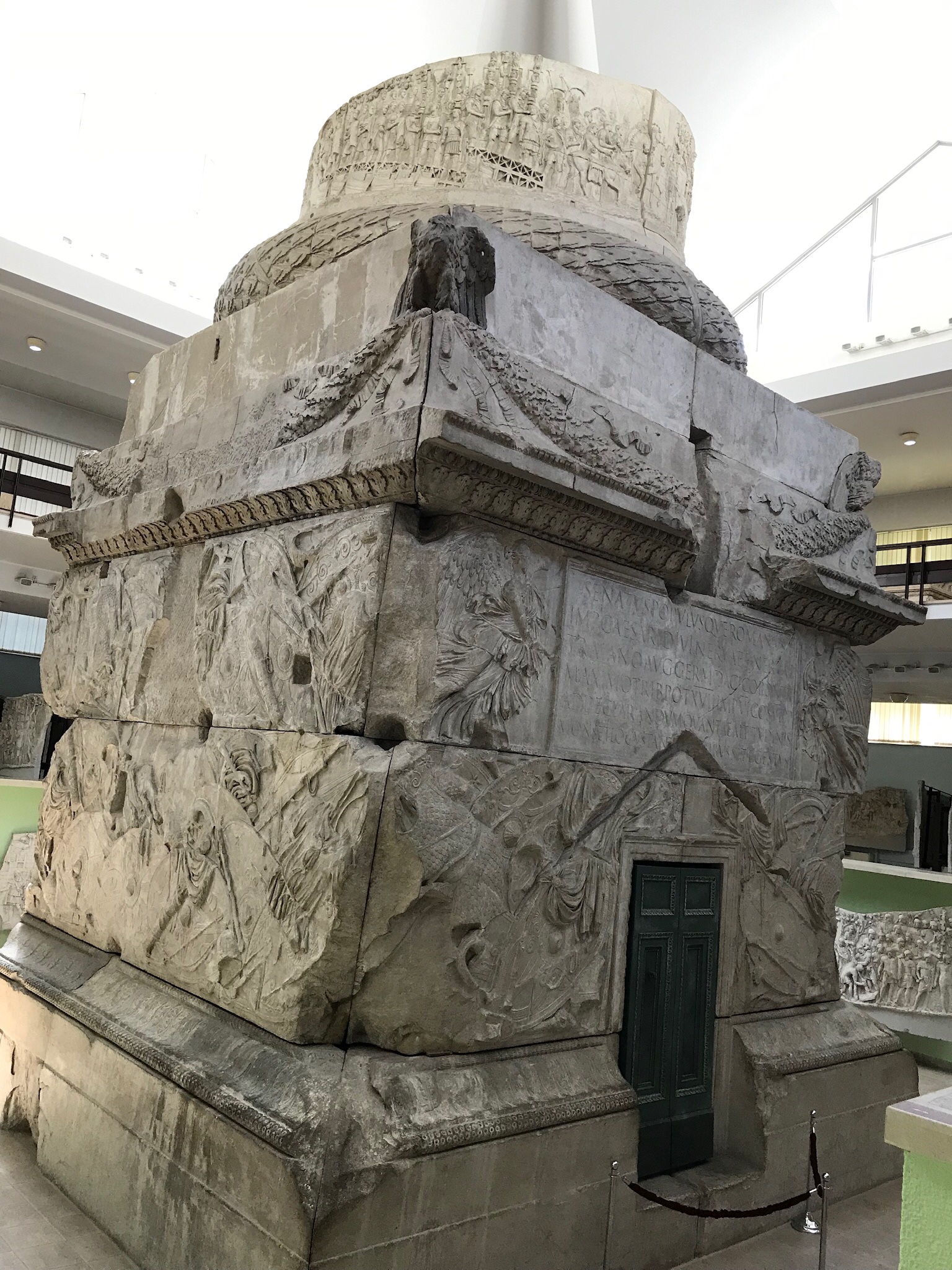 The pedestal of the column, all 20 feet of it, is on the ground floor, or Lapidarium, while dozens of friezes exactly recapture the battle scenes. In fact, this is better than the original because, while the continuous helical frieze winds 23 times from original base 112 feet up to the capital, here one can walk around the three floors from base to capital admiring the detailed carvings.

There is also a short film which explains how the original monument was built almost 2000 years ago. The column shaft is a series of 20 drums, each weighing about 32 tons. The 620-foot frieze winds around the column. Inside the column there is a spiral staircase of 185 steps to provide access to a viewing platform at the top! The capital of the column was over 53 tons of marble that was lifted 112 feet using a system of pulleys and manual labor.

Revolution Square was renamed in 1989 after the successful Romanian Revolution overthrowing the cruel regime of Nicolae Ceaușescu. The square also boasts the building of the former Central Committee of the Romanian Communist Party from which Ceaușescu and his wife fled by helicopter in December 1989 after a disastrous balcony speech. The speech was met with a popular revolt. Bullet holes can still be seen in some of the surrounding buildings. The equestrian statue of King Carol I of Romania, melted down by the communists to make a statue of Lenin, has since been replaced. The original was sculpted by the brilliant Croatian artist Ivan Meštrović (whose works can be seen from Split, Croatia to South Bend, Indiana where he died in 1962).

Under Ceaușescu, violent strikes broke out in 1987, but it was here in this square where things came to a head during a major speech by Ceaușescu on the balcony of Bucharest’s Piața Palatului (Palace Square). He had imported workers to support his balcony appearance. It did not go as planned. Instead of the usual forced cheers, boos were heard. The crowd decided approaching protesters were more to their style and joined them. Ceaușescu and his wife Elena had to be extracted by helicopter but the pilot landed in a field and dumped off his unwanted passengers. A comedy of attempts to escape followed. Ultimately, Ceaușescu was captured, tried for war crimes, and executed.

The Romanian revolution was more violent than its cousins “Singing” in Estonia and feeling “Velvet” in Czechoslovakia, but in December 1989, Romania achieved its independence.

Bucharest is a fascinating city, an eclectic mix of personalities, languages, and architecture. The Latin influence is obvious and one is more apt to hear Italian accent than a Slavic one. It is cosmopolitan and lively, sophisticated yet simple. Everywhere one looks, there is rebuilding and beautification, yet graffiti is the bane of every unmoving surface. The architecture is a mix of baroque, Art Deco, French renaissance, neoclassical, classical and communist efficiency. The traffic is horrendous but the entire old town is dedicated to foot traffic. There are surprises and oddities everywhere from the street named after and the bust created for Mustafa Kemal Atatürk, to the Christmas trees and nativity scene along a side street (there as a movie location). 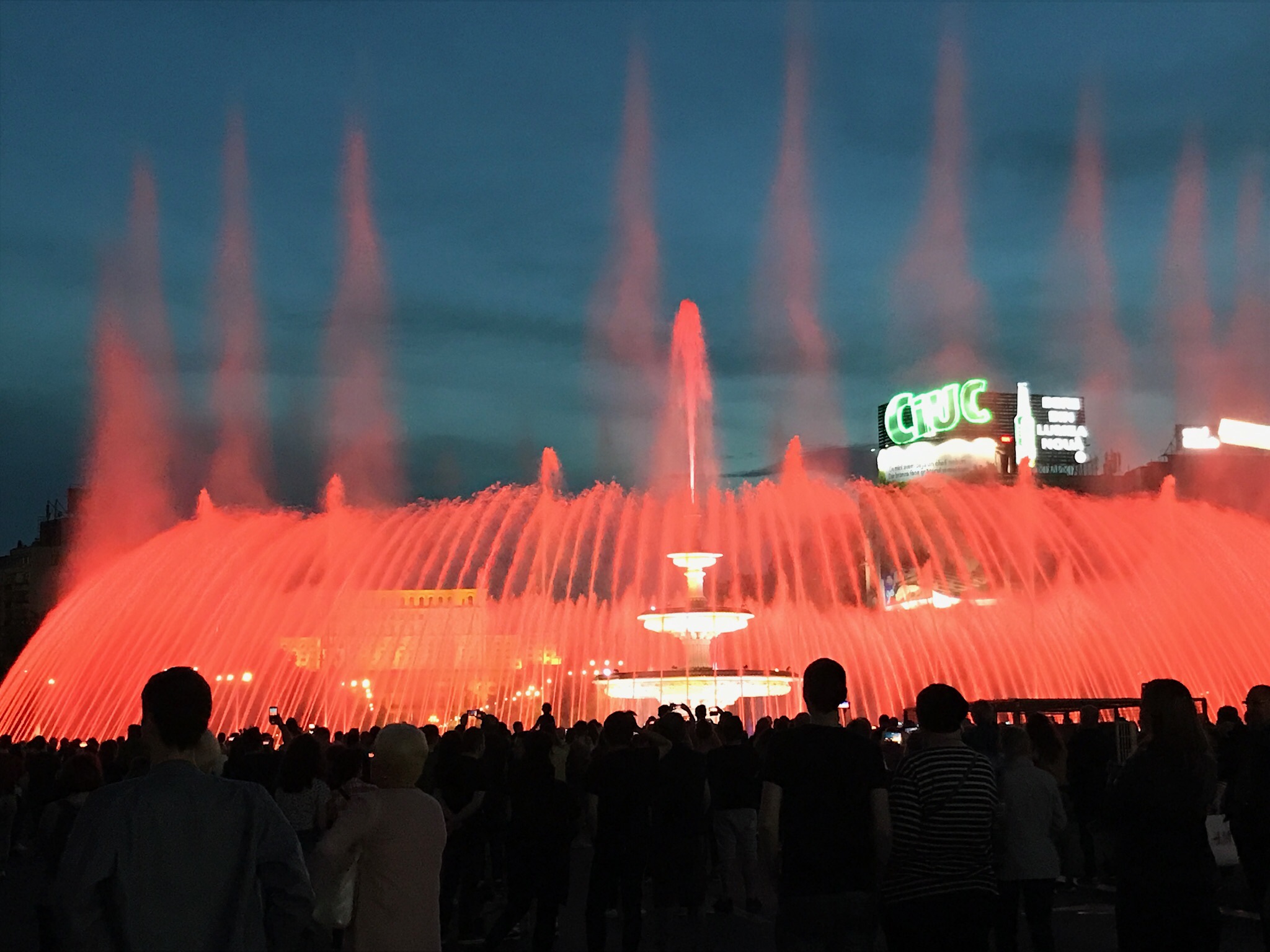 Bucharest’s Artesian Fountains in Unirii Square are pleasant anytime of the day but turn to magic at night with a stunning sound and light show at 9pm on weekends.

The fountains are massive with columns of water 30-40 feet in the air. The digitally-operated laser and light system controls a large configuration of 44 fountains. The music is a mix of classical and modern, from Tina Turner to Queen, Michael Jackson to Josh Groban, and the play of lights on water is a crowd pleaser.

Curtea Veche, in the middle of Old Town, is a large 15th century palace dating back to the reign of Prince Vlad Tepes III, best recognized in the world as Dracula. “The Impaler” once ruled his kingdom from these rooms. Today, it is an open-air museum of excavated medieval ruins but only seen through peeks in the curtains as it is under renovation. 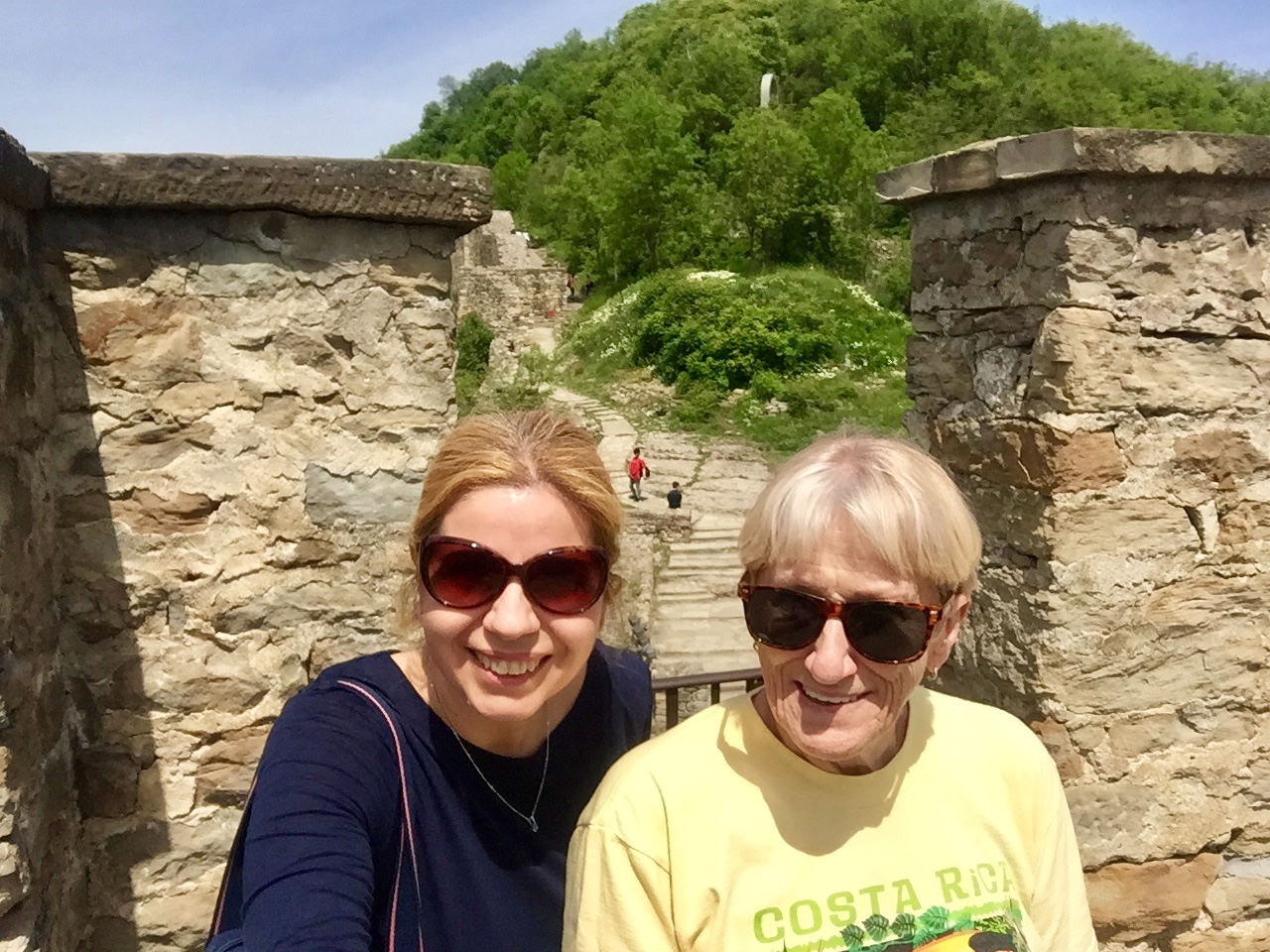 Just around Vlad’s corner are countless cafes. It is time for local beer and a fine meal. Time for my cousin Pam and I to review our experiences. Time for new-found cousins, born 5000 miles apart, to share.