Could not have been a more perfect day. As I listen to the thunder booming in the mountains to the east, a cloudburst rains down on the lovely gardens outside my window. Yet, throughout the day, visiting four monasteries and a few surprise sites, nothing but sun and mild breezes accompanied us. Only bummers for the day is our hotel has no Ursus beer and I must hang out the window for internet service. Trăiesc România! 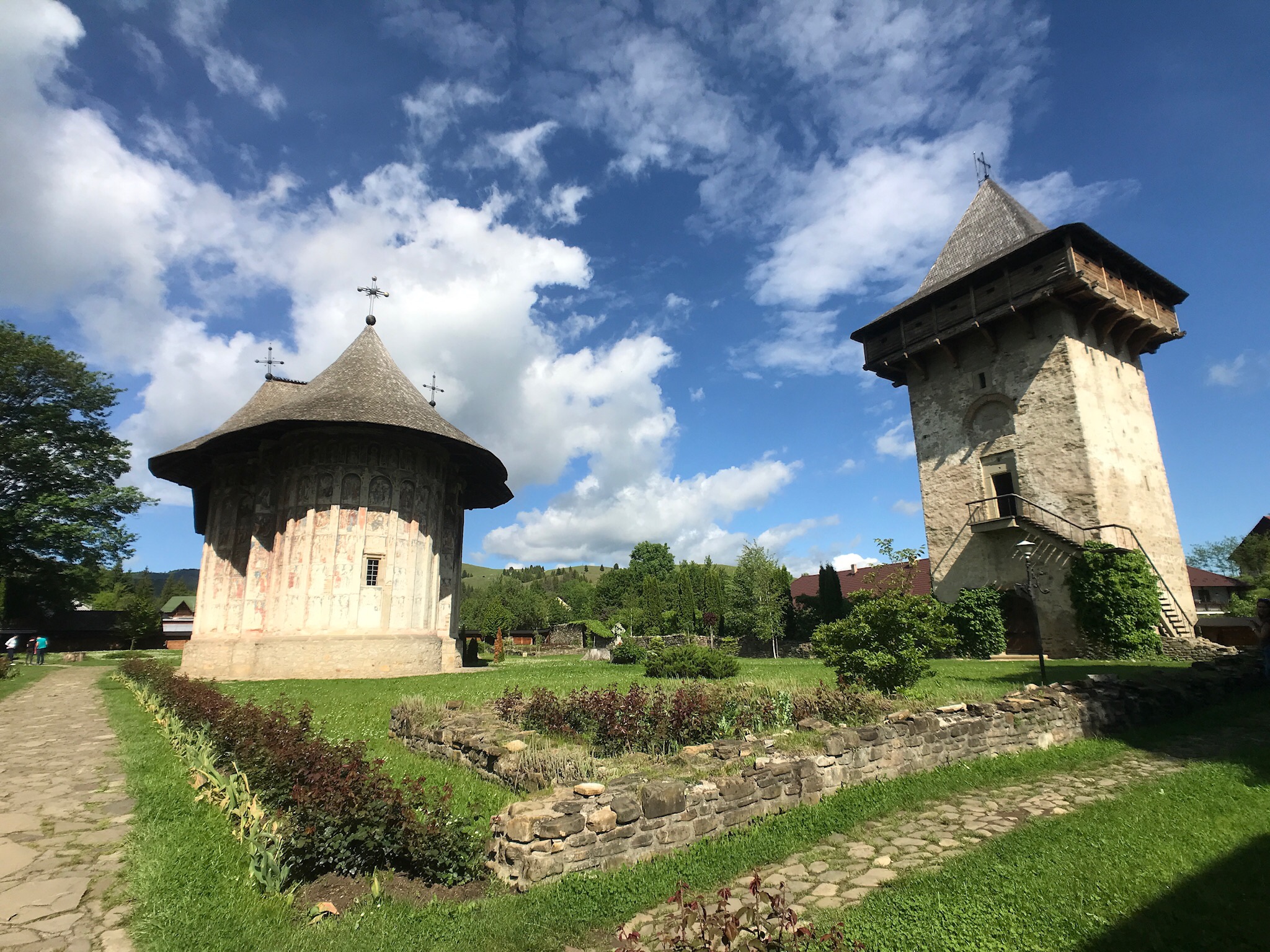 Our second day of painted monasteries begins at the Church of the Assumption of the Virgin and Monastery of Humor which was founded in 1530. This monastery also constructed a watchtower and high wall surrounding the complex in 1642.

It is a small church, but has a variety of beautiful frescoes dating from 1535, including one illustrating the Return of the Prodigal Son and one with a “humorous” depiction of the devil as a woman. Every church was painted with basically the same allegorical tales and the color and quality depended upon the painters. Here, the deep overhanging eaves help protect the frescoes from the bright Romanian sun.

The church, topped by a cross-shaped shingled roof, is without a steeple, indicating that it was built by someone other than a prince. The nobility got to build their churches higher and to include domes. The predominant hues of the frescoes are reddish brown with some rich blues and green combinations. An extremely valuable collection of icons from the 16th century is displayed in the monastery. And this church has been cleaned of soot and time so interior frescoes are brighter than most. It also has one of the more beautiful iconostasis I have seen in Bucovina.

Why do Romanians make the sign of the cross then point to the ground? It is symbolic of “dust to dust.”

As with all the painted monasteries, photos can only be taken outside and for a fee. There is a pleasant lookout tower for defense. Also, a newer Orthodox Church has been built nearby. 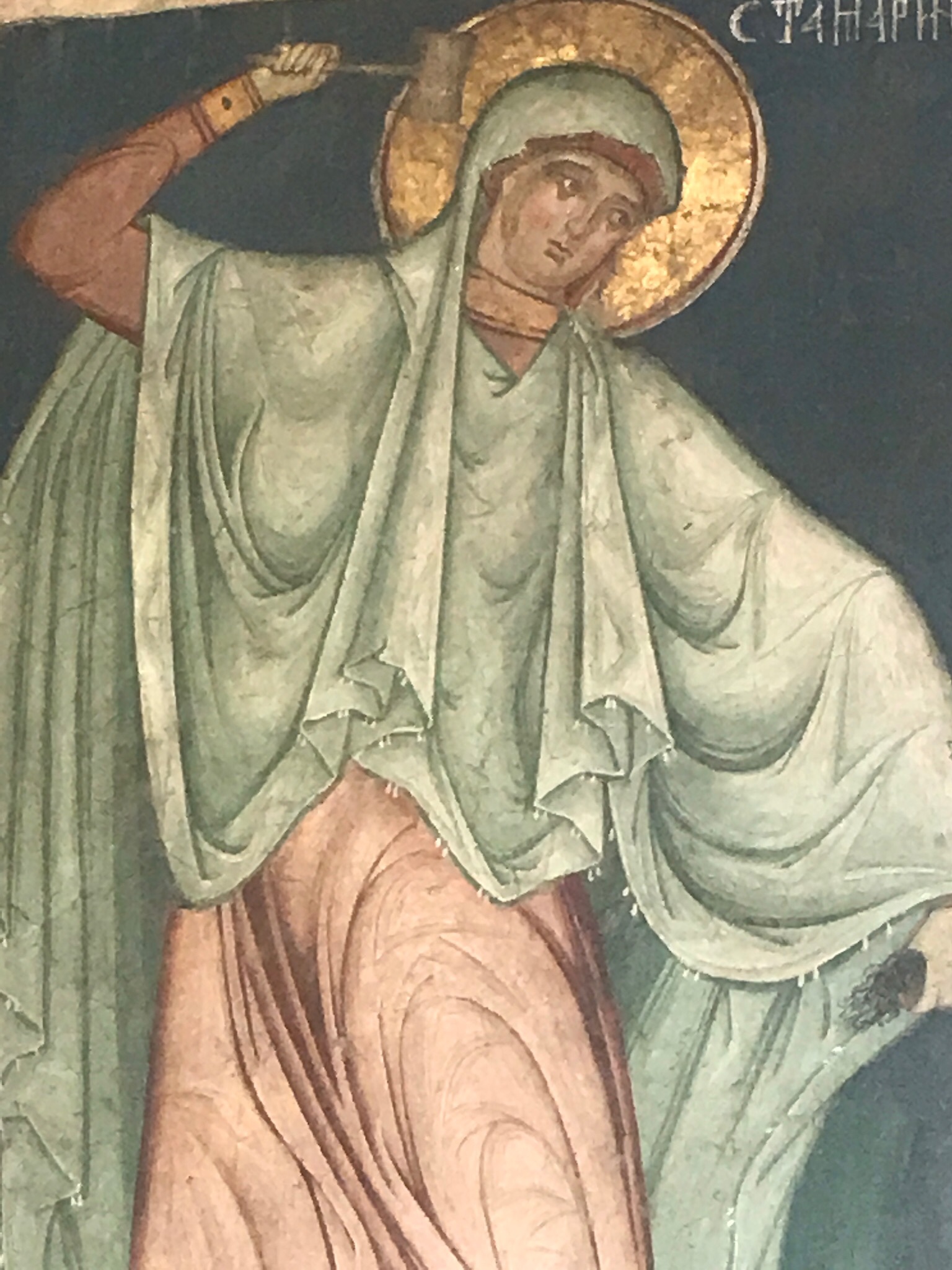 The Church of the Beheading of St. John the Baptist at Arbore is small but impressive. Dissimilar from most other painted churches, this one was built not by a prince but founded in 1503 by a nobleman named Arbore. It is the only one of the churches without a belfry. It was painted 40 years later by Dragos Coman, one of the greatest 16th century mural painters of Romania. The western wall vividly describes a scene from Genesis. Recently renovated, it is a small, narrow, simple but beautiful church.

Abore was painted by a single man in 1529. This same Italian man came back in 1542 to paint the outside. As an “outsider” from Italy, the painter introduced many new elements into his allegories. He was a master in the use of green colorings and even painted some people with their backs to the observer. However, Jesus’ eyes still point to the observer’s right, hinting that that was the correct path to heaven. 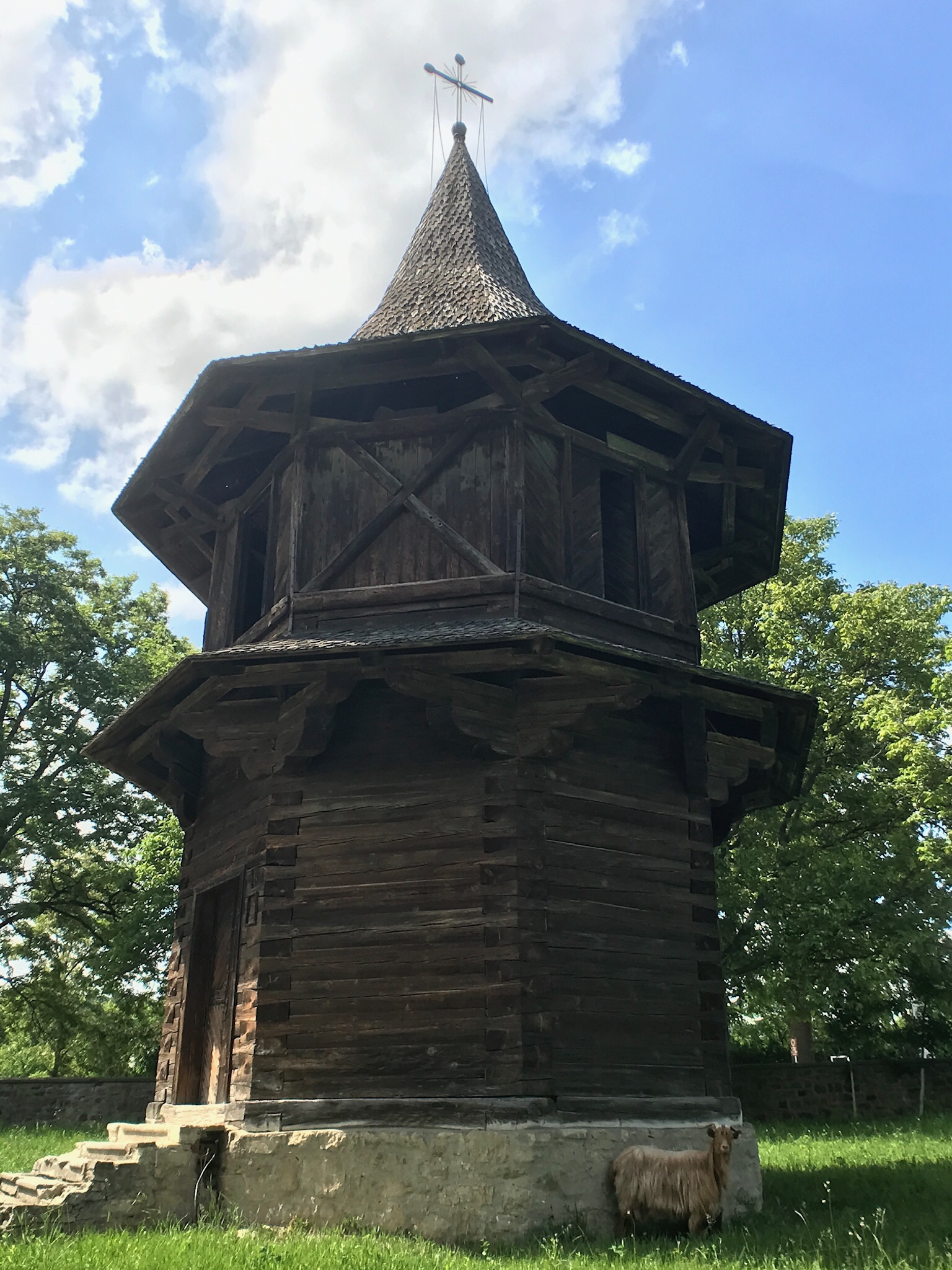 The Church of the Holy Rood of Patrauti was built in 1487 and dedicated to the Exaltation of the Holy Cross. This is the oldest surviving religious site founded by Stephen the Great, who built at least 40 churches. He liked to build and commemorate a church after each successful battle. Stephen had many successes and I’ve enjoyed several of his best efforts while driving around Bucovina.

Murals, dating from around 1550, are in poor condition but can still be enjoyed on the west façade. In 1775, soon after Bucovina was annexed to the Habsburg Empire, the monastery was turned into a parish church. Today, only the church and a wooden bell tower remain from the original monastic complex. The bell tower, gorgeous purple iris, and grazing goats are a picturesque moment in Romania.

The Dragomirna Monastery, renowned for its unique Orthodox architecture, is of sturdy rock construction and not painted on the outside like the others. To make matters uglier, scaffolds cover the facade as restoration is takes place. Built in 1609 with the walls added in 1627, Dragomirna is the tallest medieval monastery in northern Moldavia, about 131 feet, and recognized for its tall, narrow proportions and intricate details, mostly carved into stone. It is entered by a thick defensive wall and drawbridge.

It has a tall bell tower and at the corners of the fortress are four narrow square towers of stone. It certainly looks to have been built in anticipation of the frequent invasions by the Turks. The church is decorated with splendid frescoes, but they are to be found only in the altar and the nave. The interior is perhaps the most beautiful of the day. The same painters who adorned the monastery in Suceviţa painted Dragomirna.

Dragomirna Monastery was built for the Metropolitan of Moldavia, who is buried in the church. A nun walks around the church, beating a rhythm onto a plank, announcing to all within hearing that is is time for evening prayers. Climbing to the bell tower, she taps a faster rhythm. The tolling of the bell announces the call to prayer, a tradition practiced for centuries.

We stopped for some moments at Cacica, a Polish community first settled in 1794. The Poles were brought in by Austria to open and work the salt mines in the area. Even the Austrians knew they were the best at this job. The mines still operate today. Near the mines is the Catholic Church of Basilica Assumption.

The construction and interior has simple lines but along the exterior can be seen bullet holes in the brick and windows. In 1944, a group of Russian soldiers, drunk on beer or Pálinka, used the church walls for target practice.

The catholic community is excited and signs abound announcing the Papal visit on June 1st. Pope Francis has been invited by the Orthodox Patriarchy and is visiting four towns in Romania. 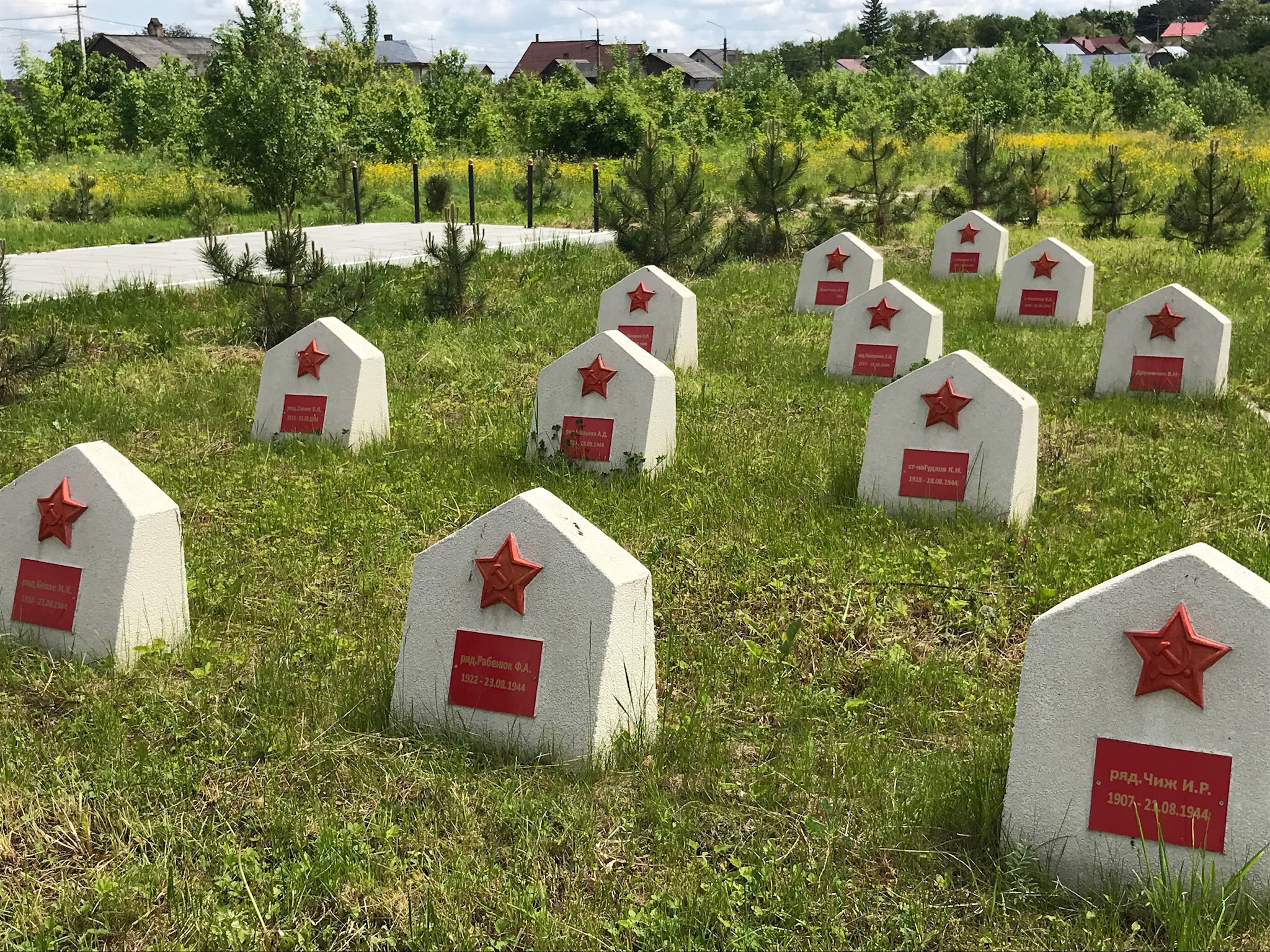 South of the village of Solca is the Parcul Eroiler, a cemetery dedicated to the Russians soldiers who faced the advancing Germans here in 1944. Some 140 Russians were trapped and killed here. A monument is erected in their honor and most gravestones are for unknowns. There is a list of soldiers who died in the battle but few were identified when they were interred.

One nun described her monastery as “the holy scriptures in color.” I would say such a description would be apt for every one of the Painted Churches and Monasteries of Moldavia. The churches, paintings, scenic surroundings and entire region of Bucovina are masterpieces of color.