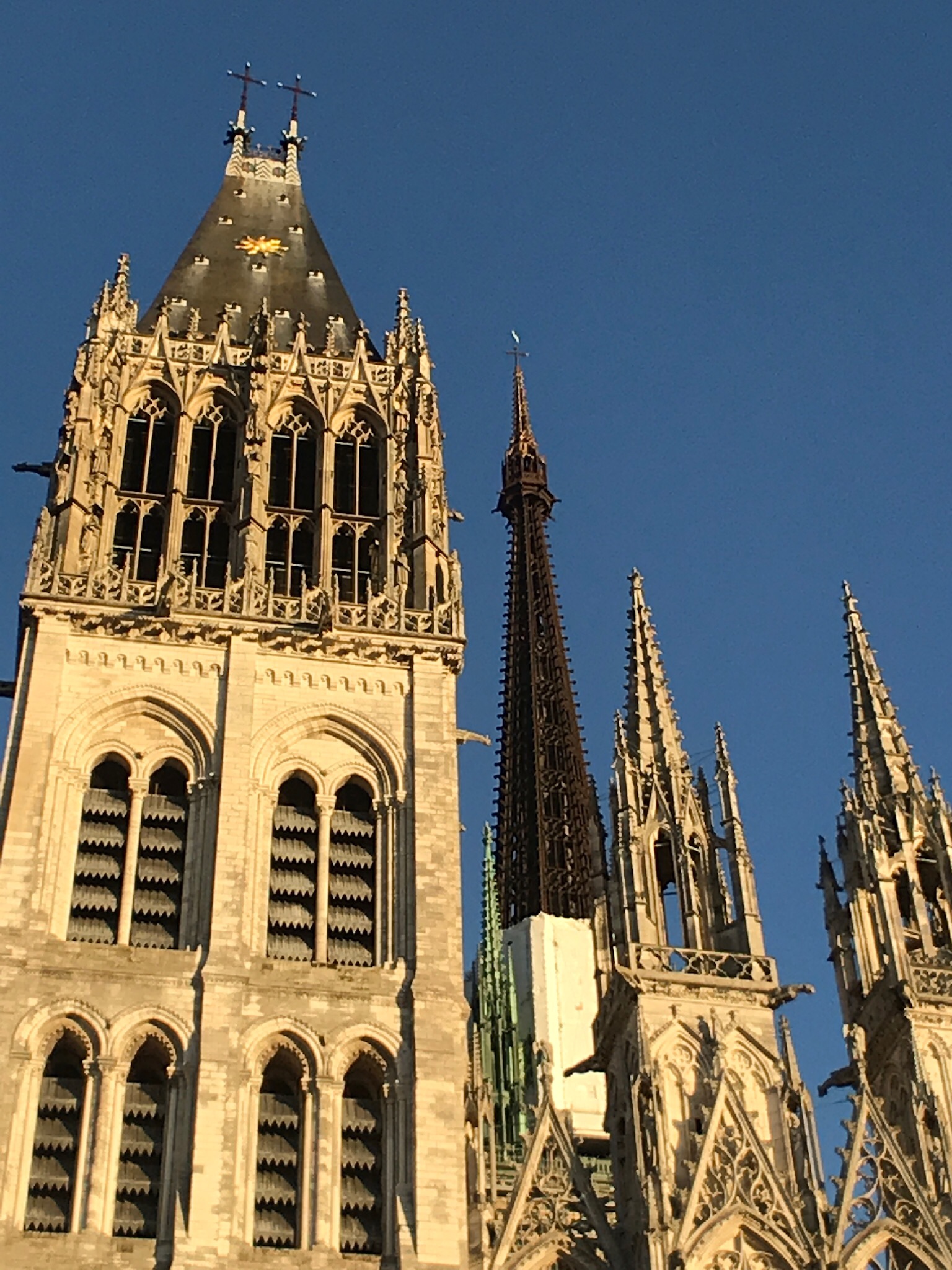 Walking Rouen has all the makings of meeting a fantastic, memorable city. It seems to have it all: history, architecture, parks, squares, cathedrals, and cafes. And brazen little sparrows who clean up you croissant crumbs while I enjoy a coffee. I am definitely putting Rouen on my list of favorite cities. There is much to see and do in this capital of the Normandy. And to hear: the bells of Rouen’s churches can be heard throughout the day.

First off, last week’s disastrous fire at the nearby Lubrizol chemical plant has left the city mostly unaffected. The town’s leaders have admitted that “The city is clearly polluted” and suggest taking precautions if one has breathing problems, like staying inside. But little can be detected of the original hydrocarbon odors and soot that floated over the city last week. There are warnings about toxins that could have polluted the Seine which flows near the plant. I hear there is the chance that fresh vegetables in the fields may be destroyed. 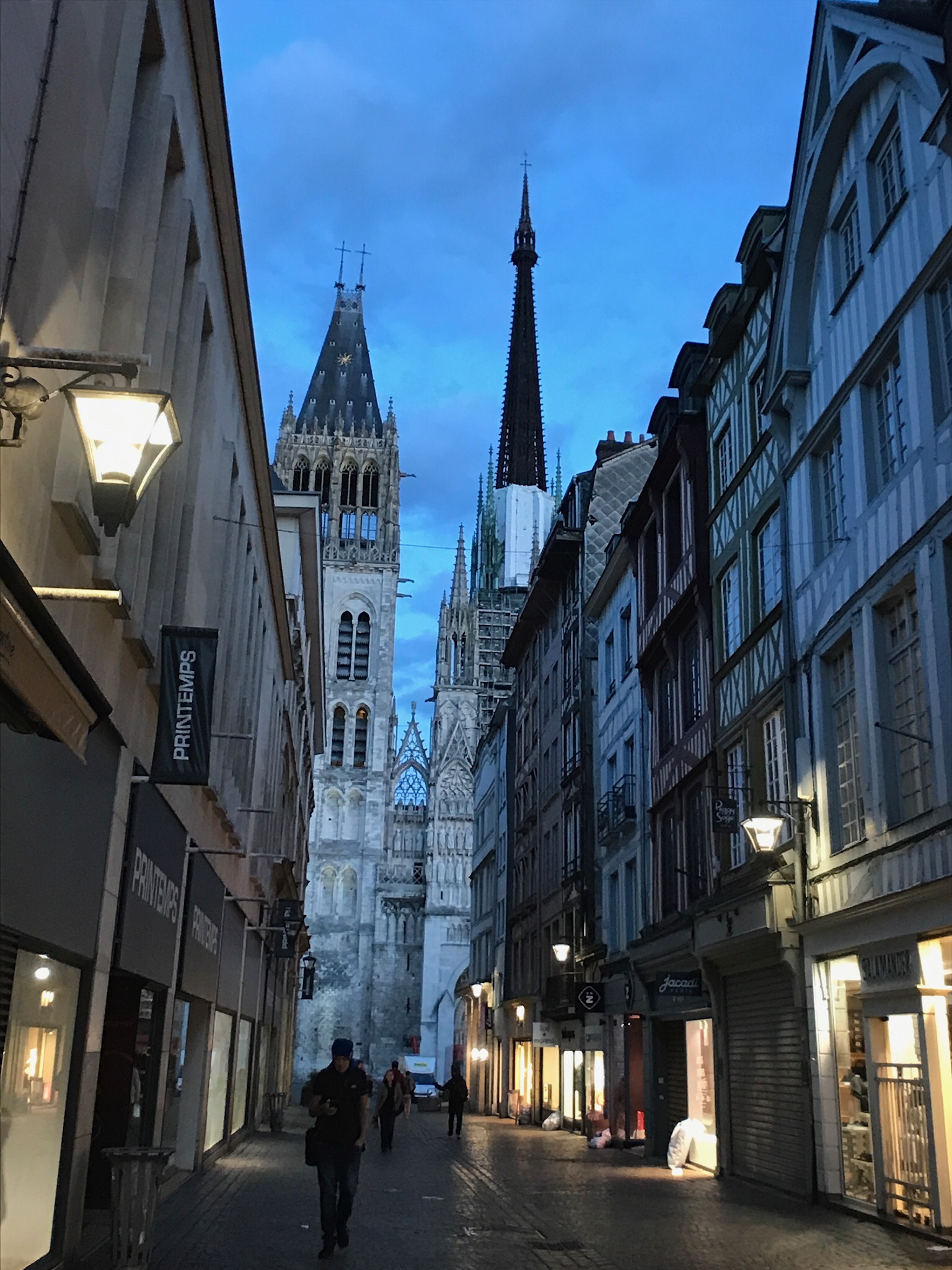 Rouen is a port city along the river Seine and I immediately recognize the soaring spire of Cathedral of Notre-Dame, often depicted in the paintings of one of my favorite Impressionists, Claude Monet. Its cobblestone streets are lined with wonderful medieval half-timbered houses; pedestrian walkways are the norm. There are at least a dozen churches in close proximity – all have steeples, bell towers and elaborate façades. Score points for Rouen’s skyline.

Rouen was founded by the Gauls before the 5th century; Charlemagne visited in 769; the Viking leader Rollo died here in 932; then came Romans and even Diocletian hung out on the Siene’s banks. William the Conqueror sipped wine; during the Hundred Years’ War, its citizens surrendered to Henry V of England and Rouen became the capital city of English power in occupied France. But, probably Rouen’s most famous citizen, ever, was Joan of Arc whose freedom was purchased by Henry V’s brother. This nineteen year-old Maid of Orléans was tried here during Christmas of 1430 and ultimately burned at the stake in 1431. All this and the French Renaissance hadn’t even begun yet. 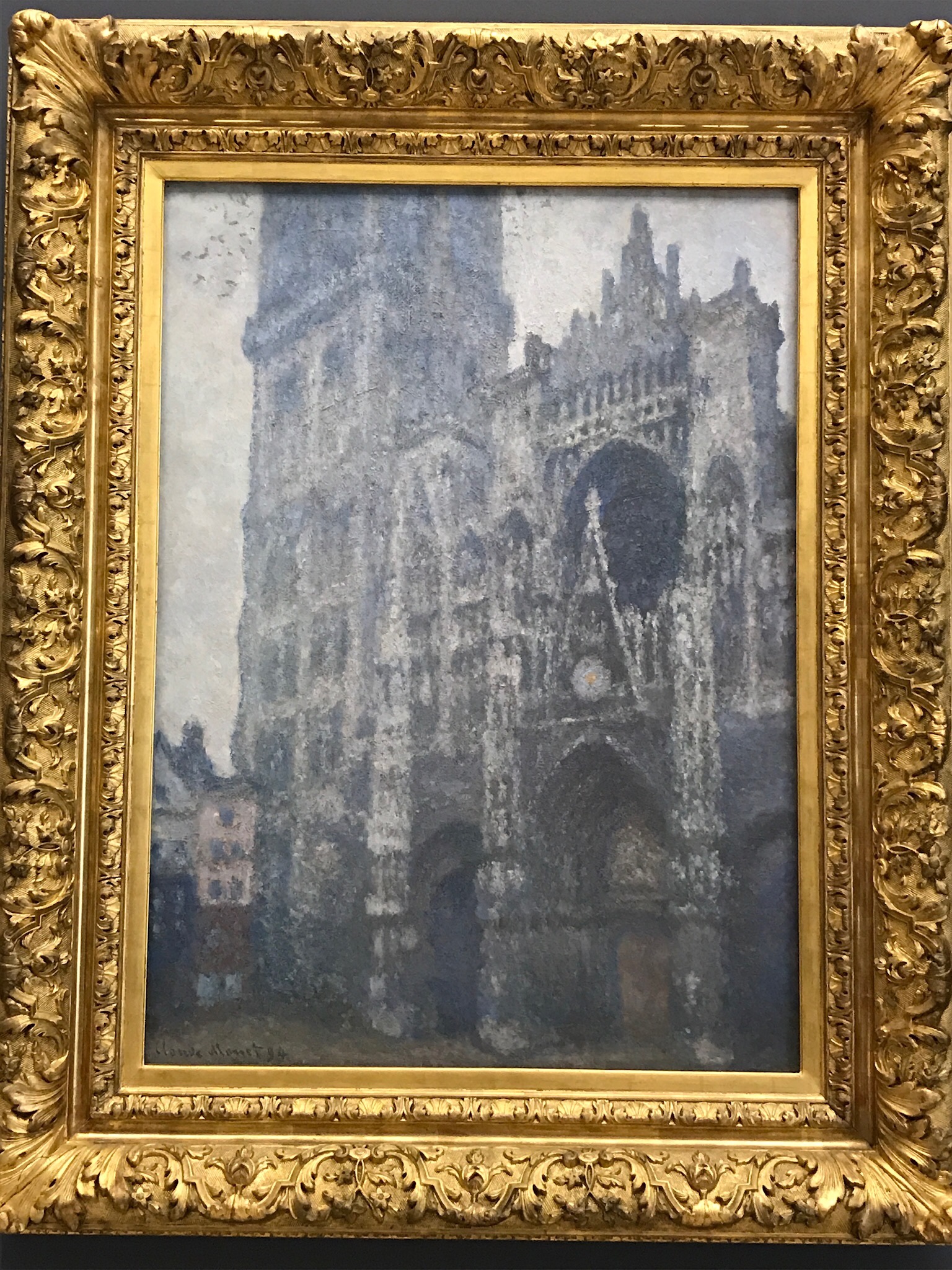 The soaring central spire of Cathedrale Notre-Dame de Rouen strikes a majestic pose some 528 feet above the skyline of Rouen and Claude Monet knew a memorable sight when he saw it. He painted this cathedral multiple times as he watched different plays of light and weather effect the scene. His paintings are scattered about the world from Rouen to the Getty Center in Los Angeles.

A Roman Catholic church has been in this location since the late 4th century. A later, greater version was consecrated in 1063 in the presence of William the Conqueror. Construction of the present Gothic building began in the 12th century. It was burnt, rebuilt, expanded, struck by lightning, damaged by a hurricane, lost its bells to making armament for French wars, survived bombings by British Royal and U.S. airplanes. This magnificent cathedral continues to dominate the skyline and inspire artists and visitors alike.

The interior is just as impressive as the exterior. The central nave is over 446’ topped with a soaring 92’ vaulted ceiling. Stained glass windows, choir and altars are magnificent. Inside is the tomb containing the heart of Richard the Lionheart, also the tomb of the Viking Rollo.

Throughout Rouen are sights commemorating its most famous personage – Jeanne d’Arc. The Church of Joan of Arc is relatively new, completed in 1979. Found in the center of the lively and colorful Vieux Marche (market square), it sits on the site where Joan was burned at the stake for heresy in 1431. A small garden, Le Bucher de Jeanne d’Arc, marks the exact spot. The modern church architecture is designed to depict the flames that consumed Joan and its surrounding market halls are supposed to be in the shape of overturned boats and fish with gaping mouths. The overall effect is pretty ugly. Joan, as an icon of the French, deserves better. The interior of the church does have several beautiful stained-glass windows but these actually came from the destroyed 16th century Church of Saint Vincent which was bombed in 1944.

Nearby Place du Vieux Marche is a vibrant place for dinner and a drink. And not far distant is the quay and the Siene, a favorite spot for late afternoon walks. 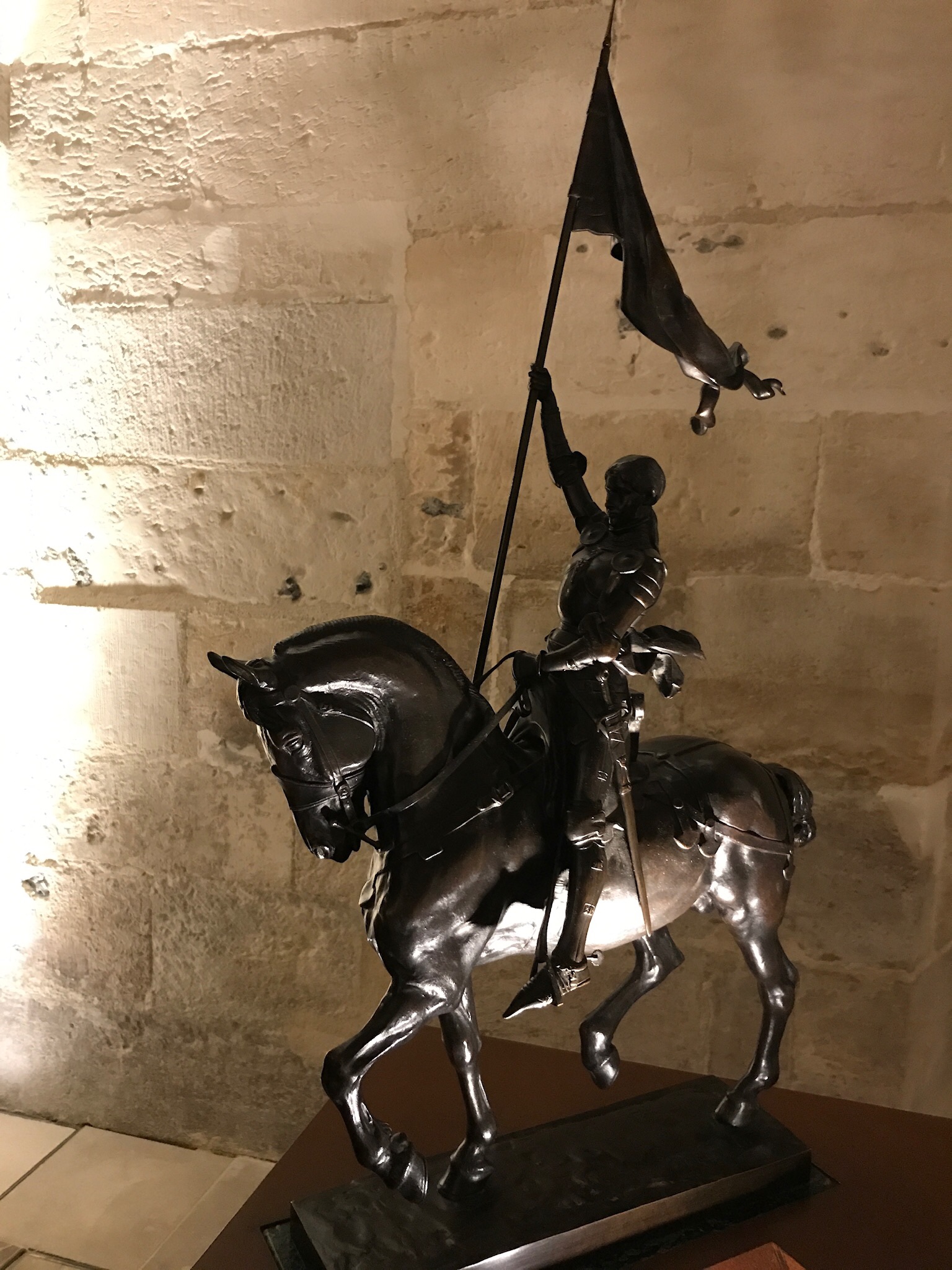 The Historical Museum Jeanne d’Arc is located near the Cathedral and contains several rooms of history dedicated to Joan of Arc. The museum, housed in a 15th century palace of the archdiocese, is modern and through clever video projections and period reenactments, tells the story of young Jeanne and her trial, and posthumous retrial, using displays and video technology. She was “rehabilitated” in 1456 after a posthumous retrial that cleared her name and led the way for future canonization. It’s not surprising the English wanted her dead and gone, but so did the French catholic hierarchy who betrayed Jeanne. A petition for sainthood was filed in 1869, but it wasn’t until 1920 that Pope Benedict XV made her a saint.

Gruesome fact, Joan died of smoke inhalation but this was not enough for the Cardinal of Winchester who is accused of ordering her to be burnt a second time. It appears one of the courts’ biggest complaints was that Jeanne wore men’s clothes to go to battle the English for God and country. And interestingly, once again, an historical museum ends with a lesson about the cruelties and destruction that comes with the ideology of Nationalism and a plea for tolerance. 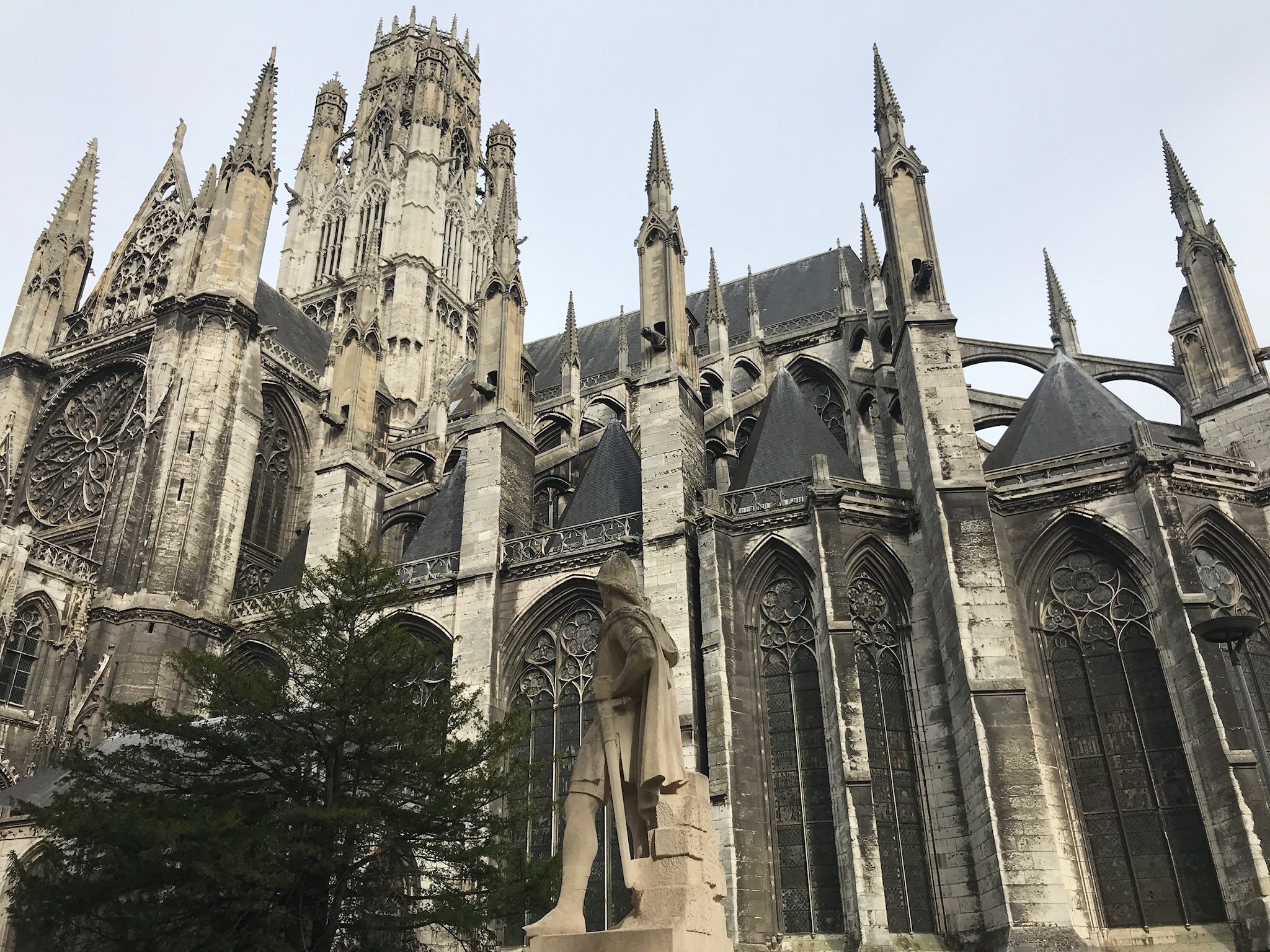 Other churches worth a visit are Saint Maclou and Saint Ouen Abbey Church. Saint Ouen is an architecturally magnificent church, unused, stripped naked, and pretty much neglected. Its gigantic organ remains and concerts are occasionally offered. The interior is being used as a gallery, also displaying children’s art. Saint Maclou is treated more kindly. Its wooden doors, flamboyant gothic façade, flying buttresses and spire face a lovely square. Built in mid-15th century, some of its more macabre decorations reference the Black Plague which took millions of lives during the previous century. Its interior is rather plain and simple although the lantern tower is quite nice. 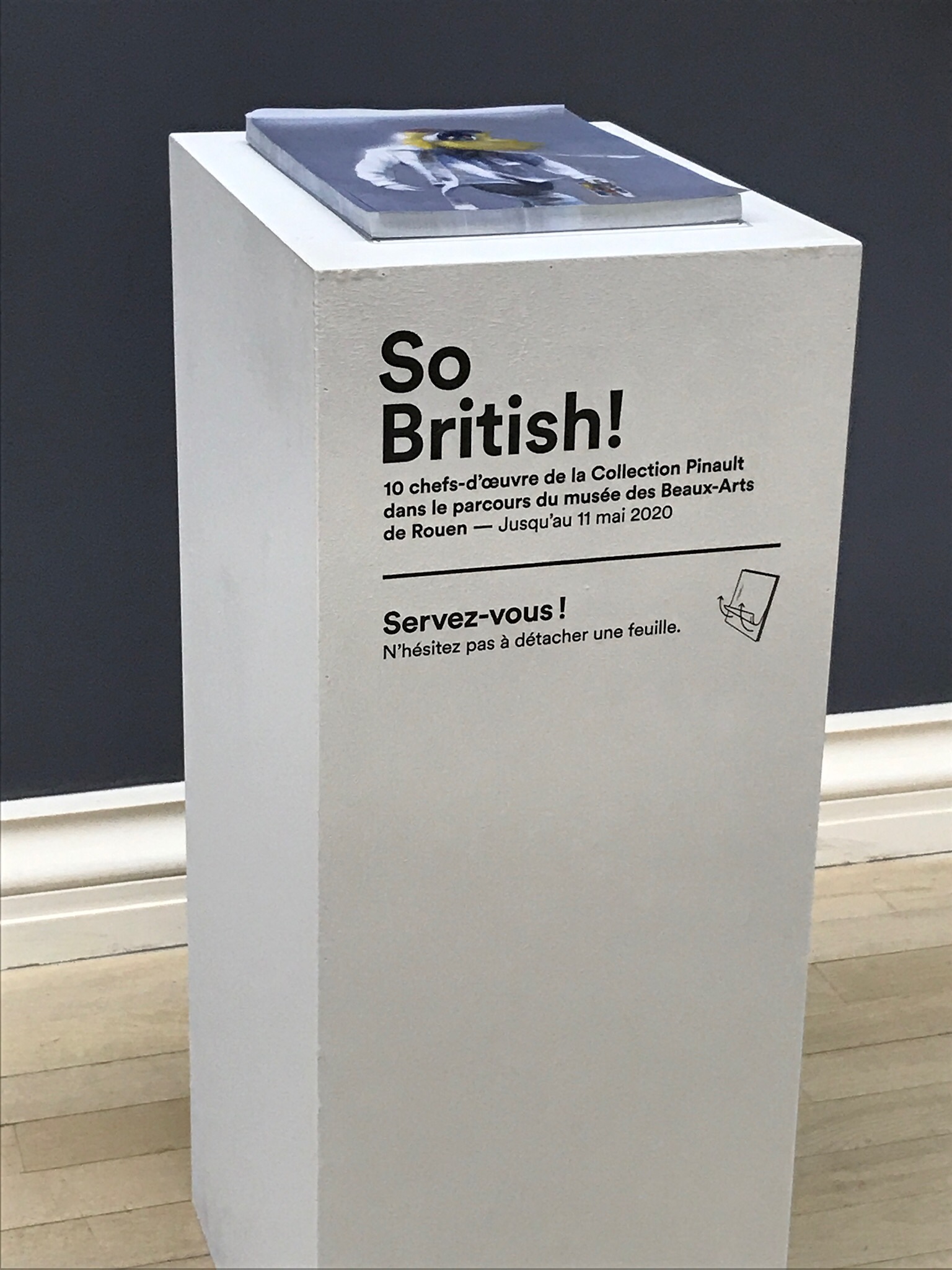 There are several fine museums in Rouen but I chose to concentrate on its Museum of Fine Arts (Beaux-Arts). The museum was founded by Napoleon in 1801 with its current building built around 1880 and recently renovated. Paintings, sculpture and drawings fill several rooms and the museum is home to France’s most complete Impressionist collection outside Paris. Delacroix, Moreau, Dufy, Pissarro Sisley, Velasquez, and Degas are represented. Paintings include several impressions of Rouen, including an oil by Monet of Rouen Cathedral. Much of the art represents religious scenes but the high ceilings are ideal for displaying the many gigantic paintings on display. The exhibit “So British” is excellent, representing several modern British painters and sculptors. There is a wonderful sculpture by Calder in the forecourt. It is a marvelous museum and free! 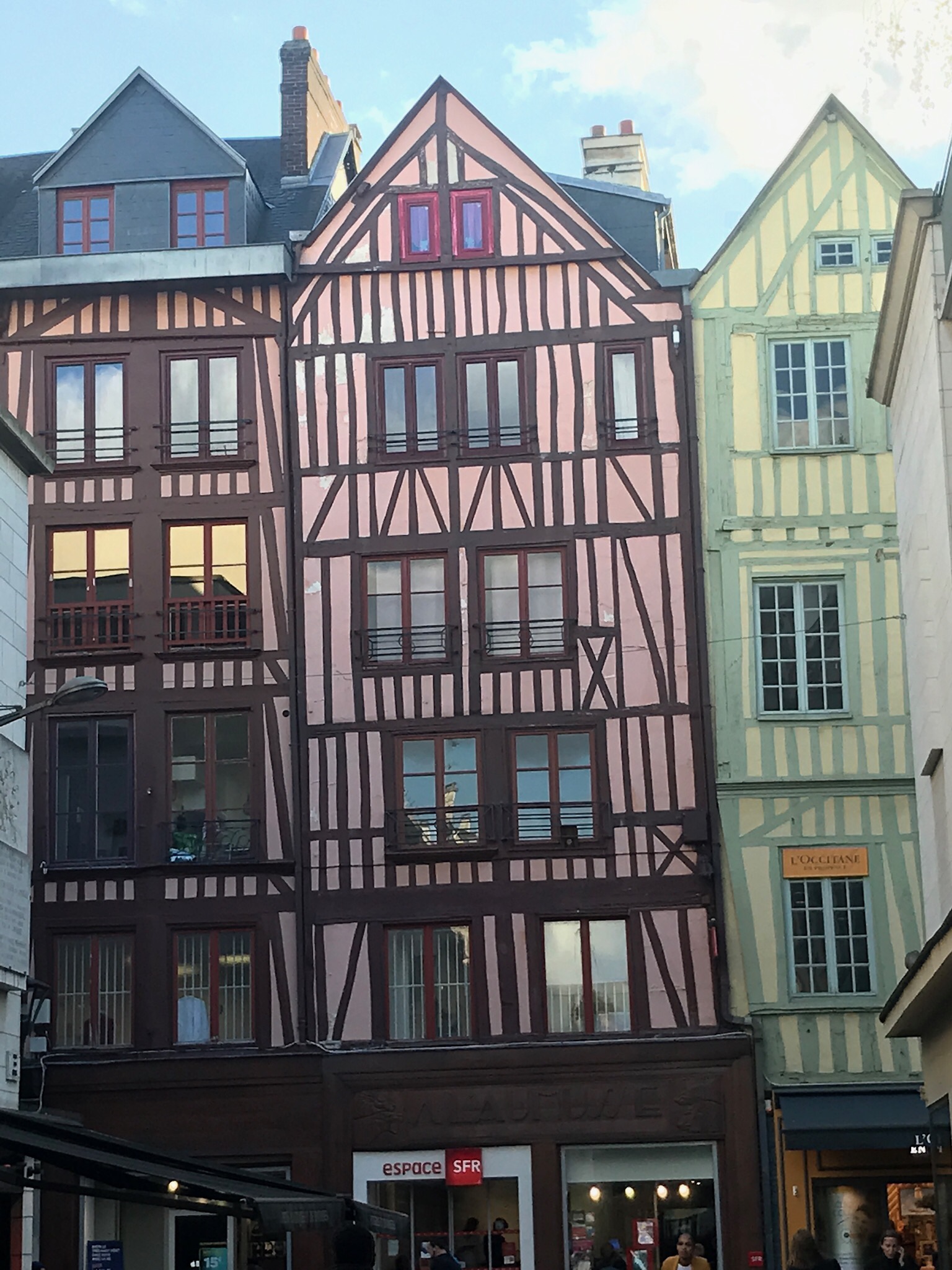 Architecture is a major reason to stroll the streets of Rouen. Lovely half-timbered houses line the cobblestoned streets. Parks and botanical gardens, Place du General de Gaulle, Rouen Castle’s remaining Donjon tower, the 14th century astronomical clock and Renaissance arch Le-Gros-Horloge, and the beautiful 16th century Parliament of Normandy, Palace of Justice and City Hall are reasons to just wander. Quite a few of the streets in city historic center are pedestrian only. This makes for very pleasant strolling

Shops proliferate, as do cafes. However, it is difficult to adapt to eating times here. While I can get a croissant and coffee every few feet, finding a hot plate of food in the afternoon, besides Subway and McDonalds where there really is a “royal with cheese,” is a challenge. I give up my search and enjoy a local draft. Then, I stroll the streets. When in France, do what the French seem to do so well

Walking Rouen has all the makings of meeting a fantastic, memorable city. It seems to have it all: history, architecture, parks, squares, cathedrals, and cafes. And brazen little sparrows who clean up your croissant crumbs while I enjoy a coffee. I am definitely putting Rouen on my list of favorite cities. There is much to see and do in this capital of Normandy. And to hear: the bells of Rouen’s churches peal throughout each day.