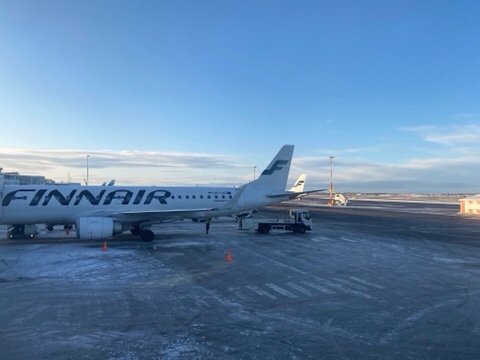 Lapland is associated with Father Christmas, a close relative of Santa Clause who I hear runs a sweatshop in North Pole, Alaska. His winter home after the busy season is in Santa Claus Beach just south of Santa Barbara, California.

Why do people travel to Lapland? It has to be more than a chance sighting of Father Christmas, a reindeer or because they have a cool coat of arms.

Like many, many tourist who head to Lapland in the winter, I am hoping Mother Nature smiles upon me and displays one of Her most magnificent creations – the Aurora Borealis.

People assume that those who live in very cold climates are somehow “immune” to the cold. They aren’t. The human body needs to be around 37°C no matter who you are. The difference between people who live in cold climates and everyone else is they know how to cope better with the cold. I refer to these people as climate deniers, like my nephew who lives near Duluth. These hardy folk have learned how to dress in subzero temperatures, though my nephew’s ability to wear a t-shirt when it is just a mild 32° outside leaves me questioning this above premise. Today, I am about to test my ability to dress for survival as I arrive in Finland.

Arriving into Helsinki at 5pm, it is dark and raining. Sunset is early at this latitude – at 3:22. I zip up my ski coat, wrap my wool scarf around my neck and pull my hat down around my ears. Exiting the airport terminal, I am immediately struck by how warm it is! Maybe there is something to that dry cold theory after all. However, within an hour, the rain has turned to snow, the ground is covered, cars will need dusting off before moving, and temperatures have dropped. It is indeed cold!

After an evening of rest, I continue my flight north. Below, I see nothing but frozen lakes and snow covered tundra with low clouds hugging the earth. It looks as desolate as I can imagine. I recall the Finnish Meteorological Institute’s web site which tracks Finland’s weather. It uses an astounding 45 symbols to describe Finland’s weather, differentiating “scattered showers to partly cloudy” from “cloudy and periods of moderate rain” as opposed to “isolated light sleet showers.” Everything you need to know to dress for weather conditions on an hourly basis. An orange person-symbol denotes the temps feel warmer than noted; if the person is blue, then temperatures feel much colder. As I step off the plane onto the tarmac, surrounded by snow and ice, the person symbol is definitely shaded blue.

I have arrived north of the Arctic Circle into Ivalo, Lapland, where the reindeer are delicious, the vegetables are expensive, and sunset is occurring just after breakfast at 12:52 pm.

That explanation kind of reminds me of my old hometown of Bakersfield, California. Throughout the world, people would say to me “I drove through Bakersfield one summer; my car broke down and it was 106°”. And I would always reply, like the typical resident of the Central Valley, “Yes, but it’s a dry heat.” Take note, we lied: 106° is damn hot.

The weather in Lapland is actually quite simple. For most of its long winter season, it’s cold. Period. End of discussion. However, Lapland is also very dry. It is what is known as a dry cold, so -20°C here doesn’t feel as cold as -20°C in other regions.

Lapland is around 68° North. Thanks to the Gulf Stream, being at 68°N in this part of the world is more pleasant than other parts of the world at the same latitude (Duluth is at 46.786°). In fact, I am further north than almost the entire state of Alaska, where Nome is at 64.5°N and gets significantly colder than in Lapland. But I expect, “dry cold” or not, it will be cold. And no warning has been given that this dryness will also suck one’s bodily fluids from one’s body like Dracula at a dinner table. I expect hair standing on end and static electricity making my days a shocking experience.

The area of Finnish Lapland is over 38,751 square miles (about the size of the state of Virginia), 92% of which is dry land. It is bordered by Sweden, Norway, Russia and the Baltic Sea. Lake Inari, which I drive past, is its largest lake at 425 sq. miles. The highest point in Finnish Lapland is west on Halti reaching 4,344’. I could go into a whole bunch of stuff about geography but suffice it to say Lapland is isolated, north of the Arctic Circle, cold and beautiful.

The very first snowflakes fall atop its higher peaks in late August or early September. The first ground snow falls around late September. Lapland experienced over 6’ of the stuff one year. The winter is long, approximately seven months. The annual mean temperature around Utsjoki, my ultimate destination, is a couple of degrees below zero. At first glance, a temperature of -10 looks terrible until one realizes the degrees are measured in Celsius. Okay, so recalculating, it is actually a warmer 14 Fahrenheit. Yikes!

But there is more to Lapland than weather. From 1634-1809, this area was part of the Swedish realm. In 1918, Lapland was sought by the King of Finland. During WW 2, Finland’s government allowed the Nazis to station its army in Lapland as a part of Operation Barbarossa, the code name for the German invasion of the Soviet Union. After Finland made a separate peace with the Soviets, they expelled the Germans causing the Lapland War and almost the entire civilian population to be evacuated. Typical of Germany, they destroyed dwellings, roads, bridges and railroads as they withdrew to Norway. Rovaniemi, the capital of Lapland, was burned to the ground.

Today, Lapland is modern with good roads, large hydroelectric plants, but a declining economy and population. In 2011, Lapland had a population of 183,320 of whom 177,950 spoke Finnish, 1,526 spoke Sámi (a Uralic language spoken in the furthest reaches of northern Eurasia and spoken mostly by people of Hungary, Finland and Estonia), and 387 spoke Swedish. Lapland is the home of about 3.4% of Finland’s population, and is by far the least densely populated area in the country. Perhaps that explains its odd mix of residents. According to the 2017 population census, there are small numbers of residents from Afghanistan, Somalia, Syria, China and Myanmar. Talk about getting away from it all!

Where there once were mines, there is now tourism. Numbers of tourists travel from the UK, Germany, and France. More Chinese and Italians travel here than US citizens.

But, we have all one thing in common – the seeking of the Northern Lights! We are all, hopefully, prepared to dress for the cold and to stand around for hours hoping for a glimpse of wavy colored curtains of lights in the skies.