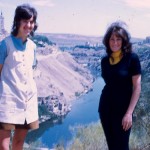 What impresses me immediately this morning is the easy, clean, fast and beautiful rail service and train stations we use to travel south to Toledo. The one drawback is the first train is sold out so we wait an hour. Should have bought tickets yesterday.

However, the hour is not wasted. Madrid’s rail station has a wonderful tropical, garden with a plethora of turtles to keep one occupied, plus comfortable lounge chairs. Heavy security checks bags and person before we are allowed into the boarding area so extra time is needed to meet the train, which does leave on time. The high speed takes 33 minutes to speed through 74km of Don Quixote’s windmill country and costs 20.60€ round trip. 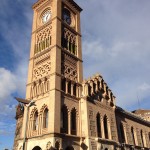 The Toledo train station is a gorgeous example of Neo-Mudéjar architecture, a type of Moorish Revival that appeared in the late 19th century in Madrid then spreading to other regions of the country. Architects characterize Mudéjar as an exclusive Spanish style with features like horseshoe arches, arabesque tiling, and abstract brick ornamentations for the façades. The result is unique.

The present station opened in 1919, presenting a central section flanked by two side naves, one of which is adjacent to a marvelous clock tower which imitates the style of Toledo church towers. The station has been declared a Property of Cultural Interest and classified as a monument and justly so. Its interior warrants some time to admire its woodwork ceilings and kiosks and colorful tile work.

From the station, Gabrielle and I walk toward town. Above us, Alcázar looms. It experienced numerous attacks and a siege or two, but I don’t believe it was ever defeated. Today, its attackers have it easier with the addition of several escalators to the top where a fine introduction to the site and history of its kings is presented in the Museo Santa Cruz.

Entrance is via the Museo del Ejercito (Army Museum). The Alcázar is a massive stone fortification atop the highest rock in Toledo and has hints of Visigoth occupation, was used as a Roman palace in the 3rd century, restored under Charles I (Holy Roman Emperor Charles V) and his son Philip II. In 1521, Hernán Cortés was received by Charles I at the Alcázar, following Cortes’ conquest of the Aztecs.

Monarchs rebuilt the site during the 12th century and it became the first example of a square fortress with towers on each corner. It was once again rebuilt under Emperor Charles V, this time creating the façades in a Renaissance style with towers and crenellated defenses.

Perhaps it is best known for its defense by Nationalist forces during the Spanish Civil War. Colonel Moscardó Ituarte held the building against overwhelming Republican forces in the 1936 siege. The incident became a central piece of Spanish Nationalist lore, allegedly involving the Colonel and the sacrifice of his son to Republican forces rather than surrendering the fortress. The siege ended with the arrival of the Franco’s Army of Africa. These events of the Spanish Civil War at the Alcázar made the structure a symbol for Spanish Nationalism.

By the end of the siege, the building had been severely damaged but most is restored and its displays and explanations are of interest, especially for the historian and military aficionado. The subterranean areas of original foundations and cisterns are as impressive as the upper floors. Cisterns remind me that one reason the men at the Alcázar could hold out was they had a good source of water. Also, it’s walls could withstand massive cannon bombardment. The upper floors are a bit of a disappointment as little is there but a Grand Staircase, chapel with a stained glass window of the double-headed Hapsburg eagle and a tent, and the ability to circle the fortress for views.

It is a short walk downhill to the Plaza de Zocodover and several choices for lunch. The plaza is busy and the site for all the bus activity. Perhaps a better choice is to wander the streets of Toledo. They are pedestrian, narrow, vintage paths past many historical places of interest. Not to be missed under any circumstance is the Primada Catedral, Toledo’s main cathedral.

This cathedral is one big “Wow” when entered. The entrance includes an audio tour which helps set the tone. The cathedral itself is huge and ornate with soaring ceilings and impressive sculptures and frescos and paintings. This 13th-century High Gothic masterpiece is considered to be the “magnum opus” of the Gothic style in Spain. It was begun in 1226 and the last Gothic contributions were made in the 15th century when, in 1493, the vaults of the central nave were finished during the time of the Catholic Monarchs Fernando and Isabel.

Like many cathedrals in Spain, this white limestone vision was built over a previous site of a mosque. It measures 390 feet in length by 194 ft in width and 146 ft high. It consists of five naves with transept and double ambulatory. It also combines some characteristics of the Mudéjar style. But it is the remarkable use of height and light, it’s soaring columns and arches, that produce the “WOW!” effect.

Toledo Cathedral not only was the hangout for the Catholic Monarchs, but their favorite Cardinal Cisneros. The three, together, fought to restore Christianity to all Spain, defeating the Moors at Granada, expelling the Jews, and supporting the Inquisition for all those undecideds. Evidence of this can be seen along the walls of Monastery of San Juan de los Reyes. This monastery was founded by the powerful couple of King Fernando II of Aragon and Queen Isabel I of Castile. Along it granite exterior facade, as per the Queen’s order of 1494, are numerous manacles and shackles worn by Christian prisoners from Granada held by the Moors and released during the Reconquista.

If time permits, there is also the Church of Santo Tome, the Museo del Greco, a nearby Synagogue and its Sefardi Museo. The Sinagoga Santa Maria la Blanca is simple and probably not worth the time as nothing of the synagogue is left but some plaster work.

Strolling the pleasant streets, Gabrielle and I pass numerous sites for sampling Mazapán. Along Santo Tome 3 we find a shop for Mazapán that has been made by Toledo’s nuns since the mid 1800s. Truly a blessing of sweetness. So is travel with Gabrielle.