The excitement of spotting
Mount Ararat 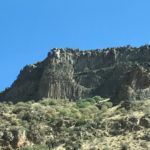 Traveling south along the shoreline of Lake Sevan, we have had it too easy and begin to climb into the mountains traversing switchbacks up to the 7,900’ Vardenyats Mountain Pass. The views just gets better and better as our little caravan winds along the Silk Road Wine Trail. Mountains, unique rock formations, deep gorges, green plateaus with large herds of sheep, and shepherds’ huts dot the landscape.

And then, just around our next turn, atop Vorotan Pass, there to the West, looms Mount Ararat, snow covered and proud, poking above the near mountain peaks. And there, just for a minute, is Lesser Ararat, 4,000’ shorter than big brother but equally exciting to see. 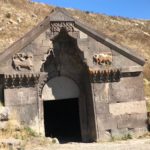 Atop Vardenyats Pass is the ancient site of Orbelian Caravanserai, built in 1332 by Prince Orbelian to accommodate travelers and their animals. Orbekian’s roadside inn is the best preserved such inn in Armenia. Ruins of a small chapel and a roadside spring also remain.

The entire structure and its gabled roof is of large basalt stone blocks and the only entrance is a rectangular vestibule adjacent to a long main hall. The vestibule and façade are ornamented with carvings and bas-reliefs with a distinctive Persian style. On the left is a winged animal with what looks like a snake at its tail, and on the right a charging bull. Two inscriptions in the vestibule are in Persian (defaced) and in Armenian. The Armenian inscription describes the structure and its use in detail. 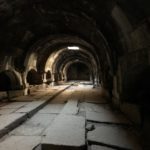 The single long hall is dark, lit mainly by unique oculi or circular holes cut into the roof. Its vaulted barrel roof design could have acted as a precursor to any subway tunnel in the world. Animals were housed in the narrow side aisles while travelers slept in separate areas at the end of the aisles. The well-placed oculi also helped with the smell and smoke inevitably created by its occupants.

The views are spectacular but I am sure after traveling along this challenging Silk Road Wine Trail for many miles, weary caravans were more interested is the safety of shelter, a warm bowl of soup and the warmth of a fire. Conversely, resting at Harshaqua’s “Water World” is a bit more comfortable for today’s travelers? 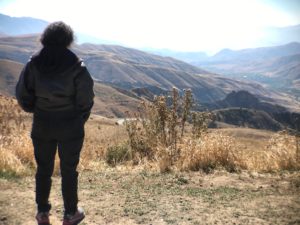 We continue our drive from the coldest to the hottest ecological region of Armenia. Spectacular cliffs, gullys, and mountain peaks reflect a volcanic past. Most of the high plains are barren and dry and I can see why someone might want to transfer some of Lake Sevan’s water to this region. In the mountains, I am told wild mountain goats roam. We exchange sharp volcanic peaks for rolling meadows as we descend into an area of water reserve at the opposite end of Lake Sevan’s 30-mile water tunnel. The stone homes and barns are sturdy as are the farmers, bee keepers, and herders who populate the rolling meadows of the highlands.

For much of the time, we follow the main road toward Iran. It is rough and slow moving. Distances are not great but the going is very slow. In exchange for natural gas, a vast network of electrical towers march along our route taking power to Iran. We pass many Iranian buses and trucks, and I am told Iranians view Armenia as their “vacation paradise” as here they can drink, dress, and disco as they want. 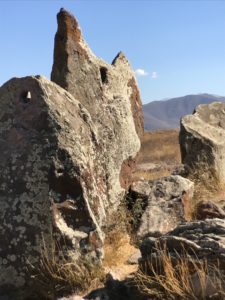 Continuing south up and over a few more mountain passes, we reach the fascinating location of Karahunj Observatory (Carahunge). Here lies an archaeological site of the megalithic stones of Zorats Karer, also known as the “Armenian Stonehenge.”

Atop a 6,000 foot mountain plateau and covering 17 acres, these prehistoric stones are dated to be 3500 years older than Stonehenge. In fact, some scientists believe there may be a connection between this ancient observatory and the more famous Stonehenge. Much is yet to be discovered and understood.

Carahunge means “speaking stones” so called because the numerous stones make whistling sounds on a windy day, presumably because of multiple holes bored at different angles through the stones. Research involving the site is fairly new, beginning in 1984. Since then, the site has been described as a necropolis dating between the Middle Bronze Age and the Iron Age. Enormous stone tombs and possible city walls have been uncovered. 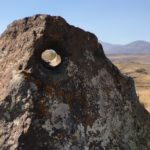 It is thought that the site is over 7500 years old but researchers still are not sure. But there is a purpose to this site as huge bezeled stones were moved from the river gorge below up to the mountain plateau. There continues to be lots of conjecture as to who, when and why.

Carahunge consists of a central circle with north and south branches of upright stones, underground burial ossuaries, and many separate standing stones called menhirs (man-made upright monolith stones). There is a total of 223 of these stones in heights ranging from 1.6’ to 10’ and weighting up to 10 tons. Made of volcanic basalt, which turns from a gray or black to reds because of weathering and mineral content, the menhirs are further covered with colorful moss and lichen.

About 80 of the stones feature a circular hole, although only 37 of them remain standing. Russian and Armenian researchers have suggested these standing stones could have been used for astronomical observation, some of which seem to be associated with sunrise or sunset at the solstices and equinoxes. Fourteen are  associated with lunar events.

Our last stop of the day is another monastery. Tatev Monastery is, of course, up a steep switchback road. Sitting at the edge of a deep gorge, the monastery enjoys remarkable views of the mountains, gorge and Vorotan River below. The views and colors are made all the more dramatic by a setting sun.

Rather than the incredibly schizophrenic road, we ride the aerial tram  “Wings of Tatev,”  whose “wings” fly 30 people at a time over 1000 feet up across Vorotan Gorge at 20 mph. The tram posts that it only took 10 months to build what is the longest reversible cable car ride in the world, but it is the photo of the elephant which gives confidence with its assurance that the single cable can hold the weight of 10 elephants. In less than 12 minutes, we are transported some 3.5 miles over the Vorotan Gorge to the monastery.

The original Tatev Monastery complex dates from the 9th century. In the 11th century, Tatev housed around 1,000 monks (now in Armenia referred to as priests) and a large number of artisans. In the 14th and15th centuries it hosted one of the most important Armenian medieval universities, which contributed to the education of science, religion and philosophy, the reproduction of books and development of miniature painting. 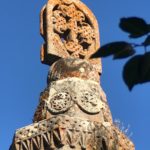 The fortified monastery consists of three churches, Saints Paul and Peter (895), St. Mary’s (1087), and St. Gregory the Illuminator (1295). There is also a library, dining hall, belfry, and mausoleum. The bell tower was destroyed in 1931 by an earthquake; the churches were restored but not the bell tower. Withstanding earthquakes and time is the Gavazan (staff), an upright pillar in a central courtyard built in the 10th century

Saints Paul and Peter is the oldest remaining construction within the complex and is a rectangular basilica. The apse on the east side contains the altar, and the central dome is supported by pillars. The roof is a two tiered drum and dome style covered with large tiles. The inside and outside walls are covered with hewn stones with ornamentation. The walls and dome have narrow windows to illuminate the nave. Niches contain well-preserved bas-reliefs. Few of the original frescoes survive, but of the many churches I have recently entered, it was one of the most pleasant. Quiet, simple music played in the background, candles burning before the icons, its simplicity a pleasant experience.

Originally constructed in 836, St. Gregory was completely destroyed in 1138 but reconstructed in 1295. Its simple construction lacks a central dome. The church itself is quite small. 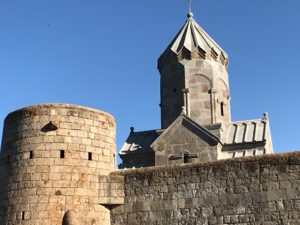 St. Mary’s is located along the northern fortifications of the complex. It was built in 1087 as a second storey to the covered mausoleum. Also damaged during the earthquake of 1931, it was restored in the late 20th century.

The early monks experienced a torturous climb up the mountain to reach the monastery. Within its walls, there are also small niches where monks would retreat in order to repent perceived sins. But the rest of the time, they must have been able to appreciate the spectacular views from their mountaintop. 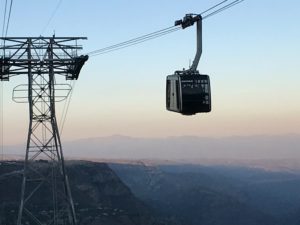 Wings of Tatev at sunset

We end our 200-mile day by retracing our switchback route to Goris. The large town lies at the bottom of a gorge and as we descend, long streams of smoke fill the air and valley. It is fall, the time to burn fields and garden refuse. The simple village, unremarkable architecture and smoke-filled air are not postcard material. Our overnight stay is at the Mirhav Hotel, a multi story modern lodge utilizing the ubiquitous rock of the area for construction. It offers wonderful gardens and terraces for sipping evening drinks while enjoying the babble of a stream below. Unfortunately, it has been a long day, the smoke is thick, and dinner and sleep beckons.