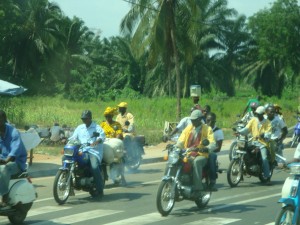 Benin is the size of Louisiana with a population of about 9 million, mostly living on its small southern coastline on the Bight of Benin. It is a tropical, sub-Saharan nation, highly dependent on agriculture. The official language is French. Roman Catholicism flourishes alongside a strong faith in the power of Voodoo. END_OF_DOCUMENT_TOKEN_TO_BE_REPLACED