Summer Solstice and the southernmost point of our trip at 63˚23’ S & 57˚00’ W. It’s a day of thick fog as we crawl through seas amid icebergs to our first landing at Brown Bluff on the Antarctic Continent. Like ghost ships, bergs and bits are obscured by fog. Our second landing is at Argentina’s Esperanza Station, its buildings bright orange against a backdrop of ragged mountains and glaciers, and year-round home to several families. Today it is 470, sunny and clear. However, strong guide wires anchoring the buildings against high winds, the deep snow on the ground, and the presence of penguins remind me this is a harsh and isolated life for its inhabitants. 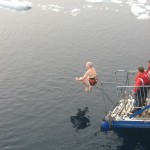 Before we depart from Hope Bay, some 26 souls experience a true Polar Plunge into 32-degree ice infested waters. No one chooses to linger for a swim. “Tonight”, a relative term here, we are rewarded with a spectacular sunset.

The ship sails across the Bransfield Strait to the South Shetlands and Fort Point in Yankee Harbor, Greenwich Island. It is 34 degrees today and Gentoo penguins and seals love it. In the afternoon we enter Whaler’s Bay at Deception island, pushing through slush and pack ice and realizing the Explorer sunk just a month ago about 10 miles from where we now sail. In Feb 2007 the Nordkapp struck rock and was holed and grounded in this area, limping into Whaler’s Cove for shelter until sister ship Nordnorge came to the rescue. I see my first Leopard Seal who is totally unconcerned about us but his blank oily gaze gives me the creeps – he is a feared predator who enjoys playing with his catch. He lazes about the ice floe like some gigantic slug. 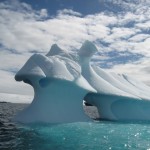 Ice bergs off Half Moon Island

The water is a beautiful aqua-teal from all the sediment. The seas are so clear I can see 20-30’ to the bottom. Icebergs are aqua-blue both above and below water and caused by old ice as it compacts. Bergs have wonderful fantasy shapes ships of the Spanish Armada to mountain peaks, animals, hollow caves from tidal action to great ski slopes that could attract the adventurous if the slope did not end in a 40’ drop into the freezing waters of the Antarctic. (Truthfully many adventurers would attempt such a jump if the authorities did not zealously protect this continent.) Immense pristine snowfields lay 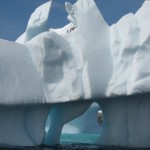 everywhere as we sail along the peninsula and mainland. Snow and glaciers fall from 10,000’ mountains to the sea, its weight so great it depresses mountains and the continent.

Penguins have great personalities, I want to limit photos but they are so cute. Most are curious. They have very limited exposure to humans and no land predators. Eggs, chicks, wookies – just one more photo. Some approach for a handout. Perseverance is a penguin’s middle name as they walk miles each day, often climbing 400’ to nest atop rocks using claws ideal for rock climbing. Monogamous, Gentoo and Adélie impress their mates by stealing rocks from other nests. Penguins troop down to the sea to wash and swim. Just in case a leopard seal awaits it is “You first!” They bolt from the water like torpedoes to land on an iceberg or the beach and slide on bellies both up and down hills of snow. Penguins express pleasure and displeasure by constant chirping (the young), honking and trumpeting. 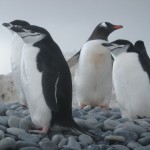 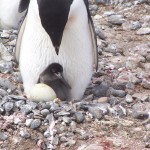 Some rookeries are all Gentoo or Chinstrap but then there might be a lone King or Macaroni or a few Adélie mixed among Chinstraps, a lone Macaroni in a colony of Gentoo. Elephant Seals sleep next to them all. They get along. We could learn from this. It is a constant ruckus as penguins steal a pebble or pass too close to their neighbor. As we traveled further south, the nesting season is later. Where there are large chicks in Falklands and South Georgia, the continent’s penguins are just building their nest and sitting on eggs or very young chicks. 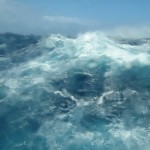 Christmas Day in the Drake Passage. We are confined to our cabin as hurricane force winds of 75-80 mph with gusts to 100 cause 35-40’ seas that violently roll and pitch us. We roll 30-35 degrees windward, rolling 15-20 degrees back to leeward. This is stability? Staff brings us sandwiches and juice for breakfast and again at lunch. Seas are beautiful but violent; oftentimes a splash reaches our 3rd floor windows. Fierce sprays blow from the white caps creating rainbows. We crawl through the passage some 85 miles from the Cape of Good Hope at 7-8 knots. This is not fun as it is too dangerous to do much beyond lay in my bunk and try to read, sleep, watch the seas master its environment. Surprisingly, the ship splitting along its seams or sinking does not cross my mind. I don’t even bother to check the whereabouts of my life vest. Shackleton crossed these seas in a 23-foot open boat!

I have traveled in Shackleton’s footsteps. Over the mountains of South Georgia; along the beaches of Fortuna Bay, Stromness and Elephant Island; upon the seas and amid the ice of the Scotia Sea, and for good measure through the Drake Passage. A toast to Shackleton and his men who honorably did all this and survived to conquer South. 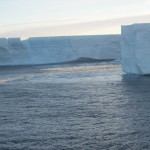