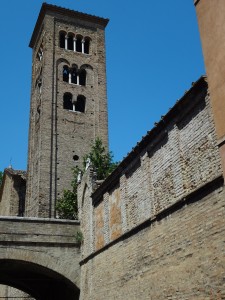 10/11 May  –  Flying has changed since my first long distance trip in 1972. Priority Access meant no waiting. Does anyone here not know how to connect a seat belt?  Wifi on board, a good movie and generous cans of Pepsi and tomato juice – and that was the domestic flight. Alas no peanuts. All running on time so a movie, a book, three podcasts, and a meal and I arrive in Milano. A train south takes me to Modena.

I’m in heaven sitting in a piazza in Modena, home of Pavarotti, drinking a beer, listening to the Duomo’s five o’clock bells. The accordion and trumpet players add ambiance.

Drug my tired body through the farmer’s market, Duomo and museums. Duomo is 1100s Romanesque church making it a young church in Modena. Many historic buildings in renovation or closed. Cobbled streets pleasant and quiet. Old geezers sitting on park benches watching the world go by and discussing all things important. Shops opening again after 5. Hotter than I expected, high 70s. I need sleep to make up for it being 9 am back where I started 29 hours ago. Tonight’s gelato is limone. Tomorrow I take a train to the coastal town of Ravenna on Italy’s eastern Adriatic coast.

My iPad’s blue bubble locates me wherever I am. How can I get lost?

Byzantine mosaics at their best - Basilica of San Vitale 546 AD

Sitting on my balcony, listening to Pavarotti, enjoying fresh prosciutto, black olives, mozzarella di bufala and local wine. All while downloading a book from my local library. Church bells are ringing and this fabulous Byzantine city has many of them. Fortified towers and church campanile dot every part of the sky. Love Ravenna and glad I had most of the day here. The Hotel Minerva is perfect. My balcony overlooks the train station but in Italy that’s an action spot.

Ravenna, 46 miles east of Bologna, is one of the most unusual towns in Emilia-Romagna. It is a mix of small town and capitalist hordes with memories of a great past around every turn. As the capital of the Western Roman Empire (from A.D. 402), the Visigoth Empire (from A.D. 473), and the Byzantine Empire under Emperor Justinian and Empress Theodora (A.D. 540-752), Ravenna became one of the greatest cities on the Mediterranean. 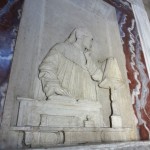 Ravenna achieved its cultural peak as part of the Byzantine Empire and is known for well-preserved mosaics created during that time — the most splendid outside Istanbul. The low Byzantine domes of its churches still evoke its Eastern past. The towers and churches, most dating from at least fourteen hundred years ago, fill my day with gratitude. It is a beautiful city with more red bricks per square foot than Bricks R Us can imagine.  I strolled the city for 6 hours, stopping in on every church, ogling frescoes and mosaics, listening to Gregorian chants piped in thru modern speakers, examining remnants of Justinian and Theodora, and enjoying the coolness of the interiors. The National Museum had an excellent display of pottery shards, bronzes, mosaics, and Byzantine coins. I can appreciate just so many shards, but I do get a sense of the history. Ravenna was not born yesterday. A highlight was visiting Dante’s tomb. I paid my respects but had to admit to the master that even though I read his entire Devine Comedy, I understood but a small portion of its greatness.

Gusting winds woke me at 3:30 am, no rain but temps have dropped. By morning wind had decreased but raining. 10 o’clock mass and the cities’ bells are fiercely attempting to out-clang each other. 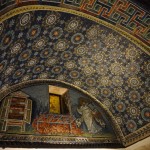 Mosaics of Mausoleum of Galla Placidia

Cooler temps are welcome as I stroll Ravenna logging umbrella time. Retreated to Restaurante Ca’ De Ven for wonderful lunch. Its frescoed vaulted ceilings, earthquake optimistic floor to ceiling wine shelves, and deep cave-like atmosphere was perfect respite from the rain. The radicchio salad topped with hot bacon and local Romagna’s piadina (flat bread) grilled and sandwiched around ricotta cheese was delicious! Good wine and primo piatto of tagliatelle al ragu. Read my iPad and listened to two ladies discuss life in an Italian which got more vibrant as wine was consumed.

I am doing fair with my Italian phrases, remembering more than expected. Problem is Italians reply in kind, then I am lost. If it sounds good and they have a kind face I just answer in the affirmative. Of course, it was less a mistake than fun when I asked my host for an ear with which to eat my cereal. What was needed was a “petite cocchirini,” a spoon.

Highlight of the day? The incredible explosion of thunder over Piazza del Popolo that set off all the car alarms. 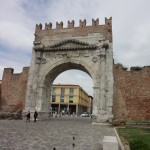 Arch of Augustus in Rimini (27 BC)

Ravenna was great; I love Rimini more. I used my iPod for a Rimini walking tour and spent the day exploring its easy to maneuver streets. But beware the bicycles – be alert or be run over. People very nice, I enjoyed using my Italian, had a gelato fragole, finished my book in Piazza Tre Martiri, got a battery for my Swatch, then returned to my wonderful Hotel Napoleon. My choices of hotel have been spot on.  Rather than a patio, tonight I have chickens. I am paying 50 Euros and rooms are quite flash. I could do without the 42″ flat screens but the mini bar and showers have been appreciated. Tonight I head to Riccione for a Buon Ricordo meal and my 14th plate. 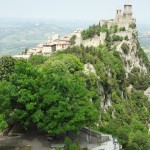 Explored the capital of San Marino, the world’s oldest republic and Europe’s third smallest country. The city of San Marino juts into the sky atop craggy Mt. Titano at about 2100′ above sea level, commanding spectacular views of the countryside, Adriatic coast and Rimini. Legend says San Marino was founded by a stonemason who climbed Mt. Titano to found a small community of Christians, persecuted by the Emperor Diocletian. I have always thought it tied to the Papacy but that is not the case. Throughout history, it’s pretty much been left to its own devices. Cesare Borgia took possession early in the 16th century, but he died soon after. In 1739 Cardinal Alberoni took over the republic, but the pope backed San Marino’s independence and the cardinal was sent packing. During WWII it remained neutral but hosted 100,000 refugees, though where they all slept in this tiny place one wonders. 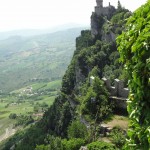 Today hordes of tourists and hyped-up school kids breech its gates and sweep thru its streets on day tours, most of whom I never had to share a museum room. The streets, though up and down, are enjoyable to wander and offer a couple towers to climb, a forested walk, and a good city museum with lots of those inevitable pottery shards dating back well into the BC era, churches, restaurants, and endless shops selling endless tourist kitsch. The big surprise was the many shops selling guns, rifles and knives!
Back in Rimini I visited the City Museum with neighboring excavations of a 3rd century surgeon’s house and even much earlier evidences of settlement. The intact mosaic floors of the Domus show the doctor had heat beneath the floors.

Enjoyed “The Prince” by Machiavelli as I trained south beside the Adriatic to Bari, a sea wall just feet away with waves charging up its sides; tomorrow evening I will be crossing it on my way to Croatia. It is windy and rainy again, one day sunny and the next 10 degrees cooler. Digging out my ginger root tonight!
Sea is crashing thrashing
Into the shore
Like life in the throes of living

First use of Trenitalia’s electronic ticket could not have been easier or cheaper. The two hour trip Milano-Modena cost 14€ while this trip with reserved seat cost 9€ and is three times longer with a faster train. My car partners are elderly Italians each with their own mobiles. I actually heard a man express “Mama mia.” Kind lady insisted sharing her biscuits.

“Alexander never did what he said, Cesare never said what he did.” Italian Proverb.

To a person who was boasting that he had read many things, Castruccio said: “He knows better than to boast of remembering many things.”

Wind returned early evening gusting to 20 mph, my stomach upset just thinking about the seas. Didn’t  Poseidon blow Odysseus off course along this route? Streets are littered with the death throes of pitiful umbrellas. Bari’s streets are narrow and buildings mostly of beige sandstone, but each window boasts a profusion of red geraniums.  Every few feet is an icon with an abundance of colored lights over alleyways and on walls celebrating the Festival of St. Nicholas, a really big deal here. My room at Abbrazia Degli Svevi reminds me of the Sassi di Matera caves of  limestone.

Only 18 mph winds this morning. I brave the elements to visit the Castillo and port. My appreciation of a location falls exponentially with how windy and wet it is, and how many dead umbrellas lay in the streets. Bari doesn’t have a prayer of entering the top 100 cities of Italy, or even the state of Puglia. In its favor are a number of churches where I find shelter. The Castillo filled 30 minutes amid rain and very loud rambunctious school children. Do mothers send them off in the morning all hopped up on sugar or what? Strolled the old city where the wind was curbed, visited every church and drug out the experience, visited the tombs, participated in the very serious celebration for St. Nicholas in his Basilica where his remains have rested since 1087. Alas no museums in this part of the city – I would even have considered one on modern art.

Killed more time going to the port and speaking with customs signora about a ticket. Reminded me of years ago in Brindisi where there is a port office but you can’t buy a ticket. They do offer a shuttle to the agency at the other end of the port. Does that make sense? So I stop in at mama’s bar for a plate of comfort spaghetti and a birre grande. No kitchen but she runs next door for take-out and I enjoy a couple quiet hours praying the wind abates. Spent another hour with Santa Claus.

Streets are empty between 1 and 4. I am still getting over the shock of Italian drivers stopping for pedestrians. Beware though as they are all on their mobile phones! The smoking has not abated but now they have to go outside to puff.

Buying a ferry ticket in Bari reminds me of all the horror stories about Italians and lack of organization. The fifth and final trip to the port finally netted me a ticket. I learn had I purchased online I would have had to go thru this to pick up the ticket, but in line met Chrystine from Vancouver and we teamed up on a nice little cabin, had dinner, and an enjoyable “cruise” on this huge ferry – rocking and feeling the wave action. We left 3 hours late in hopes for calmer seas – doesn’t feel like the captain found them.

They say here that if Paris had a sea they would have a little Bari. Credo di no! 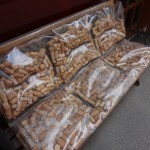 Good use of corks! 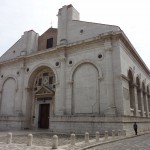 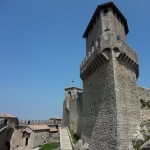 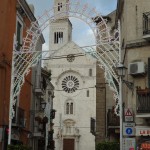