You can’t be a real country unless you have a beer and an airline – it helps if you have some kind of football team, or some nuclear weapons, but at the very least you need a beer.

GUANGZHOU CHINA, 6:30pm, 30 Sept: I am surrounded by violet passport holders all wanting to get to the head of the line. The rush to the gate is chaotic. The height of civility appears to have been left behind the immigration line in Taipei. The plane pulls from the gate and there are still those in the aisle putting bags away. They bounce up before the plane stops upon landing. I am on hold at the airport awaiting my flight to Kathmandu. There I will enter a new time zone and regain 2 hours and 15 minutes.

Taipei proven to be interesting and enjoyable. In summary: 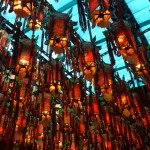 Taipei was surprisingly inexpensive. I exchanged $40 at the airport for the bus to my hotel, planning to find an ATM later. That original amount proved to go a long way. Metro tickets were under a dollar, beer cost about a dollar, entrance to museums was free or 67¢ (the exception was Palace Museum which should have been free but charged me 160 TWD). I could easily eat dinner for 60 Taiwan dollars – that’s $2! Add a couple local beers from 7-Eleven for another $2.50. I ate well for under $5. I exchanged another $20 for a rainy day backup. Most of that is still in my pocket.

Not only is the local beer good, but I liked the street food which was varied and plentiful. The soups are wonderful. It was the breakfast that took some getting used to. I could build a green salad; choose ingredients for a bowl of soup; have eggs, waffles or French toast; choose among traditional Chinese dishes; dine on sushi; eat  a variety of cereals, sausages, ham, mystery meats, steamed dumplings, breads and juices. Awesome what I saw on the breakfast plate. 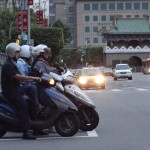 Broad avenues and thousands of motorbikes

Traffic management is impressive. Taipei’s 6- and 10-lane streets are filled with cars and hundreds of speeding motor bikes. Crosswalk lights are to be honored and vary from 30 to 90 seconds. I saw few jams, one accident, lots of patient pedestrians and few impatient drivers.

A Police Post is close-by wherever you are. I never felt I needed them but it was nice to see. Traffic police kept the swarms of motor bikes honest.

I was not the only blonde in Taipei. I saw two others.

This is a country conscious of disease and its spread. First sign in the airport was a warning about a MERS outbreak in Saudi Arabia. Travelers from there were asked to check with officials and I’m sure people did. There was a heat-sensitive camera on arriving passengers. Several people wore masks, not to prevent illness as much as out of respect so as not to spread their cold to others. There are a lot of ingenious masks that food servers wear.

I was told there were 7 million people in greater Taipei. I believe at least 6 million of them are in the metro tunnels. These tunnels are a rabbit warren of shops, services and restaurants. Passages run several floors and many directions. Someone said I could walk between at least 3 metro stops without exiting. I probably could live down there and never have need to surface. The signage is excellent and once I studied the maps, I found it easy, cheap and efficient to get anywhere in the city.

TVs are provided while you wait for the train, which is only a couple minutes. Crowds are polite, respectfully que up, and everything is clean. In fact, TVs run instructions on how to be polite and respectful: when to give your seat to someone; to text, not call; disposal of trash and so on. It seems to work.

The biggest presence in Taiwan, other than the hoards of eager mainland Chinese, is 7-Eleven. The convenience store has everything – a one-stop shop. I stopped in nightly for my evening beers.

People are friendly. Elderly gentlemen smile and welcome me to Taiwan. People were happy to assist or find someone who spoke English who could. And for being the only blonde for blocks, I never felt awkward.

The children are everywhere with a majority of them looking to be under 10. All are well-behaved, and if not it takes little from the parent to get that good behavior. And the child responds with the good behavior. Haven’t seen a one who pitches a fit to get what they want. While there are scores of children everywhere, there are few homeless.

Beware of violet passports. These are the mainland Chinese and they will trample their own mother to get to the head of the line. There exists no words for “que” or “patience.” Immigration at the airport was a dangerous place, surrounded by hoards of excited mainlanders heading home. If it were not for the tourist dollar they bring into the country, I think the KMT would suggest they stay home.

This is the shoppers’ paradise. High-end stores, service to the max, and a plethora of brand names. Everything is here. I did not look to see where items were made but I suppose their clothing tags look much like ours: Made in China. 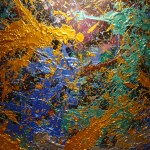 I liked the brilliant acrylic paintings of Wen Shu Sheng Jing on display at the Chiang Kai-shek Memorial Hall.

I loved the fact that I saw no more than 20 people smoking during my entire time in Taipei.

The Tropic of Cancer runs straight through the middle of Taiwan bringing with it tropical and subtropical weather. It rains over 160 days a year and one storm can dump 45″ with a yearly average of 95″. Occasional typhoons, regular brisk winds and thus lots of humidity create a lush and green country. In fact, it has a similar climate to Hawaii. The country is mountainous and offers countless hiking trails, picnic spots and outdoor activities.

Pretty nice but I am forced to give up on my hair.