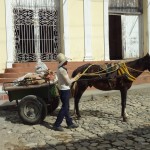 Rough and narrow roads filled with more horse carts than cars. Dense fields of maribou; grazing cows and horses, pigs and chickens running through yards; vegetable gardens; men cutting marabou for charcoal, machetes chopping away; mountain peaks to the north, and everywhere the banana tree. Temperatures cooler and humidity lower. Lush and green Cuba is a tropical paradise. Columbus thought the island “More beautiful than any I have ever seen.”

The city of Trinidad, an original Spanish settlement and UNESCO World Heritage Site, is a perfect Spanish colonial/Caribbean town. The architecture is attractive, even though it could benefit from a power wash and paint. The buildings with Corinthian columns are a surprise. Spanish wrought iron, elaborately carved doors, windows and eaves along cobbled streets are the norm. Trinidad is a beautiful and interesting, easy-to-walk city. The PtoP Connection here is with the owners of a Casa Particular (private B&B). With changes in the law since Raul took office, this owner is able to buy and sell property, invest in his home and rent out two rooms to tourists. (A blue sign indicates okay for tourists: a red sign rents to residents only.) They also are allowed to have a five-acre farm to grow vegetables. He played the guitar and sang as we snooped around the house, listened to the talkative cat, and sipped expresso. 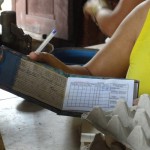 Even more interesting was my chance to enter a ration bodega and see how the Cuban’s ration booklet is used. A family is allowed a monthly ration of essentials like milk, bread, rice, beans, soap – priced in Cuban pesos. Additional items are bought from a farmer’s market or illegal market. A struggle but it is possible to have a healthy meal: buying vegetables from a farmer’s market, the ingredients for a good meatless soup can be had for under a dollar.

Ate lunch at a local restaurant. Large buffet of good food with two drinks included. This tradition is appreciated as I am able to sample their beer, wine and sometimes rum drinks as part of my meal. Also I finally had time to browse a crafts market where I found some colorful paintings of Trinidad. 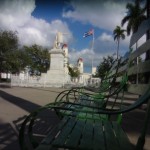 Drove to Cienfuegos, another UNESCO World Heritage Site, which is understandable because the architecture, city squares and culture are wonderful. Cienfuegos was founded by the French, who came to Cuba after the Haitian revolution in 1891. The city is home to a large artistic community and one of the most beautiful theaters in Cuba. We were able to enter the Thomas Terry Theatre, built in 1895, to enjoy the ornate ceilings, boxes, and stage.

All the buildings around José Martí Square are delightful. While the church is ignored, the facades of other buildings are stunning. We entered the Museo for a chamber choir performance. The acoustics excellent under a plain barrel-vaulted ceiling. As in all performances I have seen, talented people are committed to showcasing their art.

While on the bus, the discussion is lively and varied. Politics and the economy are typical subjects. Americans receive little news concerning Cuba and much of is the biased reporting of Miami Cubans. President Raul Castro has made changes since 2008 and people are optimistic. Raul has set a limit of two terms for president, a term being five years, so in 2018 Raul is to step down and there will be new leadership, maybe not a Castro for the first time since the revolution. No new constitution is in the future and people remain committed to retaining socialist character of government.

There are more freedoms yet still no freedom of speech. “Now we can discuss and present different opinions,” but there is still the official government line of the old guard that prevails. People complain about the quality of goods and lack of choice. In fact, a new law now prohibits importation of goods because it was found the government stores were not able to compete, so laws passed to end the competition. Cubans will likely find a way to get around this, too.

Currently, the government imports then resells goods for three times their cost. A television bought for 200$ is sold for 600$. Cars, all used, costing $4000 might be sold for $20000. Cubans save years for such luxury items. And all products are without guarantee. “If it’s broken, too bad.”

Wages continue to be problematic. Those lucky to work directly with tourist services can earn as much per day as the average Cuban makes in a month. A bartender tipped one CUC (1$) per person may earn 22 CUC a day, while the average Cuban earns that in one month. And tips are not reported. Professionals like teachers, doctors and accountants work second jobs. The average Cuban doesn’t have many opportunities and must survive on $25-30 a month. This is one reason the Cubans we meet have an eagerness to serve. These jobs are valuable and coveted.

The pricing differential is also interesting tho I think a fair source of income and support. A resident pays 5 pesos for theater tickets but tourists pay 5 CUCs. A portion supports the culture while making cultural events affordable for residents.

An entrepreneurial ingenuity seems to have been born since the Special Period. Russia subsidized 80% of Cuban export/import trade in the 80s. The Soviet departure in 1991 ended a stable economy, the source for loans, spare parts and machinery for industry. 60% of factories shut down. Times were desperate. Slowly people found alternative ways to earn money, buy food, and survive. This spirit is alive and well in today’s Cuba. Additionally, family remittances flowing into Cuba amount to almost a billion dollars a year (this doesn’t include all the TVs and consumer goods flowing into Cuba everyday via Miami International Airport). The U.S. Embargo may be inconvenient but is only a bump in the road for Cubans. The general agreement is that the embargo is stagnant and represents a generational conflict between the early exiles from Cuba and the 1950s old guard leadership of Cuba. Both sides need to die off before changes will come. And come they will.

A six-lane highway, the only highway built since the revolution, takes us directly to Santa Clara. Staying at the Hotel America across from a Coppelia where there is a line wrapping around the block, waiting to get an ice cream. It’s a Cuban thing. 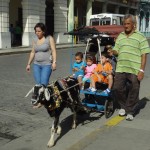 Goat carts on a Sunday afternoon

I explored Santa Clara’s main square, Parque Leoncio Vidal, with its colonial buildings, bullet holes in a hotel facade where Batista’s army made its last stand before trading their loyalties to Fidel, little goat carts filled with children, and Cubans congregating for a relaxed day with friends. Santa Clara, with over 300K people, is the third largest city in Cuba. Not impressive as far as architecture and less refurbishing of buildings, but here too miracles could occur with a little power washing.

At the Cultural Center an independent theater group for children 4-14 greeted us in costume and character. The children rehearse and perform Cuban folk plays and songs. For us, they presented a Cuban rendition of Romeo and Juliet. The children were charming and talented. We then crossed the square to see the opposite social group, one for Seniors. This healthy, happy group presented songs, dance and games. More importantly, they are confident their health care system can be relied upon to take care of their needs. Retirement is treating them well in Cuba.

We lunched at a prolific buffet. Knowing how the typical Cuban family struggles to feed and clothe their family, these lunches are an embarrassment of riches. Food is delicious, varied, and in large amounts. The usual pork, chicken and fish is often supplemented with beef, a meat not available to the normal family. 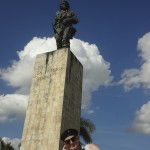 Che Guevera’s Memorial and Museum impresses with its giant plaza and towering statue of Che. The museum is good and the first place we have found English translations. We respectfully entered the Memorial where Che’s remains were buried in 1998 after their return from Bolivia. Around him are memorialized many of the key figures who fought alongside Che in the Congo, Bolivia, and Cuba. Che was a key figure in the Cuban revolution and his face is almost as prevalent as Fidel’s. The people seem to revere Che almost as much as José Martí.

To end this hot and humid day, we visited a city museum displaying a selection of pieces from around the world from Chinese vases to wicker furniture. Most items were privately owned but since 1959 nationalized by the state. Afterwards, we enjoyed a short concert by Santa Clara’s Troubadour. But enough culture for one day, I just want to People to People a cold beer!

Bought some Bucanero and Havana Club (formerly Bicardi) at local bodega then returned to hotel patio where we smoked a wonderfully mild and inexpensive Cuban cigar. Lines at the Coppelia are wrapped around the block – all for a table and some ice cream. Cubans save for these little pleasures and for the opportunity to socialize. They are a happy people. With my beer and cigar, so am I! Tomorrow, I go to La Habana!