Drove bumpy, two-lane, horse and bicycle filled roads to Camagüey. In the mining town of El Cobre is Our Lady of Charity Basilica where resides the patron saint of Cuba in the form of a 16″ statue of the Virgin Mary, visited by everyone from Hemingway to Fidel’s mother. Prayed for her son’s longevity?

Bayamo, Capital of Granma Province is a clean, prosperous town founded in 1513 and burned to the ground by its inhabitants rather than surrendered to the Spanish colonists. We boarded carriages drawn by overheated, struggling and somewhat thin ponies to be drawn around its streets. Many political signs of Fidel and Che. “Always the Revolution!” Taken to a carriage factory and shown how our current, and very popular, mode of transport is made. Once again, most of the tools are outdated, didn’t see many safety glasses, and methods  probably unchanged over the last two centuries. 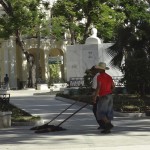 Horse carts to the pedestrian street leading into the main square. Many peso stores to browse, tho some locals warned us “only pesos!” In Revolution Square, where street cleaners mopped marble walks, we ate another excellent meal with music, and beer in the Royal Hotel. Spent a few minutes in Iglesia Parroquial with its magnificently carved baroque alter. Birthplace of Céspedes, who declared Cuban independence and freed his slaves in 1868, Bayamo is also where the Cuban National Anthem was written and sung for the first time.

Our afternoon was on the road between Las Tunas and Camagüey dodging horse and rider, ox carts, bicycles, pedestrians and the occasional car or truck (less than 15% own cars). Countryside is lush green. Once the world leader in sugar production,  cane fields are now a fraction of the land and sugar mills almost nonexistent. Sierra Maestra Mountains have been left behind; land is flatter, acres uncultivated and covered by the invasive marabú plant. There are many cattle, mostly Brahman from India.

Meanwhile, we were able to discuss the enigma that is Cuba and a Government represented by Fidel. Fidel, the idealist, would want everyone equal but his paternalistic insistence upon this has destroyed the economy of the country. It appears Raul, President since 2009, had other ideas while working in the shadow of his brother all these years. More the pragmatist, Raul has been visiting China thru the years and evidently was listening and watching. If China can create an open market economy under a one party system, why can’t Cuba? Well, evidently since 2004 he has slowly introduced new ideas and experimented with the economic system with the hopes of stimulating the economy and Cubans.

There appears to be opportunity for more travel, ownership of private property,  an end to dual currency, more bottom to top conversations with the government, and equal opportunity for everyone. Only 5% of people in communist party and don’t have to be communist for the job any longer. Free health care and compulsory education is a source of great pride. But economy continues a disaster.

When the Wall fell, Russia ended subsidizing Cuba and the country entered the ‘Special Period’ – a time of economic disaster and shortages which continue to exist today. Fidel’s solution for hard currency and credit was to pour funds and efforts into building the tourist industry. Also, in 1994, the Cuban expats began to send relatives money. Without these two sources of millions of dollars, Cuba would starve. The U.S. Embargo has slowed growth but only forces the typical Cuban to find other sources to circumvent the system. And this they do quite well. For the poorer villages, they continue to subsist on what meager food they can grow and barter.

Cubans are guaranteed the job opportunities, given food rations, free health care, free education, enjoy safe streets, receive pay whether they work or not, and given land to farm. Yet it seems the only way to get ahead is by ingenious ways to beat the system. For all the ideals of Fidel’s socialism, Cubans are far from experiencing economic equality. In this way Cuba is no different than its nemesis yanqui U.S.A.

An example of a nonsensical ideal of socialism is the cow (also coffee). The Government owns the cow. Huge fines and jail threaten any Cuban killing a cow for his own use. They can sell the milk but will go to prison for having a beef steak. The rancher feeds and maintains the steer but must sell it to the Government for pennies a pound. The rancher is allowed to sell a portion of the cattle, say 25%, for their private use. This is one reason you seldom see beef on the menu. However, the recipient of this beef are children seven and younger who are guaranteed a beef ration. The goal is to have nourished, educated children. Some beef will go the the tourist, but the major recipients are the children. Hard to argue with this goal. However, it also dampens incentive, expanding herds, and overall supply. To allow ranchers larger herds of cattle or more land would recreate landowners and this is not socialism. Everyone is to be equal.

Except, economically Cubans are far from it. Those with access to tourists are far better off economically than others. Those who receive tips in tourist’s Convertible Dollar can save, purchase goods and even some luxury items, like a TV or second pair of shoes. Those whose Cuban relative is one of the million or so living in Miami receive dollars to feed their families, invest in a small business like selling perfumes or driving a classic car for tourists, and are doing better economically than the other several million Cubans without these benefits.

Youth know nothing of the ‘Special Period’ and are like other youth in the world. They want movies, music, cell phones, Internet, levi’s and heaven forbid probably Facebook and McDonalds. Facing this jauganaut of wants, Fidel is fighting a loosing battle. President Raul is another story. He seems more realistic, and while attempting to stem the western cultural tide, since 2008 has tried to bring to the fore a free market society. By tweaking the system of laws and economy, Raul may be causing confusion and anxiety over what’s next, but at least he is attempting changes within the socialist system.

With an aged parliament, the old guard will soon be gone. It is then that Cuba will see another revolution of change.  As one Cuban said, “It’s not a political problem but economic problem. We want to live in this beautiful, safe country, with free education and health care. I just want more freedom to do what I want, to travel. We don’t know want a communist is.” 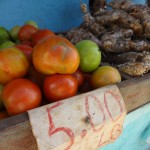 Tomatoes and yuca. 5 pesos is about 20 cents.

We interrupt our discussion as we arrive in Camagüey, one of the first seven villages founded by the Spaniards. Camagüey played a prominent role as an inland territory dedicated to cattle breeding and the sugar industry. It is the 3rd largest city in Cuba and the historic center is a UNESCO World Heritage Site. After mediocre breakfast, we passed workers’ square with portraits of Che, learned about productions of the local ballet troop (city is home to 3 of the best dance companies in Cuba), and sat   in on a rehearsal of Don Quixote. Shopping the farmer’s market allowed me to price the cost of vegetable soup for the family’s dinner: about $1 a day.

We visited the studio of Martha Jimenez, the creator of a public art program that has received UNESCO awards for cultural heritage. Martha is a world renowned sculptor and painter who created the Plaza Carmen Sculpture project. We ate delicious shredded pork and rice pudding next door for lunch. 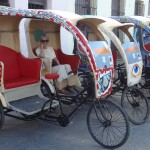 In the afternoon we rode colorful bicycle rickshaws stopping a few minutes at the pleasant city squares. The entire city is in the process of restoration and I can imagine that in five years the city will once again shine in all its colonial glory.

Returned to hotel to buy Bucaneros and Cuban cigars for my balcony. We overlook the pedestrian street with its dual church spires. Camagüey appears more sophisticated and progressive as it prepares for life A.F. (After Fidel).

Dinner was at a private paladar, Restaurante 1800 on Plaza San Juan De Dios. Served an awesome buffet and choice of entree (rabbit), drinks and wine with dinner, and deserts. Asked owner how he came to open restaurant. He was thankful for changes Raul has made as it enabled him to invest savings of 18 years, fix up and sell his father’s house and with capital, remodel his home into this great restaurant. Unbelievably, our meal would have cost only 15-20$, less if we were Cuban. After dinner I rode to hotel in ’53 Chevy, inherited from father and lovingly cared for, with added perk of CD players and stereos. 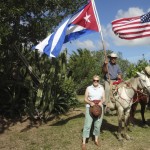 Camagüey is the center of livestock in Cuba so we visit King Ranch and meet Cuban cowboys. Our greeting consisted of his top cowboys greeting us with Cuban and American flags. King is a government ranch raising about 2000 Brahman  cattle for beef. And Fidel slept here. Vicente shared its history and pet roosters. A highlight was the rodeo of calf roping and steer wrestling.

We boarded horse drawn carriages and rode to the nearby rural village where the workers and families live. We met the local teacher and students in their one classroom school. Later we visited a simple home and met the family to hear about life in this very isolated and poor community. We had an excellent spit-roasted pig for lunch among the prize bulls, dogs and pushy roosters.

For the umpteenth People to People Connection in the evening we visited an artist studio. Artists enjoy a level of freedom to pursue their creativity and earn dollars. Problem is most of what I have seen I do not like: too abstract, contemporary or dark. Few colorful paintings reflective of what I have seen in Cuba. A 10-piece string quartet performed for us. Again, most were teachers and this a second job to earn a decent living.

Dinner was at a local state restaurant, just across the street from the private paladar of last night. Not only the street separate these two restaurants. The food tonight was meager, not as tasty and poorly presented. If last night’s dinner was 15-20$, then tonight should have been priced at 2-3$. If the difference is so dramatic, will this threaten the state run restaurants’ ability to compete for tourist dollar and in turn threaten the existence of private paladares? 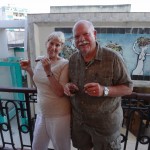 Cuban cigars and rum with Jim.

Wish I could stay in Camagüey longer. It is a great city with pleasant streets, shopping, restaurants, interesting squares, cultural arts, and more. The whole city seems to be remodeling in preparation for its 500th anniversary. A little more transportation, a little more English, more local crafts and a stable currency and it may not be long before it is a top destination in the world.