“Havana is Havana, the rest is grass,” probably said by a Habanero.

I prefer “If you don’t get out of Havana, you haven’t seen Cuba.”

Everyone is ready for Havana. We speed along the Autopista, a bumpy, wide, but straight highway from Che to Fidel. The highway was designed for landing airplanes in case of war. War was a real fear for Cubans: both because of the one-sided political rhetoric and because we Yanquis are only a few miles north. Our drive is comprised of cane fields, banana trees, a few ox carts, grazing cattle, and acres of fertile land vanishing under thorny marabou.

Havana is under dark skies and a cloud burst: a ‘cold wave’ has cooled temps to the 70s. Cabana Fort and Morro Castle overlook Havana Harbor and protect Old Havana, the largest fortress in the Americas. It is busy with a book festival. This is where the prisoners from the Bay of Pigs fiasco were imprisoned until an agreed price was reached for their release: medicine for men. 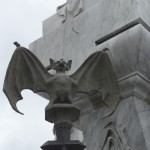 Drove thru several neighborhoods, some quite impressive, others dirty and deteriorated. Block after block of nationalized properties, now put to state use, others rotting away from neglect. We ate lunch at the beautifully restored home of a past Minister of Finance. A PtoP experience was the Mal Paso modern dance group performing in a former Jewish synagogue. A gift from the state? Enjoyed our walk through Colon Cemetery to see the spectacular crypts built prior to the revolution. Impressive baroque facades, statues, and tombs of the rich and famous, including Bicardi family and Hemingway’s favorite bartender who invented the daiquiri, for which I am acquiring a taste.

We lodge at the 1930s Hotel Nacional, an historic hotel visited by everyone from Sinatra to Mafia godfathers. My room faces the Malacón and Havana Bay with seas crashing over its sea walls and winds howling through hotel vents. Sadly, it is the dirtiest hotel room I have seen and the location is poor. Ate dinner on the outdoor patio which included two daiquiris!

One expert presentation: Havana City of Yesterday, Today and Tomorrow by Miguel Coyula, a university professor. Endless information to ponder. The beautiful mix of gothic, colonial, neoclassic facades are crumbling – an average of 3 collapsing each day – efforts to restore but inside is privately owned while state owns building. Revolution’s goal was housing equality so rents were reduced by 50%. But who can afford to maintain buildings when average wage is 20 CUC /month and a gallon of paint costs 135 CUC? “It reflects an unrealistic plan by the State.” The newly acquired freedom to buy and sell property (homes purchased with 20 years to pay, no interest) creates a wider gap between those with money to buy and those who need money to eat. Now buildings crumble with 15k people in temporary housing and 140k on housing wait list. A November storm caused 260 houses to collapse around their occupants.

The economy plummeted when Russians pulled out, so Cuba invited foreign investors and built hopes and hotels on tourism. Those working in tourist market thrive with maids earning more than a doctor. Others survive on remittances from Miami relatives. Without these sources of income, Cubans would starve. Mix together an aging population (every fifth person over 60 and on pension), a highly educated people (every 11th person has university degree), a brain drain where 20k a year leave Cuba (mostly for the US), and an ambitious and expectant younger generation who sees old out-of-touch men running the state.  Economic stratification grows and threatens the socialist model as much as the desire to buy a car or cell phone.

The economic devastation of the “Special Period’ after Russia’s sudden and total departure in 1991 cannot be ignored. It was a period of survival. 2.5 billion in remittances came in each year from Russia (some Russians blame Cuba for draining Russian resources). These stopped literally overnight leaving every poor family poorer. The fact that Cuba, and Fidel, survived is due to the tenacity, willfulness, and ingenuity of the Cuban. 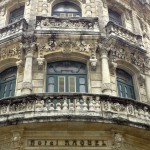 Walking Old Havana and its main squares gives opportunity to see the varied architecture and its restoration. One colonial structure houses a private restaurant while the next building is collapsing. Businesses, restaurants, street vendors and shops abound. Streets are clean and busy. Community enterprises, like the graphics arts workshop we visited, are thriving and supporting the neighborhood artists and tradesmen. All types of artisans are supported, like the Museum of Fine Arts. Not my preference but a fine example of the state’s commitment to preserving Cuban culture. Roaming the cobblestone or wooden streets, shopping the kiosks of book sellers and memorabilia, buying a painting or hand craft, or sitting in a cafe enjoying a beer are all part of Old Havana. 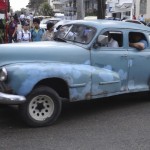 Streets are active with colorful, shiny classic cars, reading like a Who’s Who of Oldsmobile, Chevy, Buick, Cadillac and Plymouth. Few are anything but the shell of the original, held together with Cuban ingenuity and perseverance, their beaten bumpers, torn leather seats, rusted mufflers, and diesel engines barely holding together. Additions of CD players and stereos are a modern touch.

A second expert presentation: US – Cuba Relations: A Cuban Perspective given by Carlos Alzugara, an ambassador and world diplomat for 35 years. An interesting perspective as he walked the walk and TALKED THE TALK. The first thing that struck me is he once acted as an observer for South Africa elections. Representing a country who has not held a free election for President in it history?

Carlos felt relations could normalize. ” Will Obama come to the Latin American summit next year? Will US remove Cuba from its terrorist list (since 1982). Will the US stop allowing Cubans to receive all protections and benefits once their foot touches American soil? US never is willing to talk except in reaction to something Cuba does. Most relations before 1959 were influenced by mafia and the crime it brought to Cuba. The upper class ran things but always to please the US who supported Batista. People wanted the radical revolution.”

Well, Havana may be closer to Miami than any other city in Cuba, yet in politics it might as well be on different planets. I could ask these same questions. Politics and manipulation exists both sides of the bay, and Fidel has been a master of it for over 50 years. He has not missed a chance to condemn and blame the yanqui imperialist for Cuba’s ills, all stemming from the US embargo. Perhaps we have not negotiated with Cuba because there exists no legitimate government. We have not released the four remaining Cuban ‘spies’ from prison because perhaps they are defined appropriately?

Benjamin Franklin said it best: “Love your neighbor; yet don’t pull down your hedge.” There is no easy solution. How will its new Free Trade Zone outside Havana help Cuba? Thank you Cuba for refusing to shelter Snowden. But what of that North Korean ship of Cuban missiles and military gear? Cuban politics are fascinating and complicated but I remain convinced both parties will resolve their differences and become good neighbors once again. Cuba and US follow different trajectories but if we developed respectful relations with Russia and China, surely we can do so with Cuba. Perhaps it is not necessary. Over 1.6 million Cubans live in the US and continue to stir the cauldron, yet 400k a year return to Cuba bearing tons of gifts worth millions of dollars. Remittances amount to almost 1 billion dollars a year. Millions of Canadians and Europeans visit each year. Thousands of Americans visit Cuba, bringing their culture and dollars. We return impressed with Cuban culture and people. The more I meet Cubans and learn how they live and think, the less I care about a man named Castro and the more I care about the people. Normalizing relations will happen “very carefully – like two porcupines making love.” But it is inevitable, embargo or not, the fence will fall and relations restored between our peoples. 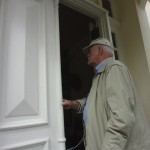 People to People connections fill the remainder of our day: we meet a local family in a nearby poorer suburb of Havana. They have a beautiful home and garden. The young lady is a typical professional: educated, articulate and modern. “We’re not rich, they think we are rich.” But they are rich compared to the average Cuban. Ignorance of economic stratification raising its ugly head. We visit Ernest Hemingway’s Finca la Vigia home and museum. Could not enter, just look into windows at animal heads and books. Gardens, including dog graves and his boat Pilar, provide views over Havana. No five-toed cats. Then to the Sisters of Charity who care for over 170 leprosy patients living at San Lazaro Hospice. Most come from areas in the east and may spend most of their lives here. No state support given. But the state doesn’t support religion, tho it is more tolerant of it.

At night, I watch the Malecón and its sea wall that protects the six lanes of road from the Gulf of Mexico. Huge waves splash over. The few cars are a block apart. All night revelers are heard above the waves, roaring wind and howling air vents.  Rum speaks?

Festival in the streets

Expert presentation: Religion and Society in Cuba presented by an ex-official from the Ministry of Culture. Highlights of spirited talk included two misconceptions: that Cuba is communist and catholic. Cuba is a society of color and class, but never religion. Catholic Church always supported wrong side and celebrated mass when Martí was killed and Cubans won’t forgive them. (His joke: only thing to survive disaster will be cockroaches, Catholic Church, Jews and Cubans.) Many religions came into country like Abakuá and Arará, who brought many varieties of music.  Poll showed. 15% religious, 15 atheist and other 70 a spiritualism or mysticism. “Pope came but we got things we wanted, another day off at Christmas. Cubans are not communist – they covet, survive, and will find a way.” Defined as stubborn and willful?

A full morning of People to People Connections interacting with students and faculty at a small rural school in Las Terraza, southwest of Havana, and learning about this self-sustaining community. A beautiful, tropical area of replanted trees after deforestation. Large rural school of open classrooms, polite students, but damp and dark. Chickens and dogs wander among the Che and Fidel murals. Had lunch at their vegetarian restaurant.  Later we visited teacher and students learning English in an after-school program.

Wonderful dinner at Las Tosdoro in Havana where we celebrated my friend’s 49th wedding anniversary. Sad to say farewell to the tour. But wait! Surprises ahead.

In transit to the airport, one last stop at Revolution Plaza with its huge caractures of Camilo and Che on the facing buildings. It is where Fidel makes his marathon speeches. However, no need to rush as upon arrival at the airport, we find our charter is “estimated 6:30,” some 8 hours away. So we reboard our bus, return to the Nacional, eat another lunch, and return to the airport at 3:30. There I surrendered my Visa to sit in the “lounge” hoping the “estimated” time is realistic. No where, when or why the charter hasn’t arrived. Around 8:30, about the time we began to empathize with Tom Hanks’ character, Victor Navorski, a plane materialized on the tarmac and we were off. First time I experienced passengers applauding upon departure.

“Say it with me, or suffer your shame., long live the land that yields sugar cane.” Cuban actor performing at Teatro Villanueva in Havana 1869.