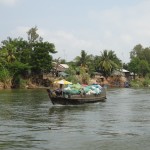 A chartered boat slowly takes us down the Mekong from Phnom Penh into Việt Nam. Việt Nam or “the Việt people of the south” means the people south of China, thus distancing themselves from the Chinese.

The Mekong is much as I expected: wide, brown, vegetation along the sides with large clumps of water hiyanths scattered in the waterway. There is some industry within sight and a new Japanese bridge being built linking villages on opposite banks. Crops of corn, livestock, temples, shanties with their water hose dipping into the river, some new concrete homes of the prosperous, old fishing boats, a few sand barges, and fish farms. I see little traffic to detract from the tranquility of the river.

We putt-putt along the Mekong to Châu Dõc where immigration processes us into Việt Nam. From one dictatorship in Cambodia to a stricter Communist dictatorship, we begin our tour of Việt Nam. It is another three hours by bus to Can Tho, our destination for the night.

Everywhere there is water, rice fields, and palm trees. And along the rough, pot-holed road are endless shanty shops selling what appears to be the same goods, little of which is made in Việt Nam. I wonder how individual sellers make a living? Along the street are one after another of the same poor shanties, mud and dirt for sidewalks, questionable water and electricity. Children are everywhere, obviously not attending school. Catholic churches have replaced the temples of Cambodia. 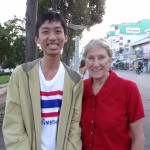 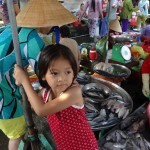 Arriving in Can Tho, many wedding parties are set up in the streets, their flower bedecked archways and food-ladened tables for guests line the streets. Today is a lucky day for weddings. Multitudes of shops and homes line both sides of the road while shacks on stilts hover over the brown sluggish water. The open house concept is taken to extreme, each home totally open to the elements; I can see the sewing machine and an occasional TV. Since the Russians left in 1991, progress appears to have slowed to a standstill in the rural areas. Huge stacks of wood are for sale, used for cooking. 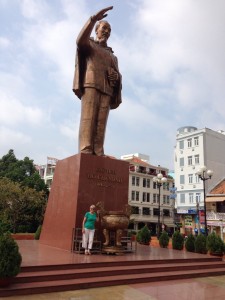 Ho Chi Minh in Can Tho

Walking along the river quay in Can Tho, one can appreciate the scenery, cooler weather, and friendly people. Smiles and nods, hand waves and greetings are the norm. In the middle of the quay is a huge bronze statue of Ho Chi Minh. I remember his dedication and persistence in driving the French from Việt Nam, then, in turn, the Americans. July 1976 marked the reunification of North and South Vietnam. Ho did not live to see it as he died in 1969, but his likeness is everywhere and a beloved icon to Vietnamese.

What a cruel time the war was. It was my generation who shot, bombed, napalmed, and waged years of war against the Vietnamese. Just to keep Russia in check? Any untouched by war’s cruelties? I think not. What memories linger? The horror of war in Southeast Asia, particularly in Việt Nam, was on all sides with no one the winner.

Today, Việt Nam seems a poor country of 90 million people. There is little freedom of speech here. The people hope for democracy but are cautious. It will not happen soon.

For Việt Nam, relative peace came after the war with Cambodia in 1985. Althrough tightly controlled by a Communist regime, the country is thriving with entrepreneurs. Every home seems to have a kiosk out front selling some goods. Competition is fierce. Sellers are eager to show you everything and make a sale. 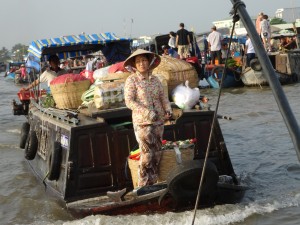 Need to buy from the countryside distributors? Sail the picturesque tributaries of the Lower Mekong Delta (Bassac River). Deposits of sediment from the Mekong enrich this verdant region. From it comes the fruits, vegetables, and flowers which supply the vibrant Cai Rang floating markets. Sail between the aisles of produce, fruit, vegetables and flowers. A lady selling lottery tickets putts by on one side while a large sampan unloads watermelons on the other. Farmers arrive with their produce, living on the boat with their families until all is sold. It is crowded and lively.

We step ashore at the fish market. Pans of flopping fish of all sizes, colors, and shapes fill the aisles. Squid, octopus, clams, sea snails, and shrimp are on sale. I walk past vegetables, frogs, every cut of the pig, chickens, ducks, and several bits of anatomy I do not recognize. 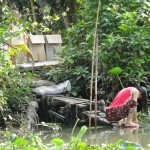 Life along the tributaries of the Mekong

Many tributaries run along the Mekong. Women cut morning glory for dinner, wash laundry in the river, wash themselves, sell produce, advertise stacks of long bamboo along the bank, while boats move commerce via the water channels. It is hard to see this as a Communist economy when capitalism is seen everywhere. Unfortunately, corruption is prevalent, which is obvious by the terrible roads. 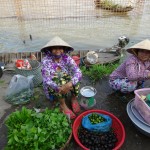 Back in the streets, there doesn’t appear to be a lot of unemployment. I note, no begging veterans. Many women wear the conical straw hat and a mask, but I am told women are covered because they value light skin as a sign of beauty and wealth.

Lunch is on the quay and consists of eight courses of vegetables, pork, chicken, rice and the ubiquitous watermelon, mango and pineapple.

-The flag of the Communist Party of Việt Nam is seen everywhere, so are the effects of Western Capitalism.
– Much of this part of Việt Nam is below sea level so they experience much flooding, and there is not a good sewer system as yet.
– Mostly motorbikes on the streets and fewer cars but more honking.
– Less English used and harder to understand; signage is very interesting but all in Vietnamese.
– Water, rice fields, and palm trees everywhere.
– I don’t see land mine victims like in Cambodia.

We depart for Ho Chi Minh City. It is about five hours of travel through green rice fields and small villages of busy people. Traffic is steady but constantly moving – and relatively safe. Drivers know the rules of the road and are polite. It generally resembles a massive game of dodge ball involving hundreds of motorbikes, a dozen bicycles, a couple cars, and our bus.

Tags: Can Tho, Việt Nam