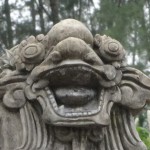 I begin my day listening to Big Sister blasting from speakers in the trees, spouting propaganda, reminding me of traffic laws, encouraging me to be a good citizen. Then I board my bus for the 100-mile, four-hour bumpy ride over The People’s roads to the overtly capitalized Hạ Long Bay.

Sidewalks not for pedestrians – filled with motorbikes and diners. 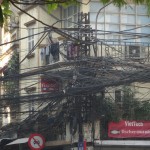 Hà Nội looks to be an interesting but typical big city. It is easy to forget I am in the government seat of its Communist Party. Crowded housing is the norm with many four and five-story tunnel houses. Housing is expensive at 70$ per sq. ft. Each building has its water tank on the roof as both water and electricity are undependable. Haze covers the city and air quality is poor. I am told there are 7 million people and 4 million scooters. I believe it. Seen everywhere on the sidewalks are the colorful red and blue low plastic stools where people sit to eat and drink, mostly the cheap fresh beer. The favorite tourist t-shirt? The one sporting a jumble of electrical wires, an ubiquitous sight in Asia.

Often I see the Việt Nam flag alongside the red flag with golden hammer and sickle, symbols of both worker and farmer. 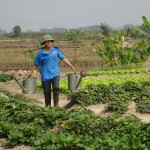 My route is a picturesque scene of beautiful rice fields, simple wooden stilt-houses, buffaloes and fish farms, duck farms and gardens. We stop at a multi-family vegetable garden of mints, lettuce, onions, and herbs. One man with a pole across his back labors to carry two huge watering cans from the pond to his rows of vegetables. Two rice crops are planted annually (3 in the south). The planting and tending of rice fields have changed little over the centuries.

I see many tombs in the fields. Vietnamese bury their dead in the earth and after 3-5 years dig up and clean the bones, place in a small coffin and rebury in a tomb. Many of these tombs are in the rice fields, thought to bring honor and good crops to the family.

Việt Nam is a prosperous country; it is obvious that capitalism is more popular than communism. I witness a strong economy and entrepreneurism. Many workers earn between $150-200 a month, while those fortunate to have gotten into the huge Canon factory may earn $350 a month. Citizens pay for health care and most education. However, some university is free, particularly for those who study education, health care or law enforcement.

There is advertising everywhere but this is one of the few countries in the world where I can read nothing. I recognize only a few words: garage, Canon, Sim, Playboy, Western Union, Pringles, Chevrolet, photocopy, massage, supermarket, and Merry Christmas and Happy New Year.

The complaint heard often is that one must pay under the table in order to get anything done efficiently, or at all. Corruption is behind every door and money is the key. But the citizens get even by ignoring many of the laws with the rule “Don’t get caught.”

Wedding tents and decorations are numerous as it is wedding season, common just before the Tet holiday. The legal age to marry for girls is 18, boys 20, but younger in the countryside. Many ignore the law. Viets are allowed two children but in 2014 the law was changed to allow more. It is good to know that boys carry more of the wedding costs here as weddings are quite extravagant.

It is disturbing to hear of Việt Nam’s military buildup and this year’s new law to require all men to serve two years in the military. Việt Nam’s boundary and territorial disputes with China are not a good thing; Vietnamese don’t trust the Chinese. In a strange juxtaposition of policies, in October 2014 the United States partially lifted its longtime ban on the provision of lethal arms to Việt Nam, a move that is intended to help Hà Nội strengthen its maritime security as it faces a more assertive China. The State Department notes that the policy change applies only to maritime surveillance and “security-related” systems.

As US concerns have grown over China’s increasing military abilities, officials have gradually moved to strengthen security ties with the Vietnamese. Việt Nam, who last clashed with China in 1979, is worried about China’s military presence in the region. Việt Nam’s anxieties were aggravated in 2014 when a Chinese oil rig was temporarily deployed in the South China Sea off the Paracel Islands, which are claimed by both China and Việt Nam. 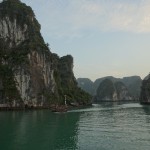 Hạ Long Bay (UNESCO) has hundreds of weathered limestone islands (some say 1969 which matches the year of Ho Chi Minh’s death) that rise above the turquoise waters of the Gulf of Tonkin. We board a Junk for a sail upon its waters. The Junks are no longer natural wood colors because someone with the power of decision discovered the color white while traveling, returned and ordered all boats, over 500 of them, be painted white.

The burning of the fields, use of coal, and millions of motorbikes, adds a haze to the distant mountains and geologic sandstone formations of Hạ Long Bay, or “descending dragon bay.” Just south of these tranquil waters is the site of the Gulf of Tonkin Incident also known as the USS Maddox Incident, two confrontations involving North Vietnam and the US in 1964.

USS Maddox, while on intelligence patrol, fired on three North Vietnamese Navy torpedo boats. A sea battle resulted, in which the Maddox fired over 280 shells, and  four USN F-8 Crusader jet fighter bombers strafed the torpedo boats. A second incident was said to happen two days later but later perusal of unclassified records show this may not have actually occurred. However, the sad outcome of these two incidents was the passage by Congress of the Gulf of Tonkin Resolution, which granted President Johnson the authority to assist any Southeast Asian country whose government was considered to be jeopardized by “communist aggression.” This resolution served as Johnson’s legal justification for deploying US forces and the commencement of open warfare against North Việt Nam.

Roomie and me on Ti Top over Hạ Long Bay

We dock at a fishing village. Not what I expected as the village is a floating platform with numerous netted tanks holding fish, oysters, shrimp, clams and varieties of local seafood. The owners live on the platform, with rather protective dogs, and buy and sell the freshest of fish. We also climbed the 400+ steps to the top of TI Top for views of the bay and its numerous Junks.

Hạ Long Bay’s jutting limestone islands, from stumpy fingers to ragged dragon backs, and calm aquamarine waters, is stunning, in spite of all the Junks. The Bay is a mature karst landscape developed during a warm, wet, tropical climate. Karst topography is a landscape formed from the dissolution of soluble rocks such as limestone. It is characterized by underground drainage systems with sinkholes and caves. The creation of a karst landscape over a period of millions of years requires a combination of a massive thickness of limestone, a hot wet climate and slow overall tectonic up lift. Hạ Long Bay had it all. And it still does.

After a vegetable carving lesson (I’ve never seen anyone cut carrots so beautifully, definitely wasted on a lazy cook), a wonderful dinner and restful night on board, we tender to Hang Sung Sot Caves. To reach the cave, one must climb several flights of stairs with too many other people. These are dry caves and though the route to them is narrow, the caves themselves are huge with high vaulted ceilings, made smooth and wavy by the waters that once filled the caves. And once inside, the chambers are adorned with stalagmites and massive stalactites hanging down to the cave floor. Of course, many rock formations have the prerequisite cute descriptions which I must struggle to imagine. 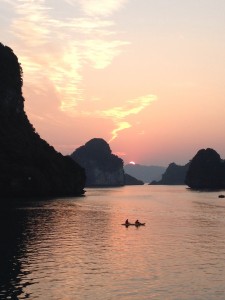 I end my day enjoying a Việt Nam beer and spectacular sunset.

Tomorrow, I depart this lovely respite for my return to the hustle and bustle of Hà Nội.