Holy Crap on a Cracker! Hà NộI is nothing what I expected. This city has it all for those looking for a vibrant (actually manic) environment. The streets have a deranged energy that only the young or courageous should travel. To even look at traffic, hurry, or dodge is a sign of trepidation. Dozens of motor scooters, a couple cars, a taxi, two cyclos, four bikes and varied vendors assault your every street crossing. But if you have the fortitude, then Hà Nội is the place to be. The streets are full of entrepreneurs, shops, bright colors, activity and food vendors. Just put on blinders and ignore the motor scooters zipping by within inches of your little bits. Drivers really do go around you!

Hà NộI’s architecture varies from Vietnamese, Chinese, a bridge built by Gustav Eiffel, modern glass high rises, and French colonial. Boulevards are wide but only to accommodate more traffic. Sidewalks exist but only as restaurants, parking lots, or for entrepreneurs selling everything imaginable ten times over. Commercialism is thriving on the streets of Hà Nội. The city’s French Quarter is beautiful with its trees, balconies, and mustard yellow buildings like the Opera House, Cathedral and Presidential Palace complex. I love the vibrancy but it is difficult to enjoy as one must remain alert amid the frenetic traffic.

And it seems appropriate in this city of 7 million that along with their motor scooters, Karaoke is a beloved pastime.

Before dinner, we attend a performance of the Hà Nội Water Puppets. This art form is unique to the Red River Delta of Việt Nam. Dating back to the 9th century, spectators sit around a pond while puppeteers work from behind a bamboo screen using long rods and strings to manipulate puppets. The ornate puppets are of a light water-resistant wood and lacquered. Puppets represent mythical creatures like the unicorn (not the one-horned horse) and national heroes who glide upon the water telling popular stories. Traditional instruments and singing provide background music.

I recognize the Ho Chi Minh Mausoleum by its mile-long queue. The mausoleum is located in Ba Dinh Square (inspired by Lenin’s tomb and Red Square). Here, Viet Minh leader Ho Chi Minh, Chairman of the Communist Party of Việt Nam from 1951 until his death in 1969, read the Declaration of Independence on 2 September 1945, establishing the Democratic Republic of Việt Nam Since then, his press and propaganda has continued to grow into a “personality cult.” So much so that one can be imprisoned for writing anything negative about Uncle Ho, and negative is relative to the communist party.

Mausoleum exterior is grey granite, while the interior is grey, black and red polished stone. The mausoleum’s portico has the words “Chủ tịch Hồ Chí Minh” (Chairman Ho Chi Minh) inscribed across it. The banner says “State of the Socialist Republic of Việt Nam forever.”

The embalmed body of Ho Chi Minh is preserved in a cooled, central hall and protected by a military honor guard. The body lies in a glass case with dim lights. I am told there are 7000 visitors a week but it seems all are in line this morning. Rules regarding dress and behavior are strictly enforced. No hands in pockets nor arms crossed. Ones files past the Chairman, single file and quickly. Contrary to Ho’s desire for a simple cremation, the Party felt he was far more valuable as a unifying icon for Việt Nam. The body is taken off display three months a year for maintenance, done in-house rather than flown to Russia as in the past. His pasty face retains the peaceful, smiling composure seen in photographs. After 45 years is he real or wax? 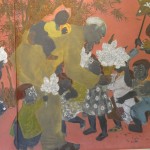 Ho is honored for leading the Việt Minh independence movement from 1941 onward, establishing the Communist-ruled Democratic Republic of Việt Nam in 1945, and defeating the French in 1954 at the bloody battle of Điện Biên Phủ. With Ho’s permission, the Viet Cong planned the Tet Offensive on 31 January 1968, gambling on taking the South by force and defeating the U.S. military. Ho insisted his forces in the south fight until all Việt Nam reunited under his regime regardless of the length of time it might take, believing that time was on his side. Ho was right. He officially stepped down from power in 1965, but remained a highly visible figurehead and inspiration for those Vietnamese fighting for his cause—a united, communist Việt Nam.

There was also a darker side. Not all Vietnamese welcomed Ho and his government. Violence erupted between rival Vietnamese factions. Ho’s allies were based upon who would support Vietnamese independence and unification. Influence for concessions, compromise for coalitions, tit-for-tat, an ally one year becomes the enemy the next. Opposition was “crushed.” Purges and killings occurred.

Had U.S. President Wilson and the Western powers recognized the civil rights of the Vietnamese people, as Ho hoped to negotiate at the Versailles peace talks following WWI, would the disaster to befall Việt Nam and all of Southeast Asia over the following seven decades been avoided? Unfortunately, Wilson ignored Ho’s delegation. Further radicalized, Ho became a symbol of the anti-colonial movement in Việt Nam. Later years spent working with the Russians and Chinese solidified Ho’s revolutionary ideals. Ho repeatedly petitioned President Truman for support, citing the Atlantic Charter, but Truman never responded. So many opportunities of cooperation lost to the West.

The 1968 Tet Offensive came with heavy casualties and shocked the US, which had believed the Communists were loosing. The positive spin the U.S. military had spun came crashing down. Ho believed they would eventually wear the US down and win acceptance of Hà Nội’s terms. Ho was right. He remained in Hà Nội until his death, demanding unconditional withdrawal of all non-Vietnamese troops from South Vietnam.

The Ho government’s humanitarian record reflects a typical dictatorship and suppression of rights. Declassified documents confirm that 1 in 1,000 North Vietnamese were targeted for execution during the “rent reduction” campaign; the number killed during the considerably more radical “land reform” was probably many times greater. The full death toll was even greater because victims’ families starved to death under the “policy of isolation.” As many as 500,000 North Vietnamese may have died during the 1950s and 1960s as a result of the policies of Ho’s government. 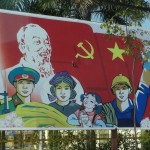 The Communist regime has propagated a personality cult around Ho Chi Minh since the 1950s, later extending it to the South, a crucial step in their propaganda about Ho and the Party’s past. “Uncle Ho” is glorified in schools. Opinions, publications and broadcasts that are critical of Ho Chi Minh or that identify his flaws are banned in Việt Nam. Both Vietnamese and foreign activists, writers, reporters and commentators who criticize anything about Ho in the slightest are arrested and imprisoned or fined for “opposing the people’s revolution.” This includes the rumor that Ho, while in China, married a Chinese woman in 1926, vehemently denied now in Việt Nam. Publications about Ho’s non-celibacy are banned. The Party maintains Ho had no romantic relationships thus portraying a puritanical image to the Vietnamese public and advancing Ho as the father of the revolution and a celibate married only to the cause.

In Việt Nam today, Uncle Ho’s smiling image appears on the front of all Vietnamese currency notes. His portrait and bust are featured prominently in most of Việt Nam’s public buildings, in classrooms and on family altars.

In 1987, UNESCO recommended that member states commemorate the centenary of the birth of Ho Chi Minh, considering his contributions in the fields of culture, education and the arts and who “devoted his whole life to the national liberation of the Vietnamese people, contributing to the common struggle of peoples for peace, national independence, democracy and social progress.” However, this was met with an uproar amongst some overseas Vietnamese who criticize Ho as a Stalinist dictator and blamed Ho for the human rights abuses of his government.

And so it goes. As for me, I like Uncle Ho in spite of his government’s faults. 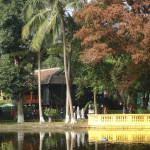 Closeby Ho’s mausoleum are his automobiles, the three homes he lived in, his offices, and personal bomb shelter – all revered sites because Uncle Ho “slept here.” His Stilt House is a simple aerie and the Koi pond a place of peaceful contemplation. Also nearby is the One-pillar Pagoda, a small but lovely temple and Buddha.

When eating the fruit, remember the one who planted the tree.

The Việt Nam Fine Arts Museum was more interesting than expected, housing Vietnamese art and sculpture, a lot of which depicts scenes from the wars with France and the US, a big part of their lives. The propaganda, government posters, and selection of prints of postage stamps are especially interesting. Also found in the museum are ethnic minority tapestries and clothing, landscapes, and stunning lacquer paintings from the 1960s. There were the ubiquitous Buddha statues, bronzes, pictures of Ho, and a sweet sculpture named “When eating the fruit, remember the one who planted the tree.”

Văn Miếu-Quoc Tu Giam or Temple of Literature is an 11th century temple dedicated to Confucius, sages and scholars. It is also the site of Việt Nam’s first national university. Built in 1076, the temple site includes five courtyards and a pavilion sheltering Chinese turtle steles of those who were successful with the royal exams. Recent graduates scurry around having photos taken in their gowns. 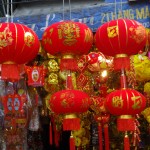 Riding an electric streetcar through the maze of crowded streets of the old French quarter is a hoot. This area has been the manufacturing and trading center for silk, rice, paper, fish and jewelry since the 15th century. Today, the streets are lined with endless shops and entrepreneurs. The length of one street sells flowers, the next sells hardware, another herbs and medicines, another lanterns. We creep through narrow streets amid the chaos that is Hà Nội.

I visit an ancient Vietnamese wood-frame home, lovely because it is open to air and light. I especially love the kitten who befriends visitors in his domain.

In the afternoon, as the day cools, we brave the traffic to stroll around the lovely Hoan Kiem Lake with its Red Bridge leading to a small island with the Ngoc Son Temple. The temple supposedly dates back to the fourteenth century. Our stroll leads to a lakeside cafe and a well-earned Beerlao, drunk while contemplating what I have learned about Hà Nội and Việt Nam. And I have learned a lot!

Second, Việt Nam is a prosperous country. Hà Nội’s shopping ranges from the lime seller in the streets to Valentino to SUVs. ATMs are everywhere, as are banks. I am told this prosperity is a result of President Clinton’s normalization of diplomatic relations with the Socialist Republic of Việt Nam in 1995. The U.S. embargo was lifted in 1994 creating a boom in trade.

I appreciate the deftness of the Vietnamese. Everything but everything is carried on scooters from vegetables to cows to the entire family.

Việt Nam is narrow and 1025 miles long and, though smaller than my home state of California, has about 90 million people. I contemplate that despite the horrors of the war, Việt Nam today is one of the most pro-American countries in Asia, with 76% of Vietnamese people viewing the U.S. favorably.

Having spent a week traveling from Ho Chi Minh City to Đà Nẵng, from Hôi An to Hà Nội, I admit to liking the Vietnamese and their country equally as well.