It’s Burma or bust! Since 1962, when a coup d’état brought one of the world’s most repressive regimes into power, Myanmar has been isolated from outside influences. It became one of the 10 poorest countries in the world and embroiled in dissension, accusations of genocide and child slavery, bloody suppression, dictators, drug warlords, and rebel ethnic friction. A British colony until 1948, in 1989 Burma returned to its traditional name of Myanmar (“fast and tough”) because the ruling council thought Burma was “too Burmese.” To keep iron-fisted control of the country, the ruling junta closed its borders to all but the opium trade and illegal logging. Myanmar became one of the least westernized countries in the world.

Enter 2010 – faced with economic collapse, or a moral conscience previously nil among Myanmar’s military, President Thein Sein began a series of reforms, including the release of political prisoners (among them pro-democracy icon Aung San Suu Kyi), and set his country on a path from pariah state to democratic governance.

The result is change.

I flew to Mandalay, a romantic sounding city if I take old movies seriously. But I imagine Burma to be more like the movies “Objective Burma” or “Escape to Burma,” maybe even “Rambo IV.” What I see is a flat country, many fields, lots of sand, cows and simple shacks. I could be anywhere in Africa.

Directly off the plane, we visit one of the most revered religious monuments in Myanmar: the Mahamuni Pagoda. Here sits a very fat Buddha of bronze covered in gold leaf. It is thought the image was created at the time of Buddha and blessed seven times by Buddha. Every morning monks perform a face-washing ceremony. Women remain behind and only men approach to apply sheets of gold to the statue. Each additional sheet makes him fatter. Sheets are $1 each and come in packs of five, which could feed a family for a week.

No shoes no socks no entry. I must remove both shoes and socks for all temples in Myanmar. What with the chewing of betel nut, starving cats, and pathetic dogs, I am loath to walk barefoot. And every corner has a temple.

We stop at a workshop where gold is pounded into thin leaves, more for the bathroom than the gold; we have to choose our stops wisely. It takes 30 minutes, about 1000 whacks, using a wooden sledge hammer. Then the sheet is cut again and the pounding proceeds until it reaches the desired thinness.

Not to miss a chance to see another Buddha, we visit the Golden Palace Monastery, a traditional wooden building. It was built by the King who founded Mandalay. The weathered wood was once covered in gold leaf. Huge teak pillars and numerous wood carvings decorate doors and windows. There is a beauty and simplicity about this building that is lost in the gold and glitter of other temples. 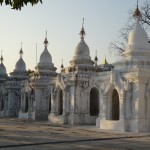 The Kuthodaw Pagoda is famous for the world’s “largest book” consisting of 729 marble slabs. The entire Theravada Buddhist Canon is painstakingly inscribed in the Pali language on these slabs. Each is housed in an ornate white stupa. The sun is setting and its pinkish tones highlight the many rows of white stupas and barren bodhi trees. Bells and bird calls accompany the end of the day, creating a peaceful scene.

The adjacent golden pagoda is stunning, glaring gold in the evening light. The 188 ft high stupa is gilded above its terraces and adorned with monkeys and Singhs which guard the temple. 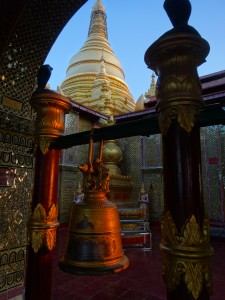 Anticlimactic to Kuthodaw is Mandalay Hill. We ride up in struggling open trucks, seemingly operating on three cylinders and a horn as we wind up a mountain road oblivious to traffic and pedestrians. The angle is steep – I have to hold on so as not to slide out the back of the truck. We risk life and limb for a sunset over Mandalay. The temple, pink and green mirrored glass, beautifully reflects the sun’s rays. Every direction I look I see a stupa. However, the crowds, smoke and haze over the city minimize the drama of a sunset over the river.

Mandalay is what one imagines Myanmar to be. Rustic, simple, still relatively unchanged over the past 100 years. Rich in monasteries, it is also becoming rich in tourists. Three million visitors came last year and at least a million more is expected in 2015. Growth and change during the past four years has been noticeable, or so our guide says.

“Things are easier now.” Burmese will openly say they can organize and protest, criticize the government, get visas to travel, get BBC news, and connect to Internet (though painfully slow). Our guide can buy a SIM card, once costing over $1500, for $2. Their cellular system reaches 26 countries (neither of my devices can find a signal but others do.) Many hotels have wifi though incredibly slow; I’m not seeing wifi cafés – yet. Turin, our guide, seems honest and forthright about the history and political situation in Myanmar. He says there are over 100 rebel groups in opposition to the present government. And there are many illegals coming from Bangladesh, mostly Muslim and very poor. No one wants them. There has been violent outbursts against the Muslims. Are the filthy children begging at the bus part of this ostracized ethnic group?

Driving is schizophrenic, passing dangerous, as cars travel on the right side of road but drivers can steer from the left or right. Myanmar can only import used cars from Japan and these are made for right-sided drivers. Buses and new cars have the driver on the left. Cars are very expensive with a typical $1000 used car costing $30,000 here. Chinese motorbikes cost $500, while Japanese bikes are much more expensive.

Children attend free public education to the 5th grade and learn English but only reading and writing. If one wants to attend longer or learn listening and speaking skills, one must pay. For an extremely poor population, this is nearly impossible. There also is a huge gap between the very rich and the very poor, little in between.

Across the royal moat and at the Palace gate, I read “The Tatnadaw shall never betray the national cause.” For the uninitiated, the Tatnadaw is the armed forces of Myanmar once led by General Ne Win who took over by force in 1962. What is their cause? I think it already somewhat lost whatever iron-fisted cause it is. Democracy develops from the continued success of Thein Sein and progressive reforms.

Bea and in Mandalay

Dinner is very special tonight. My Swiss daughter Bea is also in Mandalay and we are able to share a few hours. She is in meditation retreat nearby in Sagaing. It is a real joy to see and spend some time with her. I share the news of my mosquito bite in Bangkok and she assures me “no worry, dengue fever is prevalent in Bangkok and that is good because it is easier to cure than malaria.” Okay. We both agree that Myanmar is very special. 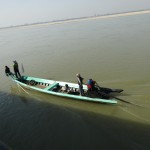 It is a fascinating drive to the jetty at Lay Kyun Man Aung in Sagaing to board the 131′ Ayeyarwady Princess II. Traffic is sparse and our speed limit seems around 35. Cattle on the road, heaping stacks of watermelon, piles of teak longs, Monks in their dark orange-red robes doing their alms walk, nuns in their pink robes, and lots of battered motorbikes share the narrow, bumpy road. There’s a sad lot of dogs and cats and innumerable strays on the streets.

We spend our day on the wide, rather shallow Ayeyarwady River. Our pace is about 5 knots. We weave about the sand bars and seek the deepest channel. Our “depth finder” is a man with a bamboo pole. This time of year the river is from 5-15 feet and getting shallower by the day. We pick up local pilots along the way to guide us down the river.

“Welcome to the country with a smile.”

We cruise downstream to Yandabo Village, where the British and Royal Burmese Household signed the Yandabo Treaty in 1826, bringing relative peace to the otherwise fractious ethnic tribes of Burma. Today, the village is famous for it’s terra cotta pottery-making. They use local riverbank clay to create hundreds of pots a day. I see the process from the mixing of the clay, to turning the pot, applying designs, and then firing the pots in huge mounds of rice grass before women carry them on their heads to the river for shipping. The work is all done by hand and bullock and it does take a village to make a pot. For each pot the village gets 50¢. It is a simple village of wooden shacks, a two room school for the younger children, laundry and bathing done at riverbank, and dust everywhere (soon to be mud in rainy season). Children wave hello and stare at the white foreigners. We feel very welcome as we tramp through their lives and snap our pictures. 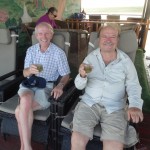 Floating down the Ayeyarwady is a welcome respite. We weave around huge sandbars, moving slowly downstream, sharing the waters with large coal and sand barges, tugs, long-boats, fishing skiffs, and a few small cruise ships. Boatmen wave. The riverbanks are a series of sand dunes, corn fields, Brahmin cattle, the occasional village, laundresses and bathers, palm and grass fishermen tents on the sandy beaches, palm trees, and miles of flat open land.

The sunset is spectacular as a large red sun slowly sinks past the horizon as junks and motorboats go up the river. We pull to shore and moor for the night using bamboo poles jammed into the muddy bank. The breeze is lovely, the stars are shining and the night is left to frogs, crickets and, unfortunately, mosquitos.

The morning sunrise is almost as spectacular as the evening sunset, especially because it occurs around 7am. The ship inches up the Ayeyarwady as we learn more about Myanmar.

“Myanmar is a democracy now and harder for junta to shoot someone because the world is watching. Before they could shoot a hundred people and no one knew.” I am assured by both guide and boat staff that things are very improved. “I could never have spoken openly to you about these things before 2010.” Many do worry about the military and its reaction should its power be diminished and they express concerns about ethnic minorities. The sign outside the Police Station declares “May we help you,” but our guide assures us we do not want their help. Clashes between Buddhist and Muslim minorities are a worry. There continues to be an alarming amount of illegal cutting of teak trees along with Chinese and Thai smuggling in the north. Pictures of Aung San Suu Kyi and her father General Aung San are everywhere and it is clear Burmese want her to run for President.

Myanmar is a country in flux. 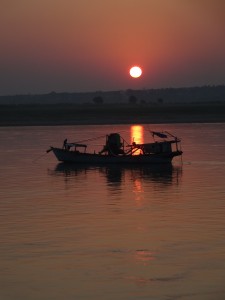 A hopeful sunrise for Myanmar?

In Southeast Asia I have visited three one-party communist governments and one country under a military coup d’état. None of these countries screamed “communist dictator.” I did not know what to expect with Myanmar. What I see so far, other than an enormous love for temples, stupas, and giant Buddhas, is a beautifully simple country yet untouched by the effects of mass tourism. Myanmar is not the fascist road to Mandalay that has been made out by the US press and other activist. With perseverance and the support of the world, it will eventually resemble the happier movies.

How long before Myanmar’s unique personality is corrupted by tourism? How long before there is a McDonald’s in Mandalay? Sadly, KFC is coming, can Big Macs be far behind?