Graves represent servicemen around the world, from Britain, Canada, India, Africa, Australia, Napalese Gurkha, and two American pilots who were flying with the Royal Canadian Air Force. Honored for their service are U.S. Flying officer W. B. Gibbs and Flight Lieutenant L. D. Thomas from Texas.

Walking through the ubiquitous, thriving Burmese market and rural streets, we arrive at Kya Khet Wai Monastery to observe monks take their last meal of the day; monks eat just twice a day. There are over 400 monks, some as young as 8.  I witnessed the Monk’s morning alms walk in Lao. What food and alms monks collect before sunrise is their sustenance for the day. Their first meal is after alms and their second is around noon. Monks lined up and walked to a dining hall to eat while sitting on the floor around round tables. The food was attractively served, looked nutritious and well-prepared. However, this is their last opportunity to eat until tomorrow morning. The monks seemed friendly and unfazed by cameras pointed at them, but then there were monks with iPhones and cameras shooting photos, too.

We continue our bus ride east for another three hours. For an American to stop bitching about U.S. highways and potholes, one needs to travel the roads of Myanmar. The bumps and grinds are constant. There is not a section of any road that is not rough and jagged with broken concrete. The government, who built the roads, cut lots of corners to save money and buy those Porsches. The horn is a Burmese BFF and in constant use. The bigger and louder the horn, the more respect one gets.

I should not complain as there are only 14 in our bus. Public buses we pass, though bigger, must have at least 100 crammed into their seats. I am positive they do not enjoy air conditioning, water, and candy snacks. The smaller taxi trucks have people clinging to the back of each truck hoping not to be thrown off while zipping over the roads.

The scenery is green, pastoral, and the soils red, indicating a fertile agricultural area. Crops are varied: rice, betel leaf, cashews, cotton, beans, and fields of watermelons. Bullocks, used to work the fields, graze knee-deep in flooded fields. There are goats, duck farms, fish farms, and chickens everywhere. A  man standing upright in his skiff herds his hundreds of ducks down a canal.

Small villages, most without roads or sanitation facilities but with garbage piles and countless wandering dogs, line the road. Those with businesses are fortunate to operate a trade. Our guide explains that property along the road has skyrocketed in value in the past four years. These businesses are mere shacks parked on property bought for a few dollars. Now property, much of it bought by foreign investors and rich Burmese (re: military & government) may cost thousands. The average Burmese earning $100 a month no longer can buy land unless it is rural and off the roads.

Our destination is the Mon State and one of Myanmar’s landmarks, Mount Kyaiktiyo and the Golden Rock. This big golden boulder is known for it’s precarious position and religious importance. It is, of course, completely covered by gold leaf and delicately balances on the edge of a cliff. Legend says a strand of Buddha’s hair keeps it in place. The rock and its pagoda are the third most important Buddhist pilgrimage site in Myanmar after the Shwedagon Pagoda in Yangon and the Mahamuni Pagoda in Bagan.

e arrive at Kin Pun ‘base camp’ for lunch, watching the large open trucks full of pilgrims depart for “the rock.” As I enjoy my meal and Mandalay beer, I have no idea what is ahead. I was told it would be cool and maybe rain. (I receive this warning with skepticism – with Burmese “cool” is relative.) The trucks are big, perhaps one-ton pickups with thin benches in back. Each truck is packed end to end with people, at least 40. Children stand in back.

Fortunately, we get our own truck. I am aware the ride up is over 33 hills and twice as many curves to an altitude of about 3600 ft. The ride will take about 45 minutes to climb 6.8 miles, sometimes one way where we wait for downhill trucks, to an upper staging area.

What I did not know were the numerous hair-pin curves to get around those hills and the speed which the driver gleefully drove them. I am sure it is his challenge to see if he can give his passengers a life and death experience, especially us Westerners. We zip up the lushly green mountain, attack the first turn with a vengeance then gather speed for the next hill and curve. Temperatures and humidity drop quickly, or maybe it is the sweat of fear drying on my skin. We are in the mountains and the cooling breeze is wonderful as we tempt fate with another hair-pin, twisting curve, steep drop offs to the unknown on my left. The driver avoids sleeping dogs in the road and swiftly twists and zips up the mountain leaving his passengers to contemplate their fates and how this ride could be integrated into Six Flags amusement parks.

We arrive joyfully alive to the upper area, which used to be traversed on foot up a steep path, now done by said speedy truck. It still is a challenge as one must walk the last few hundred yards. Herein my fears arise: I must walk it barefoot, the rock may teeter off its precarious position before I arrive, and after all this effort women won’t be able to get near the rock.

Paved steps lead to the Golden Rock. Those unable to climb are carried on stretchers by porters. Views are spectacular, even though haze and smoke limits how far I can see across a dense jungle canopy. It is a cool 70° or so, bright and sunny. No need for the socks and coat I brought. There are pilgrims everywhere, many from Thailand. Ahead, I note the rock is still teetering.

Legend tells that Buddha, on one of his many visits, gave a strand of his hair to a hermit. The hermit gave the strand to the king, with the wish that the hair be enshrined in a boulder shaped like the hermit’s head. The king had inherited supernatural powers from his father, an alchemist, and his mother, a naga serpent dragon princess. They found the rock at the bottom of the sea. With the help of the king of Heaven, they found the perfect place at Kyaiktiyo where they built a pagoda and enshrined the strand. It is this strand of hair that prevents the rock from tumbling down the hill. 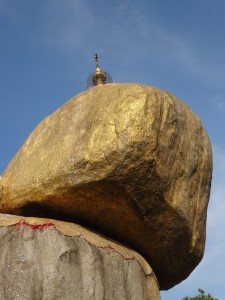 The granite boulder, 25 ft. in height with a circumference of 50 ft., is covered with gold leaves pasted on by devotees. Men pass over a bridged abyss to affix squares of gold. Looking from beneath the boulder, the rock table on which it rests is independent of the boulder itself and the golden rock has an overhang of half its length, perching on the end of a sloping table of rock. Gleaming golden in the lowering sun, the rock seems to defy gravity as it looks dangerously on the verge of rolling down the mountain. Atop the Golden Rock is the small 24 ft Kyaiktiyo Pagoda. And yes, only men may approach and touch the rock.

The boat used to transport the rock turned into a stone. This is also worshiped by pilgrims at a location close to the Golden Rock. It is known as the Kyaukthanban Pagoda, or stone boat stupa.

The pagoda complex houses several viewing platforms, pagodas, Buddha shrines, and Nat spirits. A thriving plaza has many establishments selling religious paraphernalia. Adjoining the plaza area is a village where restaurants, gift shops, and guest houses are located. Pilgrims can rent linens or bring their own mats and blankets and sleep around the square, which many are doing. It’s a party atmosphere. We leave them to their nightly festivities, collect our shoes, and begin our tramp back down the mountain to our hotel.

Our walk is down several flights of rock steps along what is the old traditional path still taken by serious pilgrims who eschew the trucks. Lining both sides of the road are shops and homes, selling everything but beer, a TV blasting in most homes. Garbage is a persistent problem. Then we tramp down a very steep paved road for over a mile before reaching a hard-earned beer.

We were told the lighting of candles, meditation and offerings to the Buddha continues throughout the night. It is Full Moon tonight and a very special time for Buddhists. We might hear the pilgrims’ chants coming from the area of the pagoda. However, we did not expect the beautiful melodic broadcast of Monks’ chants amplified over the “jungle broadcasting system” 24-hours a day. After an overnight stay filled with chants, we learn Monks were chanting the Theravada Buddhist Canon I saw inscribed on the 729 marble slabs at Kuthodaw Pagoda in Mandalay. I am told this can go on for days. “Oy vay.”

What ascends must descend. The morning is beautiful, clear and cool. We climb the platform stairs for boarding our truck, happy to escape more hours of broadcasted chanting. Downhill, it is the brakes I pray will be there when we arrive. We merrily zip down the mountain, through the jungle foliage, around the turns, with nary a concern.

We begin our bouncy ride back to Yangon, learning about everything Burmese as we drive Asian Highway One through countryside and rural villages. Our bus horn is getting a workout.

We stop a few minutes at a cashew farm so we could see the tree and how cashews grow. Unfortunately no samples given.

We briefly stop at a Betel leaf farm where large bamboo poles are used for the Betel vine. Leaves are harvested monthly, earning the growers about $500 a month. The slightly bitter Betel leaf is used for chewing in place of tobacco. They spread a lime paste on the leaf, add chopped pieces of Betel nut, maybe add some tobacco and spices. The chewing is done by many, especially in rural areas. And spitting betel juice is a national pastime. (Say “betel juice” three times for fun.) Side effects of the chew are bad teeth, kidney stones, and mouth cancer. Interestingly, the actual Betel nut comes from a different tree.

Shwe Tha Lyaung has one of the largest statues of a reclining Buddha in the country. At over 170 ft. this Buddha is massive. There is the usual legend about why it was built, involving a king, sacrificed sons, evil spirits, falling in love, bad father-in-law, conversion to Buddhism, and happily ever after. This Buddha, like most, is built of bricks, covered in plaster, then decorated with gold. Proving if you build it, the gold will come, no matter how poor the people.

Perhaps a betel nut chew encouraged our guide to explain Valentine’s Day in Myanmar. One doesn’t call their lover a word that means ” little heart” because in translation it means “two balls.” So a word that means “little liver,” an organ one can’t live without. I find the story looses much in translation. It may have been we were tired after the chanting all night or the suggestion by the reclining Buddha that we were ready for a nap. At the time it was pretty funny.