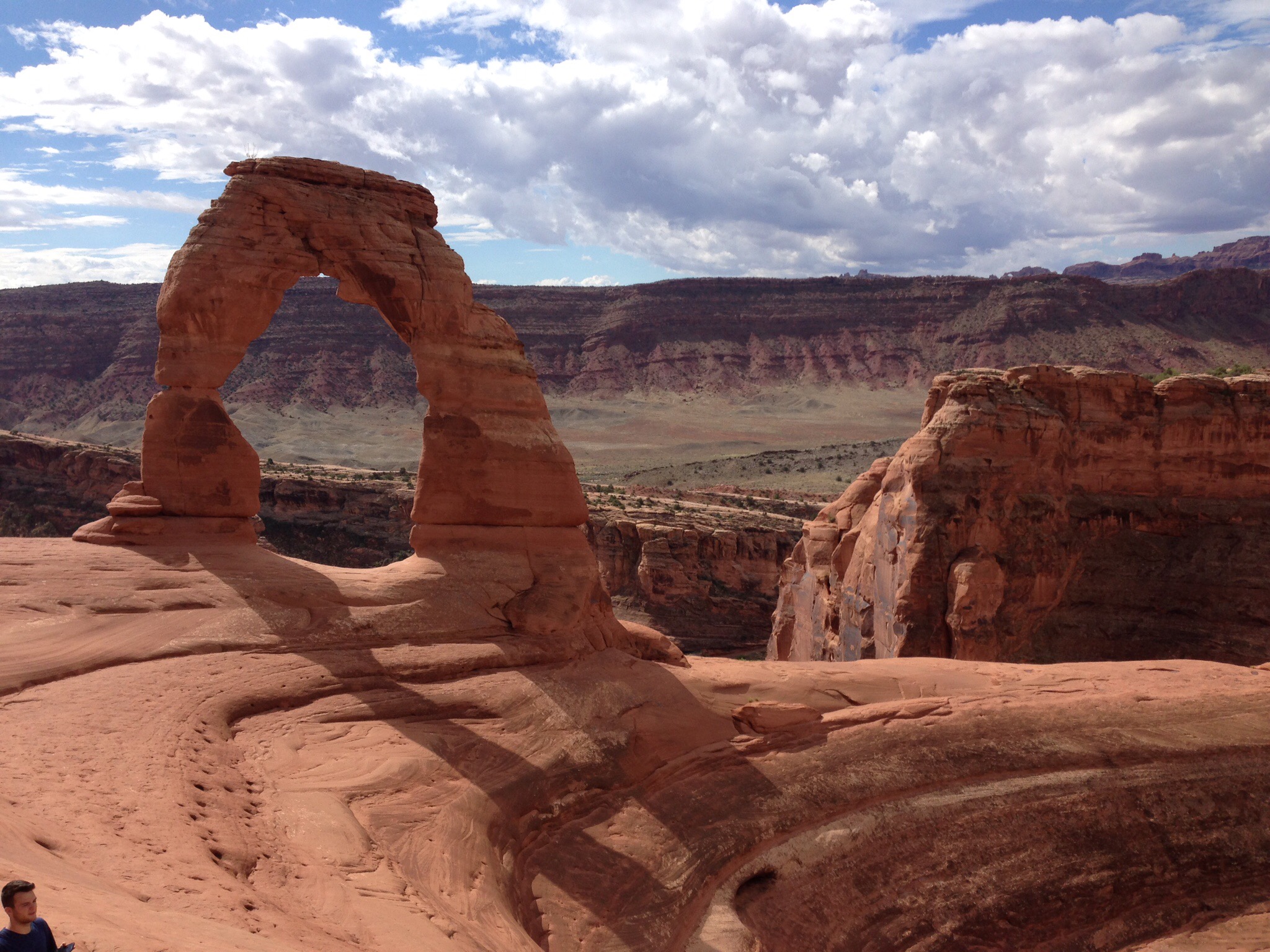 Night rains have washed the Grand Canyon dust from my car, cleaned the windshield, and brightened the day for exploration under cloudy blue skies. All the better for enjoying the dramatic landscape of the Canyonlands. And here once again is my favorite sculptor at work – the Colorado River.

My first stop is Arches National Park. More people line up at its entrance than I’ve seen for days. Using my Senior Pass for free admission, I follow the line of cars up the steep cliff face onto the plateau of the park. Five years ago, I made a short visit here and vowed to return. I’m thinking about two hours should get me to the arch. Little do I know that some six hours later, I’ll still feel I haven’t seen enough.

Three Sisters gossiping about the flow of tourists through Arches NP

The sky is a variety of blues with plenty of white clouds and off toward the northwest some rather ominous dark clouds. Arches couldn’t be more dramatic, a result of water and ice, extreme temperatures, and an underlying base of salt deposited over 300 million years ago when a sea flowed over the region. Over 100 million years of erosion sculpted a landscape filled with natural arches and some incredibly dramatic red sandstone cliffs. Over 2000 arches ranging in size from 3 feet to the massive Landscape Arch of 306 feet fill the park.

This is a park of change. Weathering and other forms of erosion slowly create  additional dynamic landforms. Arches form and expand, and unfortunately, fall. All formations seem to have a name. However, it is easy to ignore the names and just be amazed by the beauty, grace, and drama of what lies before me. There are numerous pull outs for vehicles. This is a wonderful thing, as I seem to be stopping every few feet in order to gawk and take photos. Here, Kodak, if it were still making film, would be in hog heaven.

The Colorado River plays a secondary role here. It twists its way along the southern boundary of the park and through Moab on its way southwest into Canyonlands. A scenic byway follows it’s curving path northeast as it flows through canyons, forms rapids, and whips around Big Bend. This I’ll have to save for my next visit.

Snapping countless pictures of beautiful rock formations, I head to my primary destination – Delicate Arch. The strenuous trail begins at Wolfe Ranch and is approximately 3 miles round-trip. It’s the 480’ elevation gain that gives me pause – the trail guide says it’s all uphill going but downhill back. This proves to be somewhat inaccurate. The day is already warm and the first half-mile of red sand path is good. However, when I top the first hill, I look ahead to see what lies before me. To say the least, the view is daunting. 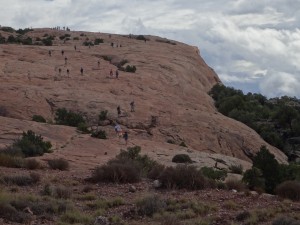 Massive sandstone monolith on my path to Delicate Arch

Ahead is a steep slick rock dome representing most of that 480′ elevation gain. This is my first indication that I would be, once again, climbing Uluru (Australia’s Ayers Rock)! For that is exactly what I am reminded of by the massive sandstone monolith laying in my path. The trail is marked by a series of small rock cairns. I think, “I climbed Ayers, I can do this.” However, I climbed Ayers when I was 30 years younger. “But,” I say to myself, “now I am more stubborn.”

The path climbs steadily up the huge monolith and crests into a level area before reaching the top of a rock face where I traverse narrow ledges with magnificent views. I can pretty much scramble wherever I want as long as my legs and nerve hold out. No rails and safety nets for the  fearful or clumsy. But once at the top, I realize the climb has been worth it. Before me is the beautiful Delicate Arch, sort of the poster child of arches. 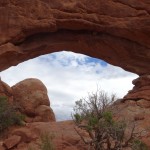 This is only the first of many arches and windows that I’ll visit during the day. To reach most of these sites, I must hike moderately challenging trails. Beauty doesn’t come easy in this park. Sometimes the trails are easy, other trails are more difficult where I climb sand paths, scramble around rocks, and ascend stairs cut into the stone. But the views, the balancing rocks, the arches, the fantasy rock formations like Park Avenue and Courthouse Towers, are amazing. Pine Tree Arch frames a green pine tree, Tunnel Arch, Double Arch, North Window, South Window, Turret Arch, Skyline Arch – all centuries in the making. And each is impressive, noble, and fragile. 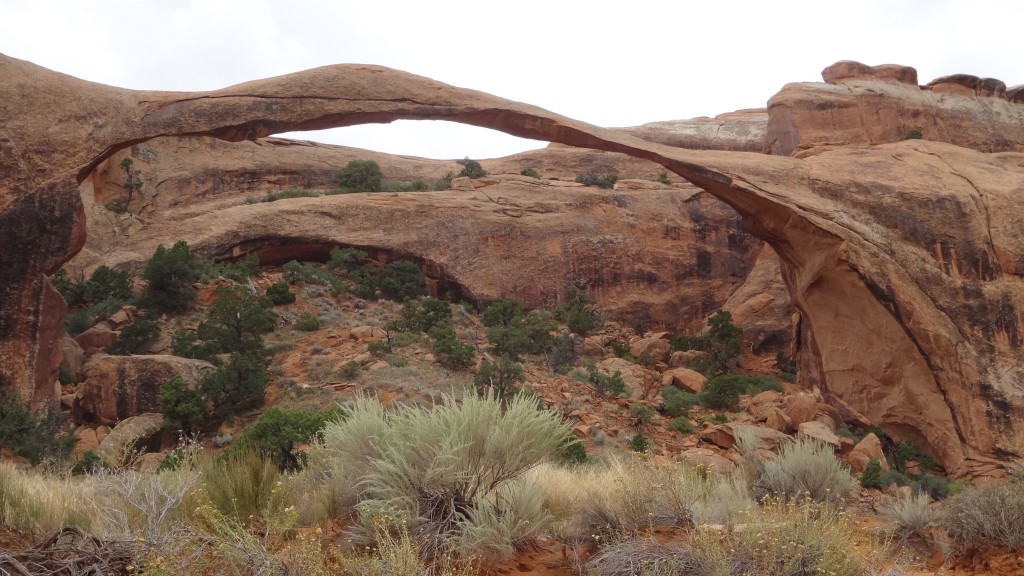 Probably no arch is as fragile as Landscape Arch – a ribbon of rock spanning over 290′ and considered to be the longest natural arch in the world. Since 1991, different slabs of sandstone rock have fallen from the arch. Today, a huge crack traverses a section, indicating stress and erosion may eventually destroy it. But then, I think many of those balanced rocks I see appear as if a breath of wind or a little shake of Earth will cause them to roll from their precarious perches.

Throughout the afternoon I’ve watch the dark blue skies to the north. I can see rains falling to earth in sheets. Colors have been intensified, the reds bolder, the contrasts more dramatic. But my concern is with the possible flooding of roads. However, Rangers assure me that Canyonlands, to the south, should not be a problem to drive – yet.

The approach to Canyonlands National Park is actually very misleading. It looks like any open pasture land in the high desert. There are buttes and rock formations but mostly open range grazing for cows. However, immediately upon entering the park I am taken aback by the views of incredibly beautiful, deep and rugged canyons  stretching for miles. This is the heart of the Colorado Plateau. Few trees, low scrub, wind whistling through the brush, and a wilderness of rock for as far as I can see to the horizon. It is a jaw-dropping vista to behold. 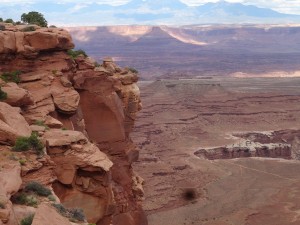 Before me at Shafer Canyon Overlook are vistas hard to comprehend. Below is the mesa’s edge and what is called the White Rim, a nearly continuous sandstone bench some 1200 feet beneath me. Another thousand feet beneath this bench flows the Colorado River shadowed by sheer canyon cliffs. And this overlook is only the beginning. The Colorado River joined forces with the Green River in carving two central canyons, forming three vast benches of land: The Maze, The Needles, and Island in the Sky. The artistic results are rugged and of vast proportions.

I think it might be fair to describe Canyonlands as a mini-Grand Canyon or perhaps the Colorado River’s practice run in creating a canyon before it’s ultimate test in the Grand Canyon. I was expecting a park similar to the Arches. What I found was canyon after canyon, broad benches, massive mesas, sheer walls of colorful rock layers, and views that stretched to a mountainous horizon 100 miles distant. The Grand Canyon is refined while Canyonlands is wilderness. 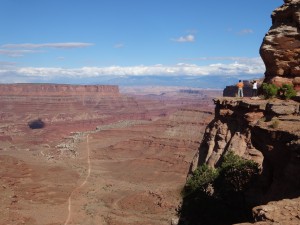 But, Canyonlands is no poor cousin to the Grand Canyon. Indeed, standing at the 6240′ rim at Buck Canyon Overlook, looking over the sheer canyon cliffs and down upon valleys and mesas, admiring colors and shapes, I believe that here is the Colorado’s pride and joy. It was her first effort at canyon sculpturing. Perhaps it was her best effort.

I cross the Colorado River as I return to Moab. How many times have I crossed paths with this mighty sculptor over the past few days? I should have counted but I know I have driven along and over it in three states and over a distance of about 800 miles. Near the headwaters in the Rocky Mountains, the river looks wide, fresh and deceptively calm. It cuts its way southwest, creating a wide red sandstone canyon through the city of Moab before continuing to carve its way through Canyonlands, rushing down to Glen Canyon, filling the backsplash that is Lake Powell. Escaping from the Glen Canyon Dam, the Colorado rushes through Marble Canyon on its way to some of its finest work – The Grand Canyon. In this past week of travel, the artistic work of this river has never ceased to amaze and enthrall me.