A Return to Corfu

I was last on this same spot two years ago in July 2014. Then, I was here via a cruise ship celebrating a friend’s retirement; no other reason for a retired person to be in this region in summer. Had a great time visiting Achilleion Palace, a sweet monastery and even sweeter winery. Probably my sweetest time on Corfu was in 1972 when I backpacked with a couple newly found friends onto Pelekas Beach to sleep on the sand under the stars and moon.

I am surprised to find myself in Corfu for what is actually my fourth or fifth time as it is not particularly my kind of town. But I am told Corfu is considered part of the Balkans (Corfu was the capital of Serbia for a time) and so we include a visit to Kerkyra in our itinerary. And that is fine with me as I hunger for a Greek salad made in Greece, a change of beer, a boat ride on the beautiful waters where the Adriatic meets the Ionian. Easier just to say we float our boat on the Mediterranean. I just did not expect to trade a beach accommodation for a bed at the end of a busy airport runway.

In the morning, after a spectacular sunrise, we take a ferry out of Sarandë Albania for a sunny, pleasant 2-hour ride to the island of Corfu, Greece. Land of Zorba and retsina wine. Opa! 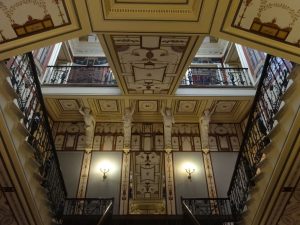 We visit Achilleion Palace, built by Empress of Austria, Elisabeth of Bavaria, also known as “Sisi,” wife of Austro-Hungarian Monarch Franz Joseph, third longest-reigning monarch of any country in European history. Achilleion was just one of several palaces used by Sisi throughout her life.

Probably escaping the demanding nature of the formal Habsburg court life, for which she was ill-prepared, and definitely avoiding the reach of her overbearing mother-in-law, Elisabeth moved around a lot. Following the 1889 double suicide of her only son, Crown Prince Rudolf of Austria and his young mistress, she built a summer palace on Corfu naqming it Achilleion with the mythical hero Achilles as its central theme. However, it seems the panoramic views nor the statue of Achilles were enough to surmount Elisabeth’s lifelong struggle with an eating disorder and depression. But it was a beautiful palace to which she could escape. Elisabeth wrote: “I want a palace with pillared colonnades and hanging gardens, protected from prying glances – a palace worthy of Achilles, who despised all mortals and did not fear even the gods.” 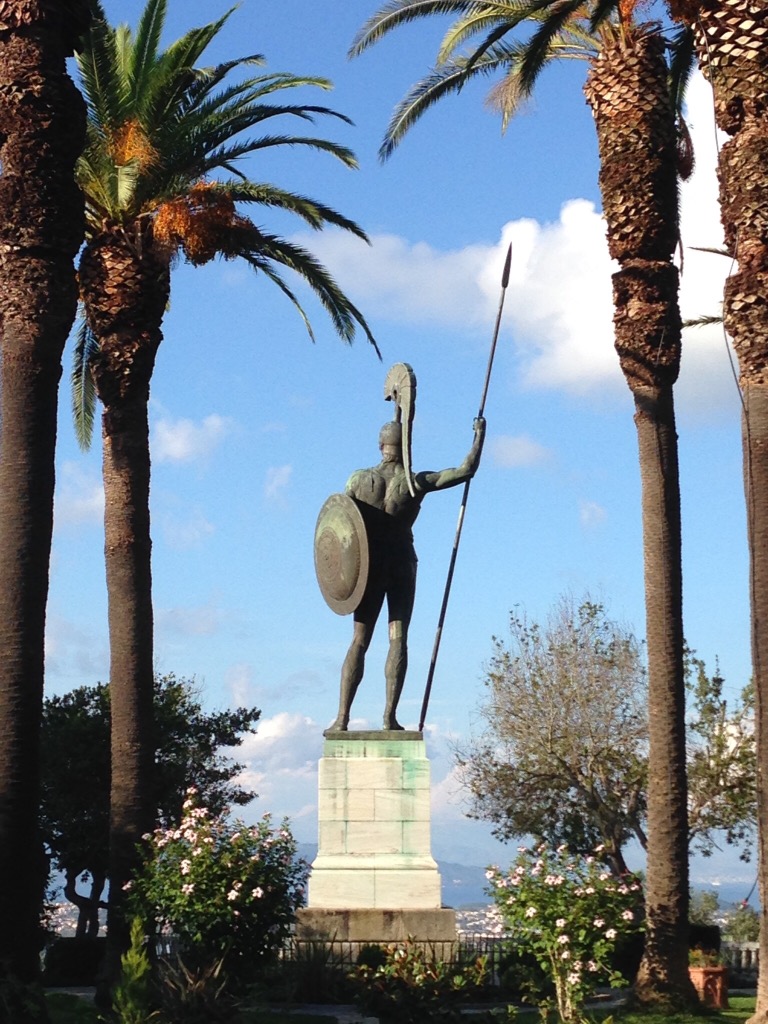 Achilleion is small and simple by Habsburg palace standards. In fact, the Empress seemed more obsessed with her own beauty than the palace. The grand stairway, it’s decorations and mirror, is possibly the most unique feature. The panoramic fresco on the upper level of the stairs, showing the Triumph of Achilles as he is seen dragging Hector’s dead body in front of the Gates of Troy, is well done. Classic Greek statuary fill the gardens which offer magnificent panoramas of Corfu and the Ionian Sea. (The casino scene of the James Bond film “For Your Eyes Only” was filmed at Achilleion.)

Elisabeth used the place often until 1898 when she was assassinated in Geneva by an Italian anarchist, stabbed with a long thin needle. German Kaiser Wilhelm II purchased Achilleion in 1907 and used it as a summer residence. He expand on the main theme of the grounds and commissioned his own Achilles statue, sort of a “man’s version” of the hero – an imposing bronze sculpture that stands tall facing toward the city, spear in hand in full hoplite uniform and shield. Elisabeth’s more tragic version was relegated to a less prominent location.

We also make a short stop at the Paleokastris Monastery and the very crowded Church of Holy Virgin Mary. For me it was much driving, crowding into a small hot chapel for a few minutes, a bathroom break, and could just as well been spent having another retsina at lunch.

Before we arrived at our hotel, we stopped for a panoramic view of the sea and the picturesque Vlacherna Monastery on its own little spit of land below. Ditto, could have stopped for another retsina. 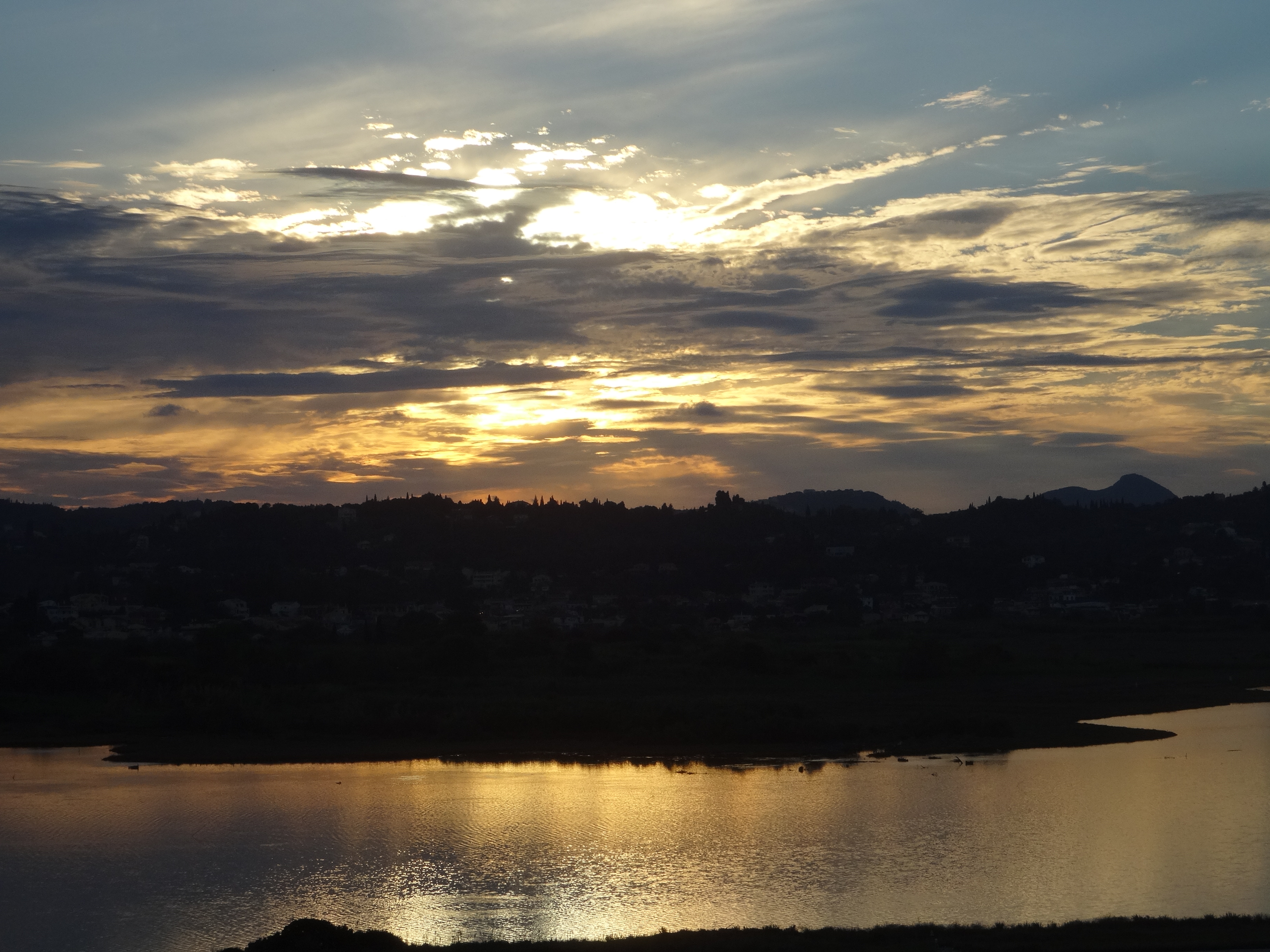 We finally arrived at our “Grand” hotel which really put me in need of more retsina. Located at the ass-end of the Corfu Airport runway, I spent “happy hour or two” toasting passengers as their planes roared down the runway, jets blasting with power as they lifted into the sunset, escaping Corfu as I am left in this crummy hotel. Opa!

After a very cold dinner and no improvement for breakfast, we are led on a walking tour of the historic old city of Corfu. Streets are pleasant except for the 6000-8000 cruise ship participants hanging about with selfie sticks and ridiculous shorts. We are able to walk past the wonderful Old Venetian fortress on the promontory which initially contained the old town of Corfu, Spianada square, a bunch of architecturally interesting buildings, along some marvelous narrow streets and among endless “shoppes” (as opposed to kiosks and stores). We visit the Synagogue. We briefly enter the 1580s Ayios Spyridon Church, a single-nave basilica that houses the relics of Saint Spyridon (and lines of people to see his silver casket). Its painted ceiling is gorgeous. 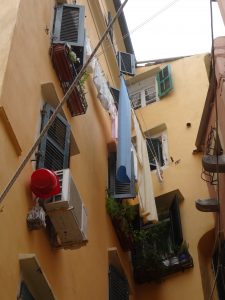 Escape the shopping streets to discover life in Corfu

Like most walking tours, you walk a lot, listen to, hopefully, interesting narrative, and maybe learn about something you might have time to visit later on your own time. Pretty much what we did. It is good to hear about the locals’ laundry habits, how they pipe water in and out of their old buildings, and about the narrow stairs within these old houses.

I mention the Old Fortress because I climbed it’s walls and bastions in 2014. Evidently Byzantine fortifications were here first and the Venetians replaced them with fortifications of their own design in the early 15th century. A big change when they separated the promontory from the rest of the city of Corfu by creating the Contrafossa, a moat or sea channel. It must have been effective because the fort successfully repulsed all three major Ottoman sieges: the great siege of 1537, the siege of 1571 and the second great siege of Corfu in 1716.

I still have not made it to the top of the New Fortress, built between 1576 and 1645. In Corfu, that’s new. The new fortress is just above the port and supposedly its fortifications included 700 pieces of artillery with a range estimated to reach the Albanian coast. Perhaps Hoxha built extra bunkers because of this.

Instead, it is a small bit of shopping, some walking along the streets and back ways of Corfu, and a Greek beer at one of its many cafes. And we dine at a restaurant near our hotel, enjoying delicious Greek food (grilled octopus) and retsina. Pretty much why most people come to Corfu.

Never thinking I would say it, but tomorrow, yippee, we get to return to Albania. Opa!