Departing our Drin River ferry at Lake Koman, we proceed by the worst “road” imaginable to Shkodër, located on the southern shore of Lake Shkodër. (The story on the road is the government paid to build it – twice. Currently, the pissant politician is enjoying his villa in the south of France and I am bouncing through holes as big as Smartcars and over stones the size of bricks.) Shkodër is one of the oldest and most historic towns in Albania. On the way, I am distracted by dozens of little “turtle shells” along the road and fields. This is a good time to learn about Albania’s love affair with bunkers.

Enver Hoxha was the communist dictator of Albania from 1944 until his death in 1985. Once in power, he served in every capacity of importance, generally killing off the opposition. A hardline Stalinist who dabbled in elements of Maoism as well, Hoxha was sort of a single-minded guy when it came to suppression and absolutism. He actually broke with the Soviet Union when Krushchev began his reforms, seeing him as too soft. Hoxha was hostile to his neighbor countries, hostile to Tito and Yugoslavia, hostile to everyone. He saw enemies and invaders around every corner and as a result, Albania became an ultra-isolated country. Because of his paranoia and fear of invasion, he developed his program of “bunkerisation.”

The 40-year period of Hoxha’s rule was characterized by the elimination of all opposition, a prolific use of the death penalty, long incarceration for his enemies and resettlement of their families to remote villages that were strictly controlled by the Sigurimi (secret police). He bankrupted the treasury preparing Albania against invasion by outside forces. And he convinced his 2.4 million people to believe the same. 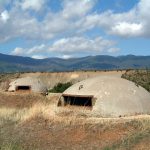 Hoxha’s program of “bunkerisation” resulted in the construction of steel and concrete bunkers in every corner of his People’s Socialist Republic of Albania. Not only was every family required to have their own little bunker, but bunkers appeared from mountain passes to city streets. Over 750,000 one-man concrete “turtle shells” were to act as look-outs and gun emplacements along with chemical weapons. The bunkers were built strong and mobile, with the intention that they could be easily placed by a crane in a previously dug hole. The types of bunkers varied from machine gun pillboxes, beach bunkers, to underground naval facilities, and even Air Force Mountain and underground bunkers. Try as they might, these bunkers have been a tough nut to crack and dynamite has failed to rid the countryside of their presence. So Albanians have learned to live with them.

The bunkers were abandoned following the collapse of communism in 1990. Most are now derelict, though some have been reused for a variety of purposes including residential accommodation, cafés, storehouses and shelters for animals or the homeless. A few briefly saw use in the Balkan conflicts of the 1990s. These bunkers are still a ubiquitous sight in the country, with an average of 14 bunkers for every square mile.

On the other end of the humanitarian scale is Mother Teresa. In Albania, as in Macedonia, statues and tributes to Mother Teresa are common. Mother Teresa was born in Skopje Macedonia but her parents were Albanian. Her statue on a corner in Shkodër commemorates her roots and connections to Albania. 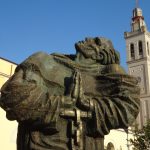 Statue in front of Cathedral of St Stephen

I also visited the large Cathedral of St Stephen, dedicated to the first patron saint of the city. The original St. Stephen Cathedral is now in ruins in the Rozafa Castle. During the first three centuries of Ottoman rule, until 1762, the bishops were made to live outside the city. Persistent appeals to the Sultan finally led to permission to rebuild the church in 1851. An earthquake in 1905 and bombing in 1913 during a military siege damaged the bell tower and the clock. But far worse was yet to befall the church. 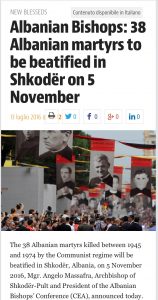 Dictator Hoxha hated and outlawed all religions so the Cathedral was closed in 1967 and turned into a communist sports center. The towers were destroyed and the portal was boarded up. Still worse was to come under Hoxha’s terror when 38 priests and leaders of the church were executed (other religions and religious leaders suffered the same fate – 99% of Shkodër clergy were killed by the communist).

In 1990 the Cathedral was reopened and in 1993 it was visited by Pope John Paul II. In this most Catholic of northern Albanian cities, on 5 November, Pope Francis will come to Shkodër to beatify the martyred 38 priests. 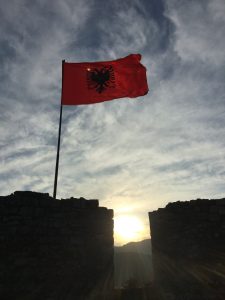 Rozafa Castle is above the city of Shkodër. It is a sturdy Venetian fortress rising imposingly on a rocky hill, 430 ft above sea level surrounded by the Drin and Bojana rivers. The fortress was extremely important as it straddled a vital east-west trade route. Due to its strategic location, the hill has been settled since before the Middle Ages and was an Illyrian stronghold until it was captured by the Romans in 167 BC.

The castle has been the site of several famous sieges, including the Siege of Shkodër by the Ottomans from 1478 to April 1479 (more on its defender and national hero Skanderbeg at tomorrow’s stop in Lezhë) and a siege by the Montenegrins in 1912. Today, the castle affords a beautiful setting for wedding photos and a great place to watch the sunset.

I mentioned that Rozafa Castle was an Illyrian stronghold until 167 BC. Who were the Illyrians? How are the Albanians connected to them? 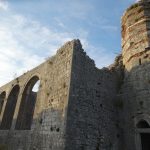 The Illyrians were a group of Indo-European tribes in antiquity who lived in the western Balkans and on the southeastern coast of Italy. The territory the Illyrians inhabited came to be known as Illyria to Greeks and Romans, and roughly corresponded to the area of the former Yugoslavia, and most of Albania The first account of Illyrian peoples comes from ancient Greek texts of the middle of the 4th century BC. These tribes were probably extinct by the 2nd century AD.

The name “Illyrians,” as applied by the ancient Greeks to their northern neighbors, seems to have referred to a broad, ill-defined group of peoples, and it is unclear to what extent they were linguistically and culturally homogeneous. In fact, a few ancient peoples in Italy may have had Illyrian origins and most likely followed Adriatic shorelines to the peninsula, coming from a geographic “Illyria”. “Illyrians” seems to be applied to a specific Illyrian tribe who came in contact with the ancient Greeks during the Bronze Age, causing the name Illyrians to be applied to all people of similar language and customs. The term “Illyrians” last appears in the historical record in the 7th century.

Though many artifacts have been found from the time of the Illyrians, little is recorded nor known about them. However, in the communist era, a goal of Hoxha’s was to rid the Albanian of any ethnic connection to Slavs. Therefore, within the archeological and ethnographic museums and literature there is the effort to connect Albania’s past with the Illyrians. 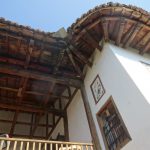 The Ethnographic Museum of Shkodër, a former home of a rich tradesman, is a wonderful example of Shkodër architecture. Built at the end of the 18th century, the Turkish-style house has a beautiful curvature to its roof, carved wood beams, decorative tiles and Turkish windows. The most important aspect of any Shkodër home? A vein of water as the home had to have a water source first before building. Foundations and floors are quarried rock, and balconies are open to the air. The museum is filled with ethnic clothing, art, and artifacts from as early as 6000 BC, including Illyrian artifacts of the Iron Age. Upstairs are the typical Ottoman living rooms and kitchen. Up to 50 family members lived in the home with the men getting the best sitting rooms and views.

It is a fascinating end to our exploration of Shkodër, “the soul of Albania.” Here I sense a mixture of cultures, evident in its history and everywhere one looks in the streets and markets. The view from my hotel room is an example of this mix with the sight and sound of St. Stephen’s bells, while from a different direction I can hear the modern Xhamia e Madhe Mosque and its call to prayer. Each plays its own music of the ages.