Queen Elizabeth National Park (QENP) is Uganda’s most visited national park. QENP occupies over 764 sq mi of savannah and forest, volcano rims and crater lakes, salt flats and swamps in the Western region of Uganda. The park extends from Lake George in the northeast to Lake Edward in the southwest and includes the Kazinga Channel which connecting the two lakes. Our Mweya Safari Lodge sits on a volcanic rim overlooking the channel and its myriad of animals.

The park is a 68-mile, harrowing 3-hour drive southwest of Murchison Falls over dirt roads. I’ve complained enough about the roads getting to Murchison Falls and Kibale. The roads, ruts and humps haven’t improved an iota. It is a long, hot, dusty and eventually annoying ride that must be endured to see this marvelous park’s diversity.

QENP includes the Maramagambo Forest and borders two game reserves and the Kibale National Park. On the other side of the park is the the Virunga National Park in the Democratic Republic of the Congo. The park was founded in 1952 as Kazinga National Park, but renamed in 1954 following a visit by Queen Elizabeth II shortly after her becoming queen. We will be visiting much of the varied terrain of this park from its savannah and animals, its volcanoes and crater lakes, and at the southern tip its tree-climbing lions. The park is as varied as it is large.

QENP is known for its wildlife and the Kazinga Channel is host to large groups of animals coming to its shores to drink. This is why we are here. A large family of mongooses greet us as we drive to the docks. We board a small private boat to cruise the channel while enjoying a Nile Lager and the afternoon sun. 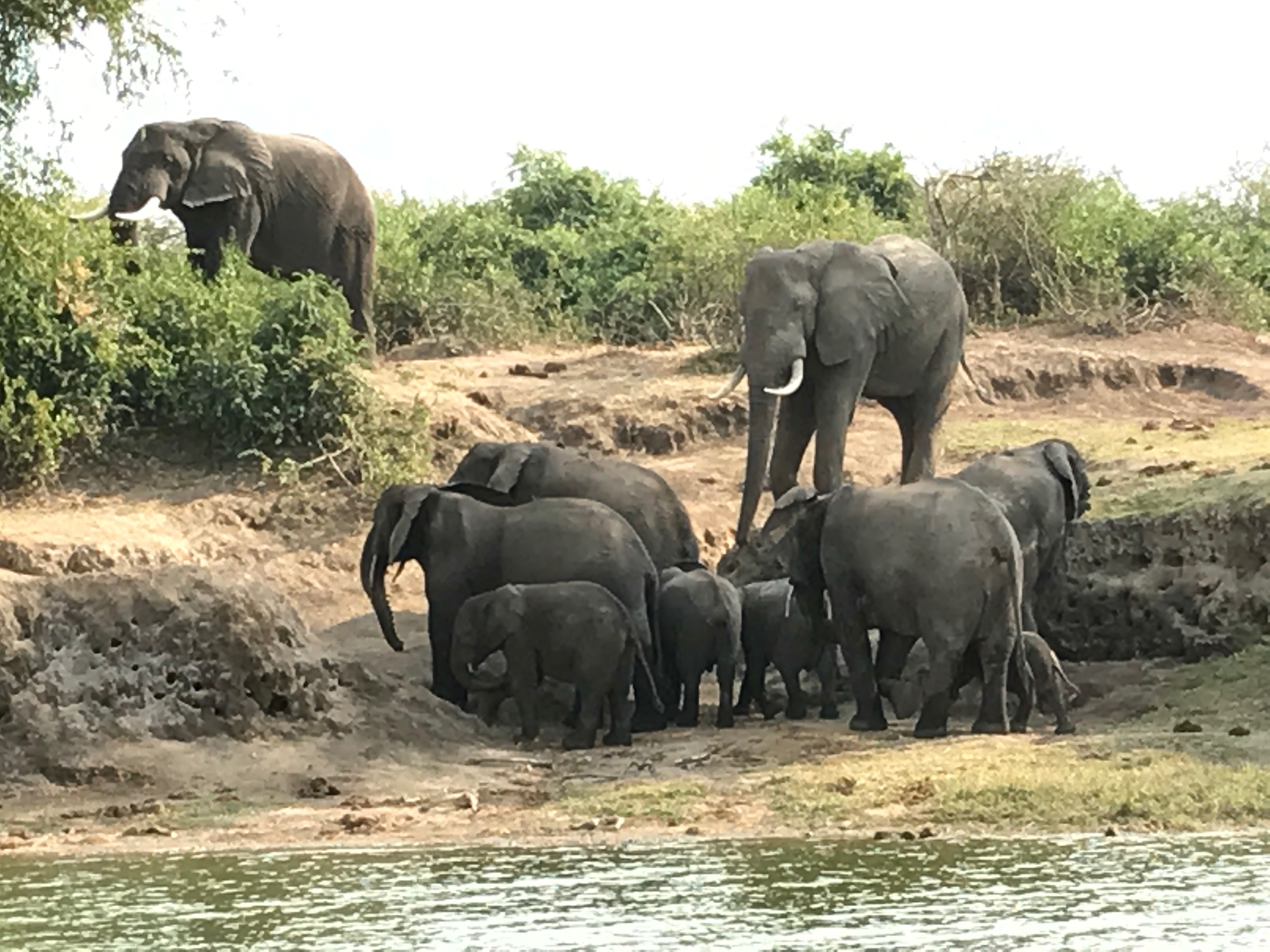 Along the shore are numerous elephants, Cape Buffaloes, and hippopotami. There are a few crocodiles and we are told that the larger crocs are relocated elsewhere. Most of the crocodiles we see are between 2-4 feet. This habitat is home to 95 species of mammal and over 500 species of birds. The Skimmers seemed most abundant and delightful with their precision swooping and skimming of the water.

We quietly glide past a large groups of hippos and buffalo cooling in the water with many more lounging along the banks. A three foot croc sunbathes within a couple feet of a relaxed buffalo. Evidently everyone is well fed and not interest in arguing for space. The ever present warthogs can be seen trotting away, tail straight in the air. Also, a larger variety of forest hog is seen in the distance.

Possibly a highlight of my afternoon was the surprise rumblings and sudden thunderstorm. Some bolts of lightening split the sky but alas, no rainbow. The air cooled and a refreshing breeze could be felt. The air smells cleansed and sweet. The fast moving storm was a delightful precursor to a quiet sunset.

As I retire, the sounds of monkeys and night birds fill the air. I feel surrounded by the baboons as they communicate to each other. Once again, when lights are out, it is pitch black outside and all that remains are the stars and sounds of the animals who own the night.