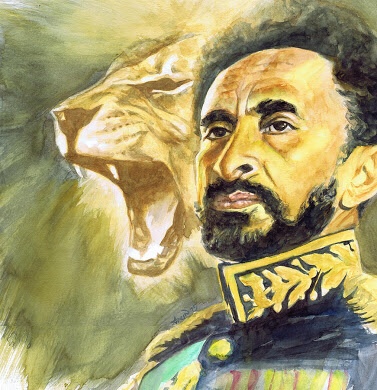 Traveling Ethiopia, I read and listen for opinions concerning this historical icon and controversial man. I know how I feel about Emperor Selassie. But how do Ethiopian’s view him?

Born Tafari Makonnen but known to the Western World as Haile Selassie, he was Ethiopia’s regent from 1916 to the time he became Emperor in 1930. Selassie ruled until a military coup forcibly removed him in 1973. He lived the final two years of his life in confinement and died, some say mysteriously, in 1975 at age 83.

Selassie fled in 1936 after the Italians ruthlessly invaded Ethiopia with superior military equipment and air power against Ethiopian camels and spears. It was a matter of pride for the Italians to avenge the embarrassing loss to Menelik II at Adwa in 1896. It was a matter of greed for Mussolini. To meet his objective, Mussolini ordered mass aerial bombings and the use of chemical weapons. Western powers, including the League of Nations, rather than offend or push their “ally” into the arms of Hitler, turned their backs on the Ethiopians. The people were defenseless and denied the purchase of arms to protect their lives. Selassie pled to deaf ears at the League. Finally, by 1941, the British decided it was in their best interests to assist Ethiopian patriots in throwing the Italians out. So, the British ran things for a while.

In spite of his treatment by “allies,” the emperor continued to be a friend of the West while pursuing a policy of decolonization in Africa, which was still largely under European colonial rule. In 1942, Selassie abolished slavery, imposing death penalties for slave trading. In 1961, he was instrumental in pursuing “national independence, sovereignty, territorial integrity and security” of countries via the Non-Aligned Movement. These countries represented nearly two-thirds of UN members containing 55% of the world population, mostly in countries considered to be developing or the “Third World.” Selassie also initiated the concept of the United States of Africa, and espoused African Unity and principles of collective security, certainly not treatment shown to him and his country leading up to WWII.

Selassie’s western views and modern, progressive policies made him popular in America and led to Ethiopia becoming a charter member of the United Nations in 1945, and his political thought and experience in promoting collective security have proved important. He made enemies because of his suppression of rebellions among the landed aristocracy, who opposed his reforms, as well as among critics that Ethiopia failed to modernize rapidly enough. Some detractors felt Selassie was autocratic.

A disastrous famine in 1973 led to a military coup. As happened so often during that era, a committee of low-ranking military officers and men, The Derg, tasked themselves to investigate the military’s demands. Instead, the Derg took advantage of the government and deposed Selassie in 1974. What followed were years of Communist rule and a loss of the liberty for which Ethiopians had fought and died.

The last year of his life, Selassie was imprisoned in the Grand Palace and most of his family were either in exile or in jail, a better end than the 60+ officials of his government who were executed without trial, including Selassie’s grandson, in what is called “Bloody Sunday.” The communist continued in control until 1991 when they were thrown out by the present far-left People’s Democratic Front.

Today I visit some remaining symbols of Emperor Selassie’s history:

The Tiglachin Monument to “Our Struggle” is more often referred to as the Black Lion or Derg Monument. Dedicated in 1984, the 10th anniversary of Selassie’s overthrow, this 164’ pillar, statues and accompanying wall reliefs are a memorial to Ethiopian and Cuban soldiers involved in the war over disputed territories between Ethiopia and Somalia in 1977. Selassie is shown on horseback, ignoring the people. “Down with imperialism” is prominent along with praises for “liberation,” all properly Marxist. This monument does not honor the Derg regime but its statues were donated by North Korea. Whatever you want to call it, it is one of those typical soviet-style monuments found around the world, espousing a belief that has been proven an overblown lie. Typical for these symbols of bad memories, no-one knows what to do with it.

The Red Terror Martyrs’ Museum is dedicated to those killed under the Derg government. As I travel through late-departed communist countries now freed from their chains, these monuments and museums offer a fascinating look into lives under communism. Genocide, murder, denial of a free press and opposing opinions, human rights violations – it follows a deadly pattern. But for each of these museums I visit, it represents one more symbol of proof that humanity will win. The museum has English captions and displays of torture devices, photos of victims, and houses quite a few bones and skulls found in mass graves. Certain captions, like “the Emperor used consider himself as a messiah and enjoyed the naïveté of his subjects in considering him as a king sent from heavens” led me to believe there is little pro-Selassie about the museum.

Never, Ever Again is enshrined in the hearts and minds of Ethiopians and all people for that matter.

Holy Trinity Cathedral, better known as Selassie’s church, is the second most important Ethiopian Orthodox church in the country. The original Holy Trinity Monastery dates back to the reign of Emperor Menelik II. This cathedral was built in 1942 to commemorate Ethiopia’s liberation from Italian occupation. Its exterior is a mixture of styles with a large copper dome, spindly pinnacles, and a plethora of statues. Today, the church is being decorated with long streamers of colorful flags and banners in preparation for the upcoming festival of Timkat. 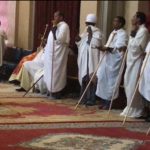 Inside, the square columns, decoration and murals are modest. A priest and several monks chant, ring bells and pound bass drums. Overall, the effect of the banners, chanting, robes, and incense create an exotic Orthodox Christian pageantry. But, the tombs are what draws the pilgrims and myself.

Buried in the front churchyard is the British suffragette, anti-fascist activist and life-long supporter of Ethiopia, Sylvia Pankhurst. Sylvia was one of the very few people outside Ethiopia who protested Italy’s occupation; she moved to Addis Ababa in 1956. Her son Richard, founding member of the Institute of Ethiopian Studies, continued in her legacy. He died last year and is buried beside his mother.

The graveyards surrounding the cathedral are worth a stroll and filled with interesting tombs and dedications to martyred archbishops, priests and important officials, artists and citizens as well as members of the Imperial Family. Monuments are dedicated to the remains of those massacred in Addis by the Italians in 1937, slaughtered in response to an assassination attempt against the Fascist Viceroy of Italian East Africa. In addition, nearby are the monument and tomb for the ministers of Selassie’s imperial government, bloodily executed by the Derg regime in 1974.

But it is the Aksumite-style granite tombs of Emperor Haile Selassie I and Empress Menen Asfaw that draw much attention. The Empress was interred here after her death in 1962 but her husband, the dethroned Emperor, was brought here only a few years ago.

In 1992 after the fall of the Derg, the emperor’s bones were discovered under a concrete slab on the palace grounds. His death in 1975 is held suspect by many. Officially called “respiratory failure” after a physical exam, many believe their emperor was assassinated, or at the very least encouraged to die. The country was not allowed to publicly mourn or bury him. For almost a decade Ethiopian courts attempted to sort out the circumstances of his death while his coffin sat in Ba’eta Church, near the tomb of his great-uncle Menelik II.

Finally, on 5 November 2000, Haile Selassie was allowed an imperial-style funeral by the Ethiopian Orthodox church. The post-communist government was not entirely happy about it. But today, I and others can pay respect to this man, recognized as a descendent of Solomon and Sheba.

Behind the Church is a small museum containing the thrones of Menelik and his daughter, Empress Zewditu along with crowns and other gifts from the royal family. Artifacts, icons and hand written manuscripts are on display. What is noteworthy is the church’s obvious relationship to Judaism. Oriental Orthodox believe in a unified Christ and the Devine, as opposed to the “two natures of Christ” followed by Catholics. The Ethiopian Orthodox place a heavier emphasis on the Old Testament, practice similar dietary rules, male circumcision, women cover their heads, men and women worship separately, and their observance of Saturday as the sabbath though they hold the Lord’s Day on Sunday, are all similar to traditions in Judaism. The Star of David can be found throughout the church and on the Emperors’ crowns. 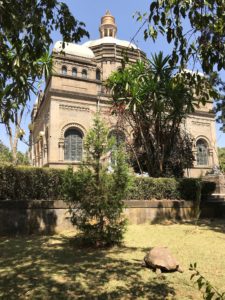 The church was closed but the groomed gardens and resident group of tortoises are an enjoyable respite from horrendous street traffic, smog and heat. I watch the faithful approach the building, kissing its stone steps and praying. The birds coo and caw while a call to prayer echos over the city.

I probably best remember the latter decades of Haile Selassie because of Bob Marley. Begun in Jamaica in the 1930s, the Rastafari movement (Selassie’s title Ras—meaning Head along with his family name Tafari Makonnen) revers Selassie as the returned messiah of the Bible, God incarnate. He was viewed as the messiah who would lead the peoples of Africa and the African diaspora to freedom. Selassie’s official titles were Conquering Lion of the Tribe of Judah and King of Kings of Ethiopia and Elect of God, descendent of Solomon and Sheba.

Bob Marley’s posthumously released song “Iron Lion Zion” refers to Haile Selassie. The Rastafarians still honor Selassie. It appears that, even though there is no special place in Ethiopia for the remaining royal family, the memory of Emperor Selassie is honored. Statues, portraits and his symbolic lion abound in Addis. The people seem aware of his faults but proud of his legacy.

In a 1967 recorded interview Haile Selassie appeared to deny his alleged divinity. The interviewer says: “there are millions of Christians throughout the world, your Imperial Majesty, who regard you as the reincarnation of Jesus Christ.” Selassie replied:

“I have heard of that idea. I also met certain Rastafarians. I told them clearly that I am a man, that I am mortal, and that I will be replaced by the oncoming generation, and that they should never make a mistake in assuming or pretending that a human being is emanated from a deity.”

I am not a Rastafarian, but I do hold much respect for Emperor Haile Selassie. His words ring true to me when he referred to his speech to the League of nations in 1936: “I spoke then both to and for the conscience of the world. My words went unheeded, but history testifies to the accuracy of the warning….”

Indeed. A timely lesson for us all.