A 40-minute southerly flight takes me over astonishing landscape from Aksum to the remarkable Amhara city of Lalibela. The view of the Simien Mountains, Tekezé River and 200 miles of rugged Ethiopia is amazing. 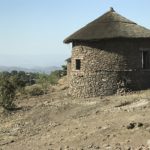 The city of Lalibela is small, about 30,000 people, but one of the most important in all Ethiopia. There are hundreds of rock churches in Ethiopia, but Lalibela contains 11 monolithic churches (built of a single large block of stone). These 12th century churches are carved out of pink volcanic tufa which is softer than granite. As a group, the rock-hewn churches and surrounding tukul stone and grass huts have been classified as a UNESCO World Heritage Site. Ethiopians look upon the entire city of Lalibela as a “sculpture” dedicated to the glory of God. 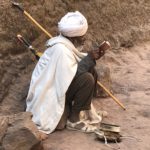 Lalibela is a medieval/post-medieval civilization and Ethiopia’s holiest citiy, second only to Aksum. Unlike Aksum, the population of Lalibela is almost completely Ethiopian Orthodox. Adopting Christianity in the early 4th century, the churches themselves date between 600-1200 AD and are credited to the reign of the Zagwe dynasty king Gebre Mesqel Lalibela (ca. 1181–1221). Lalibela remained the capital of Ethiopia from the late 12th into the 13th century.

King Lalibela is revered as a saint and lived in Jerusalem as a youth, then built a new Jerusalem as his capital after Muslims captured old Jerusalem in 1187. Lalibela even had water systems carved from rock recreating the River Jordan. His goal was to carve ten churches from single pieces of rock to symbolize spirituality and humility. (The saintly king was named so because a swarm of bees is said to have surrounded him at his birth, which his mother took as a sign of his future reign as Emperor of Ethiopia.) 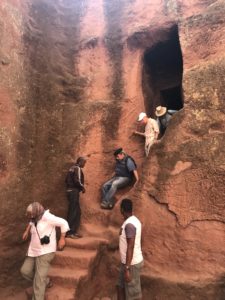 Each of the 11 churches are unique. Each is beautifully carved and many of them are decorated with paintings, some amazingly well preserved. These churches are an engineering marvel! All eleven churches are associated with water (which fills their wells nearby), exploiting an artesian system that brings water up to the top of the mountain ridge on which the city rests. All accomplished before the 1200s! Seeing these rock churches is definitely an “AHA!” moment.

The layout and names of major buildings in Lalibela are widely accepted, especially by local clergy, to be a symbolic representation of Jerusalem. Carved from a single piece of rock, many of these subterranean monoliths are joined by tunnels and trenches, and some have carved bas-reliefs and colored frescoes inside. Richard Pankhurst, Ethiopian historian, noted

“What is special about Lalibela is that it is the site of eleven or so rock churches, not just one – and they are all within more or less a stone’s throw of each other!”

Truly the entire site is an unbelievably impressive experience!

Much effort was made to connect the stories and symbols of the Bible with these churches. Everything has a meaning from the number of pillars to the way a door connects one church to another. Tradition says these churches were completed in 24 years.

Workers chipped away during the day and angels worked all night. Once seen, it is almost believable.

King Lalibela was chosen for greatness. His jealous brother tried to poison him and, near death, Lalibela had a dream about creating this site with the help of angels. It was built at the time that Jerusalem was under Muslim control, so Lalibela wanted to create New Jerusalem. This awesome series of churches is the result. Hundreds of thousands make pilgrimage here each 7 January (Christmas).

Three types of churches are carved in Lalibela. The monolith church is freestanding and entirely cut from one rock. These are not small churches but carved large enough to hold a big congregation. There are four monolithic churches. The semi-monolithic have at least one wall carved free from the rock. The third type is the cave church. All these churches are carved from the softer red volcanic tufa. The carvers first chipped a trench around a central rock then began to work their way up and into the rock. The effect is simply astoundingly!

Unesco identifies 11 rock-hewn churches assembled in four groups. It also has included the unique tukul homes of the area. Up until about two years ago, people lived within these round rock and thatched huts.

The Northern Group has six churches:

• Bete Medhane Alem (House of the Saviour of the World), the biggest monolithic building in the world, is home to the Lalibela Cross, once stolen but now back in the Church. Being my first rock-hewn Church, I am astounded by its carving, decoration, and beauty. Not only did the workers craft the outside of the church, including 72 pillars representing the disciples, out of a single piece of rock, but the inside is equally carved and decorated with huge pillars and vaulted ceilings. Tombs of Abraham, Issac, Adam and Eve are replicated along the walls. 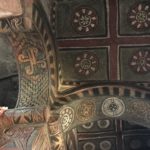 • Bete Maryam (House of Mary) is possibly the oldest, and largest, of the churches, and has a replica of the tomb of Christ. It is inside this church where King Lalibela was to have talked with Christ. A sacred pillar where Christ leaned is only touched by the priest. Each of these churches has the traditional three partitions: area for the congregation, for communion and for the Holy of Holies. The interior is not small. I would think a couple hundred people could cram into this area. The decorations along the ceiling and arches are stunning. Some are painted but most are carved in the rock.

• Bete Meskel (House of the Cross) is across from Maryam. Each church has its own priest who is pleased to pose in his finest robes and hold the cross of the church or display the priceless icons.

• Bete Danagel (House of Virgins) is a small church standing above Maryam. Friday and Wednesday are fasting days for the nuns and priests and congregation. Many are beginning to gather in the churches in preparation for mass which will go on from noon until after 2 pm. 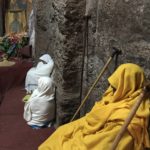 • Bete Golgotha and Mikael (House of Golgotha and Mikael) is known for its art and said to contain the tomb of King Lalibela. This really is two churches with a door carved into the rock to pass from one to the other. The door symbolizes the separation of Christ when Mary first saw him but could not touch him after crucifixion. Women are not allowed past the door into the Mikael Church.

The Eastern Group which are all connected by wonderful tunnels:

• Bete Amanuel (House of Emmanuel) was possibly the royal chapel. It was copied after a monastery outside Lalibela. This is a monolithic church and designed with the traditional Aksumite arches (like atop the Aksum Obelisk) and square posts referred to as “monkey heads.” 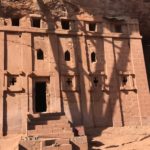 • Bete Abba Libanos (House of Abbot Libanos) is carved because while King Lalibela kept busy, his Queen was being ignored. It is said she tied a string to her king so she could follow him and see what he had been doing for so many years. She discovered the churches and requested this last one to be built for her. It is the smallest of the churches but, with the help of angels, it was carved in a single day. This is a semi-monolithic church where the congregation can encircle the back and sides of the church.

• Bete Gabriel-Rufael (House of the angels Gabriel and Raphael) was possibly Lalibela’s royal palace. This building doesn’t follow the traditional east/west design but instead the altar in on the north wall. The interior is carved with huge pillars and high ceilings with no religious decoration inside. The  drawbridge also points more to a palace than a church. This building is considered to be two churches.

• Bete Lehem (House of Holy Bread) is linked to Gabriel-Rufael and thought to be a royal kitchen and bakery. 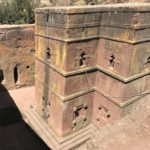 • Bete Giyorgis (Church of Saint George) is thought to be the most finely executed and best preserved of the churches. It is said that when King Lalibela finished his tenth church, he considered himself done. But St. George came to him and complained there was no church for him. Lalibela built this church, his eleventh, to represent Noah’s ark and dedicated it to St. George. Built in the style of a cross, the church is small inside. There is a very old painting of St. George in the corner. This church is the iconic photo everyone wants to snap with its cross carved into the roof. But for me it is the coloring of lichen along its sides that makes it particularly photogenic.

The steep rock walls surrounding these churches have numerous niches and caves hewn into the rock. Many were meant as burial cells. Though access at night is limited, many monks continue to come here and some still use these niches.

Farther away are cave churches like the monastery of St. Ne’Akuto Le’Ab which is built into the rock beneath a giant overhanging cliff from which water is constantly dripping. The water is collected, blessed, and given to the faithful as a health enhancement. In spite of being under a cliff, it’s artifacts and icons are priceless. Services are held here, as they are in all of Lalibela’s churches. 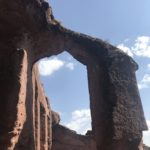 Hidden in the rock, connected with tunnels, below ground level, one could walk past never realizing these priceless churches lie behind the towering red rock. Perhaps that was the point. Jerusalem was in the hands of Muslims, this New Jerusalem was needed as a holy destination for every Ethiopian Orthodox pilgrim once in their lifetime.

I am glad to have had my pilgrimage to this incredibly beautiful and respected Lalibela.