Aksum – Former “Hood” of The Queen of Sheba 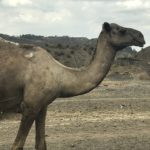 I leave green, fertile fields for dry, barren, rocky Tigray. If there is one thing this region has, it’s rocks: a plethora of rocks on top of rocks used for building and terracing. Oh, and an occasional camel.

Ethiopia’s Kebre Nagast (Book of Kings) recounts how Aksum was the city in which the Queen of Sheba resided as early as the 10th century B.C. It is written that the son of Sheba and King Solomon (Menelik) brought the Ark of the Covenant to Aksum where it remains in a sanctuary to this day. Famous long before the time of Jesus, Aksum was the capital of the Aksumite region, one of the oldest African empires, and acted as a strategic bridge between Africa and Asia for a thousand years.

After witnessing the festival of Timkat in Gondar, I am eager to visit Askum – its ancient buildings, stelae, baths, churches and, according to Ethiopians, the site of the true Ark of the Covenant. Because of the Ark’s presence, Aksum is considered the holiest city in Ethiopia. END_OF_DOCUMENT_TOKEN_TO_BE_REPLACED