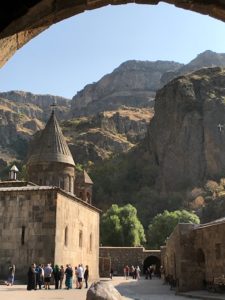 Our first excursion is to Geghard (UNESCO), another monastery. Today promises to be different. I hope so as I may be getting a little jaded about climbing to monasteries. So far I have visited about 1-2 a day for two weeks.

It is said Gregory the Illuminator founded the Geghard Monastery at the site of a sacred spring during the 4th century. Nothing remains of this original structure. What church that does exist was built in 1215 by generals of Queen Tamar of Georgia who pushed out the Turks from this region. A series of chapels were hewn from the rock in the mid-13th century and the complex later expanded to include more chapels, vestry, several caves, large chambers and tombs. It indeed is a special and impressive site carved into and out of the mountain.  END_OF_DOCUMENT_TOKEN_TO_BE_REPLACED