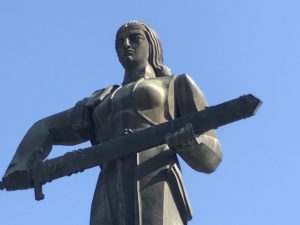 Mother Armenia, all 70‘ of her with admirable superwoman biceps and stern composure, clasps a powerful 10′ broadsword. I suppose there is much symbolism that can be read into her presence: power, country, martyrs of war, victory in peace. I see a monumental female statue of stone warning that when people have lost patience with foolishness, they will find the strength to overcome. She may be  saying, “Hey guys, fail to do what is right, you can be replaced!”

Mother Armenia already replace one guy who failed humanity. A monumental statue of Joseph Stalin, built in 1950, was a victory memorial for World War Two. It has since disappeared from Victory Park, within sight of a kiddie park and its giant ferris wheel. In 1962, 9 years after Stalin’s death, his statue was removed from this high pedestal and replaced by Mother Armenia. You go girl! END_OF_DOCUMENT_TOKEN_TO_BE_REPLACED