Departing Corfu, our hydrofoil arrives into Sarandë after a quick, smooth crossing of the Ionian. It is a beautiful, sunny day and our route will be via SH8, a relatively new coastal road that snakes its way north along the spectacular and relatively undeveloped and unspoiled east coast of the Albanian Riviera. The hills smell of heather and nature and alive with the sound of music: cow and sheep bells, birds and butterflies. And west is the blue, blue expanse of the Adriatic. Olive trees and rustic shepherd shelters dot the hillsides and cows outnumber cars on the road.  END_OF_DOCUMENT_TOKEN_TO_BE_REPLACED
By Pat, 6 yearsSeptember 24, 2016 ago

It is a beautiful 2-3 hour, 85-mile drive over very rough roads to reach a new highway through the mountains. New facilities are being built everywhere, Kostrati Gas Stations popping up like mushrooms, ultimately changing the landscape and culture of the Albanian. Rural Albanians are feeling the change – building of infrastructure and what looks to be modernization of their country to make it tourist friendly. We motor to the historical region of Epirus and its capital, Gjirokastër, situated in a picturesque valley between the Gjere mountains and the Drino River.  END_OF_DOCUMENT_TOKEN_TO_BE_REPLACED 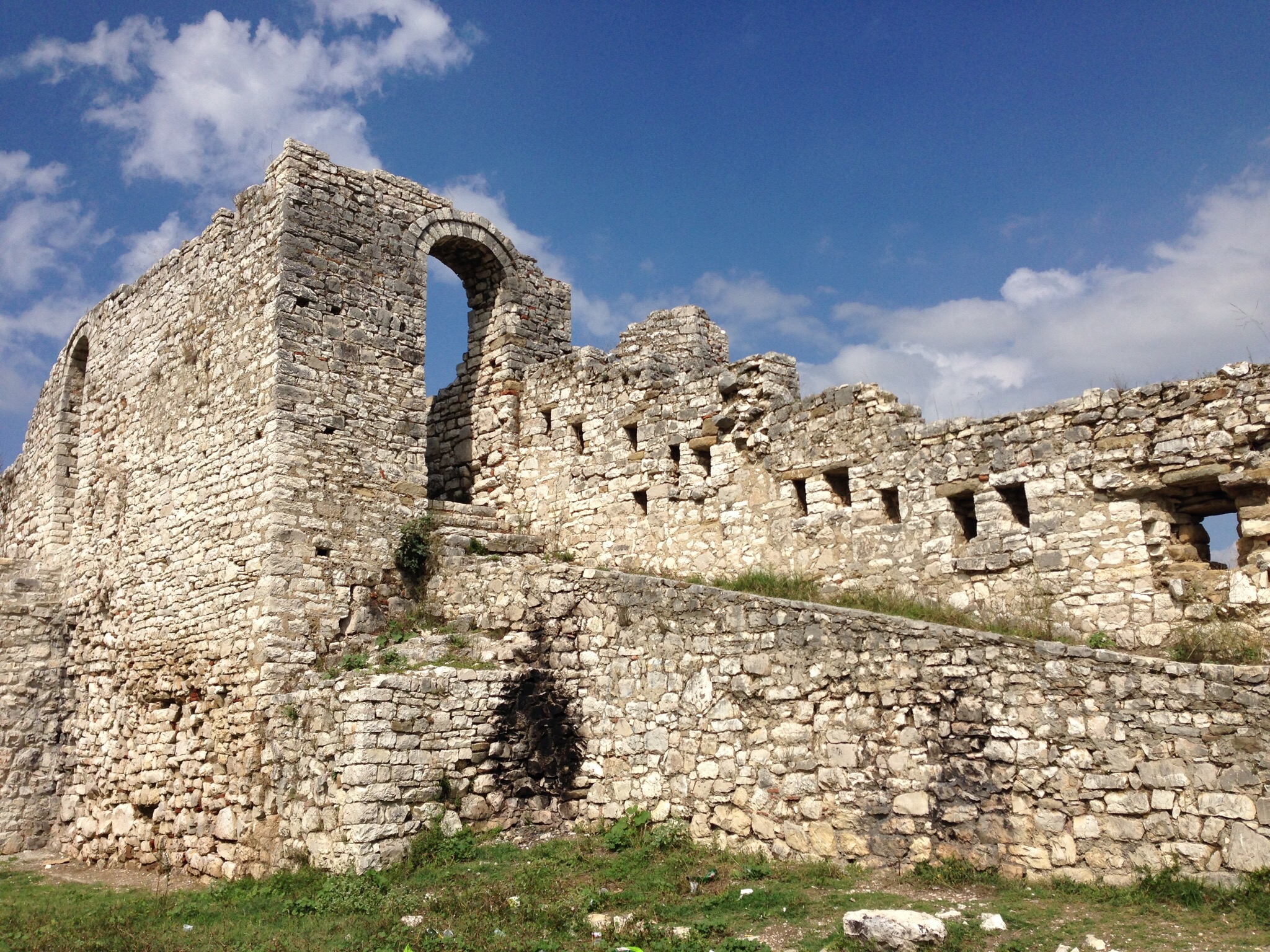 After a breakfast of tomatoes, olives, cucumbers, shepard’s cheese, yogurt and fruit, we motor west to the second largest city in Albania, Durrës, which sits on a lovely bay of the Adriatic Sea. The blue-green seas are calm and beautiful. But we zip past the inviting seas in pursuit of knowledge. Our destination is not the sea and beach but the ruins of the Roman amphitheater. I find consolation that at least the Romans may have been able to stop and smell the sea breezes.    END_OF_DOCUMENT_TOKEN_TO_BE_REPLACED
By Pat, 6 yearsSeptember 19, 2016 ago

END_OF_DOCUMENT_TOKEN_TO_BE_REPLACED

Skanderbeg – one of best general’s of all ages.

Today I am driven south through “rustic” scenes of drying corn fields, herds of sheep, flocks of turkeys, women working fields with large wooden rakes, simple villages, minarets, horse carts and pack donkeys, clearly a simple “peasant” life of a rural Albania. I see more women in traditional clothing but the homes are mostly modern and large. More roadside police are seen. I also see people driving on the right side of the car.   END_OF_DOCUMENT_TOKEN_TO_BE_REPLACED
By Pat, 6 yearsSeptember 16, 2016 ago

Departing our Drin River ferry at Lake Koman, we proceed by the worst “road” imaginable to Shkodër, located on the southern shore of Lake Shkodër. (The story on the road is the government paid to build it – twice. Currently, the pissant politician is enjoying his villa in the south of France and I am bouncing through holes as big as Smartcars and over stones the size of bricks.) Shkodër is one of the oldest and most historic towns in Albania. On the way, I am distracted by dozens of little “turtle shells” along the road and fields. This is a good time to learn about Albania’s love affair with bunkers.  END_OF_DOCUMENT_TOKEN_TO_BE_REPLACED
By Pat, 6 yearsSeptember 16, 2016 ago

When I sailed past Albania in 1972, I was told the ship had to keep a clear birth of its coastline. “They will fire on us,” a Greek shipmate said. Cranky Albania was still isolated, Communist, and anti-social in 1972. I didn’t know Dictator Hoxha had built 750,000 bunkers to defend a country the size of Maryland – that’s a bunker every 40 acres, a bunker per family. All of that has changed, though the bunkers remain. With little fanfare, hardly a glance at my passport, and little more than five minutes and I am in Albania. And for the next 95 miles, I am introduced to what must be one of the most isolated, beautiful, and pristine areas in the world.  END_OF_DOCUMENT_TOKEN_TO_BE_REPLACED
By Pat, 6 yearsSeptember 15, 2016 ago