You can’t be a real country unless you have a beer and an airline – it helps if you have some kind of football team, or some nuclear weapons, but at the very least you need a beer.

GUANGZHOU CHINA, 6:30pm, 30 Sept: I am surrounded by violet passport holders all wanting to get to the head of the line. The rush to the gate is chaotic. The height of civility appears to have been left behind the immigration line in Taipei. The plane pulls from the gate and there are still those in the aisle putting bags away. They bounce up before the plane stops upon landing. I am on hold at the airport awaiting my flight to Kathmandu. There I will enter a new time zone and regain 2 hours and 15 minutes.

Taipei proven to be interesting and enjoyable. In summary:

END_OF_DOCUMENT_TOKEN_TO_BE_REPLACED

A single rose can be my garden… a single friend, my world. 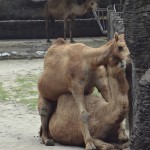 TAIPEI, 1:30pm, 30 Sept: I gave myself a relaxing break Sunday by going to the Taipei Zoo. I like zoos. Not only for the chance to see indigenous animals, but as a point of comparison. Taipei has an excellent zoo. Like most zoos around the world, elephants pose a challenge – big animals in too small enclosures. Otherwise, enclosures were very spacious and well designed. Thousands brought their children for a visit yet there was always room at the rail. And being a senior, I got to see the zoo, and camel fornication, all for free.

END_OF_DOCUMENT_TOKEN_TO_BE_REPLACED

In Search of Taiwan History

I hear and I forget. I see and I remember. I do and I understand.

TAIPEI, 9 am, 29 Sept: I have had a very busy three days in Taipei. Our American education system teaches very little about this part of the world. Practically nothing about Taiwan. Thus, everything is new and I struggle to put this island and it’s people into historical perspective. I have read about China, the Mao/Chiang rivalry, the second Sino-Japanese war and Chiang’s ultimate loss of Mainland China to the Communists. Known as the Republic of China or ROC, Taiwan is not recognized as an independent country by most of the world, having lost its UN seat to People’s Republic of China in 1971. About every president since Eisenhower has visited, but recognition is informal. The PRC is acknowledged as the sole legitimate representative of all China, though ROC would wish the opposite.

END_OF_DOCUMENT_TOKEN_TO_BE_REPLACED

In Search of Chiang

If you don’t know where you are, any road will do. Tibetan proverb SAN FRANCISCO, 12:30 pm, 24 Sept: I have left the Dark Ages of San Luis Obispo via United. For the first time in years I had to do a face-to-face checkin for boarding passes. New Passport? On Read more…