Casablanca is about the size of Malta and is located in western Morocco on the Atlantic. With a population of over 5,500,000, Casablanca is Morocco’s largest city as well as one of the largest artificial ports in the world. Casablanca is considered the economic and business center of Morocco, while the political capital is Rabat.

Berbers settled Casablanca by at least the 7th century. In the early 15th century, the town was a safe harbor for pirates. The Portuguese built a military fortress in 1515 and the town around it was called “Casa Branca” (White House” in Portuguese). Europeans eventually abandoned the area in 1755. With the help of the Spaniards, Casablanca was later reconstructed by Sultan Mohammed ben Abdallah (1756–1790), an ally of George Washington. Then in 1906 the French colonists arrived but when they attempted to build a railway through a graveyard near the port, riots ensued. The French then took control of Casablanca, effectively beginning the process of colonization.

Casablanca was an important strategic port during the Second World War and hosted the Casablanca Conference in 1943, in which Churchill and Roosevelt discussed the progress of the war. It was the site of a large American air base, which was the staging area for all American aircraft for the European Theater of Operations during World War II. Morocco gained independence from France on the 2nd of March 1956.

We booked a private tour with Liz at Authentic Morocco based in Great Britain. After a long walk to the gate (most private tours are not cleared by Oceania to come shipside), we drove an hour to Rabat. It is a rather rainy day and cool.

First stop was the King’s Palace; quite large and ornate with his guards rather relaxed but still blocking entry. Then we drove to Chellah Necropolis, an archaeological site that included both Roman and Berber ruins. Surrounded by dozens of clacking ibis atop the walls, towers and gates, it is an interesting site and just one of many around this old city surrounded with high, red walls. It seemed as if the walls were plastered with a red mud. The city retains a fairly intact set of defense walls, as were the walls around the Oudayas casbah or fortress.

Elaborate door in the casbah.

Much is lost in translation with the guide but words are not needed to enjoy the colors, people and atmosphere of these sites. The homes of the old casbah are whitewashed with bright blue windows and elaborate Moroccan doors in intricate arabesque designs. Colorful hibiscuses are everywhere. We walked by the Mohammed V Mausoleum. Its tile, architecture and square Moroccan minaret are stunning. I love the square style of minaret in Morocco. I’m disappointed we are unable to get inside.

A wonderful lunch of chicken tagine was served sizzling in old wooden bowls. Afterwards, we were driven back to Casablanca along roads lined with police every few miles. Why the security? We arrived in rain at the immense Hassan II Mosque.

This Mosque, the largest in Africa, was built in 1993. Over 25000 can pray inside and another 80000 can crowd the outside court. Its minaret, like all here, is square and the tallest in the world at 600′. Inside the soaring domes and arches are both traditional and modern. The Mosque is built over the ocean and because of its glass floor the ocean is visible. The huge ceiling takes three minutes in order to open to the sky. We did not get past the door but the guards were nice enough to open the huge iron doors for us to look inside. Man is dwarfed by its size.

As I said, I booked our tour thru Authentic Morocco. I loved our wonderful driver Mustapha Elfatouaki. However, our guide Ahmed could not have been worse. I feel he purposely lied to us. First, he was nowhere to be found at the port for the long walk to the gate. Our drivers were fighting with Ahmed because he had changed the itinerary with no regard for us. Our tour included entrance fees to sites yet except for Chellah, we entered none. We were told they were closed or forbidden to enter. Who knows? Ahmed obviously planned to skip the souks in Rabat and take us to a crafts market in Casablanca. He thought the offer to see Rick’s Cafe would placate us. How wrong he was!

Ahmed clearly disregarded the fact that the Hassan Mosque would be closed by the time we returned to Casablanca in the afternoon. This clearly was a huge disappointment. Was this intentional? I feel it was. I expect more of Morocco and its guides. (Update: The guide did indeed run off with the funds, and Authentic Morocco is filing a complaint with the Dept. of Tourism and refunded part of our costs. Obviously, piracy still exists in Casablanca.)

We sail into clearing skies, heading southwest to the Canary Islands in search of canaries. 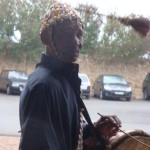 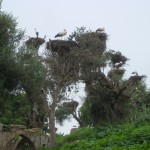 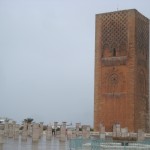 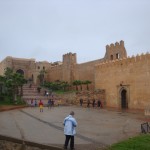 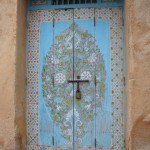 Elaborate door in the casbah. 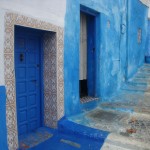 Homes in the casbah. 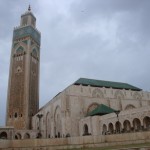 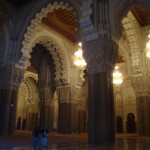