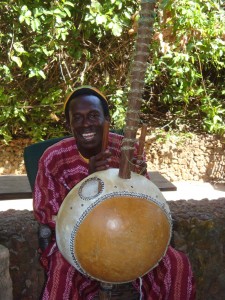 We sail 93 nautical miles to Banjul The Gambia. The Republic of Gambia is the smallest country on mainland Africa, surrounded by Senegal except for a small coast on the Atlantic Ocean in the west. It’s named for the Gambia River but at independence, the country chose to be differentiated from the river and to be correctly called The Gambia. Its size is almost 4000mi² (the size of Connecticut) with an estimated population of 1,700,000. Banjul, the capital, is an island connected to the mainland by bridges and ferries. It is like entering another world, one that makes Senegal and previous ports havens of opportunity and wealth.

In 1965, The Gambia was granted independence from the United Kingdom and joined The Commonwealth. It shares historical roots with many other West African nations in the slave trade, which was key to the maintenance of this colony, first by the Portuguese and later by the British. Since independence, The Gambia has enjoyed relative stability, with the exception of a brief period of military rule in 1994. An agriculturally rich country, its economy is dominated by farming, fishing, and tourism. About a third of the population lives below the poverty line of US$1.25 a day. As I travel about, it looks to me a lot more live below this poverty line. There is no establish state religion, protected by the Constitution, but Islam is practiced by 90% of the population, the majority adhering to Sufi laws and traditions.

We arrived in the small commercial port of Banjul to drumming on wooden gourds, a type of flute, and a stringed instrument creating a joyous sound called mbalax. Everyone appears happy and welcoming. Security is everywhere and Jim and I approach a guard to ask questions. He is Malick the Soldier who wears a pin of his smiling President. He proudly informs us he is here to make us safe so next year we will return with our children. It is heart felt so I don’t point out this ship carries just old farts; it would loose the humor in translation. Malick is the first of many Gambians wishing for our “return next year” when it will be better. He offered to get us a similar pin and his eyes lit when I showed him the Gambian flag I carried for pictures. He represents optimism and pride. More our heartbreak when we exit this port.

Army truck for drive to Makasutu

I easily arranged our tour via email with Christine Azar of Gambia Tours (Christine@gambiatours.gm). We meet our guide Baba and board a Swiss Army truck for our excursion some 30 miles inland. I soon understand our need for a high wheelbase, 4-wheel drive truck. Our tour is to the village of Makasutu and its sacred forest.

Outside port, what exists are the signs of dire poverty seen few places in the world: filth and garbage in the street, homeless sleeping and defecating in public, scrawny stray dogs, broken concrete, no sidewalks, poor roads some unpaved, unfinished buildings everywhere. The numerous taxis hint of certain death with their scrapes, dents, and broken windshields.

But alongside are happy people; endless billboards, many with a smiling President encouraging his people to avoid corruption or join the Orange mobile phone network; people in colorful garb; and messages of hope. The biggest sales efforts seem to be for cell phones, cars, and lottery tickets for a trip to the Haj. All items out of reach for 90% of the people of The Gambia.

We were stopped by police control and Baba effectively argues to get his tourists thru. The driver has all the necessary paperwork. It wasn’t until a couple passengers chose this moment to take pictures that all hell broke loose. Baba argued vehemently that the profession of a tourist is to carry a camera. Meanwhile, the profession of the military was to carry a machine gun and look forceful. Baba finally won the day, no money exchanged hands, and we continued to our destination.

Makasutu Palm Forest is a wonderful change of pace. We see the countryside as we drive onto a dirt track into the bush. Mango trees, peanut fields and subsistence farming surround us. Community wells but few niceties exist for these people. It is a daily life of survival; over 70% of Gambians live in rural villages. Education is not required so none of these children attend school. Polygamy is practiced and a man may have up to four wives. Producing 10-12 children in a single marriage is common and having 40 children is not unheard of. I see no way out of poverty as long as these conditions exist. The people do not raise enough food to feed themselves and fill bags of American rice at the port for distribution. The main cash crop is peanuts; what growth can Gambians sustain with peanuts?

At Makasutu we enjoy a rather threatening photographic session with baboons. Their idea of play is a bit like being on the field with the Packers during practice for the Big Game. Then we board hallowed out wooden canoes for a paddle up river thru dense mangrove forests. It is filled with the sounds of oars, many bird species, the humming of our guide, and the beauty of the nature around us. It’s peaceful floating along. The women harvest clams in the roots of the mangroves and use every part of the tree in their daily lives. No mention what the men do. 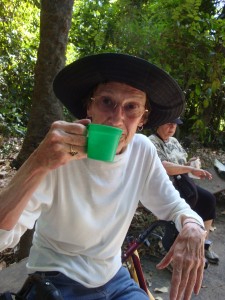 As we debark our canoes, next to the stack of unused life vests, we are happy for the experience and glad we did not have to deal with the brackish water below us. Temperatures have reached the low 90s and the shade of the forest is welcome. On our walk thru the sacred forest, we enjoy palm juice (harvested by climbing the very tall palm trees and attaching a plastic bottle to collect the juice), spot a dead 9′ python (killed by baboons), and visit a very old and wise fortuneteller who is allowed to live in this forest.

We enjoy a cultural dance and music presentation as we eat a good lunch of potato salad just like home and a delicious beef in peanut sauce. It was topped off with a glass of Hibiscus juice, also tasty. No ill effects to the food eaten, so far.

Then a short detour thru a local crafts market, sparse and very poor; one merchant’s tin shed sold only a few packages of glue and cigarettes. Most of these people are desperate for some sales. We did buy a nice set of wooden masks for Judy’s condo.

Returning to Banjul, we drove by Arch 22 (named for the day of the 1994 military coup) and thru the city, past schools (anyone wanting to and able to afford the $2000 a year to attend come here), municipal buildings and markets. It is busy, there are many people with nothing to do, and most of what I see is in a sad state of repair.

We worm our way past containers and fork lifts to arrive safe and sound to our “floating palace.” What we leave behind is a poverty few can understand without seeing. Gambians greet us at the port with smiles and hope. Is this emotion deeper than the surface of their faces? They wish the passengers a happy journey, are polite and gentle, yet we casually leave them with hardly a thought for anything but our own comfort.

“When you come back next year you can bring your children and show them The Gambia,” they proudly say. I know, sadly, few will return and few will give them much thought once we have sailed from this country.