Ghana, meaning “Warrior King,” is about 92000mi² (smaller than Oregon) with a population of about 24 million. Home to over 100 different ethnic groups, it has not seen the ethnic conflict that has created civil wars in many other African countries. The official language is English. The predominant religion is Christian, with 16% Muslim and 9% practicing traditional African beliefs (Animist/voodoo). (For those who may not know, the people of Ghana are not Gonorrheans.)

Trade with Europe flourished after contact with the Portuguese in the 15th century; the British established the Gold Coast Crown colony in 1874. The Gold Coast (Ghana) achieved independence from the UK in 1957, becoming the first sub-Saharan African nation to do so. Today, Ghana is the second largest producer of cocoa in the world; their coastal oilrigs begin pumping next week. However, this resource is privately owned, along with a government cut, so I do not expect this wealth to trickle down to the people.

Along the Gold Coast, the Portuguese, Dutch, British, Swedish and Spanish merchants built more than 80 forts and castles, including Cape Coast Castle and Elmina. The Gold Coast was known for centuries as ‘The White Man’s Grave’ because many of the Europeans who went there died of malaria and other tropical diseases. In 1481, King John II of Portugal commissioned to build Elmina Castle (St. George of the Mine), which was completed in 3 years. The aim was to trade in gold, ivory and slaves. It was the first trading post built on the Gulf of Guinea, so is the oldest European building in existence below the Sahara.

First established as a trade settlement, the castle later became one of the most important stops on the route of the Atlantic Slave Trade. The Dutch seized the fort from the Portuguese in 1637, and took over all the Portuguese Gold Coast in 1642. The slave trade continued under the Dutch until 1814; in 1871 the fort became a possession of the British Empire. At independence in 1957, control of the castle transferred to the new nation of Ghana.

Yaw and driver picked us up at the ship and we wove our way out of another commercial port onto the streets of Takoradi, Ghana’s first deep-water port. Our first stop on today’s tour is Elmina Castle complete with moat and draw bridge. It is difficult to think of these buildings as a “castle” as they really were forts used for the purpose of housing and selling slaves.

Roads are crowded and busy. In villages, markets are bustling as are innumerable small owner-operated shops selling an assortment of foods and services. No traditional store is seen. Homes and shops, many painted in “vodafone orange,” are little more than hovels yet show an industriousness not seen in The Gambia. We pass Blessed Tailors, Queen of Peace vegetables, God in Heaven hairdresser, Holy God Tire Repair, Glory be to God Furniture, and the flash coffin makers. Women elegantly carry upon their heads everything from firewood or baskets of food to water and laundry. The loads look very heavy.

We arrive at Elmina for a tour of the cells, rooms, door of no return, and bastions of this historic castle-fort. The walls are thick and help to reduce the heat, but with 200 shackled men shoved into an unventilated 150-200 sq. ft. room, conditions were awful. The castle is at least five times as large as the slave house on Gorée Island and held more than 1000 enslaved people. Millions were shipped from here to the Americas.

We next drove to Kakum National Park. The drive thru the rural villages is an adventure. Roads are lined with colorful and busy markets, tiny goats nibbling whatever available including plastic bags, school children in their starched uniforms, and the sights and smells of busy commerce. The road traffic is horrendous as our expert driver weaves in and out of traffic, passes pretty much anywhere, and creates three lanes where only two should be. Not for the faint of heart. 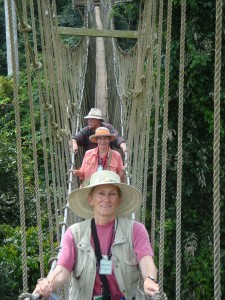 Kakum National Park boasts the longest canopy bridge in Africa. Following a rocky and somewhat steep path into the rain forest, we walk a series of 8 narrow suspension bridges hung in the canopy of trees about 150′ above the forest floor. Made of rope with a 12″ walkway, I make my way slowly and cautiously so as to keep the swing to a minimum. I see no animals except ants but do hear birds, crickets, and what sounds like a howler monkey in the trees overhead. Regardless, it is a fun experience.

We ended our day with a “Mister Toad Wild” ride back to port. As we munched a box lunch, our van dodged oncoming traffic which either got out of the way or we drove off the road to miss them – depending on who drove the bigger car. We rolled into port with time enough to shop.

Shipside, sellers are busy crying out to Boss Lady and Boss Man to buy all sorts of African stuff. Boss Lady purchased another small mask before she boarded the ship and sailed east for Togo.