27 May  – Beograd aka Belgrade Serbia

Driving thru the Dinaric Alps, the fifth most rugged and mountainous area of Europe – one reason Slavs are so tough. The Dinarides extend for 401 miles along the coast of the Adriatic and stomp thru every Balkan country with its highest peak of 8839′ in Albania. Over the centuries many armies fought within these mountains, their isolation and ruggedness providing refuge for those hardy enough to survive them. The history of centuries can be told as we drive thru passes, past villages and over rivers.

Stiv Džobs from my iPad in Serbia

Today the rivers are swollen and raging from a plethora of rain in the past month. Clouds drift amid the peaks and an occasional waterfall is seen. We are again in the State of Republika Srpska, which looks just like Bosnia. It is a poor farming and shepherding economy, some lumbering and mining. But at least, for them, they are Serbs in their own state. Considering the price paid for its formation, it is hard to understand this attitude.

The Dinarics, mostly limestone and therefore slow to erode, consists of jagged escarpments and deep, steep-sided gorges carved by rushing rivers. The meadows are brilliant green accented with tons of garbage dumped along the roads. Sheep, goats and cows, simple farms, solid homes, and miles of forests dot this wild and under populated area. The people of the Dinaric Alps are on record as being the tallest in the world. Just thought I would mention this.

Crossing the Drina River I enter Serbia. The aggressor?

Lunch in Majur near Sabac. Breads and butter are wonderful, soups always good and veal is often the meat of choice. Arrived Beograd, old capital of Yugoslavia now of Serbia. 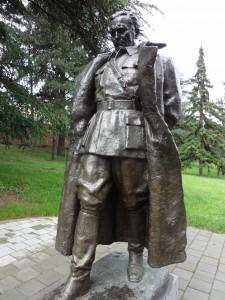 Afternoon lecturer Zoran Janjetovik is excellent. Some points: Kosovo “a matter of Serbs leaving and Albanians moving into Kosovo over a couple centuries” but there is no option discussed other than declaring it Serbian. Austro-Hungarian Empire gave independence to Serbia on condition it build Orient Express thru to Turkey. The new President elected two weeks ago has already traveled to Russia to visit Putin. High hopes expressed by each Balkan country that entry into EU will solve problems but laws, monetary investments, open travel to other countries to work, stability to unite are all needed for acceptance. Unemployment above the official 25% here and in most of the Balkans. Avoidance and denial in Serbia, the wounds are fresh (NATO was bombing Beograd just 13 years ago), and a need for future reconciliation. (Zoran wrote “Between Hitler and Tito”)

Serbia looks the poor cousin of the Balkans. First bad food we have had with pitiful spaghetti dinner. Three times the electricity has gone out – first time I was in the elevator.

28 May – Novi Sad and Fruška Gora in the Vojvodina

I travel to Novi Sad, capital of the northern Serbian province of Vojvodina, located on the banks of the Danube. Breadbasket of green fields in route. Known as Serbian Athens, Novi Sad has a multi-cultural identity with Serbs, Hungarians and Germans being the main ethnic groups. Human settlement in Novi Sad has been traced as far back as the Stone Age (about 4500 B.C.). By the end of the 5th century, Byzantines had rebuilt the town. Novi Sad was later conquered by Ostrogoths, Gepids, Avars, Franks, Bulgarians, and again by Byzantines. And every other marauding tribe passing thru. 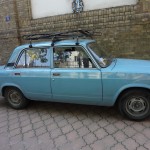 NATO bombed this area during the 1999 Kosovo War and Novi Sad, though unharmed, was left without its three Danube bridges, electricity, communications, water, and oil refinery. Our guide showed us the synagogue now used for concerts (most Jews fled Serbia or were killed, few returned). Novi Sad is clean and busy with lots of pedestrian areas. The catholic church had nice stained glass of the Austrian royal family. I notice many Russian Traube-like Yugos* about and the required numbers broken down along the roads (*Czech car made in Serbia).

Visited Sremski Karlovci, a spiritual, political and cultural center for Serbs, site of 1699 peace treaty between the Habsburgs and Turks. Toured the Serbian Orthodox church. After lunch, a drive thru Fruška Gora was a disappointment. I expected national park but got stories of mosquitos, malaria and views of marshes, green fields, some vines and a section of the Orient Express RR. There was supposed to be a mountain? The slopes of Fruška Gora are known for growing grapes and there are numerous small privately owned wineries producing Riesling, Bermet and Probus grapes. 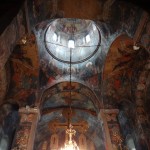 After the fall of Communism, the Serbian Orthodox Church received a bunch of land so thanks to this hospitable gesture, there are over a dozen Orthodox monasteries located on Fruška Gora. We visited Krušedol Monastery founded 1509 – 1516 by Bishop Maksim and his mother Angelina. Burial site for Serbian Kings and Bishops, its interior frescoes are beautiful. Our guide is passionate about the church and that “all peoples are the same here.” The Orthodox are very devoted as sermons are 2-3 hours, done standing!

After a too-long lecture on the monastery, we stopped at a nearby winery for tasting and to see the Honey Bee Museum and a darling cat. The sampled white Riesling and Chardonnay were good. The reds were awful. Honey is always good thanks to a good Honeybee Union. 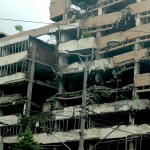 Diplomacy had been tried before the war and during the aggressions, but typical of Milošević, “who knew how to milk two cows at the same time,” nothing deterred him from his mission of ethnic cleansing and claiming the territory of Kosovo. The United States, under Operation Noble Anvil (love those military designations) joined NATO’s military operation against the Federal Republic of Yugoslavia. Just 13 years ago my military was dropping bombs on buildings two blocks from where I am sleeping.

Bombings led to the withdrawal of Yugoslav forces from Kosovo and the resignation of Milošević in 2000. As I bus around Belgrade, I still see bombed shells of government buildings much as they were in 1999. As a symbol of the bully picking on the innocent? The city wants the buildings restored to the original facade but no one wants to invest to do it. I shudder to think if Milošević had not capitulated: the US was ready to deploy a ground force into the mountains and plains of Kosovo. It was estimated an army of 500,000 would be needed to achieve success. After seeing Balkan terrain and resistance, I believe such an intervention would have been disastrous. 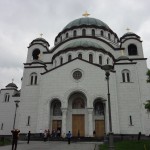 Morning visits included St. Sava Cathedral, uncompleted but meant to be the largest Orthodox church in the world to hold 14,000 – this for a country where few are regularly attending church. “It is being paid for by the state, Serb patriots who have left the country, and Milošević cronies hoping to buy forgiveness.” Should be done in 10 years or so. Personally, I like better the small church in the garden that was built in 3 months and has worked for years as their house of worship.

The House of Flowers was the office of Josip Broz Tito, leader of the Socialist Federal Republic of Yugoslavia, who died in 1980. It is now his mausoleum and also houses an interesting collection of Tito memorabilia and batons from the Relays of Youth. Several rooms display Tito’s gifts from around the world, including costumes, weapons, linens, saddles and more. His mausoleum is on the grounds of his old palace (the one where an ex mistress is buried in the garden?). His wife still lives close by in the family home.

Kalemegdan Fortress dates to the first century AD when it served as a Roman military camp. The fort overlooks where the river Sava joins the Danube, which was why its history is about repeated invasion and war over this strategic point. In its long and bloody history, Belgrade was destroyed over 40 times so several layers of walls originating from vastly different eras from Romans to Turks to Austrian are present. The Turk Sultan Mehmed II lost a war to the Serbs and was sent a silk cord for his efforts, i.e. don’t come home alive. His heart is entombed at the fort and the rest went home to Hagia Sophia. Tough bosses those Turks.

Ate lunch with university students. Comments included: Kosovo is lost and everyone knows it. Politicians will not act to give Kosovo independence. Not happy about just-elected conservative right president, can’t speak English and King can’t speak Serbian. Americans just want the oil and should not be involved in others’ business, which was kind considering both would remember being bombed. “Everyone cried when Tito died” and “I wish I had lived during Tito’s time.” with Tito (i.e. Communists) one could get a job three days after getting out of school, now unemployment very high. One girl is going to Vienna for Masters and because of earlier treaty education for her is free. Want to enter EU but will be at least five years.

Afternoon was sunny and warm, thankfully. If not, my opinion of Belgrade would have suffered. In the rain, the city is gray, Communist functional, and shabby. In the sun, the pedestrian streets, shopping and architecture are quite nice. And there are galleries and museums.

I tried to arrive in Serbia open-minded. Pragmatically, it is hard to get beyond some conclusions. I don’t think the Serbs have learned from or reconciled their history. There is a pride in “We are Serbs” but also a passionate undertone to unite all Serbs. Serbs have centuries of history while Serbia has not. Serbia holds onto Kosovo though most admit they lost it 10 years ago; but the fear seems to be if they give up Kosovo, the Vojvodina will follow. That is unacceptable for Serbia. Although atrocities were perpetrated on all sides over the past century, there is a lack of culpability; the underlying message is “they” hurt the Serbs. I am told 250,000 Serbs fled Croatia in one day, but nothing about what led to it. Serbia denies their part in attacking Sarajevo, but it is all semantics as the JNA controlled by Serbia’s Milošević is proven to be involved. It is like the rump Yugoslavia of 1990s had nothing to do with Serbia. The last opinion poll taken in Serbia before Milošević’s death in 2006 listed him as the third most favorably rated politician in Serbia!

I’m convinced history cannot be ignored nor rewritten in order to blind or fool future generations. The history of the Balkans shows deeply flawed acts perpetrated by deeply flawed people. Everyone can profit from an expression of sincere regret and a move forward to a lasting reconciliation.

The Serbs and all countries of the Balkans, must come to terms with the reality of history if they are not to repeat this fear of and attack on their neighbors every 50 years. In referring to the great sculptor Ivan Meštrović, “he was a Croat, but….” They would “never go to Trieste because it was taken from Serbia. Kosovo is dangerous don’t go there.” We are shown synagogues but most Jews have not returned to Serbia. We are not shown catholic churches in orthodox states and vice versa. The bombed buildings remain in Belgrade after 13 years, almost as a reminder to the people, like the reminders in Mostar to “Never forget 1993.” There is a rawness and passion to Serb feelings – they hold grudges. “We have a war every 50 years.” Rebecca West tried to explain this fatalism, this expectation that another war is just over the horizon. All it takes is another “Nationalist” like Milošević or Tuđman.  No wonder many wish Tito was still alive.

“We must therefore act together as a united people, for national reconciliation, for nation building, for the birth of a new world.