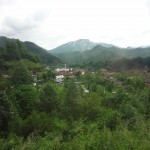 Left sunny Adriatic to enter the Dinaric Alps. Only 8 % of land is below 300′ as I weave through canyons amid mountain peaks between 2000-6000′. Every plot of flat land has a garden or grape vines. What a landscape in which to fight gorilla wars!  Tito marched thru these mountains fighting the Nazis, Ustaše, Chetniks, and Italians with little more than rifles and horses. Here, respect remains high for the partisans. Landscape is rugged and daunting. Bosnia is mountainous primeval forest while Herzegovina coast was denuded of forests used for shipping and naval lumber by Turks and Venetians. Goggle Maps only shows a big white blank dotted with major cities.

Stari Most in Mostar

Mostar, on the Neretva River, is named after the bridge keepers who in medieval times guarded the Stari Most (Old Bridge) over the Neretva. Stari Most was erected by the Ottomans in 1566 on the orders of Suleiman the Magnificent. In the late 16th century, Mostar was the chief administrative city for the Ottoman Empire in the Herzegovina region. The stone bridge is 90′ long and 64′ high and is the city’s most recognizable landmark.

In 1991, Mostar became a divided city between Bosnian Croat forces and the Bosniak Muslim population, with most of the Bosniaks expelled (2 million displaced). During the armed conflict, the bridge was destroyed by the self-proclaimed Croatian Defense Council. Sadly, 70% of Mostar was destroyed, so I hear a lot about what “used to be” and see a lot of mortar shell holes. It is slowly being rebuilt and, fortunately being a UNESCO city, everything must be restored to its original design. This was a culturally diverse area, more so than we have seen elsewhere, with many mixed marriages. However, when the war broke out it was brother against brother. I was told the Bosnians admire President Clinton for his help in bringing peace. Our guide tried to describe the Bosnians as “forgiving” and reconciling but there are signs everywhere pleading “Never forget 1993.”

Between 1992 and 1993, after Bosnia and Herzegovina declared independence from Yugoslavia, Mostar was subject to an 18-month siege. Both Croatian President Tuđman and Serbian President Milošević wanted to divide BiH into their own territories, expelling the minorities, or killing them, whichever came easier. Yugoslav People’s Army (JNA), technically Bosnia’s own military, bombed Mostar in April 1992. The biggest losers were the old monasteries, cathedrals, at least 14 mosques, and practically every home in the city. After the war, the leadership of the puppet state of Croatian Republic of Herzeg-Bosnia was accused of crimes against humanity, including the destruction of the Stari Most bridge. The rebuilding is ongoing, both physically and emotionally. 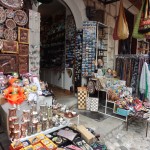 Ate lunch overlooking the bridge then shopped the Turkish-style bazaar. Found some Tito pins. Shop keeper pinned one on my jacket; he was delighted I knew it was Tito’s birthday. English is spoken everywhere and the Euro is preferred.

We passed thru valleys used by the partisans in 1943 as we watch The Battle of Neretva River about the blowing of the bridge at Jablanica and the battle of partisans against Germans, Chetniks and Italians. The terrain is incredibly rugged, some peaks still with snow. Tito’s partisans fought here in January-March; the river is wide and deep thru the valley and one narrow pass existed in which opposing armies met. The fighting was brutal, 1 out of every 9 Yugoslavs died, resulting in thousands of displaced, killed, wounded, or disappeared civilians. No surprise they honor Tito here. More than I can say for the awful acting in the movie.

There is not a country of old Yugoslavia, nor their leadership, not at fault, or charged, of crimes against humanity as a result of wars in the Balkans. The atrocities during the 20th century are hard to imagine and to forget. Many military and governmental leaders are still on trial today in The Hague.  Some, like Slobodan Milošević, died before the end of his trial; Franjo Tuđman died before being charged. One biographer related that Tuđman “had all of Tito’s vices and not a single one of his virtues.”

Crimes against humanity during WWII were partly Croat separatists and partly because a large and universal church wanted to further spread its power, increasing the number of its believers and the territory it controlled. Franciscans, Ustaša (Croatian Revolutionary Movement), and the thousands of religious medjugorie faithful (devotion to Virgin Mary) outside Mostar all took part. There has never been an apology for participating in, ignoring, or encouraging the murder of Serbs (who in turn sought revenge on Muslims in mass killings even Nazi and Italian soldiers abhorred). The church’s answer was the beautification of the then Bishop of Zagreb, Blessed Aloysius Stepinaĉ, an act criticized by many.

Arrived in Sarajevo, most remembered for the 1914 assassination of Austrian Archduke Franz Ferdinand, who no one much liked,  by a Bosnian Serb named Gavrilo Princip, who most Serbs loved – an event that triggered the outbreak of World War One – disastrous for Allies drug into war; creation of a hero here in Sarajevo. The city also severely suffered from the ethnic conflicts following the breakup of Yugoslavia in 1991 and was besieged by Bosnian Serb forces in the surrounding mountains 1992–94.

Sarajevo, along a rushing Miljacka River, is where the Western & Eastern Roman Empire split; where the people of the Roman Catholic west, Eastern Orthodox east, and the Ottoman south met, lived and warred. Historically famous for its traditional religious diversity, adherents of Islam, Orthodoxy, Catholicism and Judaism coexisted for centuries.

A proud ethnically and religiously mixed city thru the centuries, Sarajevo was taken by surprise by the Serb hatred and territorial intentions. What was the ski slopes for winter Olympics in 1984 became Serb bunkers in 1992. Graffiti appearing on the Post Office “this is Serbia,” was next day answered with “this is Post Office you idiot.” “Bosnians look alike and can only be categorized by their name.” Ethnic cleansing via snipper fire based upon your name!

Today Sarajevo, with the second oldest electric tram system in the world, is physically recovered from most of the damage caused by the Yugoslav Wars. It desires to be a symbol of hope for tolerance through multicultural integration. I am thinking the hope is more realistic than the reality. 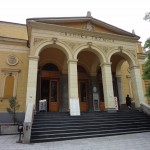 Morning at Markale Market amid artfully displayed vegetables, meats, and cheeses. A second bombing of the market in 1995 took the lives of 37 people (the first in 1994 killed 68) and marked the start of NATO intervention and eventual end to the war. Until that time, the UN peacekeepers were doing little to peace keep.

Our speaker did not want to talk about the Siege. Mohammad only wanted to speak of the rebuilding and hopes for the future. Even so, the future sounds bleak for BiH. He spoke of how the leaders of govt. rotate offices every 8 months among Muslim Bosniaks, Croats, and Serb. BiH continues to be split into three territories based upon ethnicity. He would like country determined by civil govt. Highest office, with ability to veto, is still under UN control. President Clinton and his Dayton Agreement held in high esteem. It sounds as if the Serbs do not want to compromise for a united BiH, which is what started the previous Bosnian War. Claims of Bosnians tracing DNA back to the Illyrians?

Carol and I trotted to the National Museum housing the Sarajevo Haggadah, an illuminated manuscript containing the illustrated traditional text of the Passover Haggadah that accompanies the Passover Seder. It is one of the oldest Sephardic Haggadahs in the world, originating in Barcelona around 1350, leaving Spain when the Jews were expelled in 1492. Its story is loosely told in “People of the Book.” It is tragic but this museum may close because they lack funds to pay utilities, explaining why few lights were on.  Exhibiting a wonderful collection of 2nd-3rd century mosaics, Greek pottery, and Roman artifacts, the museum is across the street from the Holiday Inn where snipers opened fire to begin their siege on Sarajevo in 1992. 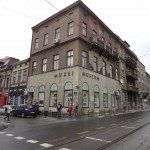 Site of assassination and Princip Museum in Sarajevo

The Siege of Sarajevo is the longest siege of a capital city in the history of modern warfare. Serb forces of the Republika Srpska and the Yugoslav People’s Army besieged Sarajevo, the capital city of Bosnia and Herzegovina, from 5 April 1992 to 29 February 1996. Snipers and artillery shot from the Olympic ski slopes into downtown Sarajevo killing over 11,000 citizens.

After BiH declared independence from Yugoslavia, the Serbs reacted. Their strategic goal was to create a new Serbian State of Republika Srpska that would include territory from Bosnia and Herzegovina. The Serbs encircled Sarajevo with a siege force of 18,000 stationed in the surrounding hills. From there they assaulted the city with artillery, mortars, tanks, anti-aircraft guns, heavy machine-guns, multiple rocket launchers, rocket-launched aircraft bombs and sniper rifles. From 2 May 1992, the Serbs blockaded the city. The Bosnian government defense forces inside the besieged city were poorly equipped and unable to break the siege. The UN embargo kept weapons out of the hands of the Bosniaks but the peace keeping force was useless in peace keeping, being duped by Tuđman and Milošević, and basically watched the genocidal killing of the Bosniak Muslims. Radovan Karadžić, former president, and Ratko Mladić, former Chief of Staff of the Army of the Republika Srpska are both currently on trial for war crimes at The Hague.

On our return to our hotel, we talked to some young girls about a large demonstration. The public workers were asking for more pay. Inflation has been high, rebuilding costly and issues far from solved.

After lunch we bussed to the airport and into the posted Republika Srpska, an independent political entity within BiH defined by Clinton’s Dayton Agreement. We passed several golf courses now large cemeteries, adapted during the war as a way to bury the dead. I walk a section of the War Tunnel, a 800-meter underground passage that allowed the besieged of Sarajevo to get supplies into the city. The ineffective UN held the airport but could do little else. Returned to the city for an excellent walk around the old bazaars, mosque and synagogue (most synagogues are unused as the Jews were either exterminated or fled and never returned to the Balkans). Also stopped at the point along the Latin Bridge where Princip assassinated Franz  Ferdinand.

Wedding at the hotel so we dined at a local restaurant in the old bazaar. Bill Clinton ate there so it must be good, and was.

Much rebuilding is still needed, both physically and emotionally – it just has not been that long since the last gun was fired from the Republika Srpska. My feeling remains: I don’t think they much like or trust each other and eventually the shit will hit the fan. 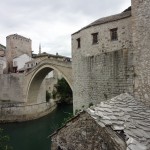 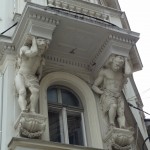 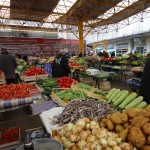 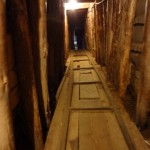